Staff member
Council of Elders
Citizen
If this movie makes bank, they will beg him to come back for a third. And if they think he's seriously ready to quit acting altogether, they may have to give into his demands and let him play fat Robotnik.

I get why he's enjoying this. He's an aging actor long past his heyday, who has incredible talent but got typecast into a shtick that was never going to last. He could have been a serious dramatic actor but Hollywood was more interested in his mutant level of control over facial muscles the rest of us don't know we have. They can hardly be blamed. There are other dramatic actors, but there is no one else with his comedic gift. Along comes the role of Robotnik, who as I've noted can be an entirely serious threat and also a hilarious ham, and frequently switches between his two sides seamlessly. He is an underappreciated masterpiece of a character. This is somebody Jim Carrey can play without getting trapped in a shtick again. He can be serious when Robotnik needs to be serious and funny when Robotnik needs to be funny. If he gets a chance to play fat Robotnik, he can still dance and be fabulous. He can also do a psycho stare like something out of a Kubrick movie. Whatever feels good at the time.

Citizen
The Majestic was the first time I saw Jim Carrey play a serious, dramatic role in a movie, and it both surprised and impressed me at the time to see him actually perform in something that wasn't at all a comedy.

Citizen
If only they took out the whole wedding subplot. But then, when I watched it, the lady got the most laughs.

Citizen
She was a lot of fun.

The whole movie was a blast. And the teaser has me stoked.

Why is this the timeline we live in? The world's on fire, but hey, at least Sonic is cool again? What the absolute hug?

Citizen
It's because someone other than Sega is in charge of the writing. It's been a consistent pattern throughout his lifetime that Sonic Team can't write storylines or characterization for shit, but other people keep proving it can be done.

Citizen
I saw it coming but I was hoping that Sonic wouldn't say the D word when it came to James Marsden. It kinda weirded me out for a bit.

Btw, in the shrine, were the booby traps used actually based on a level in Sonic 1? Like maybe the lava stage (but that was metal surroundings) or the water stage?

Also, why did Knuckles arrive with humans wielding spears? Were they echidna slaves? Where would they even find them?

Fero McPigletron said:
Btw, in the shrine, were the booby traps used actually based on a level in Sonic 1? Like maybe the lava stage (but that was metal surroundings) or the water stage?
Click to expand...

Pretty sure that was Labyrinth Zone through and through.

Citizen
A little here, a little there.


Definitely some labyrinth zone elements, especially in the crystal fans and some of the swinging traps. But there was also a lot of stuff that was pretty standard ruins traps.

I'm actually pretty happy they're not trying to shoehorn overt zones into a real world environment. At least, not yet.

Citizen
I liked it.

Unquestionably a better Sonic movie than the first but not quite as entertaining on its own merits IMO.

Citizen
Saw it today. Knuckles was delightful. A few things I wished:

When 'God Mode' engaged, I was bracing for a hard rock power anthem and not a swelling orchestral score, though I knew it wasn't gonna happen.

Citizen
Here's some much needed laughter.

Penders is going after Paramount. I think the best part is him going about "where the bodies are buried". Like bitch, what are you gonna do when Paramount's lawyers actually come calling. Like seriously, you have no case. This is not Archie. They will eat you alive.

Ironbite-and I will love every part of it.

Staff member
Council of Elders
Citizen
Imagine if this backfires and Penders somehow loses what he still has.

Citizen
Oh it gets better: 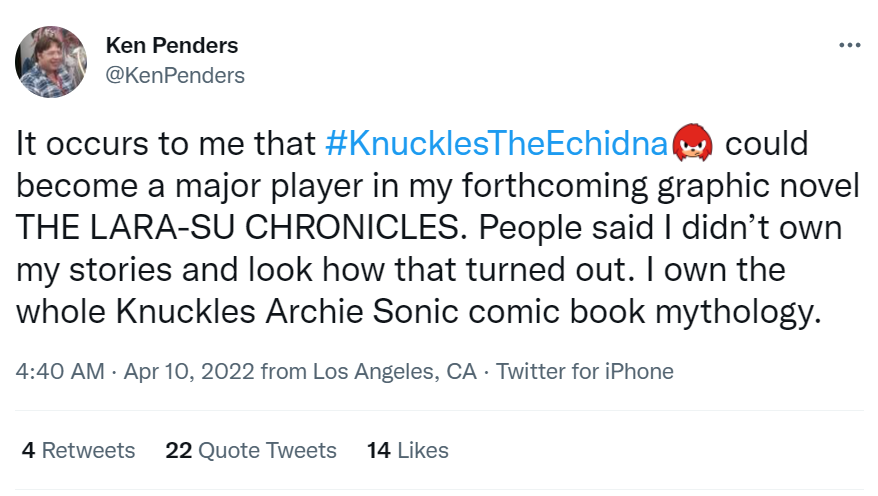 Seems he's gonna set the new standard for F'ing around and Finding out.

Citizen
What the hell makes him think he owns anything named Knuckles the Echidna?
Z

Citizen
*sigh*...Penders is starting another lawsuit, it must be a day ending in Y. I didn't think I'd be rooting for the giant mega-corporation, but here we are.

I guess he thinks he owns "Green Knuckles" at least, since he was talking about selling NFTs with him. How he could possibly own regular Knuckles, even in "Archie" flavor...I have no idea, but somehow this guy keeps winning. I think as part of the settlement, he CAN reprint old Archie Comics issues, but...that's not the same thing as making NEW issues with Knuckles in it and making money off of it, I wouldn't think.

Also, for Aurora's sake, the Lara-Su Chronicles has been "forthcoming" for a decade now. Quit threatening us with your fanfic and just post it already, Penders!

Citizen
He doesn't even have a leg to stand on in relation to the movie!
Yes there is AN echidna who becomes Emerald powered. He is unnamed, shares zero design elements with Enerjak outside of "is echidna" and displays none of the characteristics Penders' villain had.

Yes Knuckles has a dad in the movie. He is unnamed and shares zero design elements with Locke outside of "is echidna". In fact both characters design fits more closely with the Sonic Adventure echidna tribes from the flashback than anything in the Archie comics.

Citizen
To be fair "is Echidna" defines most of Penders Echidna characters. He probably legit can't tell the difference.

Citizen
And to be honest, the whole 'God-Mode' Robotnik is probably closer to a Sonic the Comic reference then Enerjak, since that was a storyline there. Not that it's unique to StC either, as even AoStH had "Supreme High Robotnik" (and honestly would have LOVED Carrey calling himself that) who was powered by Chaos emeralds.
You must log in or register to reply here.
Share:
Facebook Twitter Reddit Pinterest Tumblr WhatsApp Email Share Link
Top Bottom