Citizen
Y'know, I was about to sarcastically point out that Sonic is probably better recognized in the public as a video game character, not a furry icon... And then the picture loaded.

Citizen
Remember kids, you can only have these controllers if you promise to take care of them, clean up after them when they shed, and keep them well groomed on a regular basis.
S

Citizen
Found the Sonic 2 toys 5pk today. My only issue is that since they are all 3in figures, Robotnik just doesn't feel right, but least I got a Movie Robotnik for my Eggman collection.

Citizen
Knuckles wanting to destroy the whole planet feels a little too villain-y for a guy we presume is being manipulated by Roboknik.

Citizen
I saw it. The six-seven really good references doesn't balance out the cringy parts.

Someone should make a cut removing all the bad modern references and just keep the Sonic stuff.

Funny how there's muscle men around.

- the mcguffin
- downhill
- drowning scene
- the acronym
- Tails trademark
- what Robotnik creates
- what Sonic does to beat it
- maaaaybe what he wanted?
- the ending credit reveal
Last edited: Mar 26, 2022

Yes they have, It shows up in a few games, and in the new 'Tailstube' video also comments on his love of them.

Citizen
Sonic Generations is the first time IIRC chili dogs were a thing in something non US-related. It surprised me back then.

Citizen
I looked up Tailstube and also found a video about the Chili Dogs history.


Apparently the Archie comics zero issue started it but Japan lore didn't include it in a game until Sonic Unleashed (as a food item to buy). It wasn't even included in Sonic X.

On the movie, was there an explanation why the owl mom Longclaw was created? Stiiiill such a weird thing for me in the movie.

Also, I hate all the pop culture references movie Sonic makes. Takes away from the universal access if he makes jokes relating to Vin Diesel or Channing Tatum. Someone even makes a Ghostbuster reference. These are aimed at the adults. Game references would have been a bit better, even if I won't get all of them.

Also, were Sonic's warp rings finite? They were, right? I remember something about him traveling from world to world at the start of the first movie then saying better not waste them. Seems like he's wasting some rings here.

Citizen
Sonic liking chili dogs was a thing in AoStH too.

Citizen
And SatAM. It was pretty much started in the western media.

Staff member
Council of Elders
Citizen
I saw a thread where someone followed the official chili dog recipe.

This was the result. 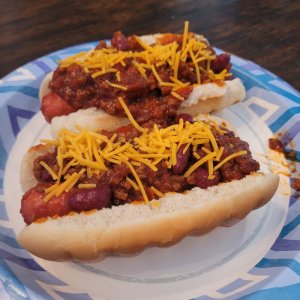 No wonder Sonic likes them.
S

Citizen
We live in a wonderful age when a fictional video game character like Tails becomes a VTuber.

CoffeeHorse said:
I saw a thread where someone followed the official chili dog recipe.

This was the result.

Relies too much on stuff I can't eat, unfortunately. =(
S

Staff member
Council of Elders
Citizen
He was our guy the whole time.

Citizen
Jim Carrey is quitting acting too. So no Robotnik for him for Sonic 3, if they make it.