Powered Convoy said:
Wish he actually had the cartoon colors this time, with gray body and black mane.
Click to expand...

I agree.
Still going to be hard to pass up.

Future_Erika said:
Who's that blue skywarp

The brown Jawbreaker is a new Cyborg Beast named Untite.

The comics seem to have been uploaded in a random order? Can anyone help with the correct order, if I'm not mistaken?

PrimalxConvoy said:
The comics seem to have been uploaded in a random order? Can anyone help with the correct order, if I'm not mistaken?
Click to expand...

Yikes! Randy, ya jumbled all the pics.

So Dark Amber is not an evil clone after all. He's basically a fusion of the legit Lio Convoy and Unicron, reborn together in the former's body as a new merged being.

He has nothing to do at all with the original Copy Convoy from the cartoon.
Last edited: Jul 7, 2022 Pre-order by 8/17/2022 Not available to ship to Quebec, Canada. Estimated ship date subject to change, items may ship earlier or later than anticipated without noticePayment will be collected once item is ready to ship Bring the ultimate Transformers experience to your collection with Takara... So Dark Amber is not an evil clone after all. He's basically a fusion of the legit Lio Convoy and Unicron, reborn together in the former's body as a new merged being.

He has nothing to do at all with the original Copy Convoy from the cartoon.
Click to expand...

Forget this MP repaint give me Bluebolt and Untight Please. Bluebolt especially. I'll take the Airrazor mold as every kinda bird they want to do, and that blue is really nice.

-ZacWilliam, also it does a good job of giving Dark Amber an interesting Wolverine-y feeling personality. Not enough to sell me a black MP repaint but enough that I now like him.

This is set waaaaaaaaaaaaaay after Beast Wars Neo. Even after all of Lio Convoy's multiversal adventures in other universes (like the Japanese Prime toy bios and the Legends World). By now, he goes by "Leo Prime" instead, which is why he's referred to as such in this Japanese comic.

Until we find out what his name really is, the Wiki's defaulting the more neutral spelling of "Untite" (suspecting the "-tite" part of his name may come from "appetite" since he eats corpses).

As for Bluebolt, their gender is not known, as their dialogue is written in a very neutral fashion.

Also, stay tuned for an eventual lettered-in-English version of the comic.


ZacWilliam1 said:
also it does a good job of giving Dark Amber an interesting Wolverine-y feeling personality.
Click to expand...

Funny you should say that, since his Wiki mainpic caption is a quote from the Logan movie.

Citizen
At last, we have a full English translation of the Dark Amber Leo Prime comic, courtesy of TFWiki members Star Spangled Sam (who translated it) and MrRald (who lettered the comic translation).

It is the first chapter in a new series titled "The Transformers: End of G1 Universe", set at the very end of the Japanese Generation 1 cartoon timeline.


But first, a bit of backstory.

At the end of Beast Wars Second, the Predacon Emperor of Destruction Galvatron used his final weapon of mass destruction, the Artificial Planet Nemesis, to extract all of the Angolmois Energy (a wonderous energy capable of great power) from within the Planet Gaia (a post-apocalyptic version of Earth in the far future). However, the observation android Artemis (stationed within a base on the moon) used her own power to move the entire moon within Nemesis's way to disrupt the flow of Angolmois Energy enough to prevent the entirety of it from being fully removed from the planet 100%.

The amount of Angolmois Energy that Galvatron had extracted was then absorbed directly into himself, powering him up for a final confrontation with Maximal commander Lio Convoy, who had likewise powered up to a new form known as the "Legendary Green Lion" by combining the powers of his Energon Matrix with that of his son, Lio Junior, which merged the two into the green warrior in the process.

During this final battle, Lio Convoy used his Matrix to contain all of Galvatron's Angolmois Energy into capsules, which he then scattered across the universe. In the aftermath of Galvatron's destruction, Lio Convoy and his team of Maximals got trapped within a wormhole and went missing for a time. During the time, the wormhole ended up sending Lio Convoy all the way back in time to before the destruction of Unicron in 2005 (as seen in TFTM). According the online manga produced for the Japanese Generations Selects toyline, he apparently took the LONG way to get back home to his time in the future many millennia later.

During this long journey of his to get back home, he popped up on Earth in the year 2050 to help G1 Optimus Prime during the Autobots' and Decepticons' final battle on Earth, in which Lio Convoy channeled his green lion form again (this time without Lio Junior) to defeat an out-of-control Megatron Omega (G1 Megatron's most powerful form of all), whose power was running amok so badly that he could have destroyed the whole planet.

So many millennia later, Lio Convoy finally made it back to the future in Beast Wars Neo, resurfacing on the ancient Decepticon colony of Planet Dinosaur, which Unicron had taken a big bite out of back before his destruction in 2005. Lio Convoy met the Maximal crew of Big Convoy and informed them of Unicron's connection to Angolmois Energy, that it was actually his life energy (which the Generations Selects manga would further retcon to have been an evil, corrupted form of Primus's own energy, but I digress).

In the final episode of Beast Wars Neo, Lio Convoy made it back to Cybertron to help Big Convoy defeat the resurrected Unicron once and for all. While Lio Convoy battled Unicron (who had assumed the appearance of Galvatron) in his green form, Big Convoy destroyed the planet-eater for good with his Matrix Buster cannon. In the aftermath of the battle, both Lio Convoy and Big Convoy were offered to become Great Convoys (the leaders of Cybertronian goverment) by the God of Cybertron, Vector Sigma. While Big Convoy declined the offer, Lio Convoy accepted.

After this, Lio Convoy became an elder known as "Great Lio Convoy". He then continued to have adventures in other dimensions across the mutliverse, particularly in the TransTech world of Axiom Nexus (in stories written by Fun Pub for the Transformers Collectors Club), in the Japanese Transformers: Prime toy bios (in which he went by a new name: "Leo Prime"), and finally in the Legends World of the Transformers Legends manga (in which he continued to use his "Leo Prime" name). At the end of Legends, he departed the Legends World to parts unknown, which FINALLY brings us to this new comic.

So much time has passed since the events of Beast Wars Neo. By now, the universe is dying. After many body upgrades across his multiversal travels, Lio Convoy is now back in his original Beast Wars Second lion body, but is still known by his "Leo Prime" name and is thus referred to as such. In fact, it is so far into the future that he is now dead, his body a lifeless corpse, which brings us to where the comic begins: 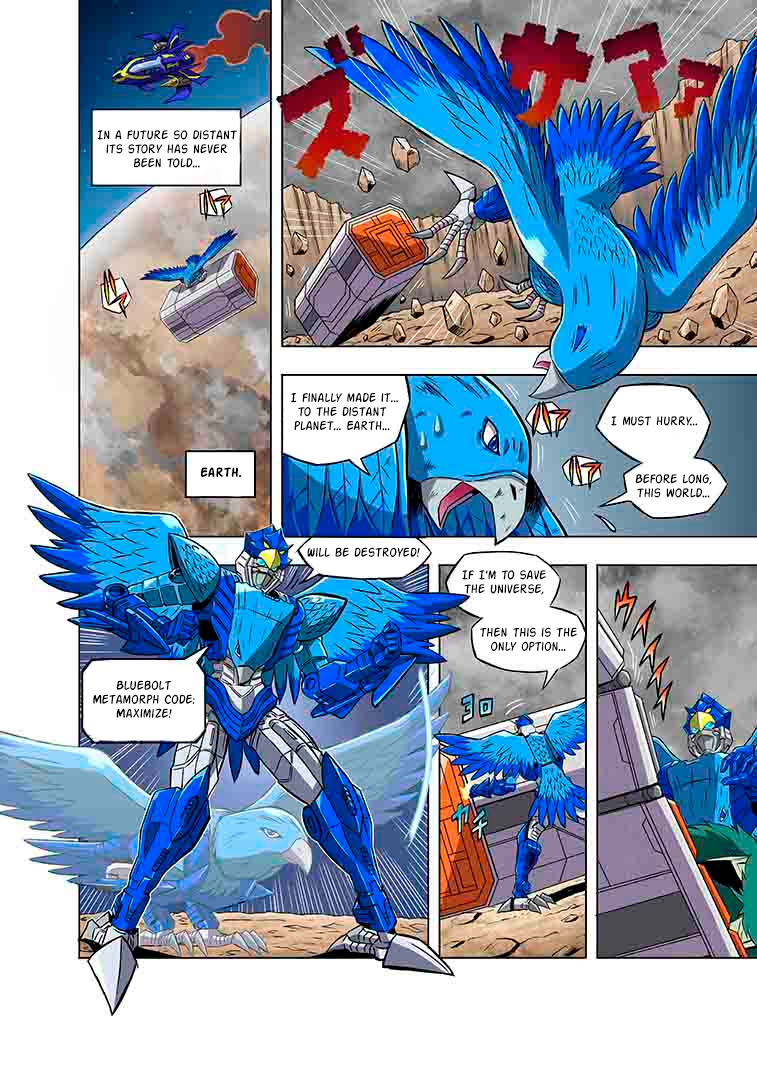 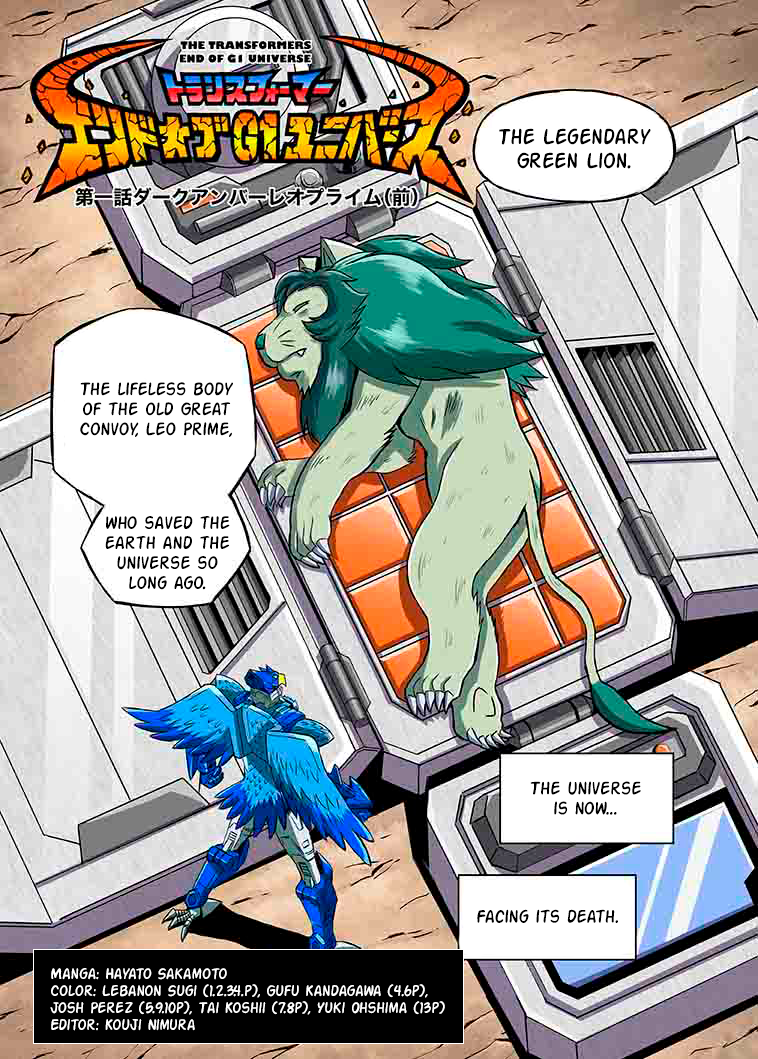 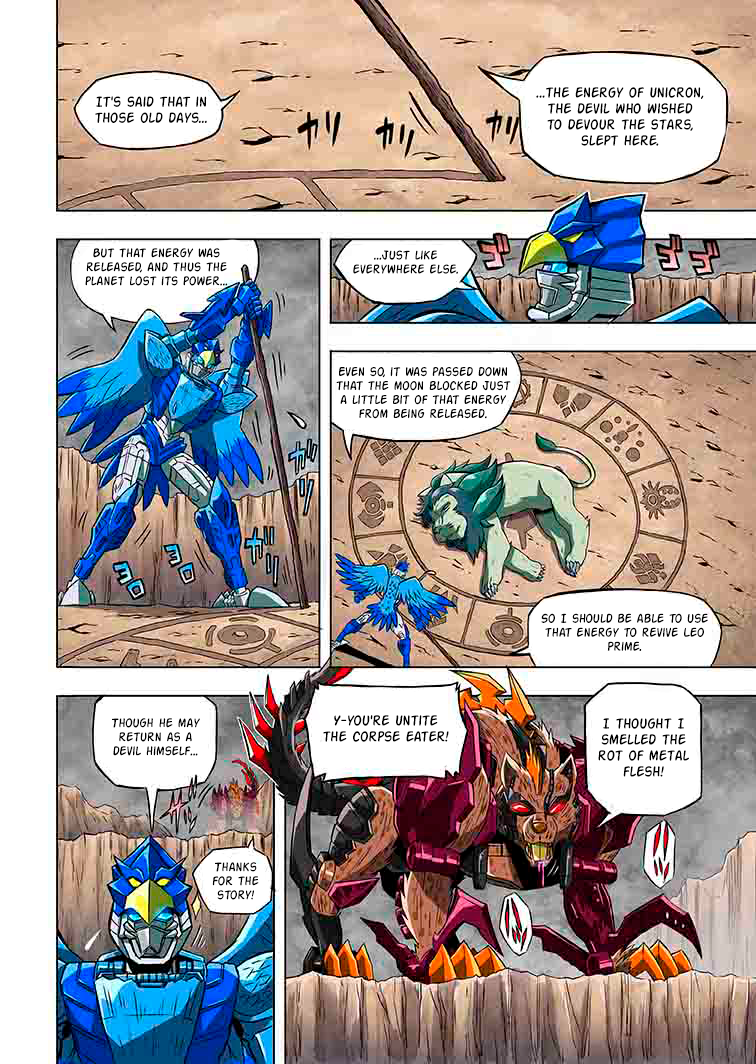 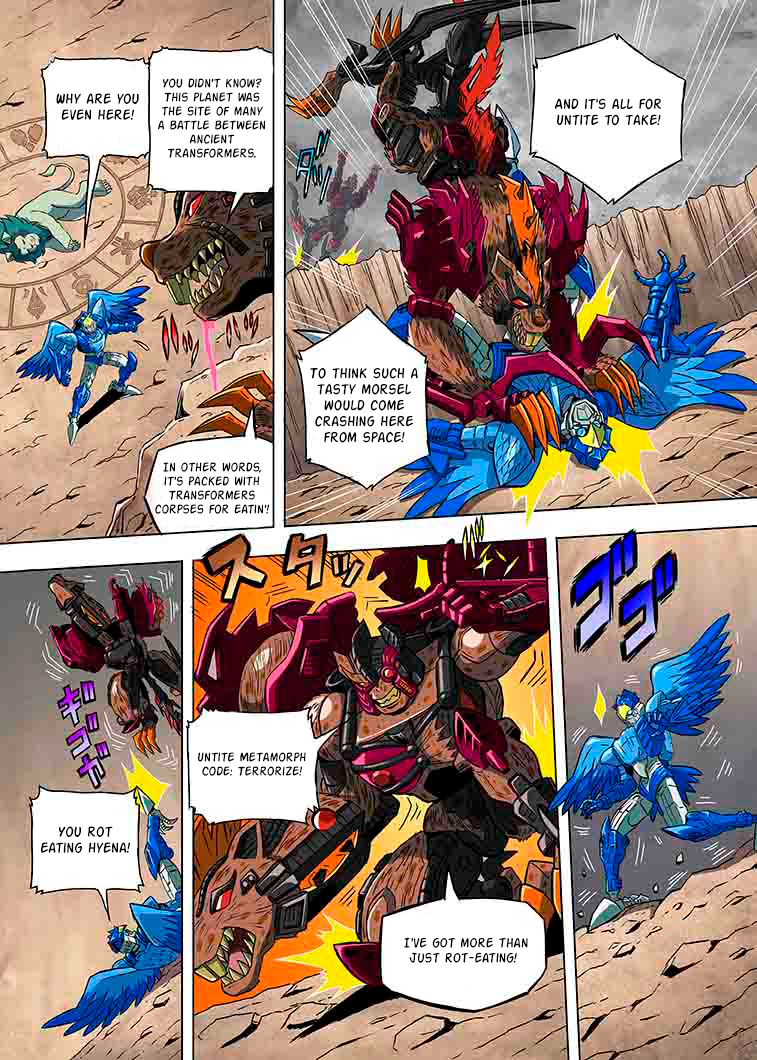 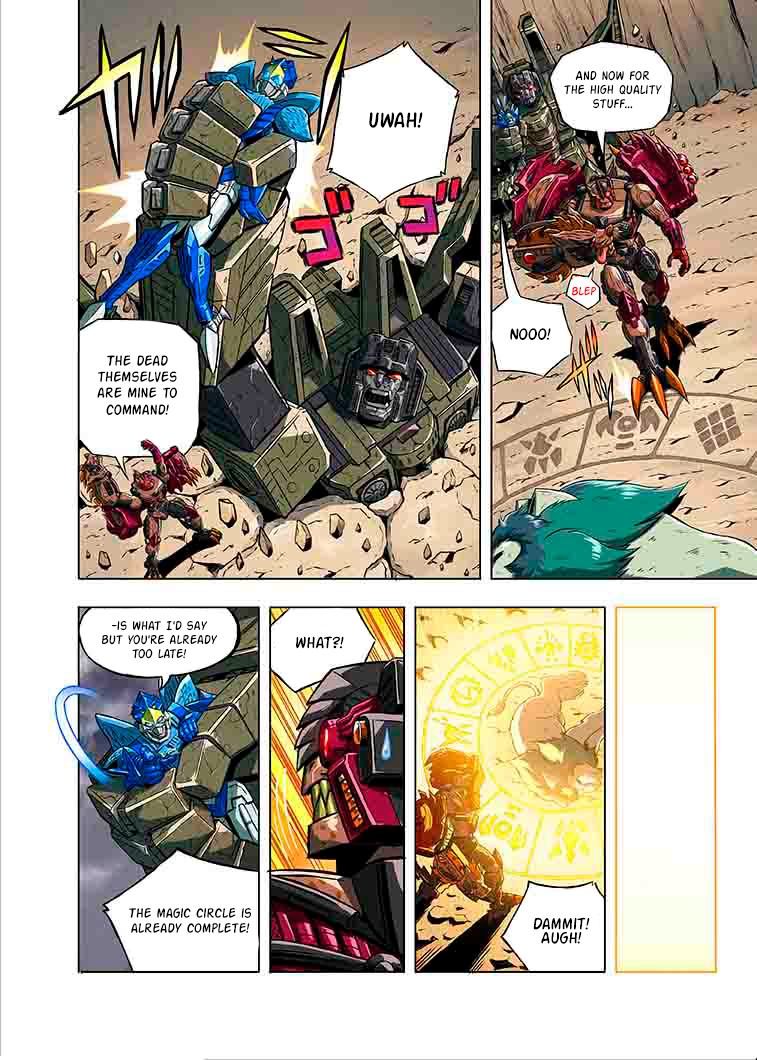 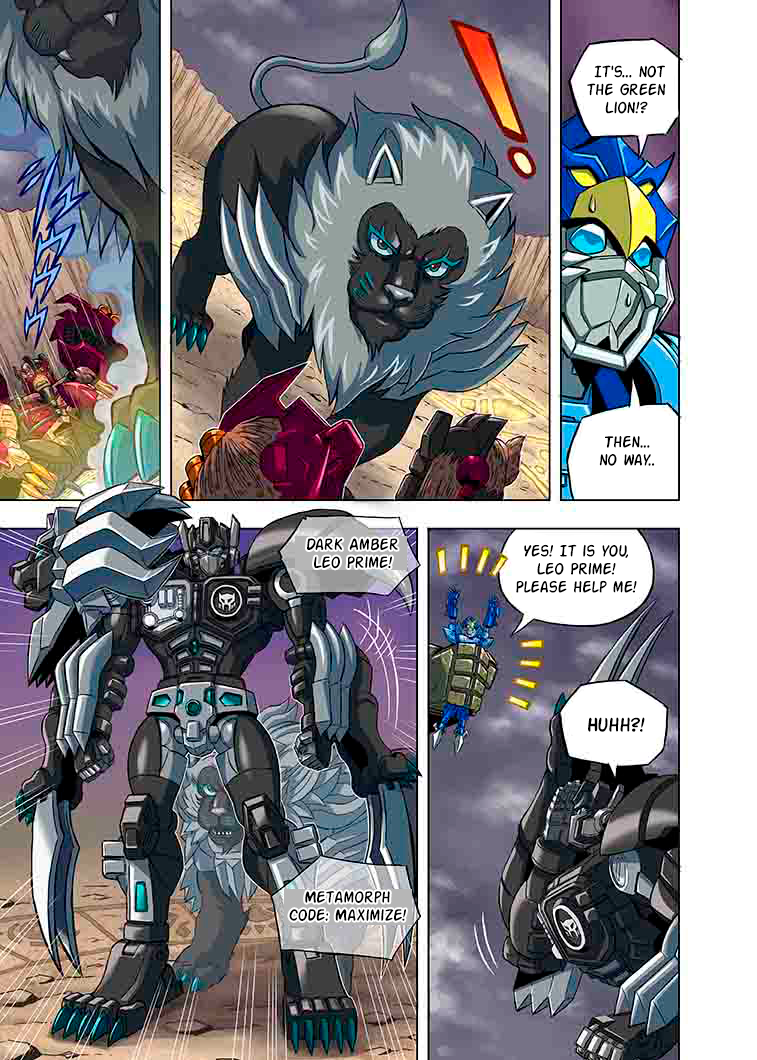 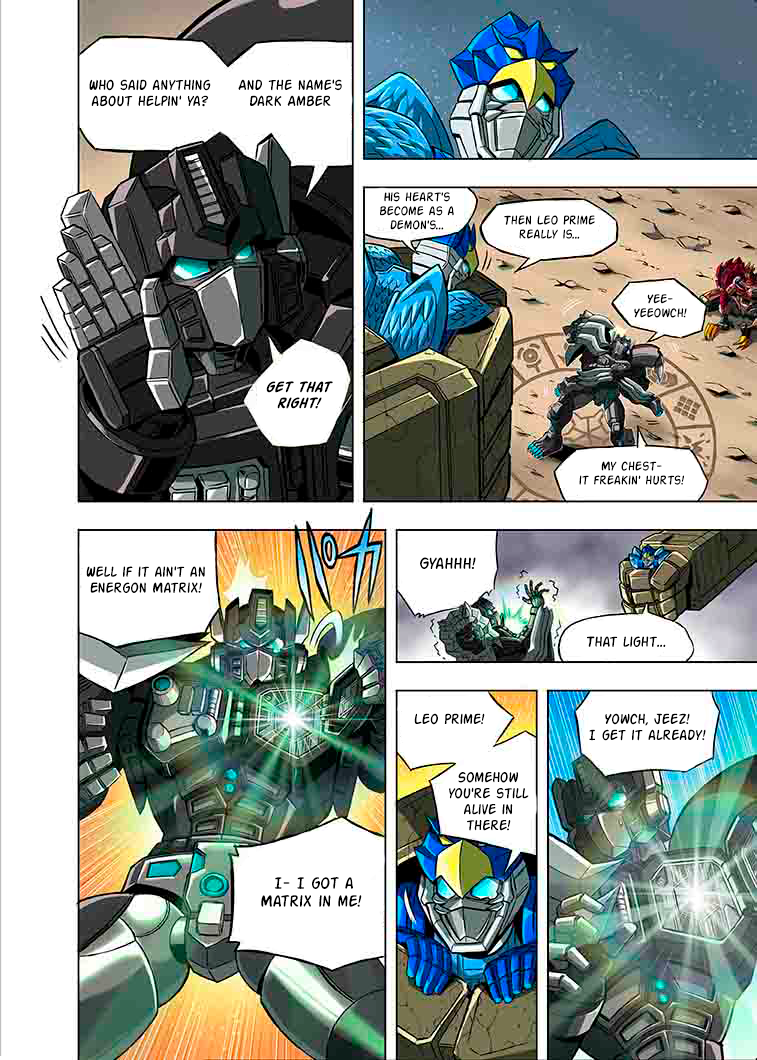 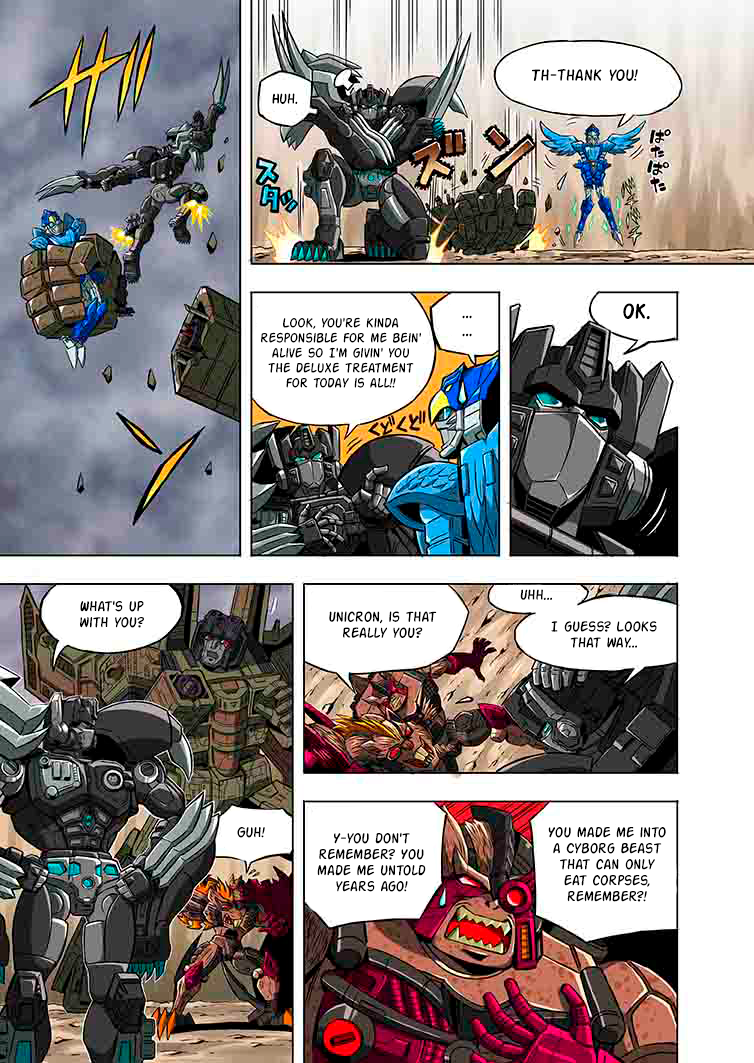 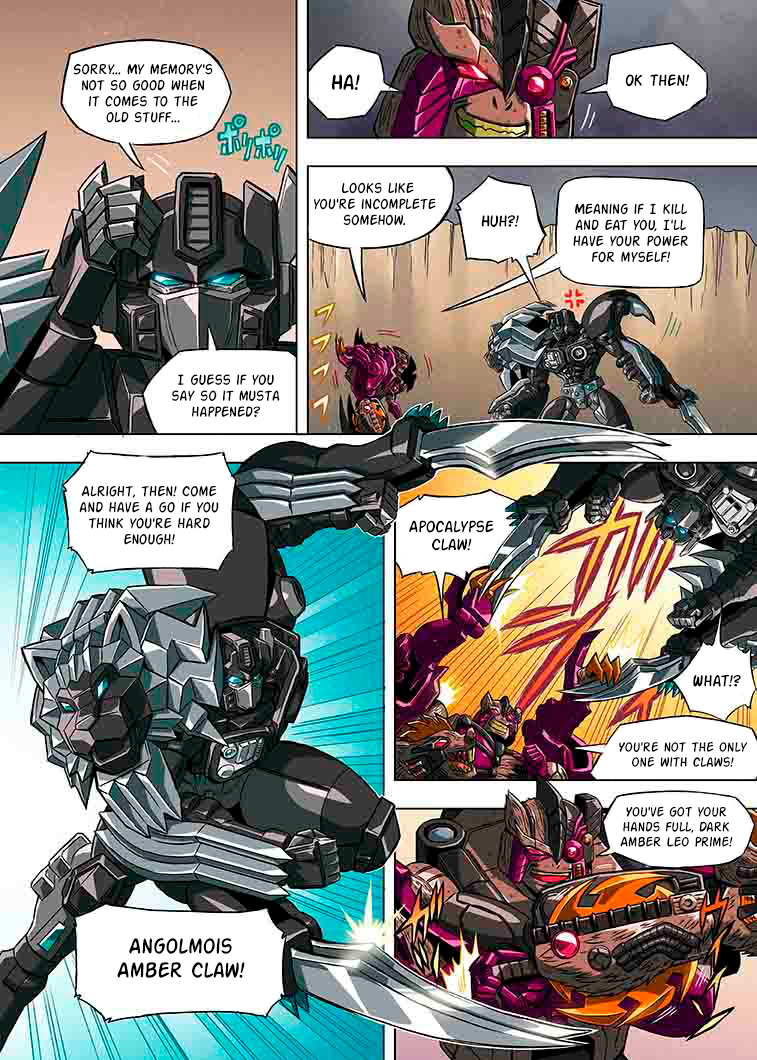 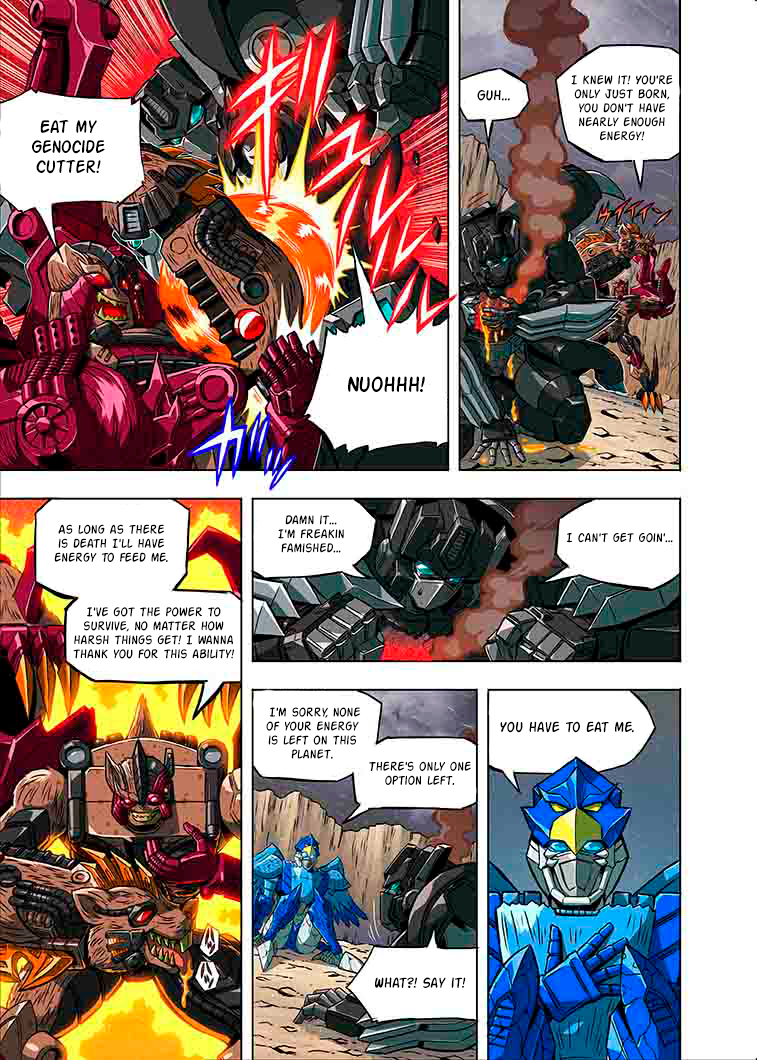 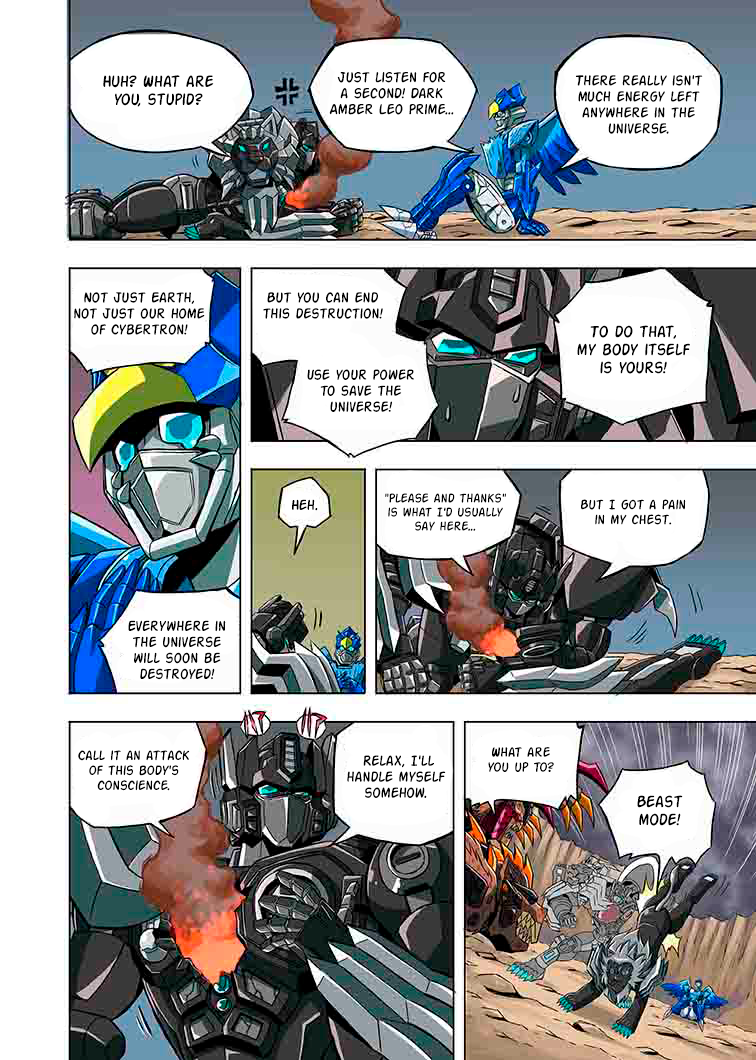 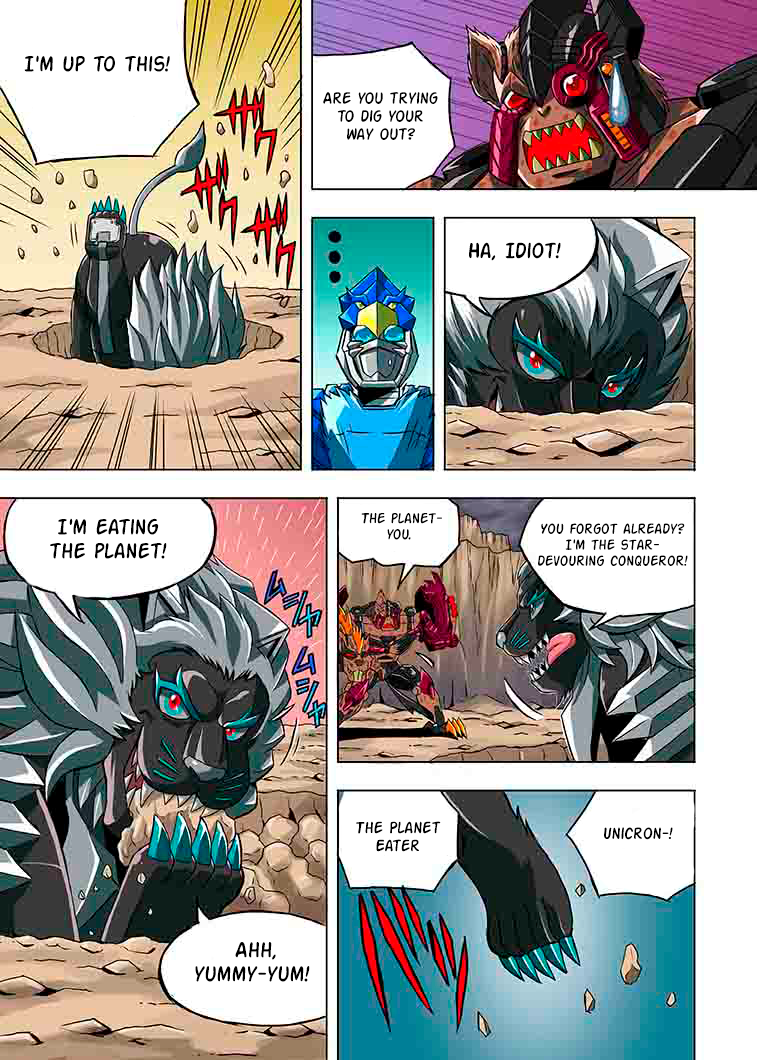 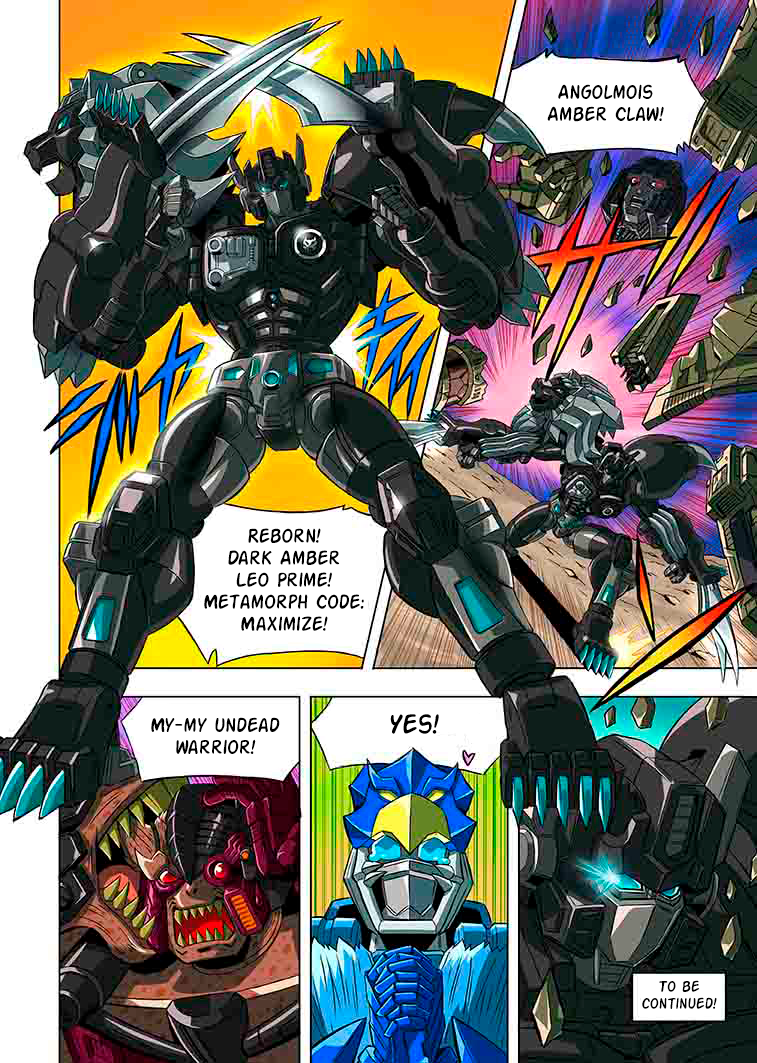 The whole "Metamorph Code" thing is... interesting. See, where the Maximals and Predacons say "Maximize" and "Terrorize" in the English version of Beast Wars, they instead both say "Henshin" in the Japanese version, "Henshin" being a Japanese word for "Transformation". In this comic, both the English and Japanese transformation codes are used for the first time ever, giving us "Henshin Code: Maximize" and "Henshin Code: Terrorize". And since characters with vehicle modes still say "Transform!" in Japanese series like Beast Wars Second and Car Robots, and say it in contrast to those with beast modes saying "Henshin", "Metamorph" is used here as a translation of "Henshin".
Last edited: Jul 12, 2022

Citizen
A second comic for Dark Amber Leo Prime, part of the "End of G1 Universe" series, has been posted to TakaraTomy's website. TFWiki member Star Spangled Sam has translated it into English, and MrRald has lettered the comic with Sam's translation.

It is the second part of a two-part story, so if you haven't seen the first comic yet, scroll up top to the post of mine directly above this one to read it first. 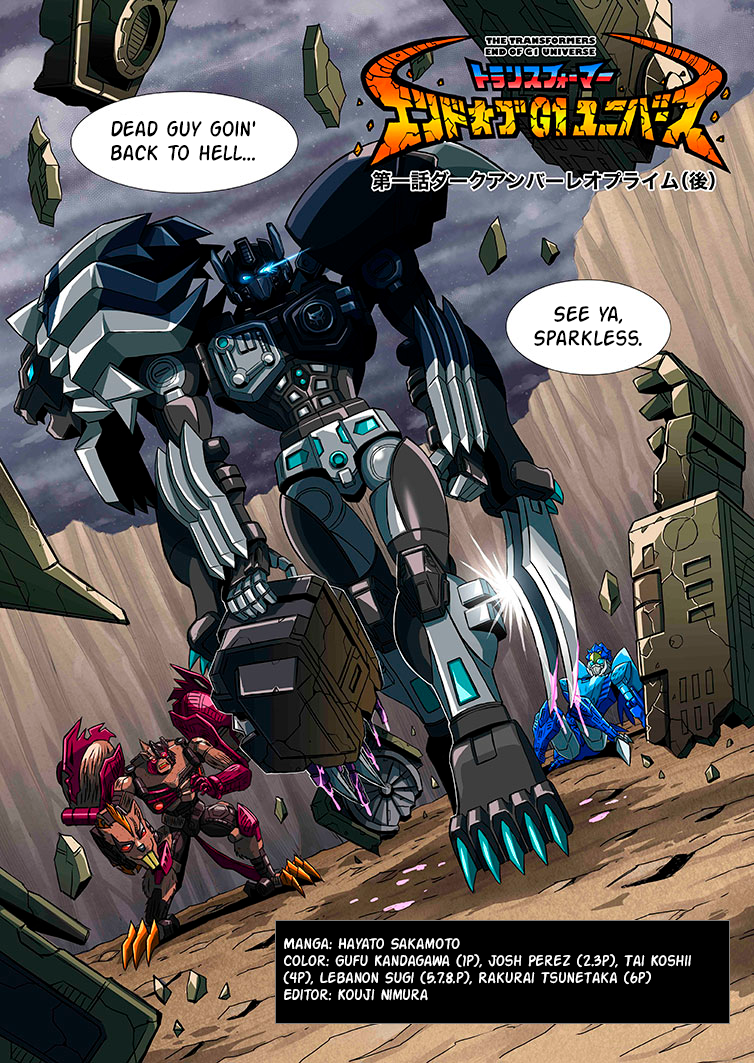 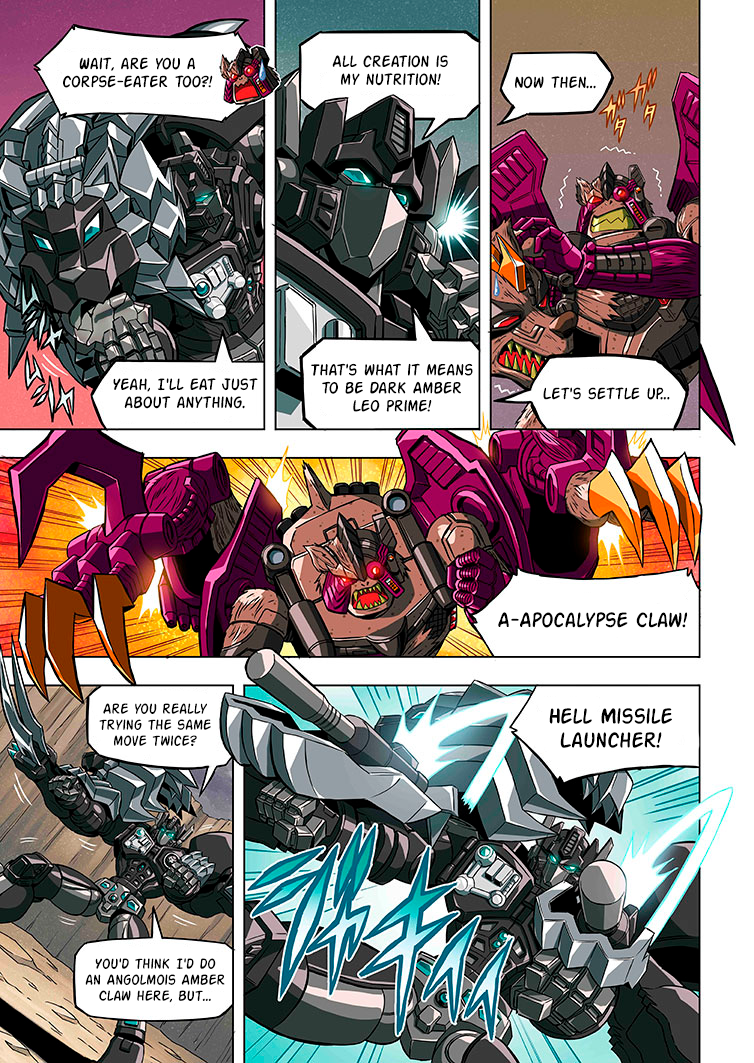 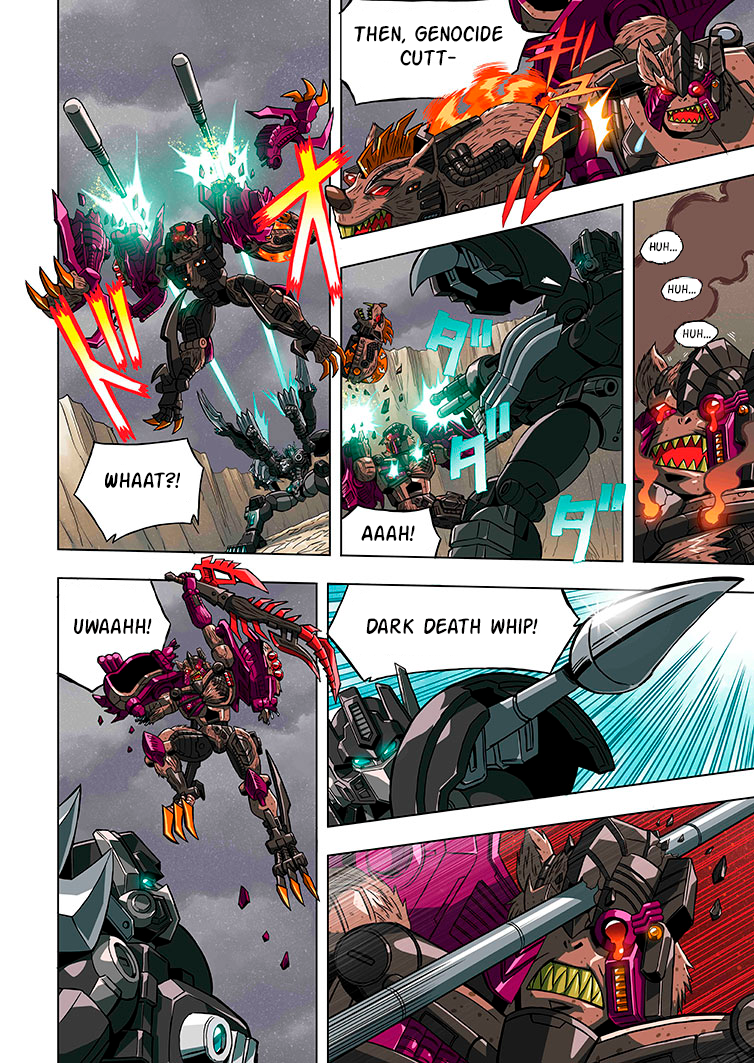 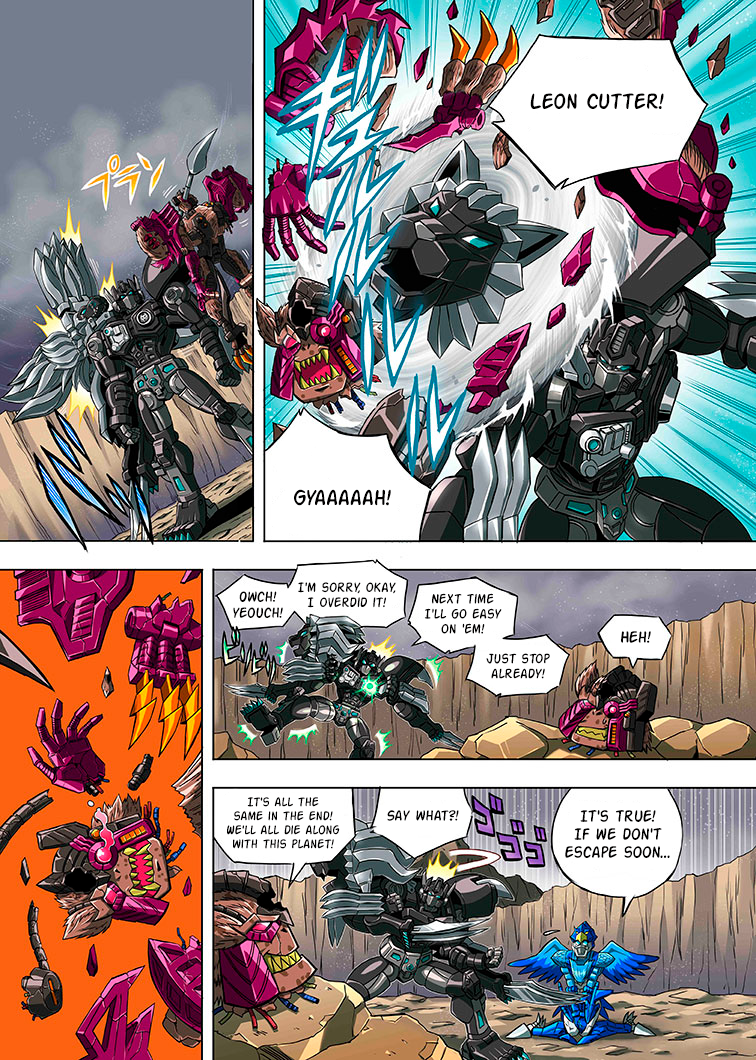 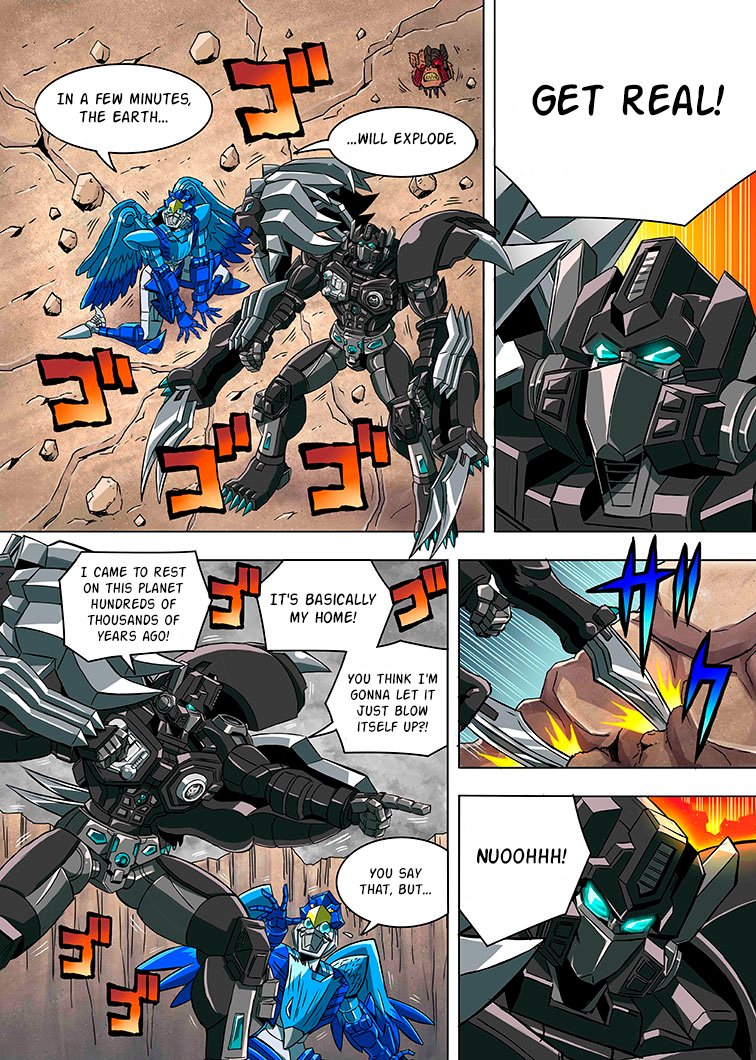 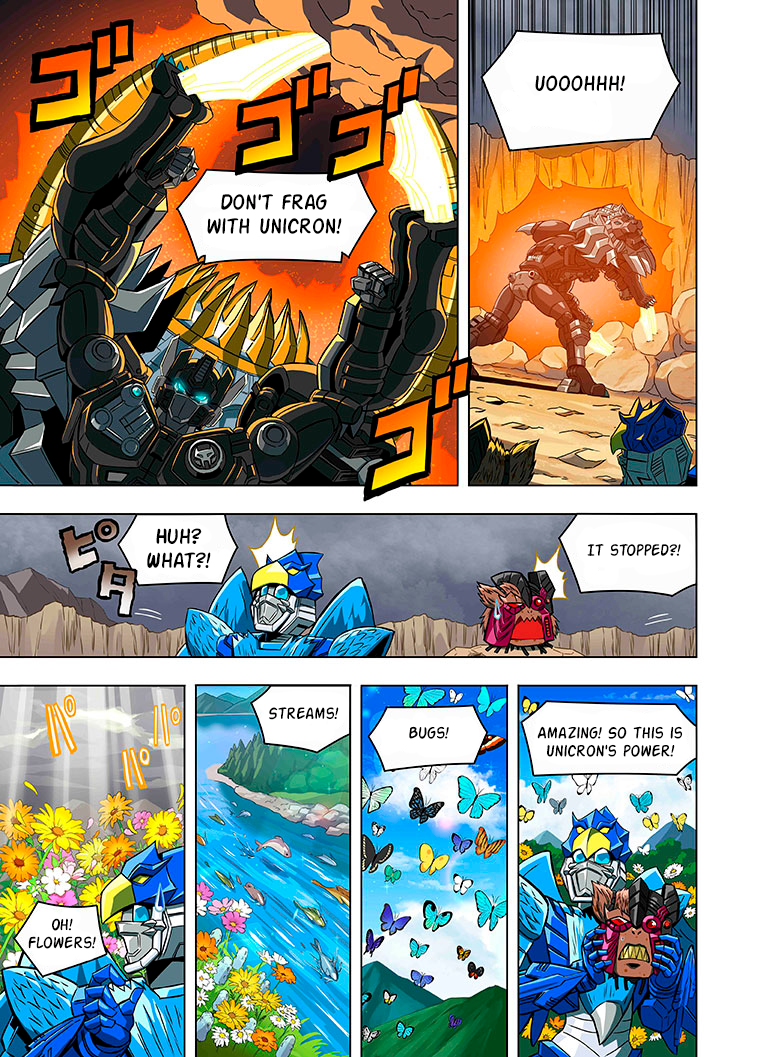 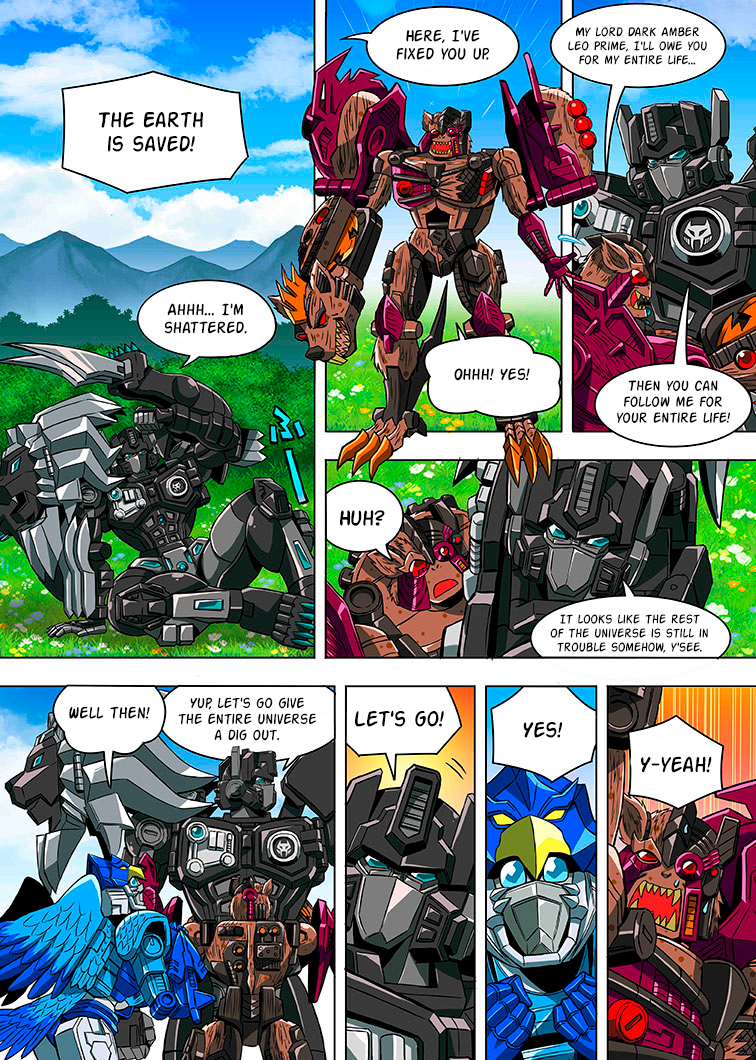 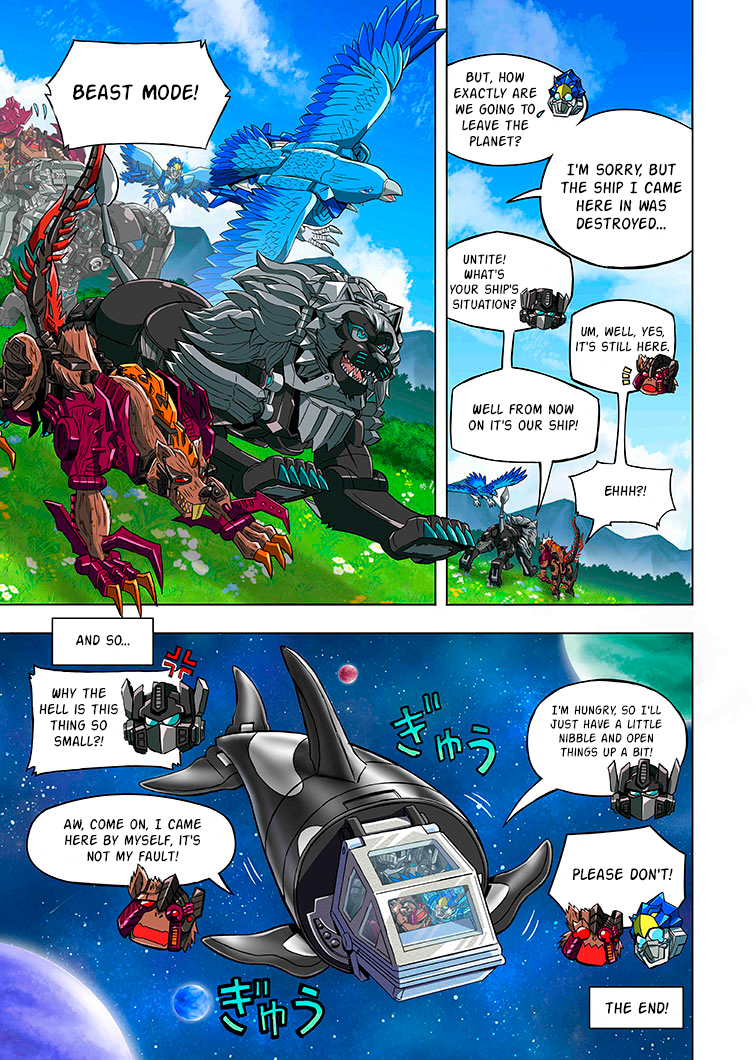 Citizen
I'll be very cross if I don't eventually get toys of Blue and Tite.

-Zacwilliam, of course that would make me want DAL Prime who I don't want to want...

Citizen
So…Unicron is saving the whole Universe because he’s jealous he didn’t destroy it? Or is this like a Tankor/Rhinox fusion thing with him and Leo Prime?

Citizen
It'll always sound so silly when a translation will force in "transformers swearing" into the script.

MrBlud said:
So…Unicron is saving the whole Universe because he’s jealous he didn’t destroy it? Or is this like a Tankor/Rhinox fusion thing with him and Leo Prime?
Click to expand...

The Matrix is making him be "good" like Starscream at the end of the G2 comic.

-ZacWilliam1, it shocks him when he over does it with untite

Citizen
That was the dumbest TF story I've read in a while. It's a good thing I don't consider most of the Japanese comics (like this) canon.

-ZacWilliam, I'm hoping we get more like this from TT soon.

MrBlud said:
So…Unicron is saving the whole Universe because he’s jealous he didn’t destroy it? Or is this like a Tankor/Rhinox fusion thing with him and Leo Prime?
Click to expand...

He both is and isn't Unicron. Think of him more as a new thing made from both.

And it's rather consistent with what Unicron's power has been shown to be capable of. Back in Transformers: Energon, Alpha Quintesson managed to harness the power of Unicron from his dead body to recreate all of his planets that Unicron had devoured years ago. Of course, when he was finally revived later, Unicron himself was none too happy about his power being used in such a way.

And, as was revealed just two years ago, the Angolmois Energy of Unicron in JG1/JBW is actually Primus's energy, which Primacron had corrupted (after trapping Primus in the body of a primitive) and used to create Unicron.

We now have confirmation and official images of Masterpiece Movie Series Starscream Revenge Ver. based on the character’s famous “tatoo’d” look first seen in Revenge of the …

Glad she uses the yellow stripes of the original Diaclone and not the red of the BotCon figure (guessing that was a Lanny choice).