Citizen
Oh yikes, I missed that.

MrBlud said:
Yeah, for as great as TakTom usually does with facesculpts (including Siege Skyfire) those all look soft and pretty awful.
Click to expand...

Faces are quite accurate to the animation, for better or worse. I think the sculpt is good. 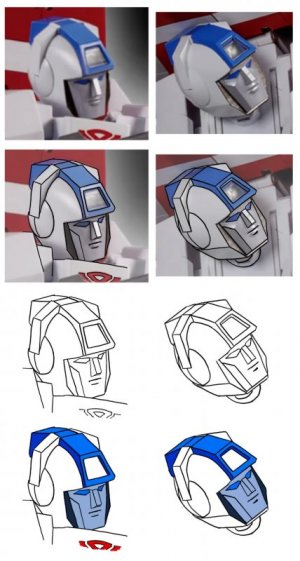 Citizen
I think the problem is similar to that with MP Bee - the paint softens the features enough that it makes him look soft.

Citizen
The second row of pics in that collage look the best. 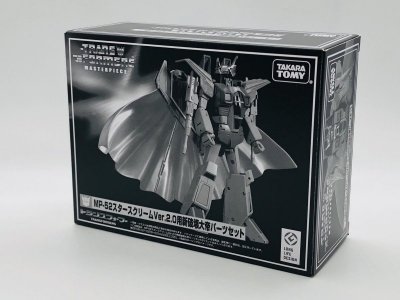 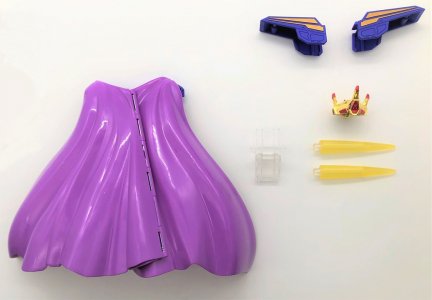 Staff member
Council of Elders
Citizen
My Shouki showed up today thanks to the glories of amazon.jp.

Citizen
The stickers in the Japanese magazine aren't anything to fret over, as I'm sure Toyhax will release something similar.

Citizen
TakaraTomy sent Wotafa a sample of MP Skyfire. This is one impressive figure. The transformation has a lot of little things that elevate it. Gimmicks are great, despite there being some issues (no face plate on this sample and part of the backpack is missing or unable to transform completely). He looks gorgeous.

Staff member
Council of Elders
Citizen
I'm very pleased with how different this looks from the siege version. and the way the wings transform is just elegance.

Powered Convoy said:
TakaraTomy sent Wotafa a sample of MP Skyfire. This is one impressive figure. The transformation has a lot of little things that elevate it. Gimmicks are great, despite there being some issues (no face plate on this sample and part of the backpack is missing or unable to transform completely). He looks gorgeous.

Now THIS is how we know YouTubers like Wotafa are legit, as he stated several times that he got the figure from Takara Tomy AND he flagged his video as being a "paid promotion" (as he received promotional material from a company to review).

THAT'S how we can tell that the likes of "CrimevsCrime" and "Shiftytron" aren't reviewing legitimately procured goods, and why I'm still a fan of Wotafa; He's a legit YouTuber and TF reviewer who gets on with simply reviewing toys (without personal stories or stuff that ages badly) in his videos.

I hope TT and Hasbro start doing this more. They should give out more free samples to legit YouTubers in this way, so that the genuine YouTubers get those "first blood" views and hopefully, subscriptions.

Citizen
There is a teaser pic out there for MP Black Lio Convoy.

Sabrblade said:
There is a teaser pic out there for MP Black Lio Convoy.
Click to expand...

Citizen
Wish he actually had the cartoon colors this time, with gray body and black mane.

Citizen
So I watched Wotafa vid and at the same time messed with my Siege Jetfire
And my conclusion is still this...Siege Jetfire is still god damn impressive and has a ton of play features such as the titan fig compatibility. and the extra armor and guns I'm very happy to own it

Powered Convoy said:
Wish he actually had the cartoon colors this time, with gray body and black mane.
Click to expand...

I am baffled, baffled, about the toy's new name and backstory that not only have nothing to do with Copy Convoy, but also invent a whole new series of events that we've never seen or heard of before that led to the birth of this "Dark Umber/Amber Leo Prime".

The residual Angolmois Energy from Unicron is concentrated and compressed in the Earth's crust to become jet-black dark energy, and fused with the sparkless body of the legendary green lion, Leo Prime, to create the fated Prime, the Dark Amber Leo Prime.
It transforms from a jet-black lion into a robot.
It is a recolor item of the long-awaited MP-48 Lio Convoy, given a new character setting and becoming an even more attractive item. Its heroic modeling in the popular standard villain color is perfect as a collection item.

Studying this bonkers backstory, here's what I've come up with for how any of it makes sense:

1. First, it refers to Lio Convoy as "Leo Prime", a name the cartoon version of the guy took on after BW Neo during his appearances in Fun Pub's TransTech stories, the Japanese TF: Prime toy bios, and the Legends manga. So this new MP bio would most likely be set at some point after BW Neo.

2. The bio says that this guy was born from residual (as in, leftover or remaining) Angolmois Energy within the Earth (A.K.A. Gaia) converging together and fusing with the "sparkless body of the legendary Green Lion: Leo Prime". The only time Lio Convoy ever turned green was in his original BWII body. But by the time he starts going by "Leo Prime", he acquires several new and different bodies instead. This leads me to suspect that, somehow, he loses his original BWII body and it gets left behind on Gaia before he acquires the first of his new "Leo Prime" bodies.

3. According to this bio, apparently not all of the Angolmois Energy originally found on Gaia was completely sucked out of the planet by Nemesis, so there was some left behind and that is what merged together with Lio Convoy's old body.

In conclusion, the events of this bio are most likely set at some point after BW Neo, wherein Lio Convoy loses his old body on Gaia, upgrades to a new one and goes off to have his multiversal adventures as "Leo Prime". Then some leftover Angolmois Energy reveals itself on Gaia, merges with Lio Convoy's old body, and becomes this new "Dark Umber/Amber Leo Prime" guy. 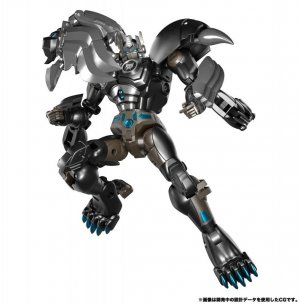 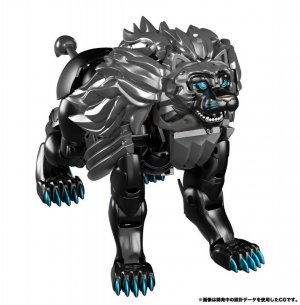 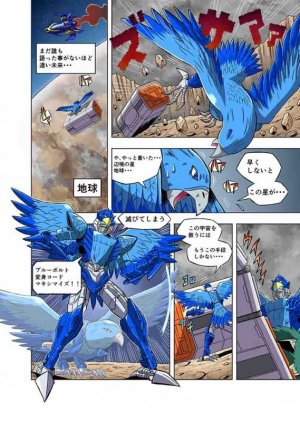 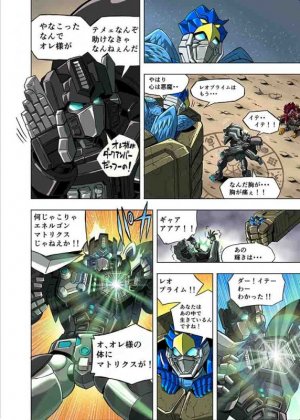 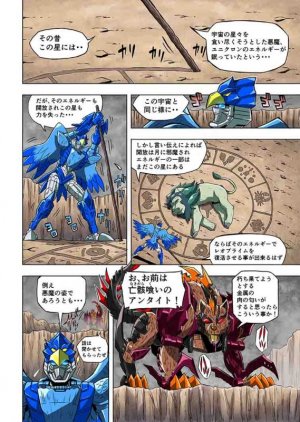 Citizen
Who's that blue skywarp