Citizen
It's going to be awfully difficult for Quebec to enforce limits on gatherings in people's private home, so I suspect the majority of people just aren't going to listen at this point. I'm not even going to bother pondering whether that's the right or wrong thing to do at this point. I'm as sick of these restrictions as anyone, and I wasn't even an overly social person prior to COVID. I mean, we're coming up on 90% of eligible people vaccinated, and still facing restrictions because of a handful of morons? But as I live alone, it's relatively easy for me to follow the restrictions without even a conscious effort. I can't stand in judgement of people who've just had enough and don't have it as easy as myself.

One thing I did indulge in this holiday was to go out on the last day of work with a group of friends from work. Everything closed up early, and so we were able to get out to a restaurant and still enjoy a couple hours before the 10pm last call and 11pm close. It was the first time I'd felt legitimately human in 20 months, and I wouldn't take it back.

Quebec's curfew is something else, and (as far as I know) wholly unique to them among North American jurisdictions. Nobody seems to like it, and experts don't seem to think it's even going to accomplish anything. Personally, I think Legault is walking a dangerous line with his populace. All I can say is that I hope Quebec's restaurant and hospitality industry survives this latest round of restrictions, even though government support is now pretty minimal.

I saw in some translation of Legault's most recent address that he was saying we have a responsibility to protect the unvaccinated from themselves. That's magnanimous of him, but personally I don't feel the same way. I'm entirely willing to sacrifice them, at this point. Any adult who remains unvaccinated by choice has made that choice for themselves, and is usually pretty happy to boast to you about it.

Citizen
I agree with you whole heartedly. In fact: I've been saying that they should have implemented the requirement for the vaccine passport for grocery stores, gas stations and the liquor commissions for months now. It's ABSOLUTELY your choice to get vaccinated: but if you want to actually participate in society...

Enforcement is once again the problem, and is a major problem in quebec in general. The restrictions were poorly enforced the first time, and this new round largely smacks of "Look, we're doing something!" as opposed to actually useful, which would have required them doing something a full month ago.

Citizen
It's the end of 2021, it's been a shiny new year full of hope and promise for three and a half hours, but right now I'm trying to decide exactly how betrayed by my own country I should feel.

2021 has been a terrible year in Australia, more of the year has been spent in hard lockdown than not.
My home earned the regrettable distinction of being the most locked down city on Earth, with a "short, sharp" "seven day circuit-breaker" lockdown dragging out to three long months.
Three months of not being allowed to leave your home, except for the four accepted reasons, under threat of police action.
(Not to mention any of the other lockdowns we suffered through this year.)

This has all been in aid of keeping case numbers to the lowest possible number (zero was the achievable ideal for the longest time) and to "flatten the curve."

Now, throughout the spend, spend, spend holiday season, the narrative has shifted. Now we're told we shouldn't pay any attention to the thousands of new infections being diagnosed daily (5,919 new cases recorded in my state today.) We're told "Australia can live with this virus" by Prime Minister Scott Morrison.

In New South Wales health minister Brad Hazzard was quoted five days ago “We would expect that pretty well everybody in NSW at some point will get Omicron."
Thank goodness I don't live in NSW, but the point still remains at some point in the very recent past Australia, formerly the shining beacon in Covid management, just rolled over and f-ing gave up.

I haven't been spending my lockdown days at home, attending Zoom meetings and binging on Netflix, I've been out there, boots on the ground every day as an essential services worker fighting to maintain some kind of normality for people.

I try not to think about it in the moment, but I know I take my life in my hands every day when I'm out there amongst people who refuse to keep a reasonable distance and think wearing a mask under your chin is appropriate protection, people who are over it all and think that if you're fed up the rules don't apply.

It feels like I, and everybody in my position, have spent the last two years fighting in a war against an invisible enemy. And now, after twenty two consecutive months of fighting Charlie up in the trees, I've come home to find Charlie has bought out my industry, Charlie is my new supervisor and I should learn to adapt to how Charlie does things because that's just the world we live in now.
Australia will just have to live with Charlie.

Part of me still wants to believe the worst of it is behind us, that the new year will bring new hope. But, a more realistic part of me observes how out of control the situation has become over this summer and that when the weather cools down again things are just going to be unmanagable.

Living with this virus, accepting that we are all destined to get sick regardless of whether you're fully vaccinated, on your first, second or eighteenth booster, putting wealth ahead of health feels like we're back on the path to yet another lockdown. And I'm still waiting for the last one to have been worth the pain it caused.

Shattered Trousers said:
It's the end of 2021, it's been a shiny new year full of hope and promise for three and a half hours
Click to expand...

Y'know, for a minute I forgot about time zones, and this was the best summary of the past year I've seen yet.

The Mighty Mollusk said:
Y'know, for a minute I forgot about time zones
Click to expand...

Yes, mine is a message from the future! The far-off future of January first, 2022!
ooooooOOOOOOOOooooooohhh!

Well, I just got my third Covid vaccine booster shot. I can feel the communism coursing through my veins!
Click to expand...

Why aren't any Christians publicly asking why God sent this plague?

In the Bible, plagues always come from God. Every single time. If you see a plague in the Bible, God sent it, and he sent it because he was angry. But the fundamentalist churches are all either denying the existence of the Covid plague or they're accepting entirely secular explanations for its origin.

Why aren't any of them assuming that God sent it, and then asking why he's so angry at the country that has suffered more deaths from it than any other country?
Click to expand...

Anyone who studied past public debates over creationism, sex education, seatbelts, helmets, and the risks of cigarette smoking should have anticipated this whole Covid right-wing anti-masking anti-vaxxing disaster. It's the same script. We've seen it again and again and again.

The playing field changes, but the players remain the same.
Click to expand...

Staff member
Council of Elders
Citizen
Meanwhile my neighbors have been having large parties for two weeks now. Nobody gives a shit.

Citizen
If only it were that simple. Or isolated.
S

Pale Rider said:
FB friend: Why aren't any of them assuming that God sent it, and then asking why he's so angry at the country that has suffered more deaths from it than any other country?
Click to expand... 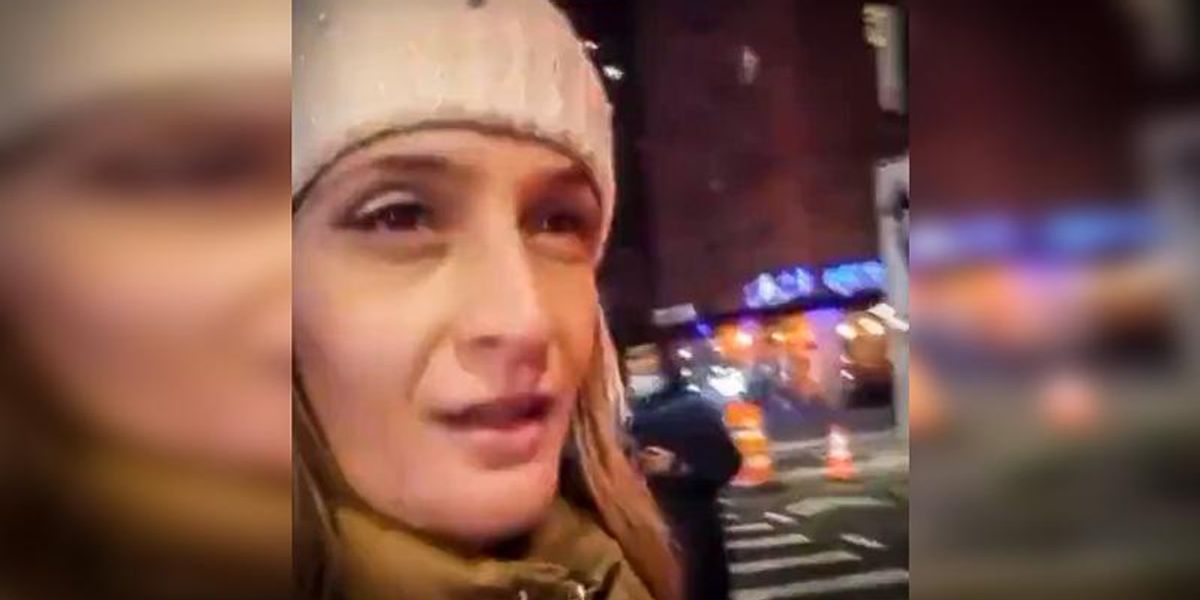 'I have it too': Maskless woman casually admits Covid-19 infection at anti-vax rally

A New York woman was caught on video casually admitting that she was fighting a Covid-19 infection while attending a rally against vaccines.Independent reporter Talia Jane shared a video of Stephanie Denaro appearing slightly out of breath as she attends the rally in New York."Danny’s in the...

Citizen
https://twitter.com/i/web/status/1476034079778910208
Honestly, this tracks. Whenever I see mobs of vaccine protesters on the news, it's mostly people who haven't gone gray yet.

Citizen
Our prison is in a bad spot. We have over 10 overtime spots on each shift, half our staff is out with new 'Rona. It's running rampant through the inmate population as well, but we haven't locked the facility down. We just keep moving the positives to a couple of locations and letting their roomies and everyone who was around them carry on.
Inmates are refusing testing because they don't want to be locked down till they're sick. The warden is refusing to test any of the vaccinated as, frankly, she doesn't want to hear the bad news. Every person we have tested, though, has come up positive. 100% of inmates tested test positive.
We are in serious trouble.

Citizen
So the provincial government is going to require vaccine passports at the pot shops and the liquor commissions. Apparently they're also talking making it a requirement for other retail as well.

Citizen
I wish the US had the brass for that, but it would spark riots all over because MUH FREEDOM

Citizen
Oh, it'll be a mess up here too. But it's something that needs to be done cause the hold outs will continue to refuse this simple request unless pushed into it. Fine, we don't have a vaccine mandate, but you literally cannot operate in society without the passport so... suck it and get jabbed princess.

Rhinox said:
Our prison is in a bad spot. We have over 10 overtime spots on each shift, half our staff is out with new 'Rona. It's running rampant through the inmate population as well, but we haven't locked the facility down. We just keep moving the positives to a couple of locations and letting their roomies and everyone who was around them carry on.
Inmates are refusing testing because they don't want to be locked down till they're sick. The warden is refusing to test any of the vaccinated as, frankly, she doesn't want to hear the bad news. Every person we have tested, though, has come up positive. 100% of inmates tested test positive.
We are in serious trouble.
Click to expand...