Daith said:
When do we get Marvel Boy/Justice though?....

So where have Justice and Firestar been during the whole Mutant Krakoa gathering? I just realized both are mutants that I don't think have ever shown up.
Click to expand...

One assumes Firestar has been teaching, just off panel?

I think I'm misremembering, but the conclusion of the New Warriors series 4-5 years ago had Speedball and Vance leaving to travel the country, righting wrongs they encounter. Perhaps they did this on foot. (BRIEF INTERWEB SEARCH LATER) Ah. That was volume 5, and it came out in 2014.

I can't believe that was 8 years ago. The volume 5 team was a good team. I'm bummed we only got 12 issues.

Citizen
Dr Strange: MOM figures revealed and up for preorder on Hasbro Pulse.

I am absolutely down for Sleepwalker and Despair. I really want Rintrah too. I loved him when he was hanging around as Docs student.


-ZacWilliam, really excited for Sleepwalker though. 90s Marvel is a nostalgia spot for me.

Citizen
Sleepwalker is cool to see get a figure, but this is thankfully an easy to skip wave for me. I guess a Target exclusive Ragnarok is also going live. And despite being an easy comic Thor torn robot face faker head retool they did give him something missing from many Thor figures. A Spinning Hammer accessory! 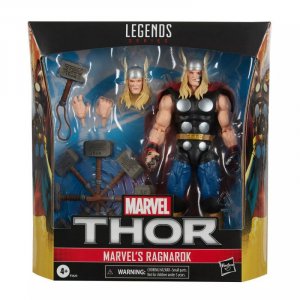 And a Target exclusive "Defender Strange" is also going up. I'm not posting a pic cuz the costume could be spoilerific but it does come with a magic portal effect to walk through. And fist hands.

A Jigsaw figure is coming

I'm not as into the Doctor Strange wave, but I can't imagine I'd simply not buy a Sleepwalker I saw in a bricks and mortar store.

Citizen
I could skip Wolverine and Sabretooth. Havok is tempting just for the classic look and power effects. Vulcan and Darwin aren't must haves but are tempting.

Oh but Siryn I need for X-Force completion, and Maggot is just my OZT era jam! Bonebreaker..... I want the tank part and need to see if I can find a robotic top body to make a BASEWARS tank robot

Citizen
I think MODOK might be my favorite Marvel Legends figure of 2021. The sculptors nailed it. He was incredibly easy to get (and if you waited until November like me, you got him for $30). He's a perfect rendition of a Marvel character I wasn't sure we'd ever see.

PLUS! He's got that Mr. Potato Head thing going on where he can store his own extra gear.

Citizen
Got these three in the past couple of weeks. This has been a good month for online deals. The Black Knight I got off ebay for $20. His right leg was busted. I tried placing a magnet in it to preserve the articulation, but failed. Some gorilla glue later, and his right leg is fixed enough to pose. 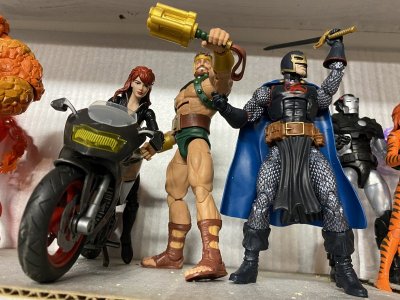 And Hercules is just happy to be with his buddies.

Citizen
So with Kingpin and Monster Venom getting rereleased recently are there any former BaF’s that you want to see again in a deluxe box set or such?

I’d really like another chance to get Onslaught sans a Red Skull head and maybe packed with second figure that may be a pipe dream. I think it would need a completely new tooling for it. But let’s get a Kid Franklin Richards.

And hey let’s reuse the new kid buck we’d make there to go with our Lizard BaF rerelease. Billy could could come in either lizard boy our soon to be devoured regular kid flavors.

Getting away from small children pack ins, how about another pass with Rhino. Both him and the Lizard should be bi annual releases to me with various deco changes occasionally. 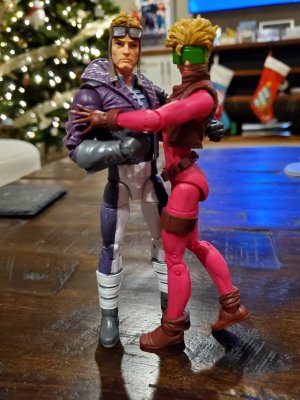 Citizen
So weird where Sam is in the comics anymore. What is Tabitha even up to anymore? I haven't checked out New Mutants in a while. I presume that's the title that would have her around in it.

Citizen
She was in Nextwave for a bit.

Citizen
Ya but Nextwave was years ago. She’s come back to X-Force since then. But since Krakoa I really haven’t seen much of her.

Citizen
Preorders for the Bonebteaker BaF X-men wave is going live on BBTS at 1pm E/ 10am P today. Can’t wait to preorder my blue man with his girls!

Citizen
I like that I don't have to order Wolverine to build Bonebreaker.

Citizen
It works out well for team waves; they can stick a Wolverine variant into any wave they want without interfering with the BAF.

Doesn't work out so well for Spider-Man waves. You'll get a Spidey without a BAF piece each time, but you'll also get two more that do have them.

Citizen
Wolverines got enough clout to sell on his own most of the time Even with the modern yellow suit look with the heated claws there's good chance he's going to sell. Others like Maggot, Vulcan, and Darwin, less so. Maggot hasn't been relevant since the Post Onslaught to OZT era. Darwin has got a tiny bit of clout being used in the First Class movie, although the depictions are completely different looking, and there are people who loosely follow comics that probably don't know who the heck Vulcan is let alone being the third (or fourth) Summers Brother. Siryn has people already chomping at the bit to complete X-Force, and While classic appearance Sabretooth isn't everyone's preferred version, he's still a popular enough character.

Citizen
Got another Marvel Fan First Friday announced Monday the 21st. I expect Toad will finally be announced to round out the first 20th anniversary wave.

But had some fun with my figures tonight. 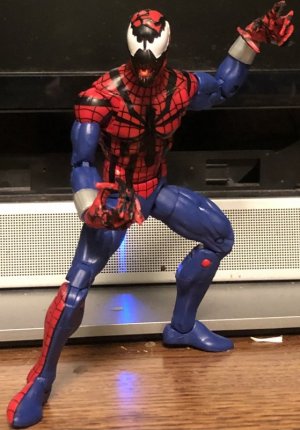 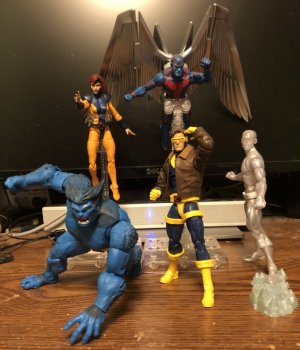 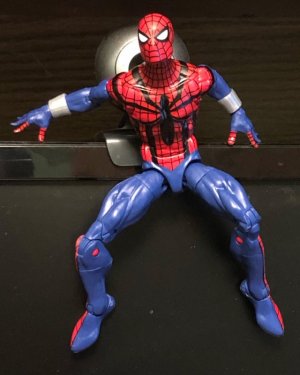 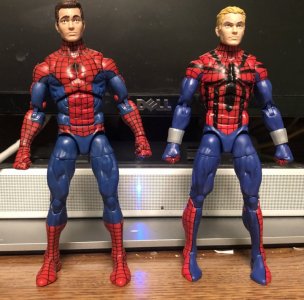