Citizen
...so now we're getting Thor's post-Endgame 'feelings' movie? A lot different from what I think anyone expected. What's up with them increasing Portman's eye size by 20%? Anyone else notice this right away?

Citizen
Post-Endgame Thor and the Guardians of the Galaxy and the Greek Gods and Lady Thor all sounds pretty chaotic.

Citizen
Who's the blue-haired lady with Thor on that ship?

PiratedTVPro said:
...so now we're getting Thor's post-Endgame 'feelings' movie? A lot different from what I think anyone expected. What's up with them increasing Portman's eye size by 20%? Anyone else notice this right away?
Click to expand...

Even knowing it's her, I'm still not sure it's her. I think it looks more like Kat Dennings.
S 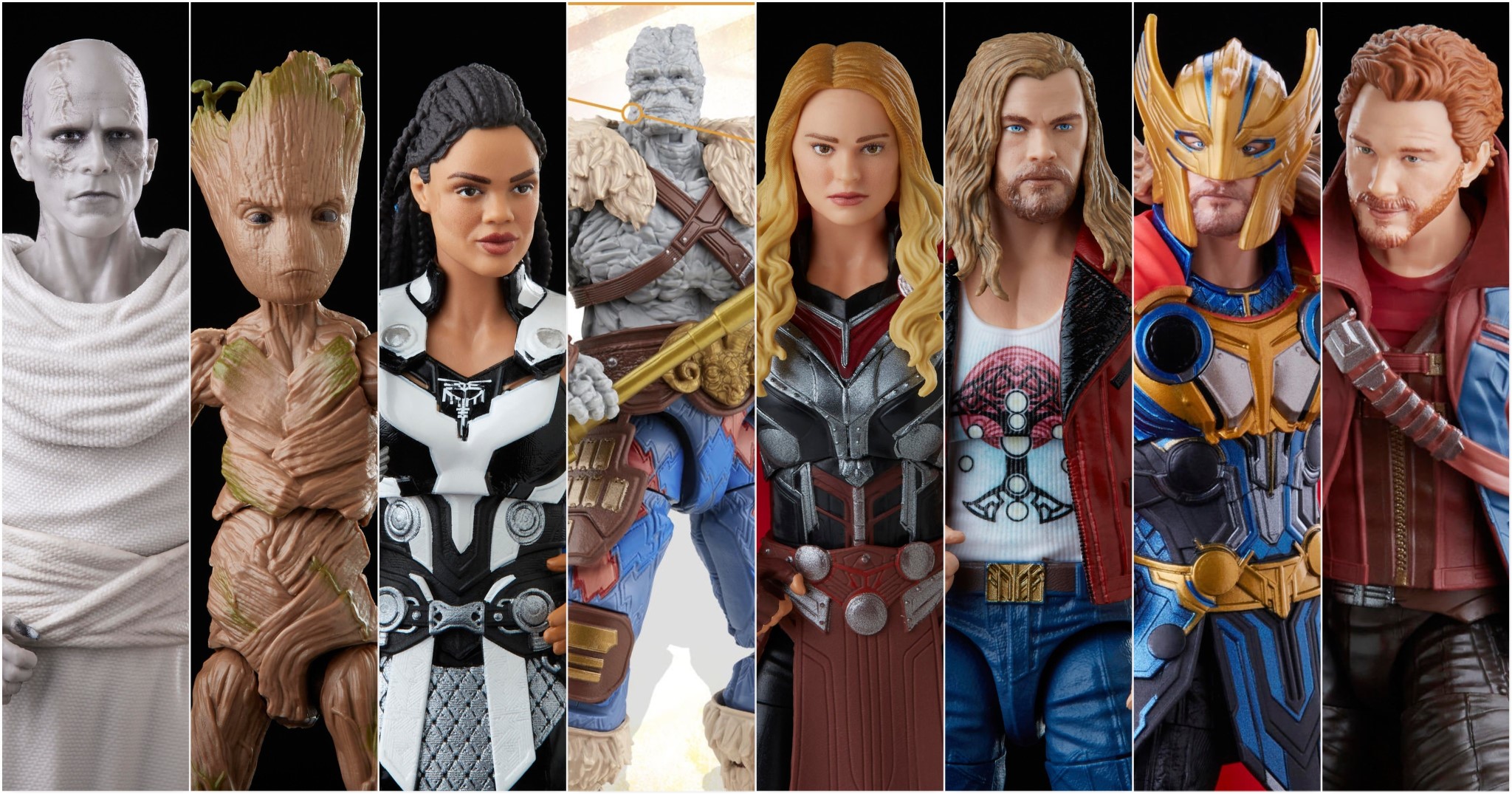 The trailer for Thor: Love and Thunder dropped earlier today, and with it the official product reveals have been unleashed. We get our first look at Wave 1 of Marvel Legends courtesy of Comicbook.com and the Mighty Thor Mjolnir Premium Role Play Hammer from IGN. Love and Thunder Wave 1 will...

Cradok said:
Even knowing it's her, I'm still not sure it's her. I think it looks more like Kat Dennings.
Click to expand...

This was honestly my first thought in the seconds after seeing that shot.

I'm guessing the structure for this will have us start with Thor processing his Endgame stuff and enjoying life with the Guardians, looking to retire from superheroing -- then something will happen between Zeus or whatever and New Asgard (or there'll be a chance to find a new new home for New Asgard) that will need Thor to work with/for his people again. Or Gorr takes down Zeus or something and other gods/godlikes/whatever are needed to take him down. At which point the Guardians go off to their own movie and Thor gets to work on the next two acts of this one.

Nnnoooot sure where Jane and repaired Mjolnir could come in here.
Last edited: Apr 19, 2022

lastmaximal said:
I'm guessing the structure for this will have us start with Thor processing his Endgame stuff and enjoying life with the Guardians, looking to retire from superheroing -- then something will happen between Zeus or whatever and New Asgard (or there'll be a chance to find a new new home for New Asgard) that will need Thor to work with/for his people again. Or Gorr takes down Zeus or something and other gods/godlikes/whatever are needed to take him down. At which point the Guardians go off to their own movie and Thor gets to work on the next two acts of this one.

Nnnoooot sure where Jane and repaired Mjolnir could come in here.
Click to expand...

Plot twist: Jane and Mjolnir are the reason Thor has to aid his people once again.

Citizen
Saw it. Two extra scenes at the end. One is essential to the story. The other is sequel hook at the end of the credits.

Well, I did tear up at one point but not for the reason they were going for. It's a wish fulfillment thing for me.

Super annoyed at the costume thing. Like, dang! The ones I wanted to see were the ones he used least, boo!

Are there Thor comic fans here? I want to know if my favorite part is in the comics somehow.

Maverick
Dr. Strange Multiverse of Madness
...
Thor
...
Everything Everywhere All At Once
...
Lightyear
Last edited: Jul 6, 2022

Citizen
I teared up every ten minutes during the last 30 minutes of the film. Definitely had to do with family stuff we've been going through lately, but I think it will hit a lot of general audiences the same way. Spends a shaky first half taking some time to find its footing in the second half of the film which has 'ripped straight of the comics' visuals and amazingly directed fight sequences. See this with laser projection if you can because there are definitely some very dark scenes in this film that might be more difficult to see with a dim bulb. Dolby Atmos made a huge difference, see it that way if you can, and it might have one of the more memorable scores for me recently. That said, I don't know how to feel about four needle drops from the same album.

Citizen
That was wildly enjoyable.


ZOUNDS! I can’t wait. Pitch perfect casting too. I do wonder how his personality will end up since comic Hercules is basically Movie Thor already.

Citizen
I'm wary cuz he has the more of an
Ares vibe, at least in his role as a grump in Ted Lasso. As Hercules, he needs to be more movie Thor in personality, yeah. But I haven't seen Brett do his standup routine so maaaybe? But he needs to be HUGE to be Herc.

Oh the part that made me tear up was when the kids were getting powers. Thor sounded like Odin bestowing magic. It felt like Shazam Billy sharing his power. I was a bit disappointed that Thor said For a limited time only, dang. But if the kids keep their weird weapons, maybe some residual energy will build up over time through great feats and they can have Mjolnir like weapons and be a future Legion of Super-Heroes type team. So... is that in the comics somehow?

Citizen
Appearance by Darryl and Stormbreaker 's jealousy were my favorite parts.

Citizen
I didn't hate it, but it left me cold. I'm not a fan of Taika's goof-ass Thor world in general, but Ragnarok made me laugh enough to keep me from being completely turned off by the story, and this simply did not.

When I'm not enjoying a movie very much, I tend to start picking apart the plot, and boy-golly, can this one not bear that.

Citizen
This did seem to have a checklist of stuff they wanted to cover and the “story” didn’t really paper over that so you didn’t notice.
M

Citizen
I... Dunno how I feel about this. I feel like Ragnarok was the sweet spot of goofy rock n roll space viking. I didn't really like that Valk got sidelined out of the final fight. I didn't really like how we only get Jane as Thor for this movie as they fast tracked he rise and fall without letting her really enjoy it for very long. Love conquering all? I mean its a classic ending but feels super out of place in a movie about a guy who wanted to kill all the gods and never once thinks he could just bring his daughter back. I guess if he didn't then we would just have another "Why didn't Thanos double all the resources" thing again but ugh. Also I think this strangely shows that Bale could have made a good joker. I can't really care about Zeus. He died, then he didnt die. Now a minor greek player is set off to kill Thor when... Herc is the god of strength and heroes he should be the last person to be doing wetwork for Zeus? Like if anything him and Thor should bro out?

Also rewinding back to the beginning of the movie, yeah its funny that he annoyed the Guardians enough they all were rushing off when he said he had to go but also like... We never got to enjoy any real antics with Thor and the Guardians. Such a wasted opportunity. They just team up at the end of end game, then next we see them they are sick of him and bail. They might as well never have teamed up other than to get a comic book reference in

Looking back on what I wrote I guess I do know how i feel about this. This felt kinda like they just wasted a lot of potential and pumped out a kinda cliche story that didn't really bring much unique and cool to the table.

Citizen
The best part was
Thor's split.
A

Citizen
I really feel like they got a lot of praise for Ragnarok so they were like, "We could REALLY do this" but I wanted them to just do what they did in Ragnarok.

Well something. Bale's performance was impressive. He's never done ANYTHING like this, as far as I know.

It is an intriguing idea, perhaps plenty developed in comics, that powerful beings just tend to adopt a planet and "Protect it", more or less. Interesting that it would be this widespread phenomenon and they'd all network. Adds a wrinkle to something that has confused me. Are regular Asgardians totally mortal? I had assumed that they were all freakishly strong and long-lived with advanced technology that seems magical. Until Ragnarok that seemed to be all Thor was, but he's gotten a lot stronger and the whole lightning thing and I didn't rethink it all, but it doesn't seem like the people in New Asgard are anything special. So has Odin's family just been resident Gods on a planet of mortals?
You must log in or register to reply here.
Share:
Facebook Twitter Reddit Pinterest Tumblr WhatsApp Email Share Link
Top Bottom