Staff member
Council of Elders
Citizen
So what is everyone playing these days?


I do get some time with Minecraft every now and then on the switch.

Citizen
Pokemon Go, another play through of Miles Morales to get myself through another platinum on the PS5, and playing some of the Castlevainia Advance Collection.

I've never played anything from this series before and it's all kinda overwhelming (every button brings up a whole new menu, guh), so I've been taking it slow in the free-play Expedition missions.

Citizen
Finally sitting down to give Dark Souls the actual time of day. I'm surprisingly having fun with it this time around. Just reached Anor Londo.

The first two are the most fun, The Arcana is really engrossing but I'm mostly done reading it. The other two I play for quick sessions (eg waiting for an appointment).

Citizen
started up the outer worlds again a couple weeks ago since i finally got around to getting the 2 dlcs. got as far as landing on groundbreaker before i stopped and havent resumed yet. gotta make the time to get back into it, otherwise what i paid for the dlcs is wasted!

Citizen
My abusive relationship with Enter the Gungeon remains as strong as ever, but I've added a new infuriating roguelike to the mix, Void Bastards. It's a first-person shooter with heavy System Shock inspiration and a tone right out of The Hitchhiker's Guide to the Galaxy. Technically it's a roguelite in the vein of Hades or Rogue Legacy because you occasionally make permanent progress towards the eventual goal, but that's just being used as an excuse to make the game even more dickish in other ways. The game doesn't have bosses (or levels) in the traditional sense, but unless you have the item that makes pirate ships disappear, they'll camp the ship that contains your major progression item and you have to deal with a ship full of minibosses. I managed to survive once and I don't remember how.

Also I started Hollow Knight. The bosses have been pushovers so far, but the platforming... got super hard around the point the bouncy mushrooms showed up. Every single person I've watched play this game has made it look way easier than it is. And the frame-perfect timing I have to do with my wall-grip and dash to hit the switch to open the pit to the Mantis Lords is insane. I might have to try playing with the keyboard and see if I'm any better with that.

Oh, and I finally snagged a component cable for my PS2, so I'm probably going to biting into that massive backlog pretty soon, provided I can figure out where my memory card got to. It isn't in with any of the other PS2 accessories so I'm probably going to have to turn my whole room upside down. This is the second memory card that's gone missing now; I'm starting to suspect they just have a despawn timer.

UPDATE: OK, it turned out it was in the amorphous pile of papers that I'd also buried my shovelware DS games in. Realizing they weren't on top of said pile with the good ones was the clue.

Citizen
Unsighted, because I need my fix of depressing indie tech girl shit and it's been too long since Iconoclasts.

Citizen
Lots and lots of valheim.

And I've been meaning to start a new character on "new world" since I downloaded it.... but... valheim. Need to finish the lodge and find more swamps.

Citizen
No Man's Sky, Wario Ware Get it Together and a smattering of 8/16 bit era games.

The Predaking said:
What is power wash simulator?
Click to expand...

It's a simulation of using a power washer.

I wish I was being sarcastic, I really do. But I'm not. You play as a guy who owns a power wash company and you CLEAN SHIT, run and upgrade the company and that's the game.

wonko the sane? said:
It's a simulation of using a power washer.

I wish I was being sarcastic, I really do. But I'm not. You play as a guy who owns a power wash company and you CLEAN SHIT, run and upgrade the company and that's the game.
Click to expand...

It's like, 90% pretty straightforward Just Really Cathartic Powerwashing, the last 10% is weird quirky humor and stuff going on in the town that you get via text updates from your clients/friends/family as you progress through the jobs. It's nothing like other games with Simulator in the title that are all acid trippy and half-baked physics abortions masquerading as a game.

Citizen
I mean, you could, yes, but I do enjoy more precise control over my sprayer.

Daith said:
Pokemon Go, another play through of Miles Morales to get myself through another platinum on the PS5, and playing some of the Castlevainia Advance Collection.
Click to expand...

Well Miles is again nearly 100% Trophy wise, Again just missing the 100 hit combo. Once you max out the skills it becomes even a bit too tough to obtain as you take out enemies too fast. Ended up finishing playthroughs of Super Metroid and Metroid Fusion before Dread comes this weekend. Debating on grabbing either Nick All Star Brawl or Monkey Ball Banana Mania tomorrow just for fun. 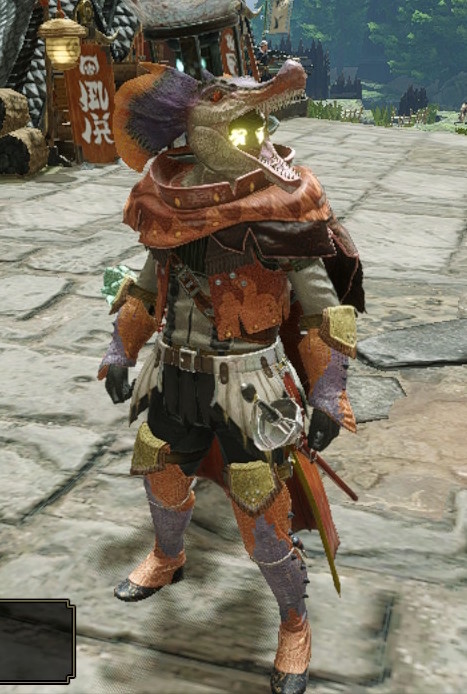 Cowboy Lizard Man! The costumes in Monster Hunter are kinda amazing. My cat's got this horror nurse outfit made out the skin of a nightmarish Dead Hand Dragon thing.