Citizen
So anyways. I don't really get why Vader just... gave up? Like oh no there is a fire between me and him, that thing I just extinquished seconds ago. Oh no a loader droid that I could easily rip apart is carrying him away. I could honestly just walk through this flame in my protective suit and cut it in half but nah I'm going to turn around and consider the thing a wash.

Like.. what? Seconds ago hes talking about how much hes going to torture him and then boom gives up. No reason. Also how did 3rd sister get from the entrance to the tunnel way after the left but beat leia to the end point. Is she related to Jason Vorheese?

Like the latter 3rd of this episode was just a bunch of... really questionable plot choices that felt lazy

Citizen
The premise of the entire show is questionable.

Monique said:
Like the latter 3rd of this episode was just a bunch of... really questionable plot choices that felt lazy
Click to expand...

Citizen
I will say this much: they got Vader's voice pitch perfect this time. I don't know if they fine-tuned it with the same AI that they used on Mark Hamill's voice in TBOBF, but he hasn't sounded this good since the original trilogy. Maybe even since TESB. It had just the right amount of gravel, which I always thought was somewhat lacking in ANH and ROTJ.

Citizen
"Where'd they go?"
"There the are! they're listing lazily to the left! GO LEFT! LEFT!
"Boy that guy knows some manoeuvres."

Citizen
When Vader finally caught up with Obi-Wan, he really...raked him over the coals.
---Dave

Monique said:
So anyways. I don't really get why Vader just... gave up? Like oh no there is a fire between me and him, that thing I just extinquished seconds ago. Oh no a loader droid that I could easily rip apart is carrying him away. I could honestly just walk through this flame in my protective suit and cut it in half but nah I'm going to turn around and consider the thing a wash.
Click to expand...

The only thing I can figure is that after 10 years of searching and yearning for revenge, Vader found that actually catching this shell of the old Obi-Wan to be a bitter disappointment and was momentarily lost in his own depression/self loathing.

Citizen
Of all the problems I have with this show, Vader letting Obi-Wan slip away isn't one of them. Perhaps that's what he meant in ANH when he said "you should not have come back."

Maybe Vader was willing to let Obi-Wan linger on as a broken husk of a man until his old master showed up again on the Death Star with the clear intention of causing trouble for the Empire.
Last edited: Jun 3, 2022

Citizen
It is VERY hard to convey emotions in that costume, but I got the impression of, "Hm...yes, that was sufficient."

Citizen
I agree with the idea that it was Vader mostly messing with him. We know Vader can still be a badass thanks to the hallway scene in Rogue One. He didn't need to do anything more with Obi-wan.

I also agree it's a bit odd that Vader let Obi-wan get away. The fire wasn't really an impediment - aside from the fact Vader had extinguished it once, it didn't even stretch all the way across the space; the stormtroopers could've gone around it. But I suspect we'll get something about how he intends to use Obi-wan to track down the fledgling Rebellion or something. Or he just trusts that there's no where he can go - presumably Reva informed him she was on the way to the port to secure their means of escape.

I continue to be impressed with the actor playing Leia. I hope the people around her protect her from the Fandom.
E

Citizen
I was also surprised when Vader let Obi-Wan go, but I'm willing to wait and see where it goes. Even if we didn't know he was able to use the Force to extinguish the fire, or that he's wearing a suit shown to be fire resistant in other media, that particular fire just didn't seem to be a real impediment to just going around and catching up with this very slow-moving droid taking Obi-Wan away. So I have to assume it was a choice to either let him go (like with the Millennium Falcon in the movies) or to just not bother wasting any more time on this apparently beaten and broken old man.

Regarding earlier comments about Obi-Wan's demeanor, I don't think it'll stick around as a real complaint the way it did with Luke in the ST. It's just a much more natural fit for Obi-Wan at this point in the saga than it was for Luke. When we last saw Luke before TFA, he was celebrating the effective collapse of the Empire, having fulfilled his role as the New Hope for the galaxy. There had to have been some massive off-screen developments to basically turn him into a completely different version of the character we'd last seen on screen. It's understandable that didn't sit right with a lot of people. Especially since he effectively killed himself off in his return to form, leaving nowhere to go from there.

But for Obi-Wan, there were no victory celebrations the last time we saw him. He had just seemingly killed his own apprentice and best friend, seen his entire order and the Republic it served utterly destroyed, and was going into exile, where we know he'll be shunned as some weird old hermit when we see him in ANH. The movie ended on a hopeful note by ending on Luke and Leia, but there's no doubt it was a dark movie, and would have been traumatizing to those who survived it. Obi-Wan's always had an aloof-enough Jedi demeanor that I think we could imagine him going straight from RotS to ANH without any major events in between, but having him go through PTSD, losing his way, and having to find his way back also feels like a very natural fit. So as long as he does make it back to being the Obi-Wan we know from the OT by the end, I doubt we'll hear much more about comparisons with TLJ Luke going forward.

A friend said that Inquisitors were lower level Siths. Is that true?

Dvandom said:
It is VERY hard to convey emotions in that costume
Click to expand...

Somebody rewatch ESB and tell me if I'm going crazy.

Dvandom said:
It is VERY hard to convey emotions in that costume
Click to expand... 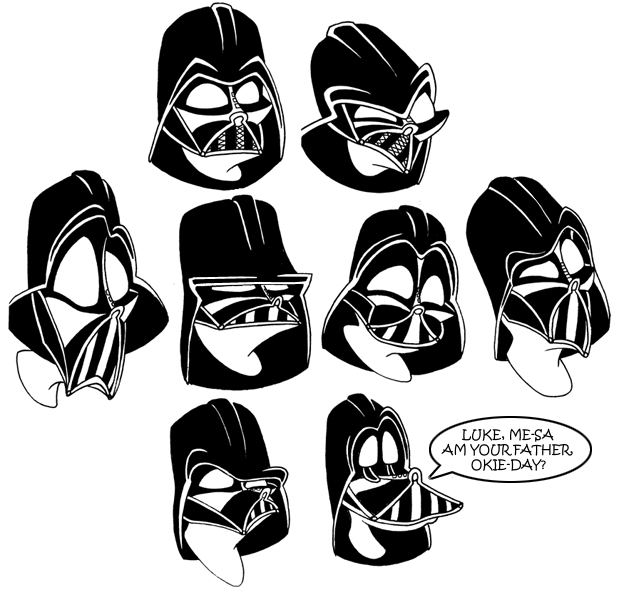 Citizen
When I was watching it, I totally forgot that he had just stopped fire with the Force and had the impression that he might be afraid of fire.

It is the next morning now and I've read the above. And I wonder if that masked face was saying, "This doesn't feel as good as I thought it would."

Citizen
I could totally buy Vader leaving Obi-Wan as being too pathetic to bother with... He kind of is at this point. He probably wanted an epic duel to prove his superiority, but instead his old master spent half the fight running away and then kinda flailing pathetically.

I can totally see this being the foundation of their final duel in A New Hope.

Citizen
Like the fact Vader *doesn't* pursue Obi Wan tells us how he feels about this battle. I've seen people have a problem with him not just destroying Ben or capturing him, but the man goes out of his was to kill innocents to draw him out and what he draws out is a husk of his best friend. Clearly Vader wanted to live out his torture fantasies, so just annihilating Obi Wan didn't sit right with him. I'm sure Vader has complete confidence he'll get what he wants, eventually. He's already waited this long. It doesn't bother me.

Also, knowing Obi Wan *did* have back up might make him hesitate and question how much back up and he doesn't feel like exposing himself to that mess. Again, I'm okay with it.

A friend said that Inquisitors were lower level Siths. Is that true?
Click to expand...

Reva is new to the show I believe. But considering the comics and etc I could be wrong.

Inquisitors are not Sith by definition as they are Corrupted Jedi, or Dark Leaning Force Users. Sith commonly gets tossed around as the generalized term for this a lot, but Sith is a title reserved for very few in universe. And with the two title holders here creating this inquisition and Sidious seeming to stretch his options over the course of the prequel era it's kind of easy to see why it's tossed around so easily.

Citizen
Basically, after a massive kill-off of Sith due to infighting, the survivors decided that the best stuff should be reserved for only two, who would be the Real Sith. Everyone else would be minions, given just enough training to be useful, but not enough to challenge the leadership. Some of the better ones might decide they can challenge for the position of apprentice, but the plan is that none will ever figure out enough lore on their own to challenge the master. They turned Sith from a faction name into a title reserved for the leaders of the faction (and mostly changed tactics from "massed armies of Force-users" to "manipulate the normies behind the scenes."

(In the old EU, Sith was initially a race that was naturally gifted in the Force and formed the elite of the darksider faction before giving it their name, but I dunno how much of that got ported over into the new continuity.)

A friend said that Inquisitors were lower level Siths. Is that true?
Click to expand...