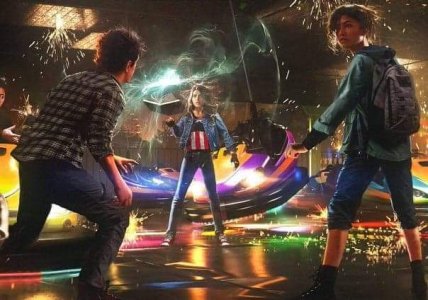 And it really wasn't that scary, either. Creepy, sure, but not scary. Maybe to little kids, but not grownups or even most teenagers. And all of it was just in the special effects. CGI horror, and nothing nearly so frightening as, say, Stranger Things.

Citizen
Saw it tonight. Not gonna tell you how disappointed I was at the fate of certain characters but my god the amount of Evil Dead references in there was amazing.

Ironbite-especially at the climax.
A

Citizen
Movie marketing just isn't working for me these days. I try to ignore it, but I don't ignore it and it screws stuff up.

Try as they might to quell rumors, it turned out that I never did hear a rumor about Spiderman 3 that wasn't the truth. I presumed that the same was true of Strange 2 and it came to almost opposite. Pretty much every rumor about it was false, including rumors started by its own producers. It wasn't the biggest MCU movie since Engame. It was only the biggest since Spiderman 3. There was no substance to "If you liked Spiderman 3, wait til you see Strange 2". I did wait. So what? I still haven't put pencil to paper or watched someone else do so about how many Marvel characters there were in the movie. I knew when we were told that it would break the record that the number would include multiples of the same character, but still I feel doubtful about it and believe that if it is the truth there is some cheating going on, such as a bunch of inconsequential Kamar-Taj residents who don't matter in the movie but do in fact have names from the comic books.

Having written the above is irritating to me, because I honestly liked the movie. It was a worthy successor to what came before. It is a little troubled as a followup to WandaVision, but you can work it out. It was a fun superhero movie and it advances the overall story in interesting ways. So why must marketing pretend? Are they really afraid people aren't going to come out for a Marvel movie?

And really if I were a producer on this movie, as many people as there were pining for the Tom Cruise Iron Man with 3 Infinity Stones (or thereabouts), I really feel like it wouldn't have been beneath me to find a microphone and just say, "No, that's not what this movie is about". I don't want to get into a hot and cold game with speculating fans, but when a specific lie gets that pervasive it seems like the truth ought to be told.
You must log in or register to reply here.
Share:
Facebook Twitter Reddit Pinterest Tumblr WhatsApp Email Share Link
Top Bottom