Citizen
Spinning off into its own thread. Spoilers ahead for Doctor Strange, Thor: Ragnarok, Avengers: Infinity War, Avengers: Endgame, WandaVision, Shang-Chi and the Legend of the Ten Rings, and Spider-Man: No Way Home.


Is that Dr. Strange Supreme from What If?
Click to expand...

Citizen
Huh, this was played after Spider-Man No Way Home and, as far as I can recall, there were no additional scenes. Soooo it doesn't count as a bonus scene for No Way Home? NWH only has one official bonus?

Citizen
It's basically like how Captain America 1 had a post-credits trailer for Avengers 1 at the end of it.

Citizen
So who is Bruce Campbell playing?

Paladin said:
So who is Bruce Campbell playing?

Citizen
Is it wrong to hope Hasselhoff has a cameo as his Nick Fury.
S

Citizen
TBH, it would probably be the biggest "thing" he's done in years. I don't expect it...but Marvel can always surprise us.

Citizen
He did previously cameo in GotG Vol 2.

Was there any background on why the Aladdin carpet-y cloak attached himself to Stephen? After he got free, Stephen just totally accepted him.

Does he have a name?

Citizen
I saw it. Two extra scenes at the end. Mid is important. Last is not.

No spoilers but, screw me, it's frighteningly scary how it doesn't feel like a typical Marvel movie.

I want to talk to someone about it already, dang!!!

I'm so glad I didn't see the other trailers beforehand, other than the one they showed at the end of No Way Home.

I'd like to see a reaction from someone who didn't watch WandaVision.

Just a cool semi Transformers thing but after I saw someone, I thought I recognized him as an character that was created by Bob Budianski. I only knew him because he was in the first Marvel comic series I ever collected. I'm flabbergasted if it's ever confirmed that it's him, because, wow, that would be awesome.

Fero McPigletron said:
Just a cool semi Transformers thing but after I saw someone, I thought I recognized him as an character that was created by Bob Budianski. I only knew him because he was in the first Marvel comic series I ever collected. I'm flabbergasted if it's ever confirmed that it's him, because, wow, that would be awesome.
Click to expand...

Maybe if you'd put it in a Spoiler Box instead of talking in riddles?


Really enjoyed the movie had some great moments. Some damn impressive visuals (for the most part) and great musical cues (!!!) Tho I'm honestly a little apprehensive of recommending this to my Mom for this weekend due to the shocking prevalence of gore and horror elements.


Wanda being the real villain was theorized early, but those teaser trailers were very sneaky sneaky and threw us off her trail. I can't say that I wasn't still a little sympathetoc to her til the end of the movie. Clearly she was in the wrong, but dammit there has to be a reality where her kids are real (wtf mate?) but she has recently deceased for some reason, able to slot in perfectly Rick and Morty style. I guess America could also pluck Wiccan and Speed (shoulda been "Quicken") from some other reality when theyre needed for the eventual Young Avengers stuff.

When did the cloak get fixed with that blue star pattern?

Citizen
On the Bob Budianski character :


It's the villain of the Sleepwalker comic, the series Bob created in the 90s. Sleepwalker was slightly controversial because a poster advertised it as 'Sandman done right', since Neil Gaiman was just releasing Sandman around that time.

His name is Cobweb and as far as I know, he's only ever appeared in the Sleepwalker comics. Sleepwalker and Cobweb are also based on the Mindscape, a mental plane, which isn't technically mystical in nature. Cobweb probably has no connection to the Strange comic but it's awesome if it really is him used in the movie, even as a nameless enemy. Dr Strange and Sleepwalker did meet when Strange summoned him in two issues of the Defenders comics.

When I saw the enemy attack Strange and America, I couldn't figure him out. But the thread-like nature then when his bandage-y face appeared and when he restrained America, it really made me think it was Cobweb. Pretty awesome that he gets notoriety for killing a Strange variant. If that was him. Which I hope it is. 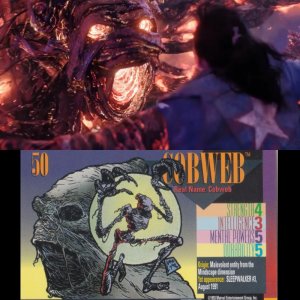 Bob Budianski has a ton of Transformers characters that he named that got on the big screen but Sleepwalker (and Cobweb) are all his tho).
Yeah, the movie was scary. Could be argued that it's a low PG rating so not bloody or gory but the imagery is still frightening (kinda awesome yet frightening for some parts). Actually, the heavy suspense / thrilling moments were probably scarier. Very cool but, I can see kids getting nightmares from this, if parents brought them in expecting a superhero action flick and not a suspense horrorest.

Still, awesome movie. A lot to get into in terms of theme but a small but concrete negative for me would be the acting (and all related), from the ice cream. Uuuuugh.

Citizen
Saw it tonight, had a lot of fun with it. Full of Raimi goodness. It had three roads to walk (pay off a storyline from a different project, play hype machine for future projects, and function as an actual, proper sequel for the title character), and I thought the movie did all three rather well.

So far, the negative responses I’ve seen have come in two flavors: (1) the standard complaints about superhero movies in general. I don’t agree with them, but I certainly can’t call them unfair. And (2) people feeling cheated because they were expecting the moon and the stars in terms of cameos. I feel no sympathy for this second group.

Citizen
Okay, I know everyone was freaking out about a couple of countries banning the film because of a lesbian kiss, and I'm as pro-LGBTQ as they come, but it really wasn't necessary to the plot of the film and looked like it was shot specifically to be easily cut. I reads as though they just made a big deal out of the banning because of Disney's recent political issues with the LGBTQ community in Florida.

Citizen
Was there even a kiss? If so it didn't even register with me.

Citizen
Yes, but like PTVP said it's a kind of blink and you'll miss it moment. Nothing really to worry about in most sane places but enough to make the Religious nuts go bonkers..... Which given the subject matter of Doctor Strange would already be setting off religious nuts anyways so I'm kind of at a loss as to why it mattered to begin with.

But damn that was dark for Marvel. I never thought it went overboard but some of the stuff was a bit beyond most deaths in previous films. But for Rami I guess it was a tad tame.
But man I'm glad not all the cameos had been teased in the trailers and TV spots.


As far as the Illuminati I found it cool to see Black Bolt come back. Would never had thought that would have been returned to with the movies. And this Captain Marvel, that was Monica's mom wasn't it? that was a cool surprise. But the music cue killed me when that chair floated in! And man ahhhh I don't want to say more as not to spoil some others too curious not to click on it but damn!
That said I found it to be an ok sequel to Doctor Strange and another obvious Marvel project. But sans the big multiversal reveals I'm not sure I'd be as hyped.


Anyone else feel like we are setting up Secret Wars with the Incursion talk? Is this how we could fold in the FF and Mutants in the MCU after a post incursion merging of universes? And I love how .... no must resist talking more...

Citizen
Yeah the cameos were great and very surprising.

That was
Maria Rambeau. I imagine it's as simple as her going on the test flight rather than Carol Danvers and being involved in the same events.

Citizen
Also that was full on a horror movie.

Glad to see
scary Wanda again. That is one of my favorite things about Age of Ultron. Also this had almost nothing to do with what happened in No Way Home. Mostly a sequel to Dr. Strange 1 and WandaVision (more of the latter honestly).