I remember reading an article where they thought the Cobra guy in a photo of the Outsiders was some superhero. I'm like, "Nah that's some Cobra guy from season 1."

Citizen
Wait, is the Superman thing deadly? I don't want to start the next ep with news of a tragedy, yikes!

So the laser vision is confirmed. If the Legion is around to stop the wedding, which villains have 'heat vision?' Dev Em? Chameleon Chief with shifted eyes? Someone suggested Phantom Zone criminals.

Edit - not really a spoiler since it's abstract but... I don't get the reference? What is it? The Anti Life Equation? 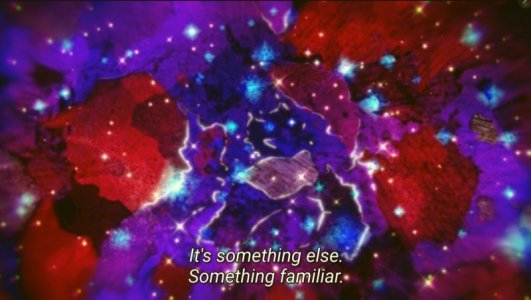 Citizen
Regarding episode 4, how could they end it like that. Those end credits too.

Citizen
Considering the characters in the periphery it's kind of obvious whats going to happen. But ya it's kinda brutal for the moment.

Citizen
So... Is that guy a good guy? He obviously altered the pants. But the Legion don't know about him. Is that their time bubble? I'm guess he's not heat vision guy?

(Because heat vision sabotage is to kill J'onn J'onzz. Heat vision in the cavern is to kill those investigating J'onn J'onzz's assassin attempt. Soooo... It's not a plot against Superboy and Miss Martian?)

If the Legion is doing a Lar Gand, how? Reep and Imra don't possess the right powers. If Tinya is Threeboot version, she can access the Phantom Zone?

The other thing was rather tragic. I guess it isn't all adventure, isn't all excitement anymore. Sad.

Also, the titles are spelling something out.

What the hex does Invit- mean? 'Invitation to Doom and Terrors'? It's 26 letters for 26 eps. 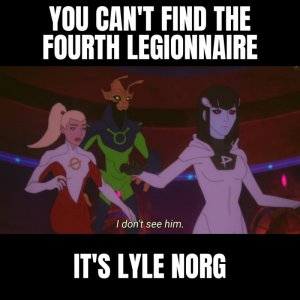 Citizen
Funny but the 5th ep does start with a T for Tale of Two Sisters. So the episode titles spelling could still be INVIT- e or INVIT-ation.

Is Onyx a comic character. Scandal?
A

Citizen
It's Invitation, we have titles through episode 8. And yes they're comic characters.

Citizen
Oh! I didn't know that. Last I checked the titles, they were all TBA. (Invittttttttt? Haha!)

Sooo I guess every four eps, will be shuffling to a different YJ member, until we get back to Superboy, in 1000 years? 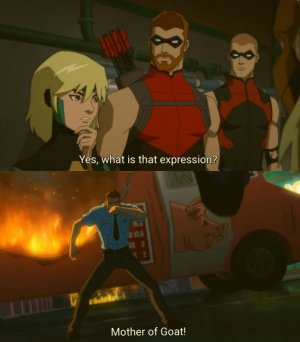 Citizen
It doesn't look like Artemis will ever go back to that superhero name. It's like it's been years that she's been Tigress.

Speaking of names, is that Arrowette shown Cissie Bonnie King? Or Maya with HIV? I'd love it if it was Cissie, since she's the one I followed in the Peter David YJ. I didn't read Kevin Smith's Green Arrow comic. 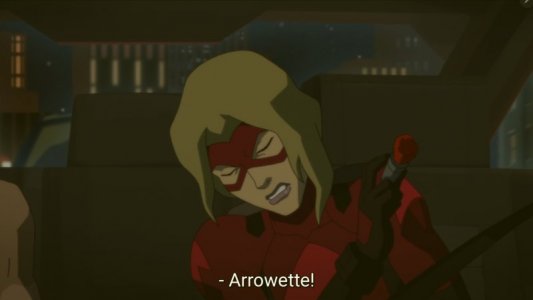 Fero McPigletron said:
It doesn't look like Artemis will ever go back to that superhero name. It's like it's been years that she's been Tigress.

Speaking of names, is that Arrowette shown Cissie Bonnie King? Or Maya with HIV? I'd love it if it was Cissie, since she's the one I followed in the Peter David YJ. I didn't read Kevin Smith's Green Arrow comic.

There is no Maya. Her name was Mia and she was never Arrowette.

Citizen
Mia! Not Maya! Well, I did say I didn't read the Kevin Smith Green Arrow.

Whoops! I guess Bonnie is Cissie's mom? It's been such a long time since I read Young Justice, haha. The father was Bowstring Jones, I remember but I know there's a King in there so the mom must be Bonnie King.

Since the Young Justice show changes some things around, and Will Clone Harper is still Red Arrow, then if that blonde is Mia, they might have changed her name to Arrowette. BUT I would vastly prefer if she was Cissie, the actual YJ alumni.

In fact, I was disappointed that Artemis wasn't Arrowette to begin with. But I guess the writers wanted the whole supervillain backstory connection.

Also, confirming, that Cassandra Savage with the missing arm is really Scandal Savage? She's built like her girlfriend Knockout.

(Also also, it was only through watching season 3 did I find out that Cassandra Cain had a different name as Orphan. I only knew her as Batgirl)

Citizen
I found alot of the "quiet" scenes in this episode felt stiff and animated awkwardly. Thankfully the action sequence was just as dynamic as I'd expect from this show. But Artemis crying in her car while driving was so lifeless it really took me out of the emotion of the scene.

Citizen
They definitely seemed like they were trying to save on money on this episode. :/

Citizen
Saw the new ep. Whoa, they brought up the Shiva connection. If I didn't collect the Cassandra Batgirl comics, I would be quite confused.

Didn't expect the innuendo from Josh Keaton's Spectacular Black Spider. He's funny and I'm happy whenever he appears, even tho he kills folks. Who the hex is Rictus? I couldn't even tell if he was male or a female.

I don't recall comics Scandal Savage ever saying she had a sister named Olympia so I'm still not sure if one armed Cassandra Savage is Scandal.

I kinda miss Blue Beetle and even Impulse. I want to see them around again.

Citizen
Rictus is female. Though the wiki says male, she had breasts and a female voice (and actress).

Don't know much about the comics so I was surprised by (and horrified with the details of) the Orphan reveal.

Citizen
It's why the Cassandra that Shiva wants was up in the air as to which one it was to me. Truthfully she may already have the one she truly wants and is using her as bait to take out a less important issue. Cassandra (Cain) was introduced as a new Batgirl around the same time as the original Young Justice team in the comics. Orphan is a rather recent identity they have given her since Barbra has retaken the Batgirl mantle in the last decade or so. Between Tigress, Spoiler, and Orphan though all three have Villain's in their parentage.

But Rictus is someone I know nothing about so she's a wild card in my eyes. Don't know if she's an original character or based on someone else. But it's DC and there's quite an open window for villains I know nothing of there. Never even knew Black Spider was a thing until after YJ used him. Kudos on Weisman for keeping Josh Keaton from Spectacular Spider-Man to voice him.
You must log in or register to reply here.
Share:
Facebook Twitter Reddit Pinterest Tumblr WhatsApp Email Share Link
Top Bottom