Just remember that these are Mega.nz uploads, which have a data transfer quota for free viewing. You may need to pace out how much you view each day.
U

Kup said:
My head canon used to be that Bluestreak and Huffer died giving Hound and SS cover, long enough for them to get to the space bridge, arrive at Cybertron, hitch a ride to Moon Base 1, and that’s how Prime found out about the attack — that Blaster’s transmission didn’t make it past Earth orbit or something.

Oh the joys of the 90’s and early 2000’s, looking for ways to reconcile a cartoon from your childhood.
Click to expand...

I always assumed the road crew (minus Kup) got stuck outside the city. When arriving on Earth Primes shuttle rescues them, but not before Huffer is killed.

Shadewing said:
One thing I think I actually do like about the concept of this script, is the idea that it attempts to start off like just a regular episode of the series, and then kinda rug pulls you.
Click to expand...

This does have a lot more S1 vibes in many parts.

Citizen
In all seriousness, it is neat to see what is essentially the "Pokemon Gold Prototype" for the Transformers movie.

Staff member
Council of Elders
Citizen
And our wiki won't pretend to be unaware that it exists for some reason.

Citizen
Well, can a moderator merge these threads together?

Well, unless I'm forgetting something; we don't see every Season 1 character either. Fair point.

Staff member
Council of Elders
Citizen
Merged. That stuff ended up on page 2.

CoffeeHorse said:
Merged. That stuff ended up on page 2.
Click to expand...

Citizen
Here's something else fun that Chris McFeely hosted at TFNation, the Matrix Test:

Citizen
I've been given clearance for the next stage of showcasing this script. Back in January 2021, I completed a 16k word detailed outline of the script, having read all 210 pages thoroughly to make sure nothing was missed. Done my best to approach it impartially and from the perspective of someone reading it when it was received in February 1985. With no reference to what came later, save for the little sub-headings I've put on the story beats.
Now at last, I can show my work to the public: https://sunbowmarvelarchive.blogspot.com/2022/11/detailed-outline-of-very-first.html 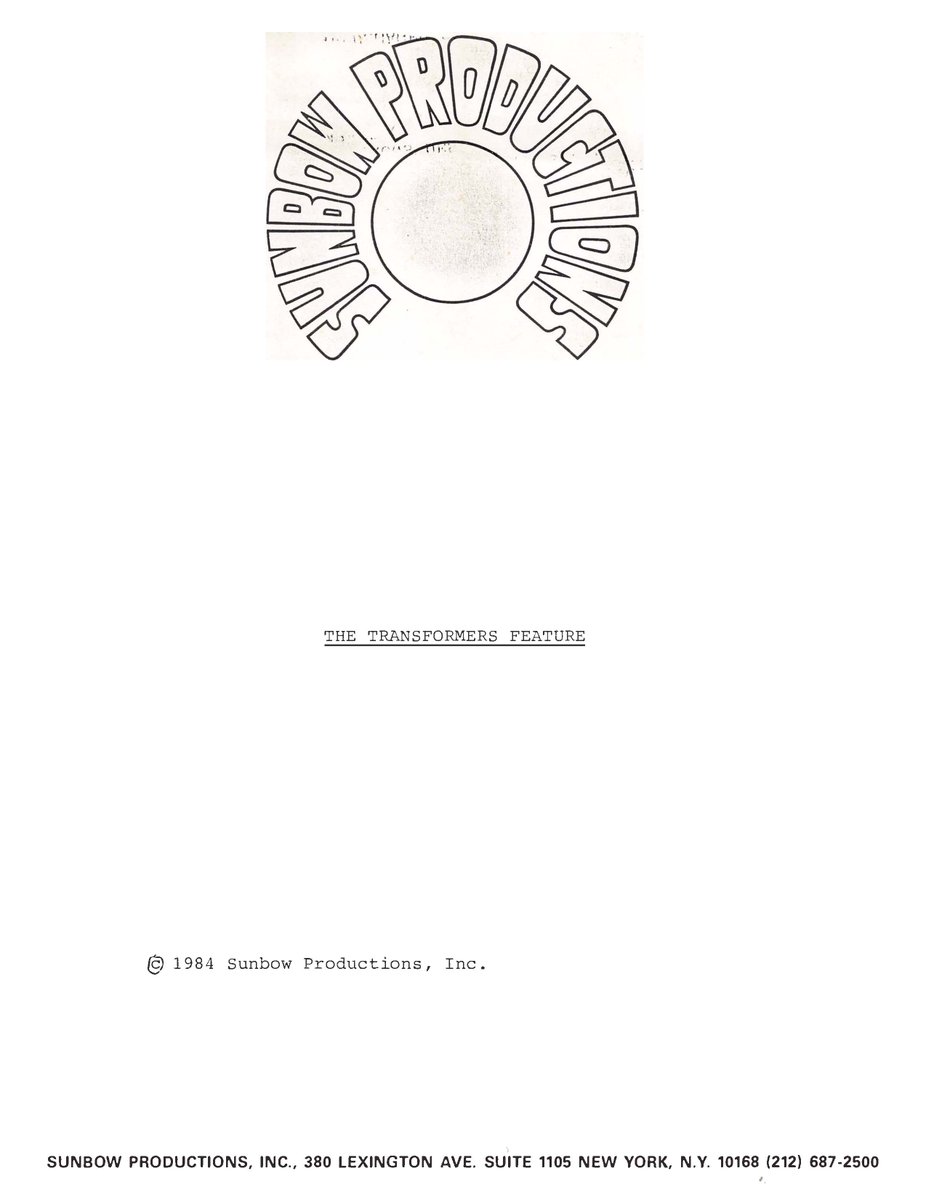 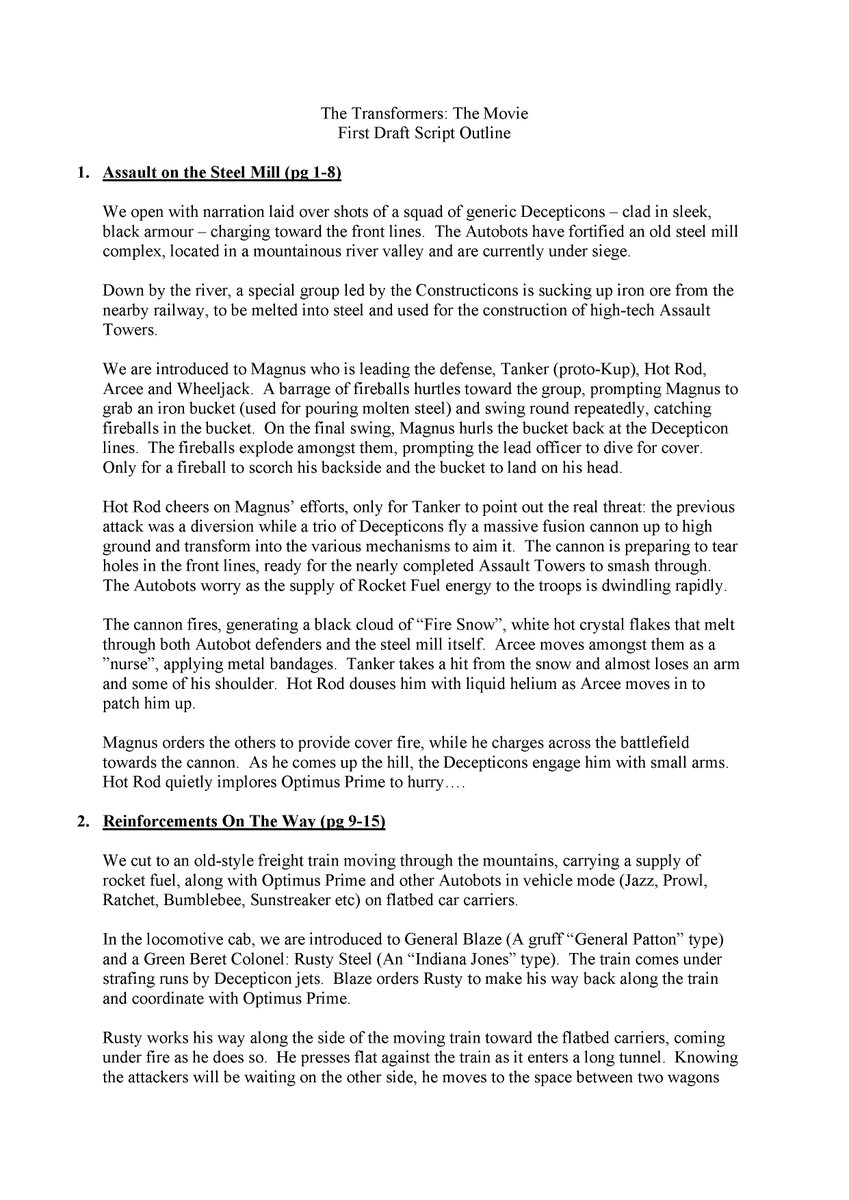 Citizen
Well. That was a fun read. And I’d love to see this adapted into an alternate universe retelling of the original movie, after a few revisions. Gonna spoiler tag my big takeaways since I don’t want to ruin it for those who want to read it too.

So I really liked the fact no pre movie characters die except Prime. It feels less like a movie “to sell toys” and more like just a normal (if you can call it that) movie script. Ironic that featured characters like Prowl, Ratchet, and Brawn specifically mentioned in your summary don’t survive the final movie.

I also liked the fact 84 characters had stuff to do. Huffer, Gears, etc actually had speaking lines and took part in action sequences.

Did I miss the destruction of Cybertron in the slides? First I caught that was reading this today.

Sad that they’re a couple of missing pages. I can see those having been turned in to other parties for revision, since they seem to come at important parts of the script.
Thanks for doing this. Much appreciated.

Staff member
Council of Elders
Citizen
I'm not going to pretend that this would have been better than the movie we got, but Unicron was a much better villain here, and I feel Ultra Magnus and Galvarton have a stronger rivalry. I agree that an adaptation would be really cool to see.
G

Citizen
Hopefully the follow-up panel from the next day will be posted as well.

Citizen
Finally had a chance to watch all four videos. Boy, did I sure get a lot of little details wrong in my write-up.

Broad details were fine, but little things were confused in the second-hand reports on Discord and Twitter that I was going off of.

Staff member
Council of Elders
Citizen
Care to retype it? My speakers are fried.
G

CoffeeHorse said:
Care to retype it? My speakers are fried.
Click to expand...

This may help. Back in November 2020 when Jim scanned the various pieces of this script and sent the files to me for merging and OCR, I did a quick 5-page "Beats" outline.
Unlike the detailed outline above, which is meant to be impartial, this outline is my live takes from when I first read it as a fan of over 30 years. 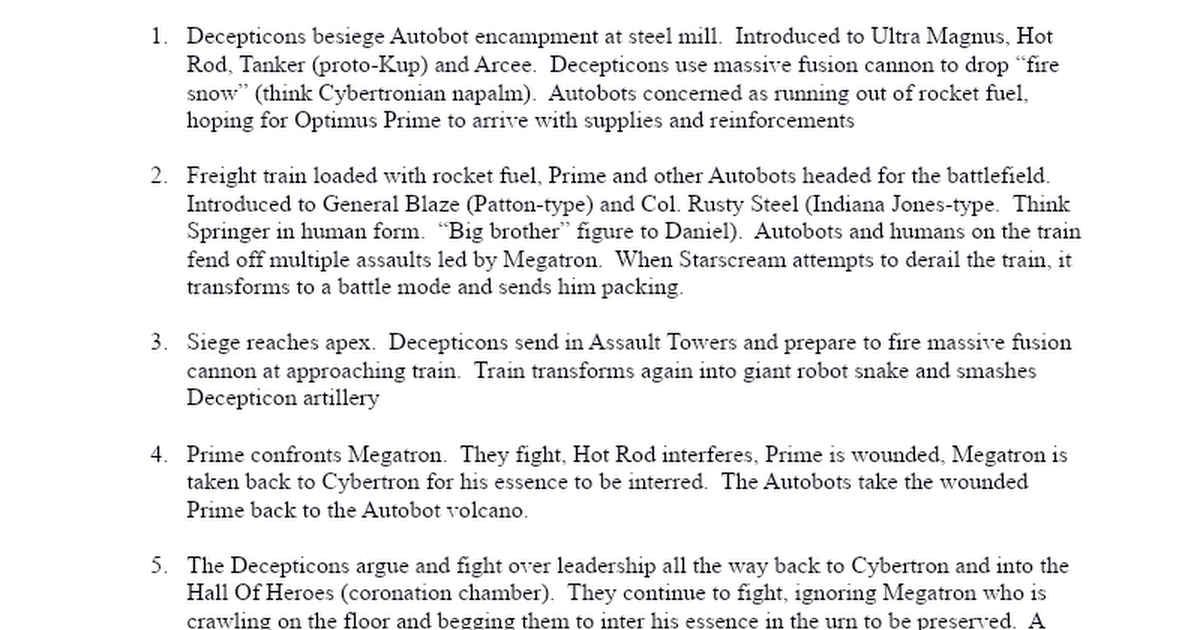 We fade out on the Autobots and humans of the story in a huge victory parade.

It obviously needed some trimming, but I'm still surprised by how much of this version I do like. We got robbed of an interesting Unicron.
K

It obviously needed some trimming, but I'm still surprised by how much of this version I do like. We got robbed of an interesting Unicron.
Click to expand...

I was thinking the other day about how we now have two (mostly) complete drafts of the movie and how different yet similar they are.

That got me thinking about how I wish we still had IDW or a comic license holder with a few years under their belt. Then, they could do a couple of “What If”-style miniseries featuring these drafts. I’d love to see the Anibots and Rails canonized, and Kranix’s original death sounds like it would have been fun to watch.
You must log in or register to reply here.
Share:
Facebook Twitter Reddit Pinterest Tumblr WhatsApp Email Share Link
Top Bottom