Citizen
Well, that was certainly an episode of Star Trek. Kinda feels like the weakest of the three so far. The writers really need to work on their subtlety because this certainly wasn't.

Citizen
I liked it. I've seen a lot of complaints about it giving us too much too soon, but I consider that a feature, not a bug. I won't deny that I might just be scarred by the dragging pace the rest of live action modern trek embraces and how it refuses to revel in its characters, but imo they are 3 for 3 so far.

Citizen
Landing party that brings back contagion is a classic Star Trek episode type. It was going to happen sooner or later, regardless of the state of the real world.

Citizen
We knew an episode on genetic modification was coming sooner or later, but damn this show is not going to be tiptoeing around things. Maybe a bit early to be doing something so weighty with the characters, but it does help that we know them all better than we normally would by now. Not quite as good as the prior two, I think it suffers a bit from squeezing the two 'forgiveness' plots into the one episode, but it was nice to see Pike and Spock take a relative backseat so that Una and M'Benga could be the stars. It's a welcome contrast to Discovery and Picard, where there's always one 'star' and everyone else supports.

The solution to the infection seems a bit like magic if you don't know that chimaeric antibodies are actually a thing, it's how you 'trick' an immune system into accepting proteins from a different species. So a medication is usually developed and tested on mice, that then has to be modified so that a human can accept it. Don't tell the anti-vaxxers. So I guess what happened is that when the warp core flared, La'an re-infected Una, whose immune system then passed antibodies back through the infection vector, the light, to create the chimaeric antibodies. Could have been explained better.

Citizen
I thought what happened was that as the warp core containment field dropped, both got a (un)healthy dose of radiation that triggered Una's immune response, which then transferred to La'an somehow, which then led her to create the antibodies for the light virus (as well as sorting out the radiation damage) that Chapel used to help make a cure for everyone else on board. It felt a tad convoluted.

As for the episode as a whole, I think it was my least favourite of the three episodes so far (the whole "lockdown" and "contract tracing" stuff felt a tad on the nose), but it was still a good story and it still had plenty of good character moments.

Una's personal log at the end, wondering if she was only forgiven because things worked out in everyone's favour actually really got me thinking. We'd all hope that Pike would see it the same way regardless of the outcome, but things are a lot easier to look past in a best case situation.

I also really hope that Dr. M'Benga's daughters' condition is followed up at some point.

Citizen
I enjoyed it and while it did feel a tad on the nose, that's Star Trek. The blessing of an episodic format is they don't have time to be subtle.

Well, she's about ten generations away from Khan, so it's likely she wouldn't have any of his intact DNA (unless Augment DNA acts differently, which it might).

Her dialogue suggested that she was teased by other kids, which doesn't say anything about her official status (as we should all know, bullies are monsters who will say whatever they need to to inflict pain).

Citizen
She said she's not augmented, just that she was bullied for her ancestry.

Staff member
Council of Elders
Citizen
This is the best Star Trek we've ever gotten since BEFORE Enterprise. This nails the formula perfectly without being completely dull. I understand they're using a lot of tropes that are used in every franchise, but I loved every second of this show.

There are probably a few nitpicks I could levy at it, but it's refreshing to narrow it down to the most minor of details. And despite being somewhat reliant on "legacy" characters, we got some pretty cool info dropped. In 3 episodes these characters are more likeable and three dimensional that most characters in Disco were in 4 seasons. 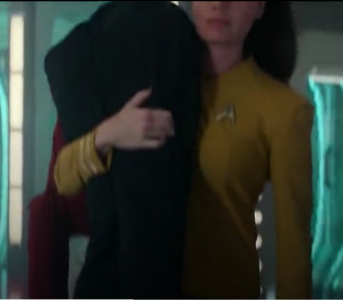 Citizen
Pike's hair got a bit out of control this week.

Citizen
I'm really appreciating how well they are invoking the feel of classic Trek without it feeling like a retread, even making it feel fresh and relevant to issues today with the 'misunderstood culture bigotry' thing.

Also, on an entirely too nerdy note, seeing Number One and Christine Chapel in the same room. Also talking to the computer. If there is a heaven, Majel Barrett is laughing that they need three people to be her.
M

Citizen
Honestly if the entirety of the two planned seasons is just the quality of these 3 eps then I'm golden. I hated Picard and Discovery felt really weak until the future stuff which still wasn't good but was at least was more interesting to explore.

This just feels like star trek again. The crew actually feel like they belong in Star fleet, no tech that feels weirdly super out of place, able to tackle political stuff without being just aweful at it.

Dvandom said:
Pike's hair got a bit out of control this week.

It's does seem to get stacked higher and higher each episode.

ZacWilliam, where the artists kept making them a little bigger each issue to see at what point someone would stop them.

Citizen
The longer this show stays good, the more I feel like I'm going to be disappointed when the other shoe drops.

This episode really reminded me of "Starship Down" from DS9. It had everything from
trapped crewmen to the gruff commander needing to alter their managerial style to having to get inventive with the last remaining torpedo.
Good stuff all around.

I actually tried to watch that aftershow they do, but I couldn't make it through more than a minute.

Citizen
And what's this?
A ship fight in Star Trek that doesn't feel like a weak imitation of Star Wars, but actually maintains tension while following Star Trek logic? Is this possible in the year of our lord 2022? That was some TWoK shit!
I'm not even sure what else to say about this week's episode that it doesn't say for itself. Chapel is best girl. I might have more to say on a second viewing, but we're covering a lot of ground in the kinds of Trek plots the show is tackling, and this fairly grim story set inside a small-scale altercation was a nice shift after three episodes of classic TOS "the Enterprise encounters a planet that teaches them a lesson about friendship" stuff.
I ******* love the subversion of the established pattern for the show at the end. I have been very much enjoying the long, didactic speeches each episode ends with, the letters to Princess Celestia, not least because the first episode knocked it so far out of the park with that double-meaning speech from Pike to the audience with the big Day the Earth Stood Still themes. And then this episode goes and gives us two words. "We survived." ******* brilliant.
Last week took me for a ride, because the entire first half of the episode felt like setup for a weak TNG episode, and then it started hitting with the character beats and didn't stop. Also blows my damn mind that we're addressing the Federation's issues around augmented folks head-on this early in the series, yet another fact about this show that felt like it was made just for me and my pet hangups. I still think it's the weakest so far, which might put it below the very best episodes of Discovery in a series that's right on course to be the best since DS9.

Citizen
Sometimes “doing what you’re known for but really well” is all it takes to fulfill both fan and critical appreciation.
S

MrBlud said:
Sometimes “doing what you’re known for but really well” is all it takes to fulfill both fan and critical appreciation.
Click to expand...

The sad truth is that Star Trek has been trying to NOT be Star Trek for so long...I'm not sure a LOT of casual viewers even remember what ideals the franchise was built on. Orville tried to remind us...but I felt its association with Family Guy and Seth MacFarlane kind of skewed perception of the show.

Strange New Worlds knows what it wants to be, knows how to do it, and is doing it's damndest to do it well. Thus far, its delivered the best Star Trek experience I've had in decades.