Citizen
Well I just got an email saying my amiibo's shipped! I also got emails saying both orders were getting ready to ship, so I'm hoping for confirmation of the Special edition soon!
S

Citizen
Yeah, Kraid kinda lost his mojo after the first game, but this one turned him back into a proper challenge. I liked the way that fight ended, but given that he was already hip deep in magma, I'm not sure why dropping him a bit further was fatal. I've got a sneaking suspicion that he was either an optional boss, or could have been fought much later. I haven't run into much of anything that needed the diffusion powerup.
K

My kids when I finally got it: “are you happy now?”

Citizen
Kids never had a Metroid growing up. They don't understand. We've never had to wait for the morph ball like this before.
T

Citizen
my only gripe at the beginning was there was a linear progression and very little time to explore areas and look for hidden paths or items. Not as linear as Fusion, but similar. As I went on it got better, as there are sections where backtracking is necessary but not obvious, so you’re required to explore.

Citizen
It really does make you fight for everything you get...including the ability to move about more freely. At least it does open up abit quicker than Fusion, which kinda herds you for most of the game.

Making you fight for everything you get is kind of a double edged sword. On the one hand, I don't think I've felt such a sense of accomplishment getting a simple beam upgrade before. On the other hand, c'mon, game! Cut me a little bit of hugging slack!

Citizen
It’s been an adjustment not being able to squeeze in those tiny spaces early on. But I like that the spring ball isn’t a separate power up to find this time around.
T

Daith said:
It’s been an adjustment not being able to squeeze in those tiny spaces early on. But I like that the spring ball isn’t a separate power up to find this time around.
Click to expand...

I think Fusion did the same. Definitely a good thing.

Citizen
Agreed. It's kinda weird, but my experience has been that you run into a real item drought where you don't get anything for a while, and then it just rains items all around.

Like except for a 2-missle expansion here and there, I got nothing for the longest time. Then all of a sudden...BAM! Spread-shot, morph ball and Varia Suit all within 5-10 minutes of each other.

Citizen
Yup, and then it was like where do I go! All over again for an hour or two.

Well I'm probably half way through the game. And oh boy......

These birds never learn to throw the trash away!
T

Citizen
I thought it was a nice throwback to Fusion, reintroducing the X mechanics.
Also, for how late you get the Gravity Suit, there’s a hell of a lot of underwater exploration prior to actually getting it.
Last edited: Oct 10, 2021

Citizen
Right now Kraid's kicking my butt. I can get through the first wave just fine, then it's like, what do I do now? 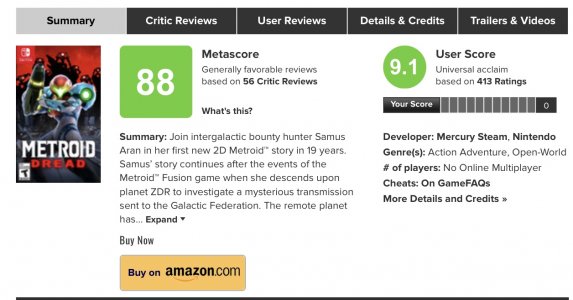 For anyone who cares what Meta Critic has to say.

Citizen
This game is hard. Old school hard. But that really good old school hard that gives you a sense of accomplishment. I'm enjoying it a great deal.

Caldwin said:
Right now Kraid's kicking my butt. I can get through the first wave just fine, then it's like, what do I do now?
Click to expand...

Yeah, that where I am, several attempts and had to forfiet for the night. 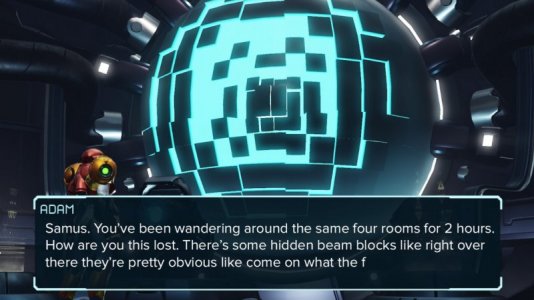 Citizen
I finally beat Kraid. So now it's after 11:00, I want to get to bed but I have so much adrenaline in my system now.

I'm finding it really useful to watch other people on Youtube. Like, things I NEVER would have seen or done that makes things a lot more manageable.
S

Citizen
The item pacing feels kind of weird. The spin boost is basically an altered high jump, but it comes much later than the high jump usually did, and not that long before the actual space jump. Likewise, the cross bomb is an interesting new ability, but I got it maybe an hour before the power bomb. I think that both of those abilities could have used some time on their own before a similar but stronger ability showed up.

The spin boost also needs something to differentiate it from the space jump. As is, it's strictly worse. Oddly, I could see it working in a Prime game as is, just being the double jump while the space jump gets turned into the proper space jump from the non-Prime games.

Caldwin said:
My small collection of what I could manage to get of the Metroid series. It's not much. I wish I could some day get somewhere even close to owning all the games.
Click to expand...

...how many do you think there are?
T

Citizen
My thought at the end of the game: