PrimalxConvoy said:
but I think I recall this was due to a request by Honda themselves?
Click to expand...

That would make sense, 2021 is the 40th anniversary of the original Honda City.

Citizen
Just got Reboost and Skids (and pre-ordered Crosscut). I'm just so happy with the alt-mode, that I haven't transformed them yet. I checked the TFWiki bio for Reboost ( https://tfwiki.net/wiki/Reboost ) and they kept mentioning how "popular" the (turbo) was, but a Top Gear review (see below) stated that the (turbo) didn't catch on and was discontinued soon(ish) after release. It DID seem to impress the head of Honda, though (see the video below). I can only assume either the regular "R" version (which Reboost is based on) was more popular than the "turbo 2" version and/or the main reason the car got a "more important" bio in Reboost's instructions was due to the (rumour?) that Honda partly funded/promoted/was behind this release, in order to celebrate its 40th anniversary, or something.

-
And here's a "walk-around" of the red "R" version: -
Here's an advert for the original red Honda City R Diaclone toy: 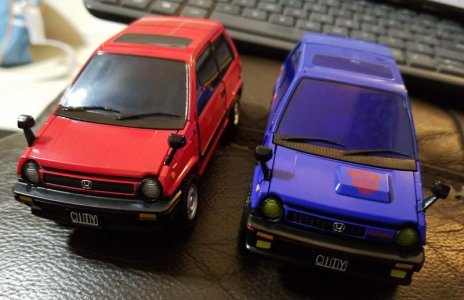 Citizen
Reboost's official MP profile. It is... something else.

HONDA CITY-R
It’s been many a long and arduous road before Reboost came face to face with the Honda City R. He was originally part of the Autobot Outer Planetary Support Squad, taking the form of a surveillance satellite. After a long service in space, he successfully positioned to join the defense force of the allied planet Engali. He soon thought of his position as part of a noble family’s citadel defense team as his vocation. He accepted orders from the Engalian House of Peers without a second thought. In order to deepen the planet’s alliance, Reboost was even put forward to marry the heir of a certain major family. The 8-gendered Engalians have a complicated and bizarre marriage system, but Reboost found he got on well with his potential spouse, named Merai, and they agreed to the marriage. Sadly, it soon became clear that the noble houses were after Reboost’s special ability, and he soon became embroiled in a dispute between the various princes of the houses. Reboost lost consciousness after an attack, and was moved to a research facility on another planet. When he awoke, Reboost found he’d been disassembled, with his life core being examined under the name “Component X”. Secretly hacking into the facility’s network, Reboost found that the Engalian traitors had formed a conspiracy with a division of the corporation known as Marlboor, and that Merai and his other spouses were safe, but already married into other families. But just as one relationship ended, another began. He had found some of the enemy’s spy data on a car from Planet Earth: a red Honda City R. Realising at once he had no other options for a vehicle mode, Reboost began to plan his escape to Earth. Distracting the enemy using holomatter avatars, he set about rebuilding his core into an autonomous Motocompo-type device, then used the facility’s ground bridge to travel to the Sol system’s warp gate. From there, he hitched a ride on a cargo ship to Earth. As he landed, he found that his destination was under attack from the Decepticons, putting a human city in danger. He rushed to a nearby parking garage, and finally found and merged with his long-awaited Honda City R! Injecting nanovectors and transplanting his life core, he turned the City R into a super robot lifeform, transforming into an Autobot warrior and counter attacking the Decepticons. Reboost, having undergone a splendid rebirth through the City R, became the new defender of the city.

REBOOST
After a long interstellar mission filled with galactic hardship, Reboost has finally been assigned to Autobot City on Earth, gaining a new vehicle mode and a new city to protect. Now he rejoices in all the planet has to offer. He has a cheerful social life and diverse hobbies: giving people rides around town, multispectrum landscape photography and cy-fiber weaving, building new relationships all the while. Starting with Cosmos, he’s come to get along with many Autobots. That said, he’s clashed with Tailgate, who views Earth machinery as living beings.

Reboost carries a number of weapons specialised for urban defense. His mid-size laser gun can rapid fire laser dot rounds can hit an aerial target at 150km, and his Rocketbot shells can create an energy-weapon dampening field of up to 300 metres. At close range, his double laser gun turret can project destructive hard-light blades that don’t harm humans and buildings, hurting only enemies. His recon drone, Component X was constructed with his own life force and personality component, allowing it to perform complex reconnaissance and maneuvering using holomatter avatars, as well as retreat while carrying his life core. His in-born Boost Key ability allows him to reactivate the life functions of organic and mechanical beings alike, also allowing him to temporarily boost the power of both himself and others. While this does boost morale and can bring back those on the brink of death, its restorative powers are limited by Reboost’s lack of medical expertise, introducing an element of randomness to its powers and limiting its overall use.
Click to expand...

Citizen
Skids and Reboost arrived today. I like them quite a bit. Remind me of the Datsun trio.

Citizen
Masterpiece MP-52+SW Skywarp has been released. The bio mentions he became Cyclonus.

● Inscription on the right ... "Attack when the enemy is not visible"

Skywarp is a member of Destron's flagship aviation soldier / Jetron since the corps was formed 9 million years ago. A talented soldier who is loyal to Megatron and always faithfully carries out his orders. At Cybertron four million years ago, he was on a mission to block the roads around Iacorn with Thundercracker. He was the first Transformers to awaken on Earth when Teletran 1 repaired, and he was also the first to repair the main Megatron.

As the name of Skywarp suggests, his greatest ability is his ability to teleport at distances of up to 4km in an instant. The effect is enormous, and there are occasions when Megatron asks for permission to warp. If used during a battle, the enemy loses sight of the Skywarp, or secretly teleports to covert actions, or surprise attacks from unexpected places. That Megatron also praises Skywarp as number one if it does such a job.

Skywarp was the mainstay of Destron for a long time, but it was reformatted by Unicron in the animated movie "Transformers His The Movie." Reborn as an aviation staff cyclonus. Although his appearance changed, his loyalty remained unchanged, and he continued to serve the New Destruction Emperor.

Citizen
Not surprising. Takara settled on Skywarp long ago back in the United storyline "Macrocosmic Seekers". It's Hasbro who remains deliberately undecisive to let fans continue to choose who they prefer. 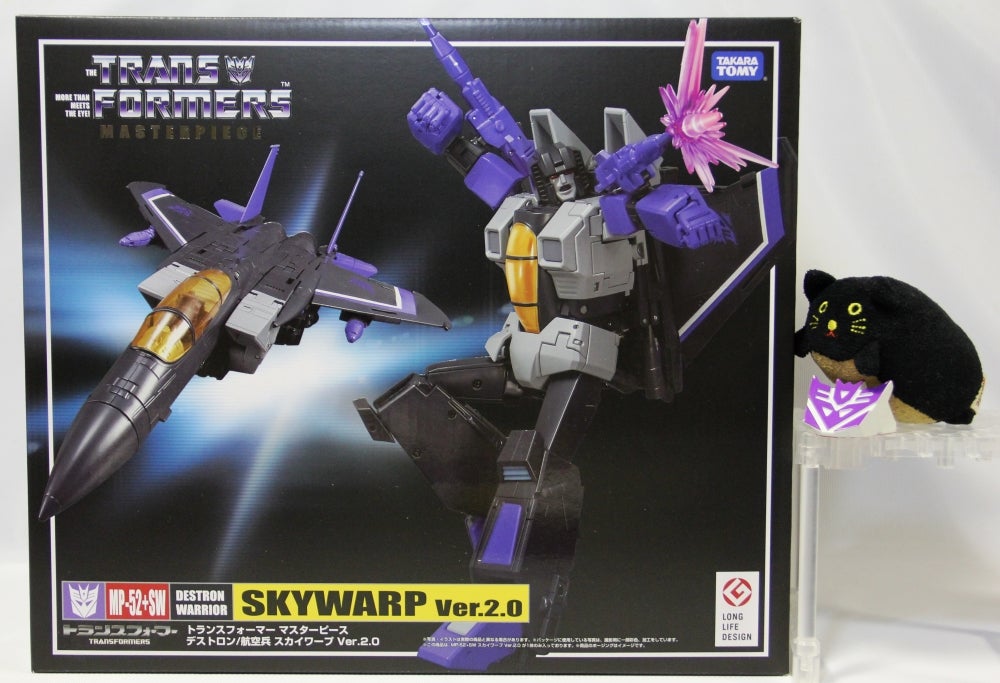 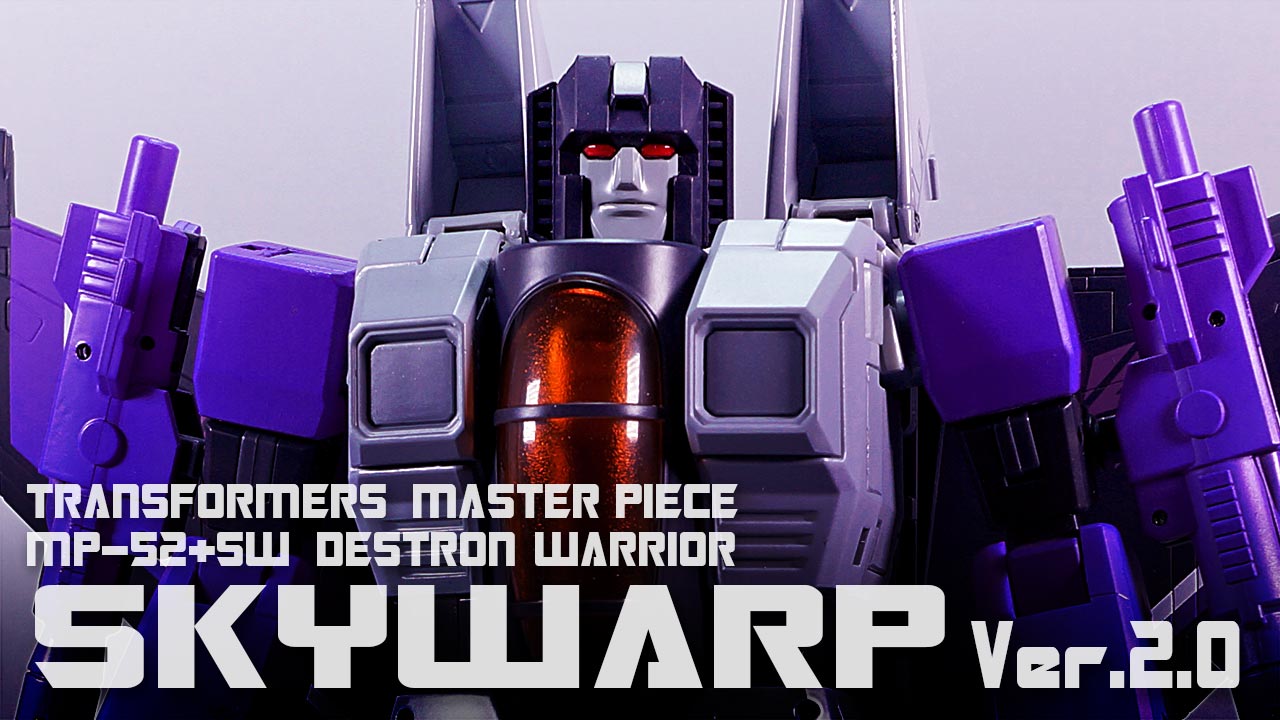 Citizen
For me, I see Cyclonus as Skywarp and Scourge as Thundercracker. Then it makes their rebirth even more satisfying when Starscream croaked after being their "leader" for so long.

SteveMegatron said:
For me, I see Cyclonus as Skywarp and Scourge as Thundercracker. Then it makes their rebirth even more satisfying when Starscream croaked after being their "leader" for so long.
Click to expand...

That's what I thought to which is why I always associated the two with their reborn counterparts.

FYI, this isn't new news. Just the image is new. Front page makes it out as if this is the first we've heard of it.

Staff member
Council of Elders
Citizen
Sorry, Randy. It was the first I'd heard of it

lastmaximal said:
Sorry, Randy. It was the first I'd heard of it

No source given but our first pictures of MPG Getsuei. Note he forms part of the thigh. Seems full reveal / preorders on the 13th.

Citizen
Are the actual trains really that off-white color or did Takara color sample some vintage toys that had been in the sun for a while? I'd have figured the whites would have been brighter on both him and Shoki.

Blot said:
Are the actual trains really that off-white color or did Takara color sample some vintage toys that had been in the sun for a while? I'd have figured the whites would have been brighter on both him and Shoki.
Click to expand...

Haven't seen any real life photos of Getsuei's train mode, but Shouki's is that off white.