I'm still waiting for most of my wave one to arrive, but I doubled-dipped for an early Evil-Lyn and it was so worth it. Between the fondness engineered by the show and the Good Toyness, she's just one of the greatest action figures I've ever owned.

Meanwhile the second Netflix show, the babby one, is only days away now and the toyline not far behind it. Plus Mega Construx, Funko, blah blah blah.

And the Dark Horse Revelation prequel! Issue #2 blew everyone's mind by apparently discarding the Keldor backstory in favour of something much older and sillier.

There's an insane amount of product piling up. It's a crazy great time to be a MOTU fan.

Citizen
I still haven't gotten my Mosquitor or Castle Greyskull from BBTS. I'm beginning to get a bit irked.

Citizen
Oh yeah! I forgot that people were finally getting Mosquitor too. Feels like he was announced a decade ago.

Staff member
Council of Elders
Citizen
I'll probably pick up Teela for Revelations and not get any more after that. I've got Skelegod, Skeletor, He-Man and Evil-Lyn (And Battlecat) but I just can't see myself collecting the whole line when I already have a shelf full of origins.

Citizen
I really just don't like Teela's design in Revelations. I did pick up Skelegod, Skeletor and Evil Lyn.

Battlecat looks nice, but I already have Origins Battlecat and just couldn't justify it.

Citizen
I love the Teela redesign. I think everyone looks great probably, with the exception of Tri-Klops' technopope hat.

Basing the wave 2 figure on MAA's original look instead of his look through the bulk of the show is a huge mistake I think,

Citizen
I took the time to look at the motu megaconstrux stuff the last time I was at TRU... and I gotta say: if I had more money (in general.) I would be all over that stuff.

Citizen
Finally ordered the battle armor deluxes and they arrived this week. I'm not thrilled with the paint work on He-Man's face. It's the first real disappointment I've had from Origins, quality-wise.

OTOH, the vintage head is much nicer than I expected. I'm not a fan at all of that original 80s He-Man head look, it's pretty ugly. When I got Faker I thought okay, this isn't so bad.

Not a fan of either BA Skeletor head though. I'll take the original Origins there thanks.

Citizen
Love my Battle Armor Skeletor (had him as a kid) and just picked up Faker to join him.
I am not so into the Masterverse Figures. Origins scratches the itch way better for me. I’ve got a few of those WWE Masters figs too.

I wish I didn’t miss out on Man-E-Faces though.

Citizen
My original plan was to skip Masterverse, or maybe cherry-pick if they hit certain characters I can't resist, because they're so far removed from the (lower case c) "classic" aesthetic that they don't hit the nostalgia buttons like Origins does.

But then I loved the show, and Kal posted pictures of his Evil-Lyn in this thread's predecessor and I was like... okay. I'm in. Lyn is still the only one I've had in-hand, I have been waiting two weeks for a package that made it from BBTS to Australia to finish the last three hours from Sydney to Canberra. But on the strength of that Evil-Lyn figure, I am SUPER in love with Masterverse. He-Man's head sculpt is super goofy and doesn't seem like a great representation of its animated counterpart, but I've heard a bunch of people say that this stuff is better in person than photos suggest.

Very keen to see what the first batch of non-Revelation figures looks like, because we have no idea what else this line is going to get up to.

Citizen
I really don't like the show (don't get me started). But there are a few of the toys I just couldn't pass up. 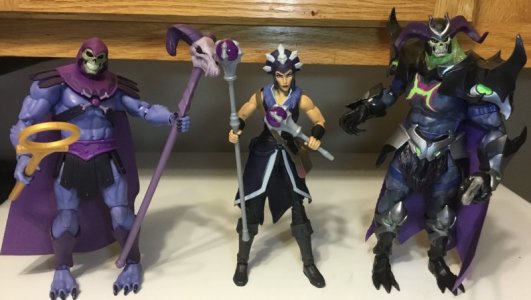 Citizen
I'm looking forward to the second half of the Netflix show.

Btw, these unofficial MOTU-inspired figures will be sold at a convention, for 50 dollars for a 2-pack or 90 dollars (plus extra accessories) for a 4-pack: 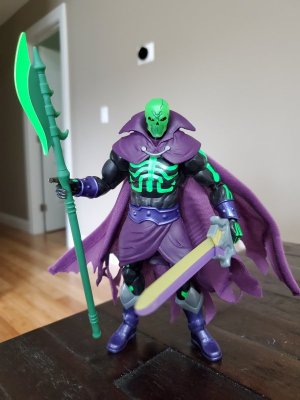 Citizen
I gots me a small Fisto. Haven't opened him yet tho.

Fero McPigletron said:
I gots me a small Fisto. Haven't opened him yet tho.
Click to expand... 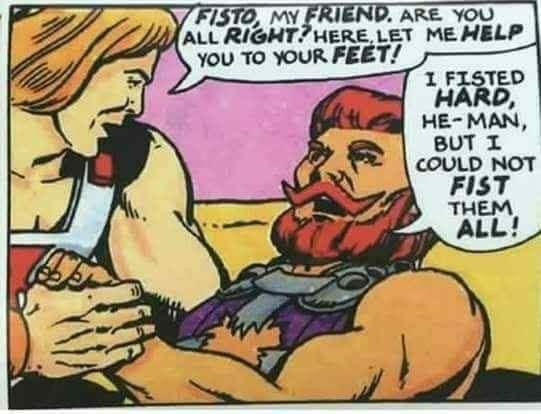 Does any part of him other than the head do any kind of glowage? I thought I'd heard there was some sort of black light effect or something but then I watched a couple of reviews where the dudes were like "head is standard GITD, there ain't nothing else, so disappointing, D-".

Does any part of him other than the head do any kind of glowage? I thought I'd heard there was some sort of black light effect or something but then I watched a couple of reviews where the dudes were like "head is standard GITD, there ain't nothing else, so disappointing, D-".
Click to expand...

Everything that is green on his body and the power sword's yellow and purple "glow" under black light. Only the head and sword halves are glow in the dark plastic. None of the green paint glows in the dark.