Citizen
This might be overkill, since I've talked about this book before, but one last time can't hurt.

The Best of Rarities one-shot came out today. Mostly reprints of old G1 UK Marvel stuff, and some stuff that was planned for the UK Volume 6 trade collection that will never happen from IDW, now. And probably most notably a few never-before-seen newspaper style strips that never saw print anywhere else. You can see a list of the contents below:

It's a nice little package. And it's probably the reprint book that is most worth picking up. If you're not familiar with G1 Marvel UK...You're going to be confused, just because of the Straxus-Megatron stuff, but it's a fun nostalgia trip if you ARE familiar with these stories. And some of these stories are legitimately hard to find, even just scans online.

It might be for hardcore fans only, especially at the price, but it's a solid special.

Citizen
The strips were pretty good, especially the one explaining the Decepticon leadership in the comics.
L

Citizen
Just saw an ad for Shattered Glass II. It says that it is a five-issue monthly series starting this month. When does IDW's license for Transformers end?

Citizen
I think it ends at the end of 2022. I know we have Shattered Glass 2, the rest of Last bot Standing, a Best of Bumblebee, I think a best of Starscream (not sure on that one, I could be making it up). Not sure about anything else. Don't know what I will do without a monthly Transformer Comic fix. The only other regular comic I get anymore is TMNT.

Citizen
I think we all assumed it was at the end of the year, but I don't think we have a hard date. The "financial" end date might not line up exactly with the calendar date, so it might extend to January or Februrary.

Chances are the eventual publisher change-over will work like with end the of IDW Phase 1. Any books end around the end of the year. Then the next summer they'll start up the next book...whoever ends up with the license. I can understand not wanting to overshadow IDW's end, but it's weird we didn't get ANY news at SDCC.

Shattered Glass is cutting it close, though. Also, it's just a weird note to end YEARS of publishing on...but I'm assuming it's something Hasbro wanted. *shrugs*
Last edited: Aug 4, 2022

Citizen
It's entirely possible that Hasbro hasn't yet finalized who will be picking up the comics.

Whoops I sure failed the math at that one...

Citizen
I just figured that since SG2 was going to be a toy pack-in as well, it was covered under a slightly different license.

Citizen
Are they still going to be putting out the hardcover collections?
I've been using those to catch up with idw1 after dropping off around revolution.

If not guess I'll work on gathering up what I have left to read on my own.

Future_Erika said:
Are they still going to be putting out the hardcover collections?
I've been using those to catch up with idw1 after dropping off around revolution.

If not guess I'll work on gathering up what I have left to read on my own.
Click to expand...

Do you mean will they keep publishing them to cover off the end of the books? Probably not at this point since they're not solicited but it's not impossible.

If you mean will they keep publishing them after the license expires at the end of the year, definitely not unless the new license holder licenses the works from IDW and reissues them. Which they might but I doubt they will retain the same structure/start near the end of the run.

Citizen
I've said this before, but while it's possible there's some sort of carveout to allow IDW to finish publishing their hardcovers, if that were the case, I imagine they'd be crowing about it from the high heavens, because otherwise the assumption is that the set will never be completed and that'll discourage sales of the items already solicited.

Given IDW has been mum on the matter, I don't think they'll be finishing the hardcover collection.

There will always be that one issue that gets delayed.

Major bullet points
- this hasbro universe isn't catching my interest, the earth military stuff has always been my least favorite aspect of this continuity
-oh based on what I'm seeing on twitter things are starting to look pretty trans and sapphic! maybe I should catch up at some point!
-wait it's ending??? should I even bother?
-going to wait and see what the vibes are like before I give this new continuity a chance
- Arcee, Greenlight, and their kid are super cute maybe it's time to dip my toes i... oh IDW is losing the license? great, wonderful

Citizen
For me I got in about the time of Escalation, and I loved the new modern take on the concept, with the bots and cons disguised on earth fighting a cold war for resources. While it was mostly S1 characters, they weren't afraid to throw in some later characters and fan favorites and the spotlight and miniseries really let them show off so many corners of the universe. Then they decides sales weren't good enough and pivoted to the G1 obsessed "All Hail Megatron" which turned me off after the first volume. I didn't show back up until everyone was losing their shit about the post war MtMtE/RiD stuff, which got me back in for basically the duration. I even went back and collected the stuff I had missed just so I'd have the context. I mostly enjoyed the series after that point, though the scattershot shoehorning in of all the other Hasbro stuff was a bit of a disappointment, especially when they wound up axing the whole thing with Unicron.

I greatly enjoyed the reboot series, but that was mostly due to the bomb-ass world building. It had pacing problems that I could overlook, but I know turned off other people, and was such a massive ensemble that it was more about character moments rather than character development.

I appreciate IDW frequently going whole hog and treating the entirety of the Transformers canon as a potential source to mine ideas and characters. A lot of people want reboots of specific series, but Transformers is so damn big that I like the idea each entry being it's own assortment of classic and new characters. Animated was good about that too and I'm glad we saw it extend into Cyberverse and now apparently Earthspark.

I'm a sucker for Transformers so I'll definitely give whoever gets the license next a looksie, but I may wait until the first trade.

LiamA said:
There will always be that one issue that gets delayed.
Click to expand...

Bold of you to assume only ONE issue will get delayed.
L

Agent X said:
Bold of you to assume only ONE issue will get delayed.
Click to expand...

Citizen
Started reading idw2, finished the first volume yesterday, despite not being done with idw1
What an amazing accomplishment it is to make such a boxy bossy woman like Termagax but give her a generic enough design that I feel no desire to have her as a toy
(still really like her as a character, she sucks) 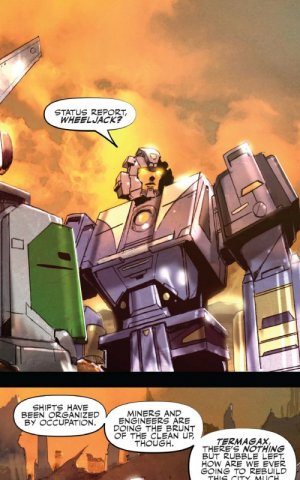 Why'd they give both Orion and Megatron moms? Not complaining it's just a little funny
Overall I find the whole political situation less interesting and more sterile, but I'm liking a lot of the parts