Citizen
Liar! I can't believe anything you say now. It's like I don't even know you anymor.

Citizen
got it watched and...it was good. not as good as the first 2 seasons, but i still very much enjoyed it. bring on season 5! in probly a year...

Staff member
Council of Elders
Citizen
Watching Season 3 again so the wife can get caught up so we can watch season 4!

Citizen
I have to say, Season 4 has some good points, low points. I'll admit for most of it, it just seemed like the usual "Daniel and Johnny trying to get along but screwing it up" rehash that they'd already done in past seasons. I enjoyed it well enough, but it just felt like "here we go again."

But holy crap, those final two episodes! They really brought it around. Maybe it's the adrenaline rush talking since I did just finish it just a couple minutes ago. But man, they really set up season 5 to be crazy.


Silver betrays Kreese. Kreese backs off. Kobra Kai wins and shuts down Daniel and Johnny's dojo. The return of Chozen, teaming up with Daniel to fight Kobra Kai next season.
The holy shit quotient of the last two episodes really made the season.

Holy cow, the last two eps! Also technically the 8th ep (with the mature rating, haha). Excellent fights and use of music. The sound carry overs (carry unders?)woold do well in a collection, unless purists cry foul.

I was going to ask about the rules on gi grabbing and when a hit counts or a block but, well, never mind.

I hated the deal with Daniel's son. Geez. Loved seeing that one person; waiting two hour was worth it.

Shouldn't the loss of the award winning 80s Whoopir Goldberg Oprah Winfrey movie count as a criminal offense? Like, that was a dangerous incident. But same with the home invasion and seemingly almost attempt murder (ish?) from the last season.

Loved it but also hate having school trauma flashbacks while watching it. I'd like it better if it was just the adults and select few of the kids.

Btw, I'm going to assume we'll have a special guest star next season. Who's a cool iconic 80s action star who could come back? Danny Trejo? Lorenzo Llamas?

Citizen
I really enjoyed this season, but yeah, it's carried by those least 2 episodes. The alliance falling apart did feel like a rehash, but the lesson learned at the end felt very solid, and I hope it actually sticks this time.

So I was at Target today and found Cobra Kai blindbags, with sort of Funko Popish figure keychains. They were $6.99 which feels too expensive for blindbag bag hangers/keychains. But since we had $3 off coming via the app rewards I felt around for the only one I wanted, the Cobra Kai logo.

I'm gonna be honest, I had very little hope for it being decent, but this is pretty nice. 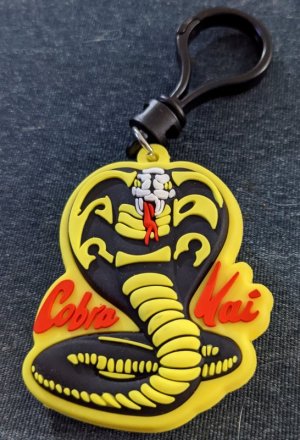 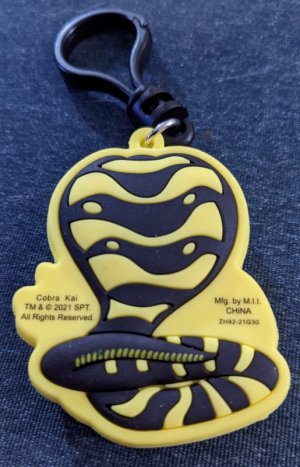 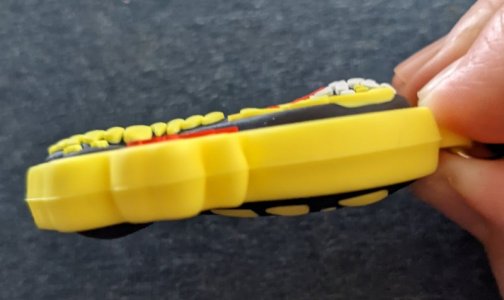 It's surprisingly chunky, solid and heavy. Detailed and sculpted/molded on both sides and actually feels like I wouldn't have been ripped off at $7.

I know some of the officially licensed merch for the show can be hard to come by at fair prices from I've looked into, since I've wanted something like this for a while. So if anyone has been looking for some decently nice quality merch the blindbags don't actually feel too overpriced. I can't comment on the figures since the simplified, big head designs don't appeal to me, but I'd imagine it's similar quality.
Last edited: Jan 5, 2022

Citizen
I just learned that Thomas Ian Griffith (aka Terry Silver) is actually a year YOUNGER than Ralph Macchio.

Weird! I guess his height helps make him look older in the third film.

1. Miguel just giving up seemed a bit much. After everything that happened in season 3, I thought that he would be more focused on the tournament with his head being pre-occupied by his jealously of Robby with both Sam and Johnny. With him running off to find his dad, I don't know where his character is going to end up. I have to say that I haven't been that impressed with him this season.

2. I was never fond of Robby as a character, I thought he was just a teenage jerk. His turn last season was lame, and pretty much continued to be until he started working with Kenny. When he realizes how he failed Kenny as a role model, I liked that it caused him to come back to his dad. I felt that gave us one of two bright spots in the finale.

3. Kenny going all the way to the Darkside just got annoying as it hurt the one bit of character development Anthony had. I guess that is something for them to resolve next season. Anthony and his friends were a bit annoying this season. I get that they had to be bullies to push Kenny into Cobra Kai, but the whole arc just got repetitive and went nowhere by the end of the season for anyone but Robby.

4. I say that there is two bright spots in the finale, because Hawk winning was just going to happen with the boys fighting first. I kept saying that only Diaz can beat Hawk, and with their face off again getting interrupted, I knew Hawk would win. Hawk finally getting his mojo back was great, and I hope him and Moon stay together with him learning how to be himself without being a jerk.

5. Tory finally stopped snarling every time she was on screen and started to be a more realistic character. I liked how Kreese inadvertently set her on the path of redemption with Sam's mom. I wonder how long it will take her to let everyone know what she saw.

6. The second bright spot was Daniel at the graveyard. When it reveals who he is talking to, I lost it! I can't wait to see how that works next season.

7. Returning characters of Stingray and Aisha were great! I think that Sam didn't get right inspiration from her for Tory though. Stingray was great, and I especially like how he was used by Silver in the end. I wonder if Silver will keep his word. Either way, I hope to see more of both characters next season.

8. Silver was great this season. I like how deep his plans went, and how he truly showed Kreese's weakness to him. I can't wait to see what he does next season and see if Barnes comes back. 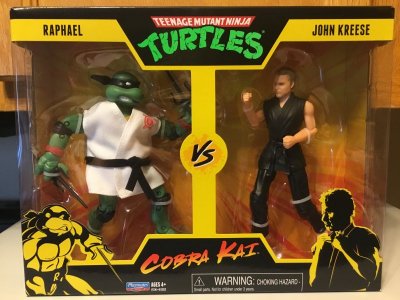 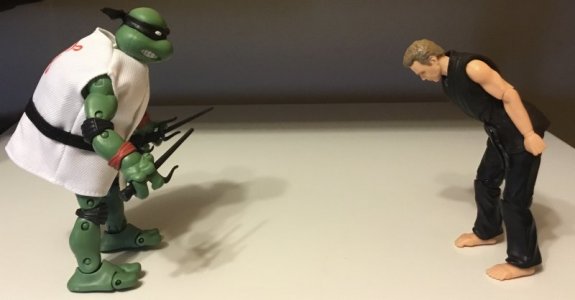 Pizza does not exist in this dojo, does it?

Citizen
wasnt really expecting this, but am also not surprised by it

Citizen
I will say that these aren't exactly the best looking figures ever. I mostly bought it because I just don't see much in the real of TMNT and absolutely nothing of Kobra Kai.

The turtle looks good enough. But Kreese looks absolutely awful. It's close enough that you can tell it's supposed to be Kreese...but especially seeing some Youtube vids, it looks like they used the same mold for all the Kobra Kai figures and just gave them different tops and heads. The arms are absolutely hideous.

But like I said, I haven't seen any Kobra Kai figures anywhere. I'm sure if I went to BBTS or something, I could find a NECA type $50 figure or something. But two figures, $40, in house at Target...it'll do.

Dammit! Use a spoiler tag! I haven't finished Season 4 yet so I hadn't realized they were bringing in the Ninja Turtles!

I can only assume that Hawk gets exposed to mutagen and becomes an actual mutant hawk?

Citizen
I am kidding, but now I've become intrigued by the concept.

Citizen
Part of me wants to see Kreese vs. Shredder, but I think it would be very one-sided in Shredders favor.

Caldwin said:
I will say that these aren't exactly the best looking figures ever. I mostly bought it because I just don't see much in the real of TMNT and absolutely nothing of Kobra Kai.
Click to expand...

ive actually seen a few cobra kai stuff, though not in person. and its mostly labeled karate kid. but as the show is getting steam, we will probly see more. heres what bbts has

Citizen
Yeah, I figured there would be NECA/Diamond Select figures that look better.