unluckiness said:
Dunno, Superion always struck me as the least interesting. At least i can tell the stunticons apart.
Click to expand...

The entire team is made up of jets with paint schemes that are only differentiated by their levels of white, red, and black.

At least the Stunticons have different primary colors.

Citizen
The Stunticons are cars in a line full of cars. Their personalities are that they're thugs in a faction full of thugs. They just never did much for me.

Citizen
They turned Predaking's hands into a crab, his crotch into a gorilla and now his feet are wolves. I am loving this batshit insanity. The swords look like they can be pegged into their Razorclaw's flanks for the blade liger look too.

Staff member
Council of Elders
Citizen
Okay now this Predaking has my attention. This is an acceptable solution to the leftover hands and feet problem. 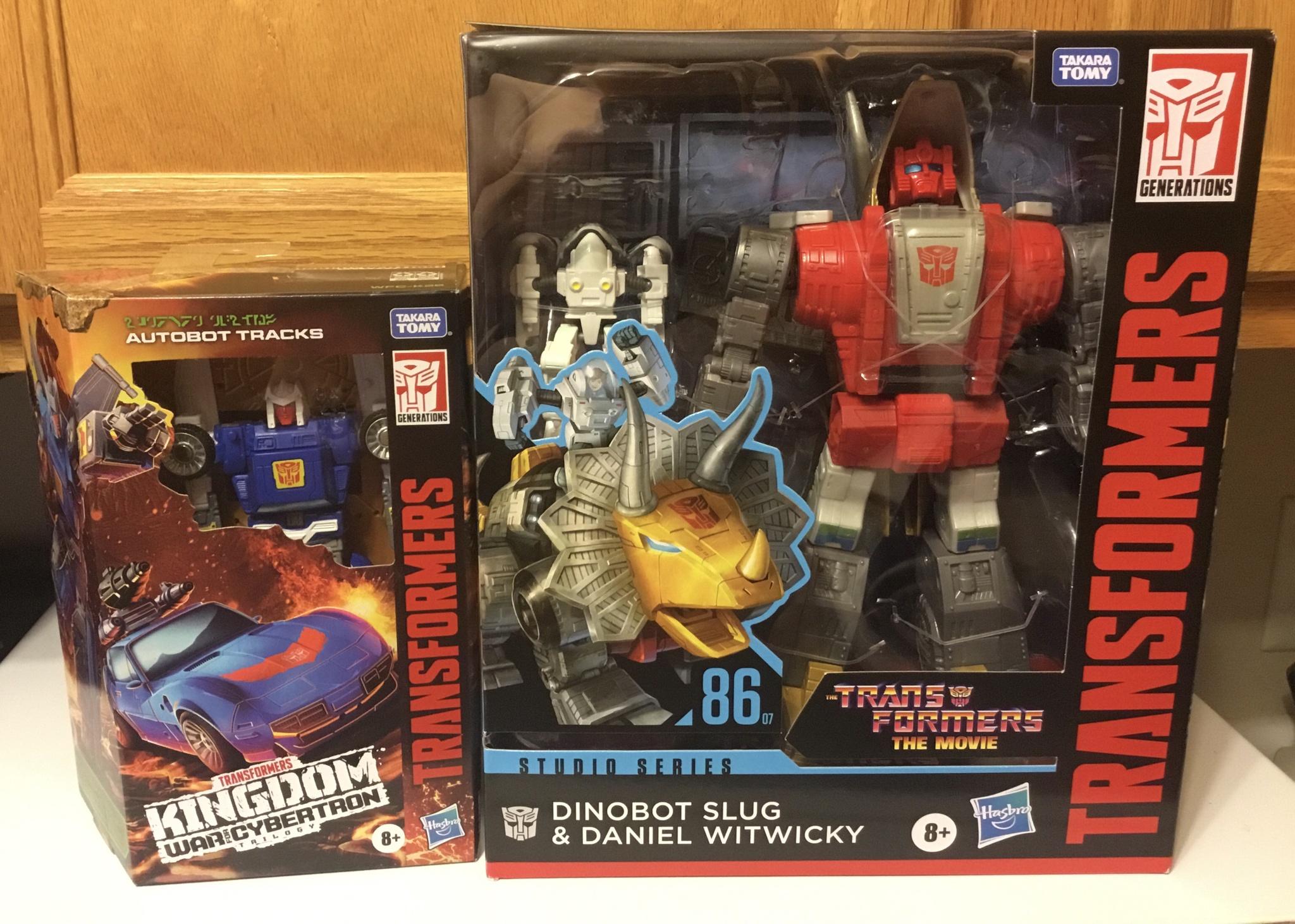 Here's my Target Haul for today. I still refuse to call this guy "Slug." He always has been and always will be "Slag." Why did they start using "Slug" anyway? Was it copyright issues or was it because the fandom started using "slag" as a swear word? Anyway, Tracks and Slag. 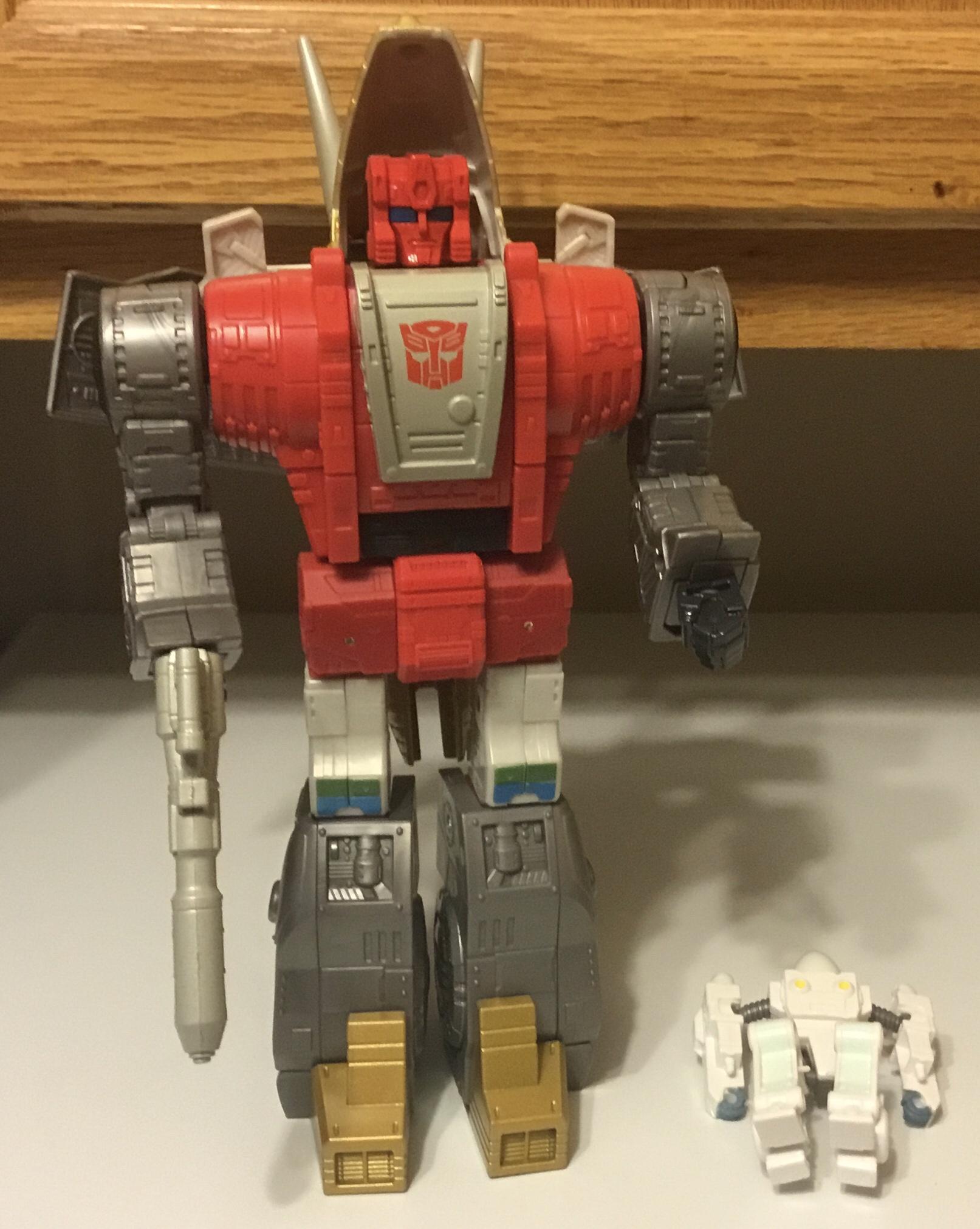 I don't understand why they couldn't have given Daniel some knee articulation. You can move the legs at the waist, but that's pretty pointless because the knees are still stuck in a sitting position. Pointless!

I never did have a G1 Slag even though the Triceratops has always been my favorite dinosaur. So it's nice to finally have a G1 styled Slag. 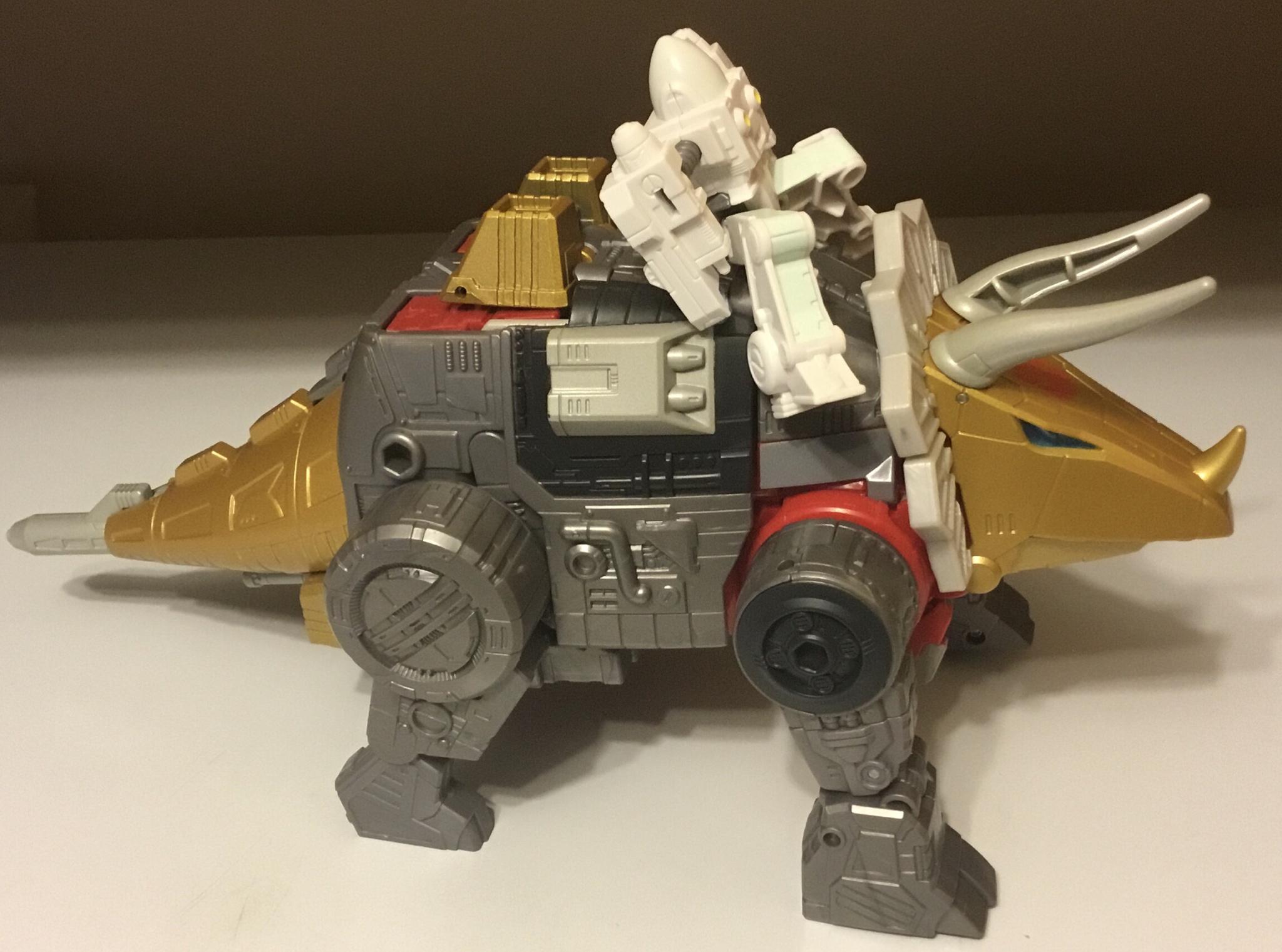 That does not look comfortable for Daniel. His legs are spread open more wide than *redacted*. I could probably just through Daniel in the bin and not look back. But I do like the Slag toy I'll probably keep it in Dino mode. It just looks really awesome.

I'll review Tracks next post. Got more to say about him. 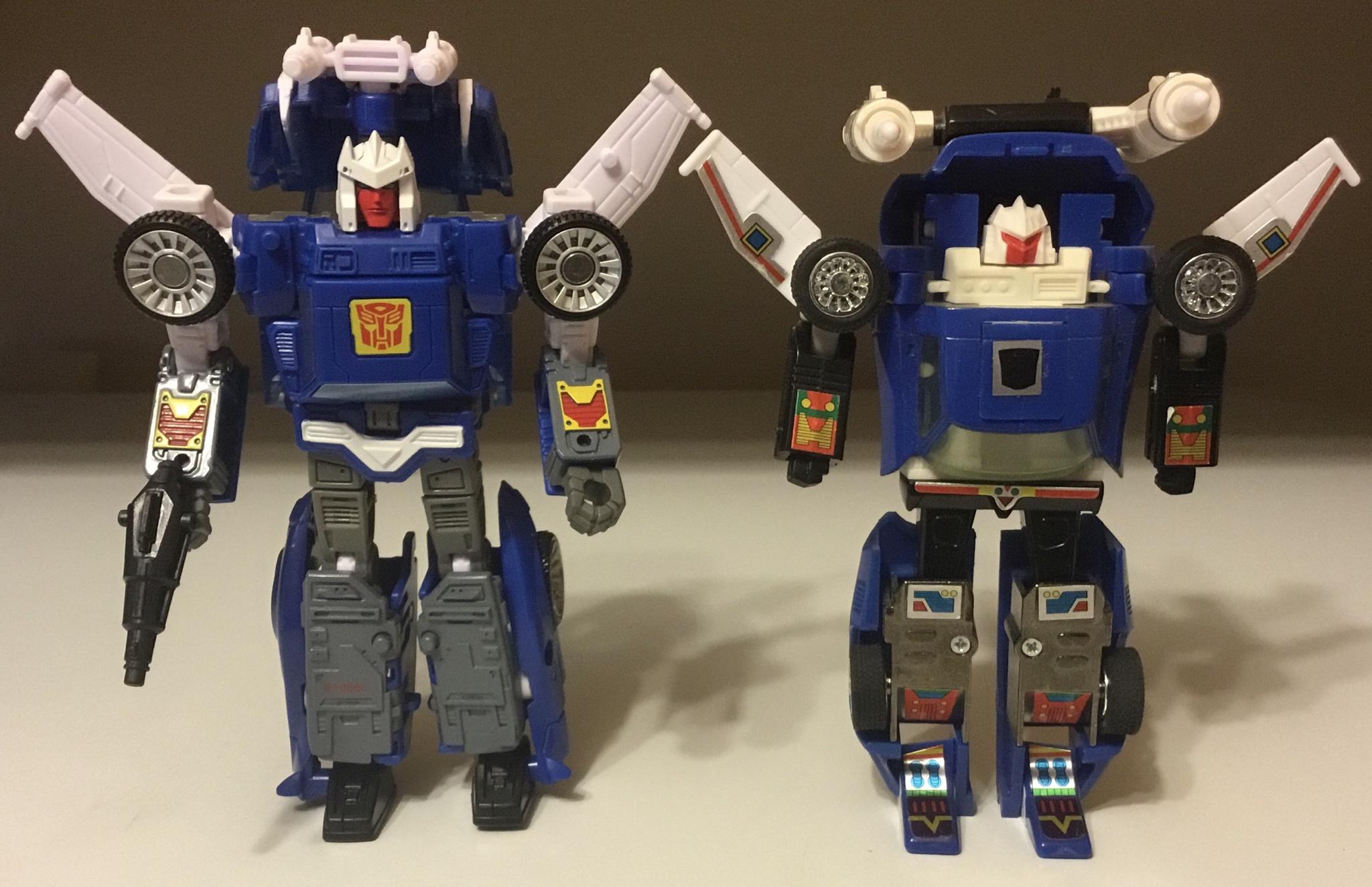 Okay, so here's Kingdom Tracks next to a G1 reissue Tracks. I'd passed it up many times before, but after seeing Notomus's Review for Roadrage, I just couldn't pass this one up again when I saw it in Target today. The head sculpt looks much more toon accurate on Kingdom Tracks, I'll give it that. But it only has paint-apps on the lower arms. Without paint-apps or decals or anything on the wings, legs or knees, it just looks so much duller than the reissue. And as petty as I know this is, I will always be missing the rub-decals.

In the Kingdoms favor, I'm not sure if maybe there was a gun and I just lost it, but given that the reissues hands aren't exactly made to hold a gun, I don't doubt that it probably just didn't have one. And the...I wan't to say shoulder-mounts, but those launchers are well above the shoulders. But whatever you want to call them, they're way less gaudy on Kingdom Tracks. G1 could have had a point in its favor if those missiles actually launched, but thanks to safety standards, any springs have been removed and it doesn't even have that in its favor.

It's really close here because not having paint apps where the G1 has decals is a massive strike against Kingdom Tracks. But other than that, Kingdom tracks does look much better. I'm going to have to go with Kingdom Tracks. 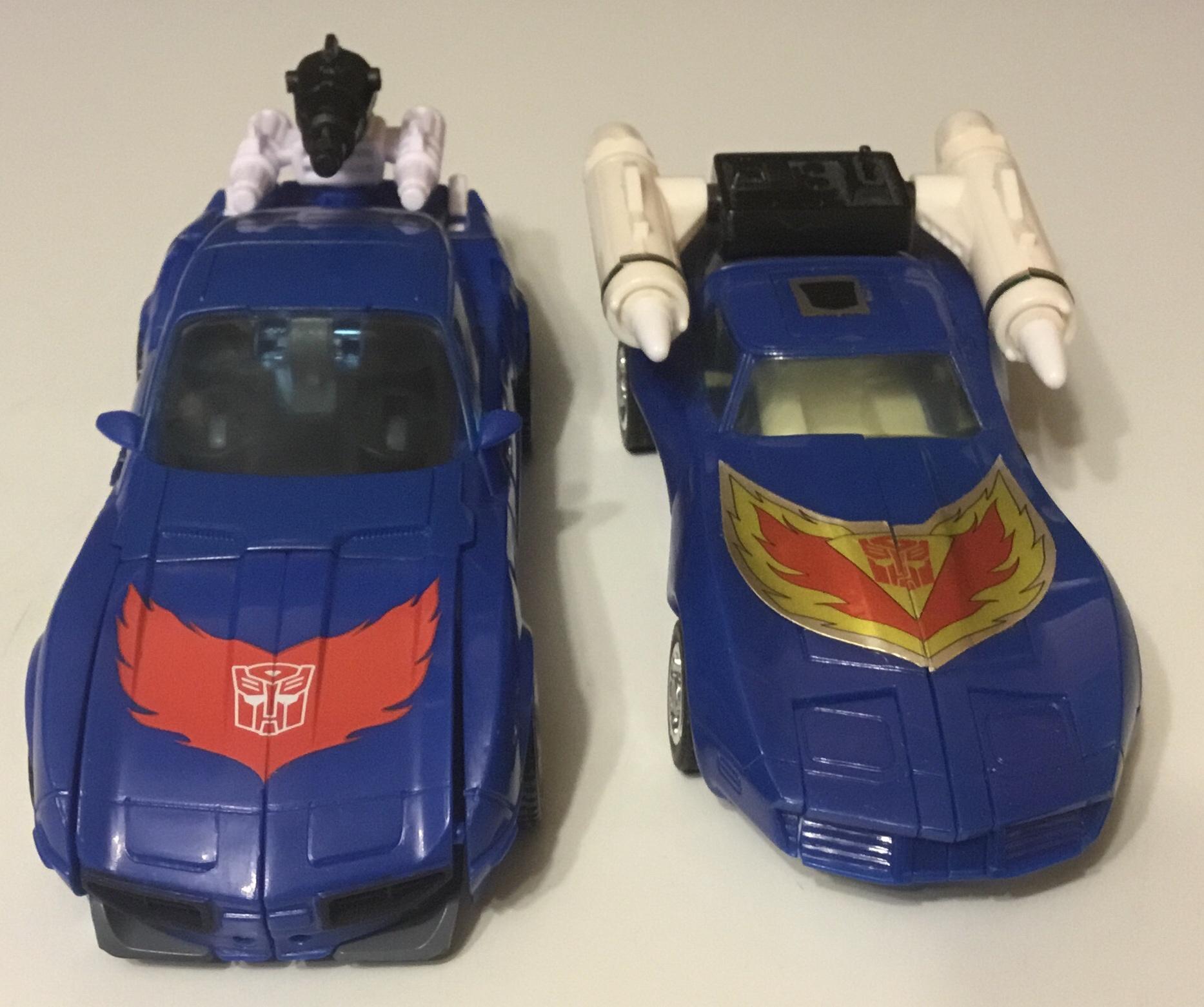 Transformation was a lot easier for the reissue Tracks. I can have that transformed from one mode to the other in less than 5 seconds. Kingdom I had to look it up in the instructions. It's hard for me to judge solely on ease of Transformation. Do you want to be able to transform something fast or do you want a bit to fiddle around with and work it out? Either way has merits. I will say though that Kingdom does have some bits that were difficult for me to get flush. You can even see right in the front where the peg popped out and it just isn't as flush as it's supposed to be. And in that area, I'm going to have to go with reissue Tracks.

As for how the car looks, this is kind of easy. The flame decals on reissue Tracks is a lot more visually interesting. You got a red, yellow, silver gradient that looks really nice with the autobot symbol inside that triangle. Kingdom Tracks is just a solid red flame that, while cool, isn't as cool as reissue. Reissue is also a lot curvier. When it comes to a not-Corvette, the curvier the better. It just looks more fun to drive.

And here they are in flying mode. I will say that Kingdom does have one advantage. It has the tail-fins on either side of the guns. That's actually a very nice touch for Kingdom that I really do appreciate. It is a real nice thing. But again, the wings look comparatively dull without any paint-apps to match the reissue's decals. And the flame paint job is still more interesting on the reissue. Plus the flush bits and curves all go in favor of the reissue.

So when it come to robot mode, I absolutely prefer Kingdom Tracks. When it come to the vehicle, I honestly prefer the old Tracks. I will say that I am glad I have both. Tracks always was one of my favorites in G1 pre-third-season.

Caldwin said:
Here's my Target Haul for today. I still refuse to call this guy "Slug." He always has been and always will be "Slag." Why did they start using "Slug" anyway? Was it copyright issues or was it because the fandom started using "slag" as a swear word?
Click to expand...

Slag is basically the British English equivalent of 'slut', so you can probably see why Hasbro doesn't want to use that name for their character.

I'd never really looked at Tracks before, and his windshield has that "innocent eyebrows" shape and I want to take it home right now

Citizen
TBH, the dealbreaker for me was the horrid flame decal.

Citizen
how soon before Tracks gets done as a hasbro pulse exclusive Lightening Mcqueen figure?

Citizen
G1 Tracks had a gun that fit over his hand rather than the usual peg.

Citizen
Wait, does Slag not have a hole in his left hand for holding stuff?

Citizen
He's supposed to have pegholes in both hands.

Citizen
He does have a hole in the left hand. The quality of the pic...well...it's my iPad, not exactly high quality SLR.

Noip: Thanks. Now that you mention it, I do seem to remember a rifle like that. Problem being, it's probably at the bottom on my Transformers bin along side a bunch of other rifles so that I don't know which rifle goes with which Transformer. It looks like this. It's really not a very pretty gun, to be honest.

Citizen
TFCon had little to show or reveal. It did tease bigass mostly anatomically correct Sludge at least.

Could be legends scale based on the disclaimer though lol Kinda pinheaded but looks incredible. Something nutty is going on with razorclaw since the mane extensions are actually his shins. The splayed out wings also look awful but you can keep them folded up at least

I dunno about these. I don;t need my Dinobots to combine but I do love Zoids. Maybe if they tone down the colors a bit since there's way too much red on Slag and Swoop and way too much gold on Snarl and Sludge

unluckiness said:
View attachment 1982
View attachment 1984
Kinda pinheaded but looks incredible. Something nutty is going on with razorclaw since the mane extensions are actually his shins. The splayed out wings also look awful but you can keep them folded up at least

View attachment 1986
I dunno about these. I don;t need my Dinobots to combine but I do love Zoids. Maybe if they tone down the colors a bit since there's way too much red on Slag and Swoop and way too much gold on Snarl and Sludge
Click to expand...