Citizen
Okay, so, yes, the controls for the N64 online leave much to be desired. Even more odd, I've played Ocarina of Time on the N64, Game Cube, Master Quest on Game Cube, 3DS remake. So I've already played this game a few times over on much better game systems.

SO WHY AM I HAVING SO MUCH DAMN FUN PLAYING IT AGAIN!!!

Citizen
A good game is a good game, even if controls are a tad jacked up.

Citizen
And then I run into the water temple!

Citizen
Still hate the Water Temple, but I finally beat it. And now I also have Epona. I forgot how satisfying it is to get my friend bac.

Citizen
Just a reminder, Zelda Game & Watch comes out today. I already have mine reserved and paid off, so now I'm just waiting to get off work.

Citizen
The Zelda Game & Watch is definitely a step up from the Mario edition. The clock and timer modes are playable, the Japanese and English versions are included for each game (with their differences in tact) and there are plenty of secrets and Easter eggs.

The original square Game Boy aspect ratio is available for Link’s Awakening, so you do not have to play it stretched horizontally. 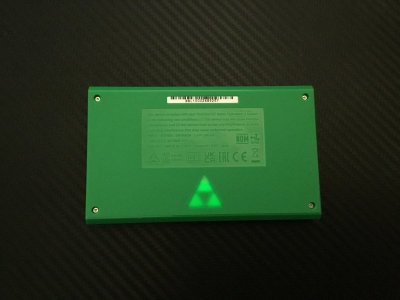 It has been blessed by the three Golden Goddesses.

Citizen
Walmart has the Zelda G&W for $43, so I decided to pick it up, nice little package.

Citizen
Just putting this out there:

If you play the Japanese version of the first game, you'll notice the opening music and several sound effects are different from the English version. I found it worth playing it just for that. No I can't read Japanes, but I've played it often enough I don't really need t.

Citizen
This is one of those times I'm having a hard time justifying the purchase. I love the original Zelda a lot, but 43-50 to play it on a dinky little handheld is a bit much too me. Asventure of Link has never hooked me and I never got through a version of Link's Awakening until the Switch remake. As much as I like the series knowing I'd only use it for the original game just isn't enough for me to buy it when I have so many other options already.

Citizen
It really is more of a novelty buy than something you buy because you want to play the games. I mean, I have these games in so many versions, it's not even funny, including Switch. So it's not like I even bought it for portability. I truly did not buy this as a "I want to play the games" thing. It truly is just a novelty.

That being said, being able to play the Japanese versions of these games is quite interesting. I mean, I doubt I'll ever play Zelda II or Links Awakening in Japanese just because of the whole "I can't read Japanese" thing. But like I said earlier, I've played the first Zelda so many times, I don't need to know what the NPCs are saying. It's just thrilling to see the small differences (music, sounds, killing Vols Voice).

Citizen
I haven't played a new Zelda game since The Wind Waker.

Citizen
Missed out on Twilight Princess and BotW? Not to mention A Link between Worlds for old school flavor. There’s some great games that have come out since 2003.

Citizen
I haven't had a Nintendo console since Gamecube.

Citizen
If you can find a WiiU, it has HD releases of Twilight Princess and Windwaker as well as its own release of Breath of the Wild. I'm pretty sure the e-shop would have even more classic Zeldas. It's the perfect console for catching up if you can find one cheap.

Citizen
I'd have played them back in the day if I didn't hate the motion controls. That hasn't changed.

Citizen
Uh...WiiU, not the Wii. While the WiiU can use the motion controller and is backwards compatible with Wii, it is very much a different thing from the Wii. Motion Controls (more or less) died after the Wii died. The WiiU actually is quite worth with it, particularly if you want to catch up on Zelda games and Metroid Games.

Same, but mostly because Wind Waker pretty much cemented the formula for the franchise had changed into something I didn't enjoy as much as the NES games.

Citizen
Haven't they remade pretty much every good Wii U game for the Switch anyway?