Gundam Discussion: The Wings of A Boy Who Killed Adolescence

Poor Luna is second at everything.

I remember doing pretty well with the Gunner ZAKU Warrior in OMNI vs. ZAFT 2. Maybe I should give Luna a whirl when I get Maxi Boost.

I remember doing pretty well with the Gunner ZAKU Warrior in OMNI vs. ZAFT 2. Maybe I should give Luna a whirl when I get Maxi Boost.

Yeah, she's pretty solid in Full Boost if you've got a good front.  Her main weapon is absurdly good.

Anyone got word when Re: Rise is coming back?

Nope.  Might be a few months until things get sorted with the virus.

Bandai is releasing a new Entry Grade Gundam.  What I find REALLY fascinating about this release is how they are FINALLY re using some of the ideas from Gundam AGE's Advanced series, with a dash of 30MM as well.  It's only a couple hundred yen cheaper than the prior Revive, but it also removes the need for nippers or stickers.  I'm curious if Bandai will offer anything besides the requisite Zakus in this style.  Has a surprising amount of articulation compared to prior Entry type products.

I'm hoping this becomes a "thing" going forward.  I think it would especially be good for many international markets, where models don't have a big presence.  Or even in light of the average Gundam kit available being $15-30, a DECENT sub-$10 offering would be compelling.   I can easily see kits like the Unicorn and Wing Zero EW as being viable with the limitations of the design.

If this keeps up, Bandai is eventually going to release a kit that builds itself for you.

Or all HGs will just become the new MSiA.

We get multiple Origin Zaku IIs and Origin Gundams released normally with the most ridiculously subtle of differences between each, and yet the radically-different Eldoran suits only get one regular release?!

Anyways, have a battleship. 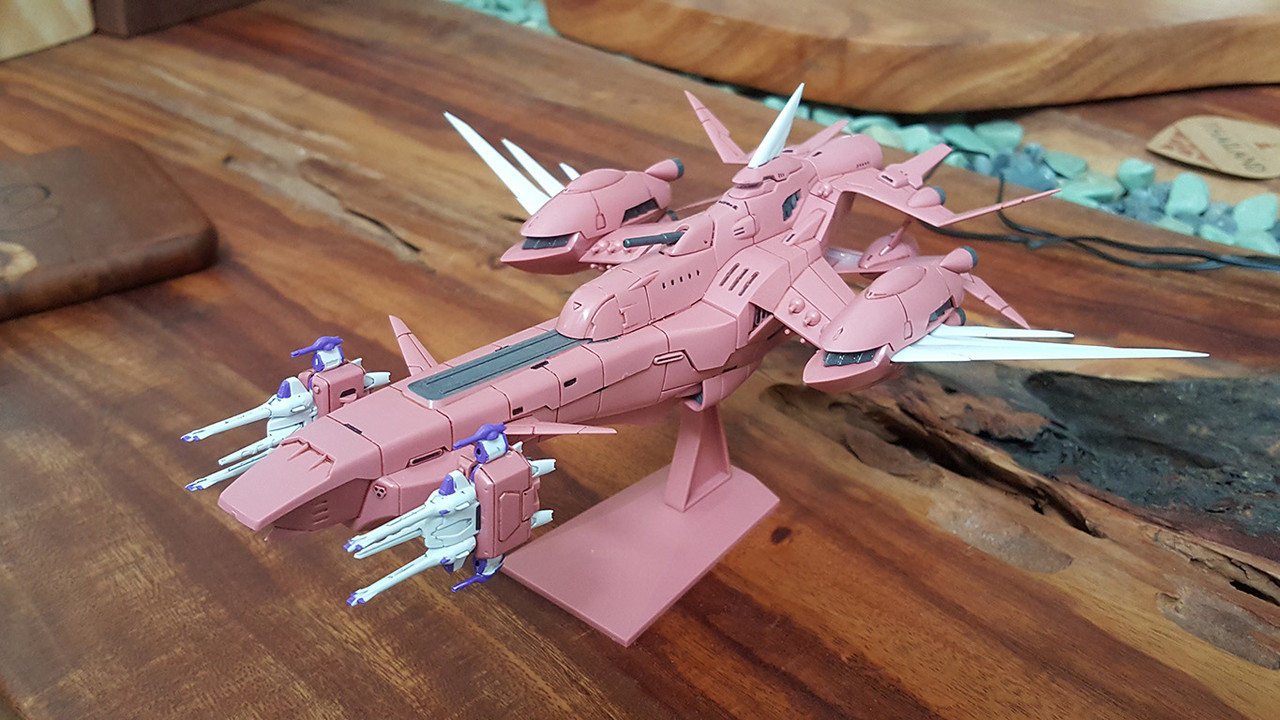 My friend actually gave me this thing two years ago for my birthday; I just waffled on actually building it because of the sheer number of tiny, tiny parts that you need to paint.

It's definitely closer to a 'normal' scale model kit in that regard, rather than the 'easy mode' of typical Gunpla. 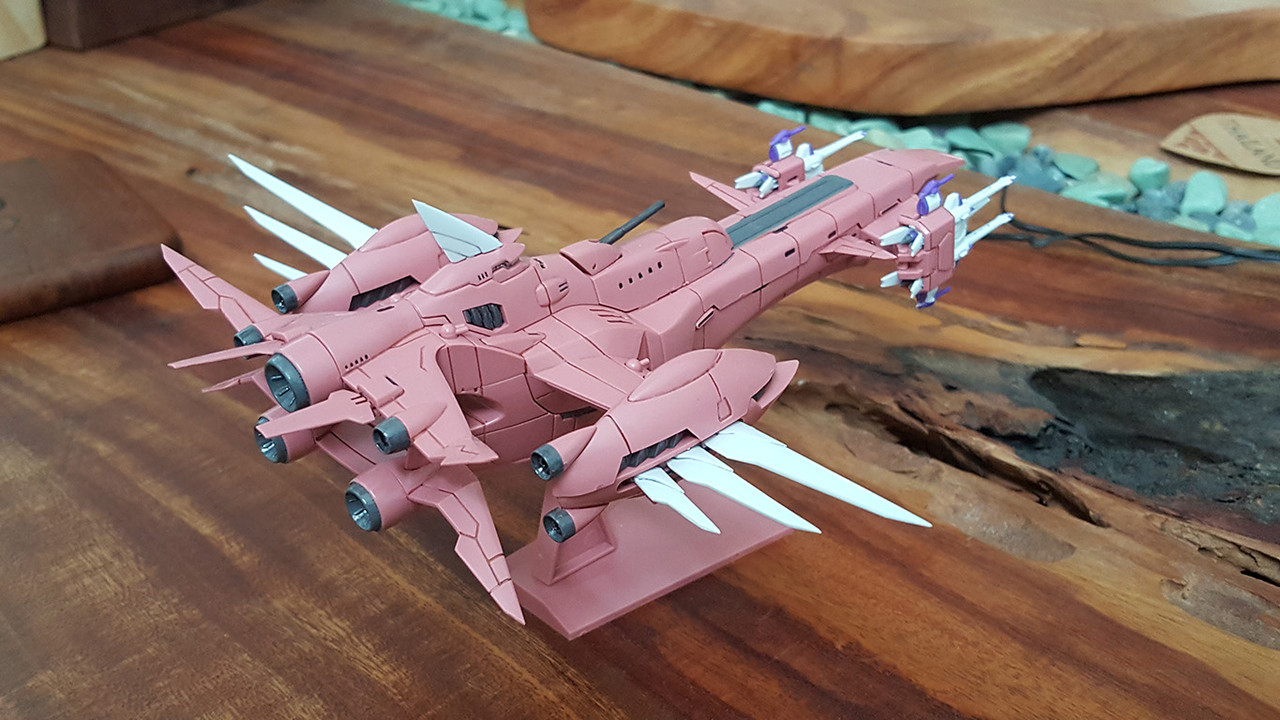 Basically, there's no grey on the runners at all - all the grey you guys can see needed to be painted. And then I messed up since the Eternal's thrusters aren't supposed to be grey on the outside. 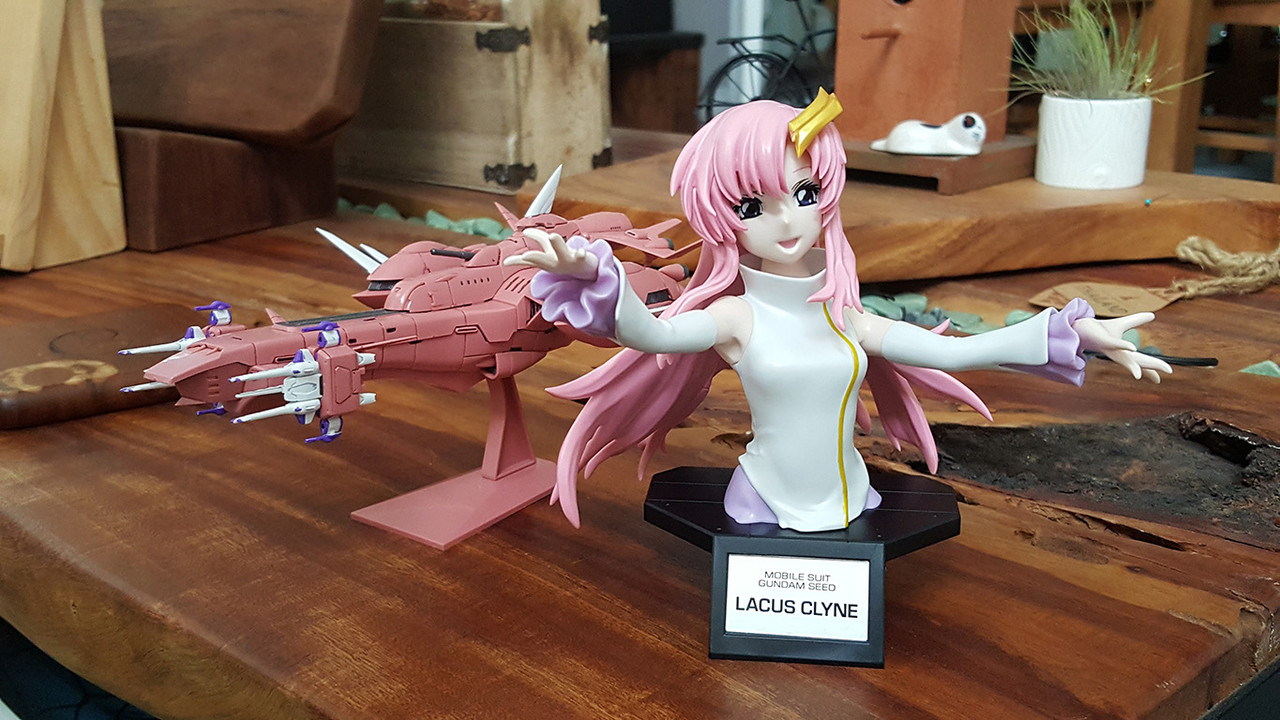 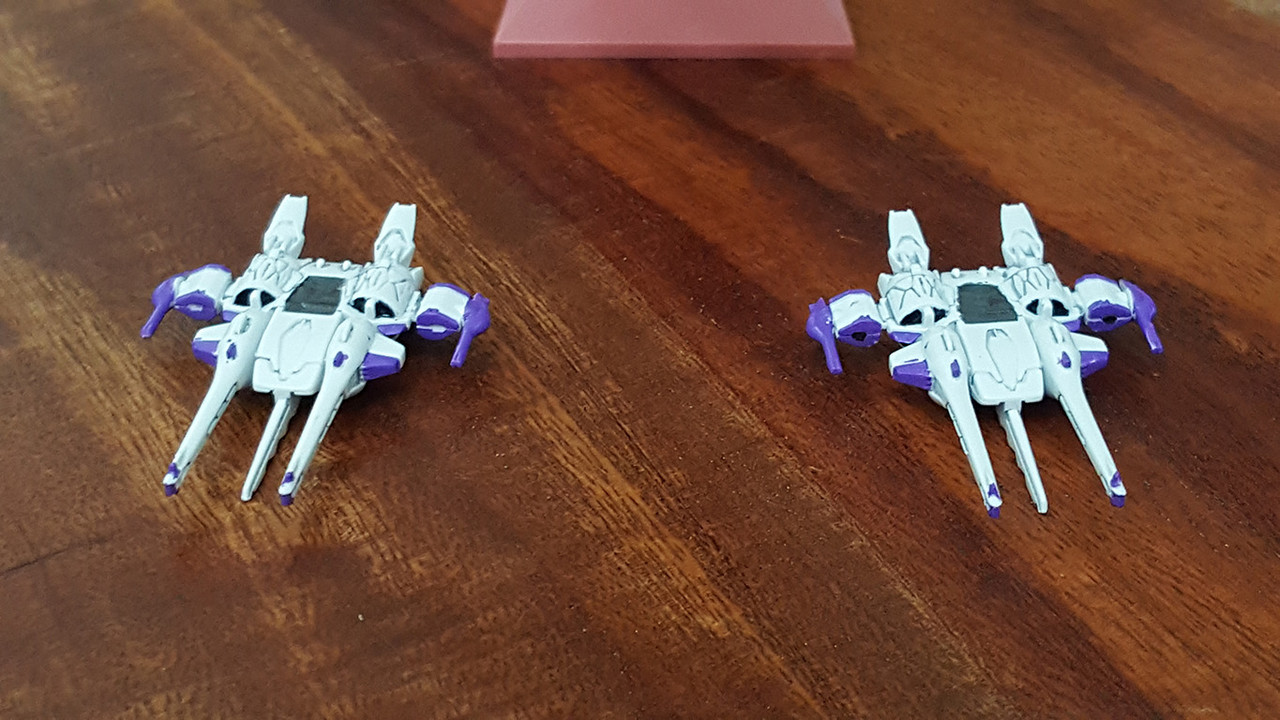 The tiny METEOR models took me the longest since my eyes kept glazing over from staring at such tiny parts for so long. 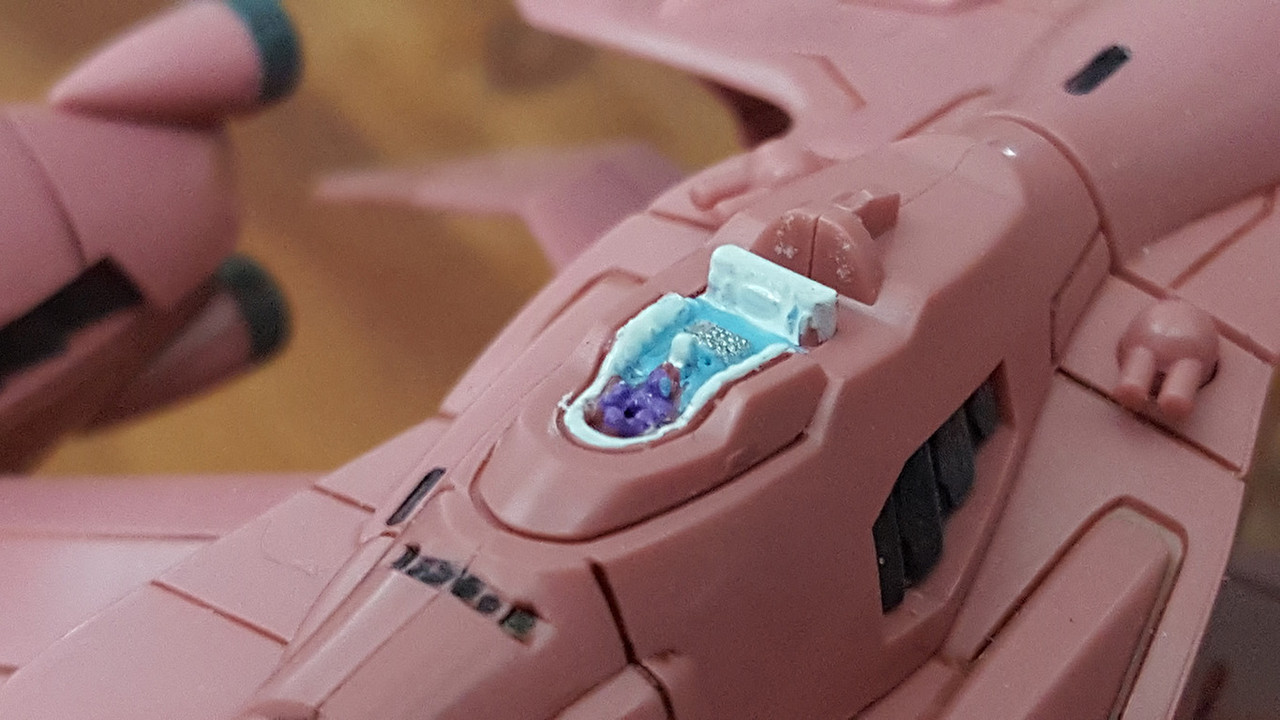 My paintwork on the bridge looks better in person, I swear. 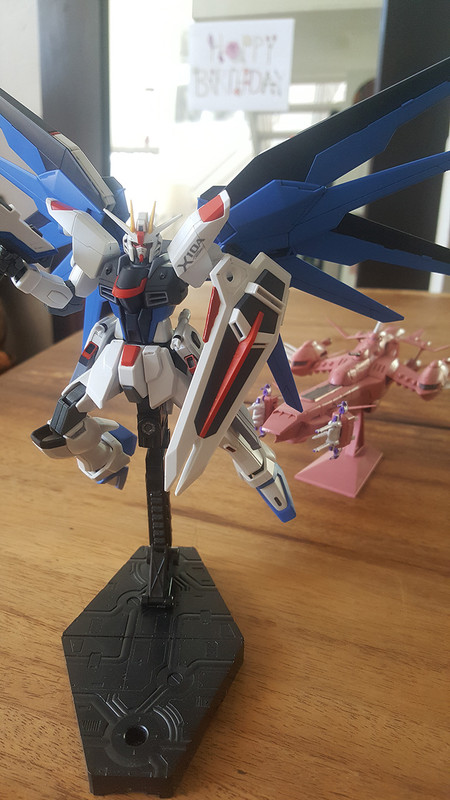 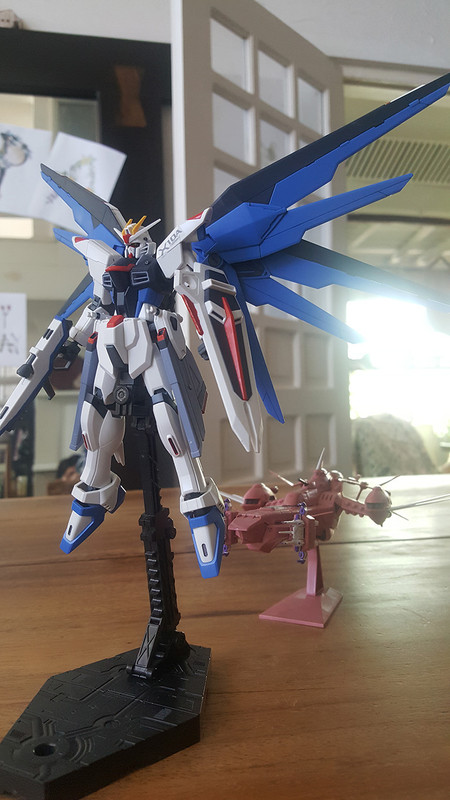 All that said, I'm a bit tempted now to get the Archangel too, just to complete the Three Ships Alliance.

I just don't feel like I'm up to working on such a sheer number of tiny parts that I need to paint again - that, and there's no Kusanagi model.

Not sure if we've addressed it yet, but the next wave of Gundam Universe is up for preorder.  Only two figures this time around, possibly owing to the extra parts they seem to have.

Tallgeese.  The first villain figure in the line, and beating a Zaku for the first time in ever.  Again, seems like the result of the line's western focus.  No beam saber, unfortunately.

God Gundam.  This has a bunch (relative to other figures in this line) of extra parts to recreate the God fingers and hyper mode.  Might be the reason we're only getting two figures this wave.

I'm not too familiar with the original designs for both of those, but it kind of looks like they decided to scrap the stylized look they tried going for with the first few waves. 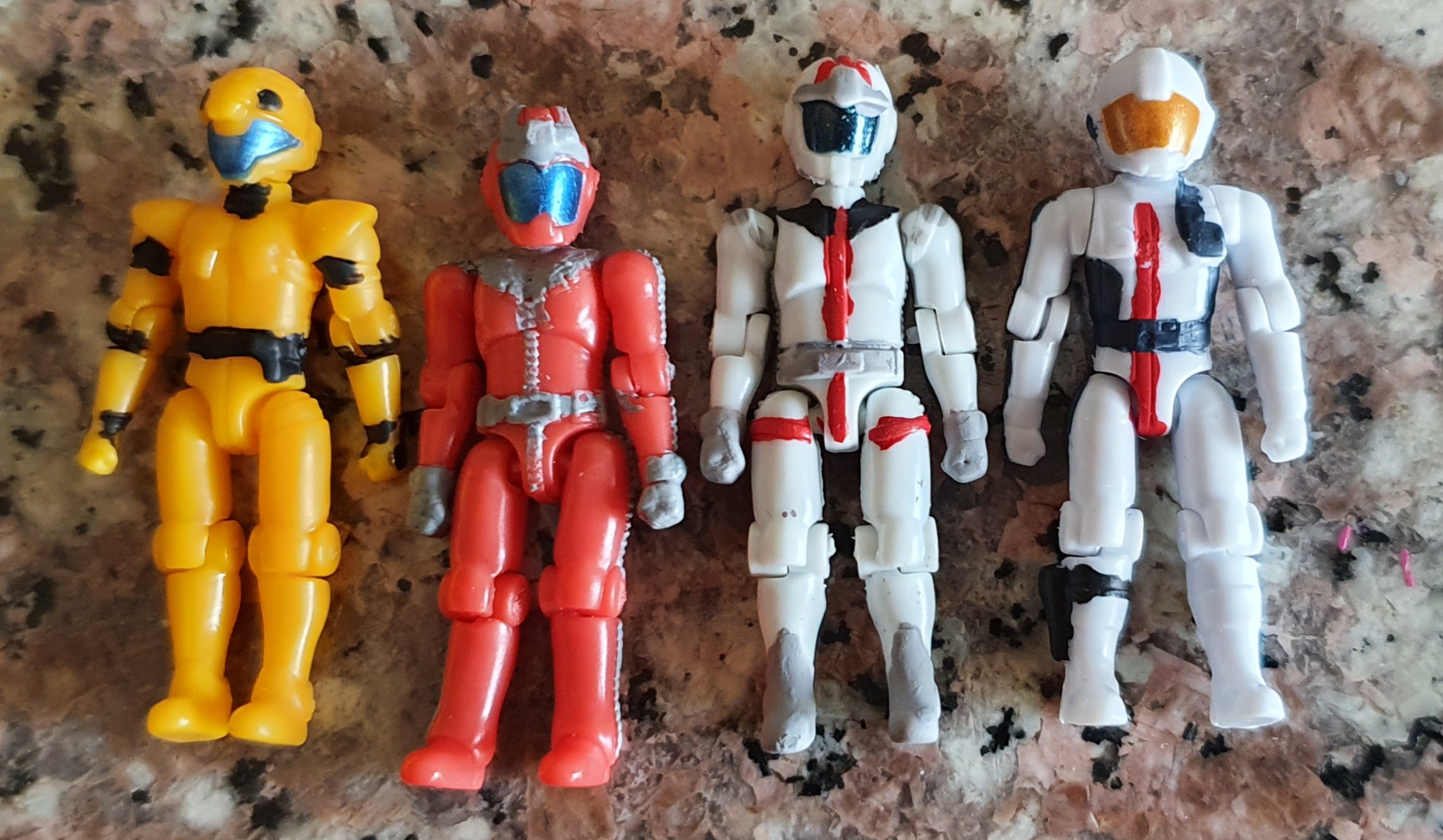 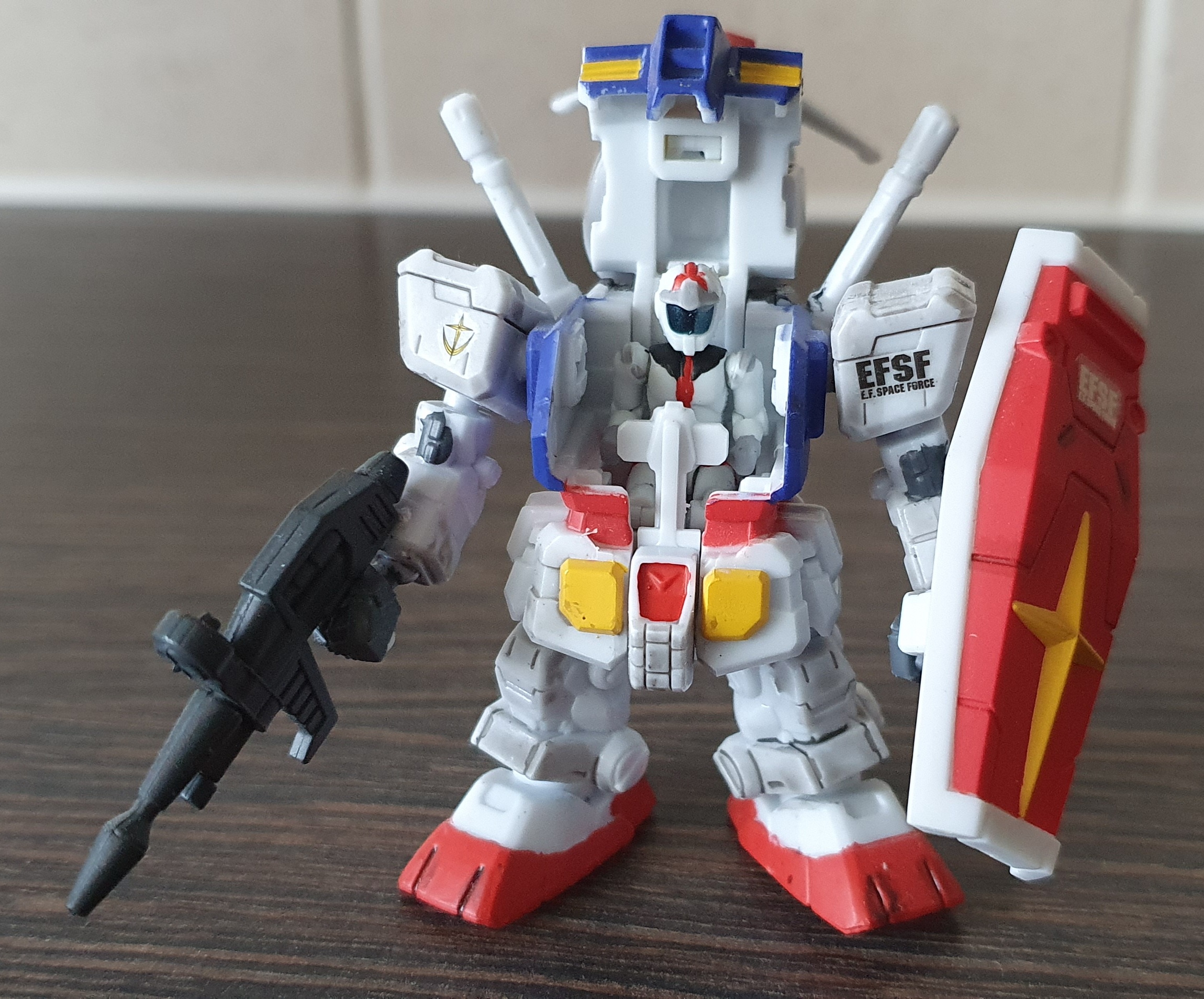 Took a look at Universe wave 4. The Tallgeese especially says they aren't dumping the aesthetic but I do think they're stumbling in response to feedback, which all seems to say "Ok, these look cool but they can't pose for shit." It feels like a massive mistake for a line they keep crowing is aimed at American/global fans. If something is sold as an action figure, people want to pose it. Looking at PVs and the like, Bandai seemed to think the market wanted Gundams that could just stand static in a cabinet. There's somewhat a market for that outside of Japan but usually people buy a figure to pose it in a unique way. It tells you a lot that my Barbatos is currently flailing to escape the claws of Siege Omega Supreme.

I think that's also why we're seeing only 2 figures this wave. Bandai do this a lot with lines as they respond to feedback a few waves in, scale back what they had in storage as they try to address the criticism.

So you know how I said Hobby Lobby is now carrying Gunpla?  They finally stocked and the prices are pretty much where I expected.  Something I forgot, though, was that they had a slot for the Leo.  $12.99, plus the usual 40% off coupon plus tax resulted in...$8.42.  Ooooh, that's army building prices right there.  If only the weapon pack wasn't so damned expensive...

Back then, I was one of those people who were indifferent to SD. Thinking about it, that might have been because 1) I didn't have as many basic modeling skills down pat yet, and 2) SD kits tended to require more work due to less color-accurate plastic separation (despite technically being for beginners, but I digress). Now look at me: planning out a classic-style JRPG party made up of releases that use the Legend BB build. 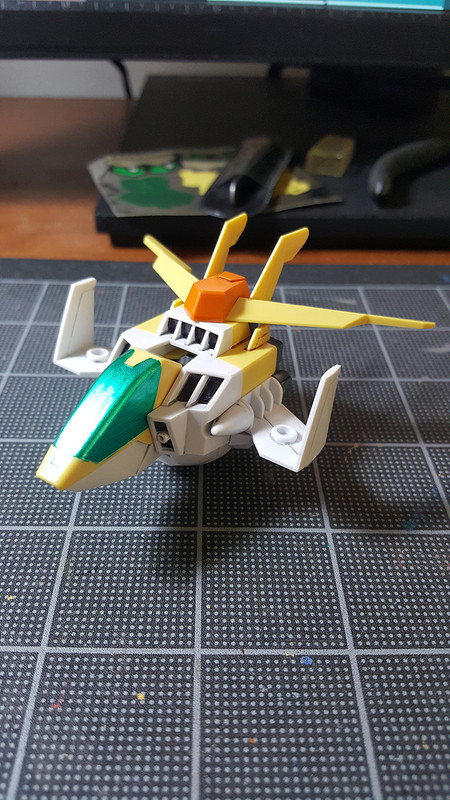 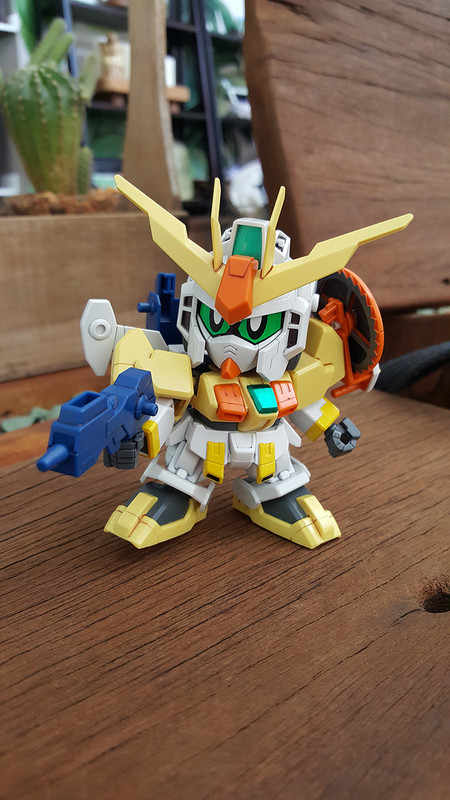 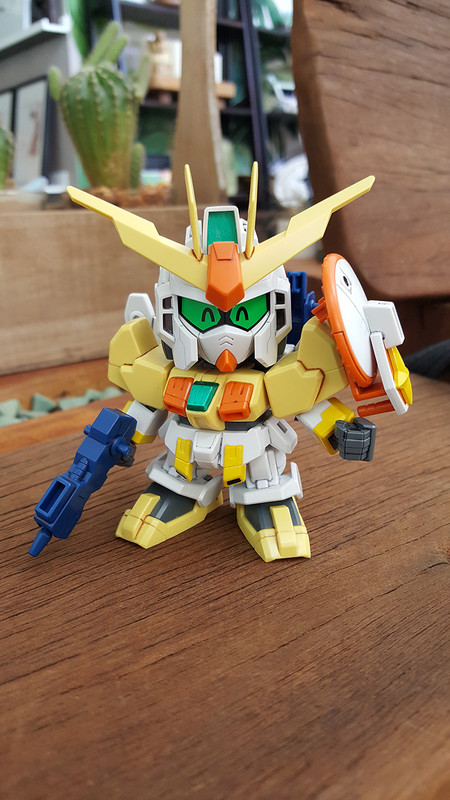 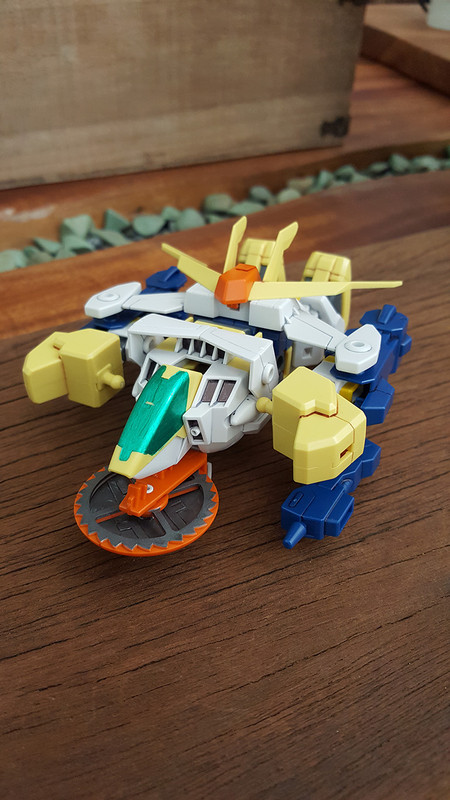 My only real complaint with the Winning here is that the cockpit ends up hitting a support strut in the back of the head when folded down for robot mode, resulting in that visible gash in the metallic green.

Also, only now did I notice that there's a tab on the cannon attachments that fit right into the slots on the arms for that mode - I've been forcing the whole arm into the hollow cavity of said cannon attachment this whole time.

Since I am stuck home, I decided to watch the UC Gundam stuff in chronological order.  I had seen a lot of this before, but some things were new.

This all started cause I was watch Gundam the Origin.  Really did enjoy this, and they did a good job of having everyone act as they should.  Poor Sayla especially got to be on an upgraded trauma conga line this time.

MSG:  Seen this and actually didn't drag as much as I remembered.  There some awful episodes here, and the animation is some parts is just horrendous, but the characters do help carry it and it makes a good start to the franchise.

08th MS Team:  Always did like this one, helps that it also has one of the best duels in the franchise.

Igloo: Okay a bit all over the OYW, but decided to watch it here.   First time I ever seen these episodes. It does look dated now, especially some of the earlier episodes, and ends up being one of the bleaker entries.  Okay to watch once, but it really didn't do much for me.

Thunderbolt, December Sky:  This was another new one for me.  I wasn't really wild about it.  Most of the mech designs didn't do it for me, and I really just ended up disliking almost of the characters, which may have not been helped that I found a lot of the character designs ugly too.  Seeing the Psycommu Test Zaku at the end was neat at least I guess.

0080 War in the Pocket:  First Gundam show I ever got to watch, and is a great palate cleanser.  One of my favorites, with a great story, some really nice redesigned versions fo the MS's, and a perfect length.

Thunderbolt, Bandit Flower:  New, just like the first one.  This one was a little better then December Sky, and Io was a little more tolerable.  The new New Type ability revealed in it does seem really overpowered.  Left on a cling hanger till the final part gets made.

0083 Stardust Memory:  This has always been the great looking mech, wonky story show, but after Thunderbolt, I am more then willing to give it a better shake.  Only on episode 3 now, so got 11 more to go.

After that I continue watching the shows which I have managed to see before until I get to Victory, since Narrative does not have a home release yet.

This is interesting. I assumed the shirt was a meta joke about the current pandemic. Either way seems someone caught on and they changed it. 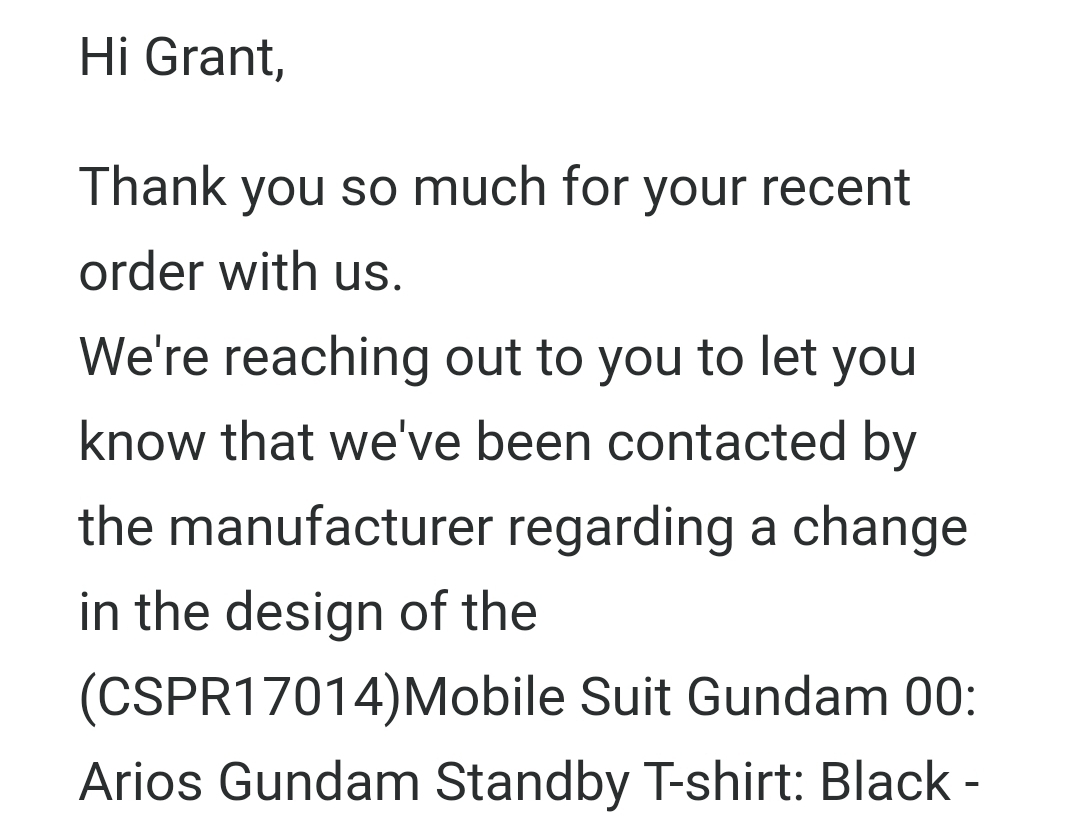 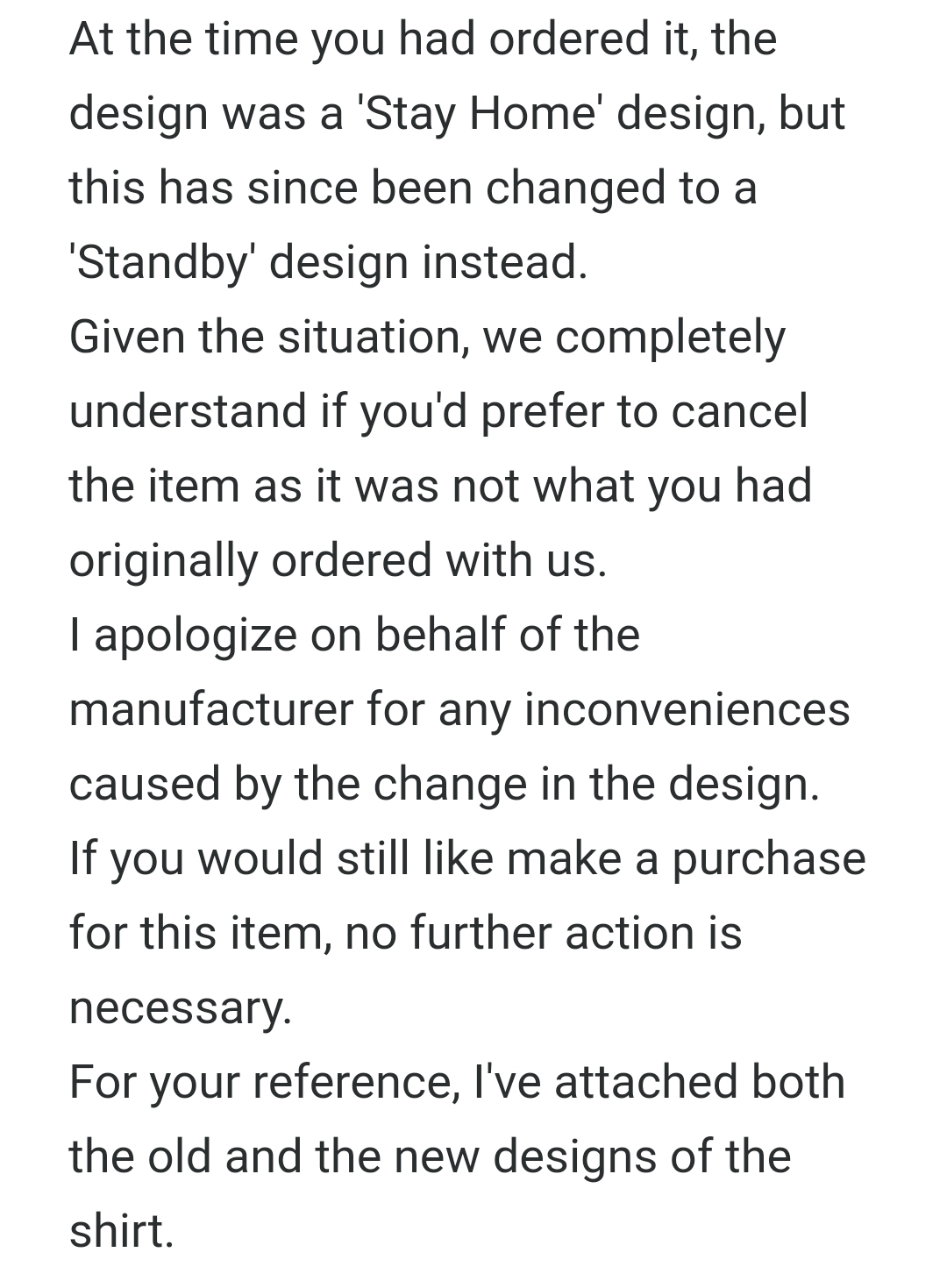 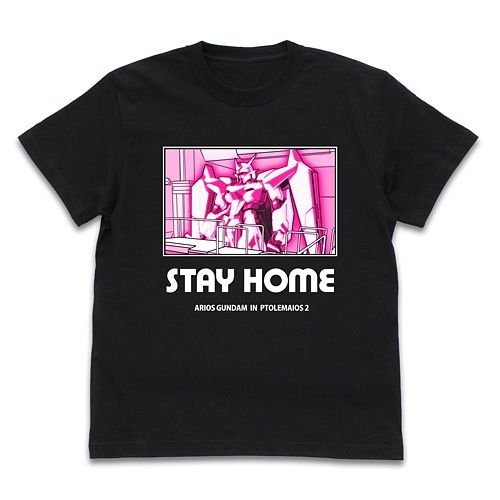 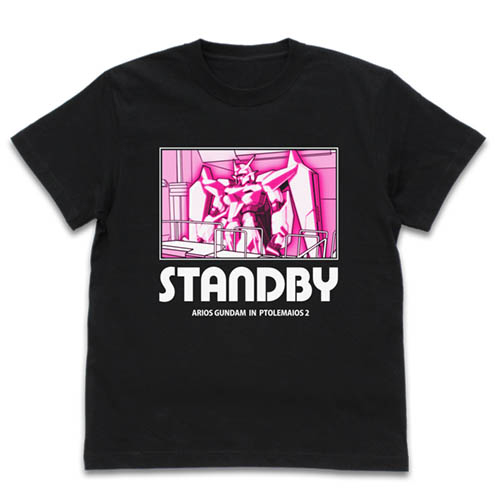 Have they ever done this before - have the regular version and the Build series revamp both be P-Bandai?

I don't know, but as a fan of Gundam X, it pisses me off.  The Airmaster Burst, I can understand.  But the Daughtress?  That hurts.

Have they ever done this before - have the regular version and the Build series revamp both be P-Bandai?

When it's the only iteration in the 40 year old franchise to have its run cut short due to poor reception, you don't take the risk of mass retail

Also tagged with one or more of these keywords: Gundam, Anime, Gunpla