"The Dark Knight Rises" sounds more befitting the first movie in the series, but I'll give it a shot. I like the title, and frankly, I wasn't banking on Riddler. Not sure why, but everyone seemed to be certain it would be him.

Penguin has been ruled out before. I believe Catwoman has also... but who knows? Mr. Freeze and Poison Ivy are both unlikely. So, let's take a look at who that leaves.

Talia al Ghul. This would tie in with the first movie as well, you get a strong villain... and she also fullfills the love interest role that Rachel Dawes left void when the Joker offed her.

Black Mask. He's never been done outside of comics and animation before, he could work.

Hush. Not likely, but I feel he is possible.

Bane. More likely than Hush, and he could be interesting if done right.

Harley Quinn. They already said they won't re-cast the Joker. But if they had concrete Joker plans, they could always give them to Harley.

Those are the five. that immediately come to mind.

QUOTE
I like the title, and frankly, I wasn't banking on Riddler. Not sure why, but everyone seemed to be certain it would be him.
Because a realistic, well-done Riddler could have seriously tested Batman's intellect, and really played up the "World's Greatest Detective" angle of his character. That sort of thing seems right up Nolan's alley, much more than a superhero romp.

Hugo Strange seems like he'd be an appropriate fit in that same vein, so that would be okay.

But I'd prefer not to see Penguin, Harley, Poison Ivy, Bane, or really anyone so obvious. A well-done Robin could be good, but Nolan has previously said he'd had no interest in going there.

Whatever they end up doing, I'm sure it'll be awesome. And will probably be Leonardo DiCaprio. Mark it down - you heard it here first.

ALERT: Everything is fine. 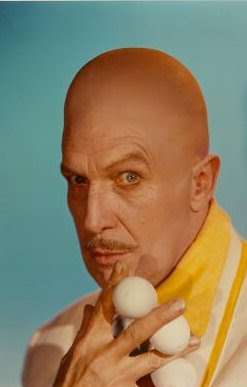 Only if Bill Hader plays him.
Man does a hell of a Price impression.

You're far too young to be this bitter and angry at the world....

I'm reading that with Roy's voice. Heck, I read everything you post in a laconic Irish accent.

I like Paul Dini's comment on the title: "The Dark Knight Rises. If the villain does turn out to be Catwoman, I can hear the snickering already."

I hope Scarecrow pops up again. He and Bats have never had a proper face off.

I've seen enough of him, personally.

Nolan's definitely painting him as the thorn in Batman's side- which is good. Killing off Ra's and Two-Face closed the book on them a little too completely.

Now, Nolan said specifically that the villain would not be the Riddler. This doesn't necessarily preclude the Riddler from being in the movie, given A) some of the promo material we've seen has been Riddler themed and B) Nygma has spent a long time recently in the comics as a legitimate detective, which would provide a really great angle on the story: two of the world's greatest forensic minds square off against whatever threat the main antagonist of the movie poses. Maybe Nolan's Riddler will be intent on exposing the Batman, which would be a really fun story.

Thanks to some meddling in my perceptions by a certain Canadian fellow staffer, my money's on the recently cast Tom Hardy playing Tommy Elliott/Hush. But for the story to work like it did in the comics, it'd require Jason Todd.

I like the idea of Harley taking up with the Joker left off. I doubt she'd be the only antagonist, but I'd love to watch her on the big screen.

And another scuff with the Scarecrow would be neat. We'll see.

Two-Face should return. Yeah, I saw Dark Knight and ther ending , but is he really dead? I doubt it.

Nothing is stopping Edward Nigma from being in the movie.

He could be a forensic detective that ends up going mad at the end of the movie as he's trying to track down the same villain that Batman is tracking down.

QUOTE(fangwing @ Oct 27 2010, 04:36 PM) <{POST_SNAPBACK}>
Thanks to some meddling in my perceptions by a certain Canadian fellow staffer, my money's on the recently cast Tom Hardy playing Tommy Elliott/Hush. But for the story to work like it did in the comics, it'd require Jason Todd.

Couldn't Rachael be an acceptable substitute in this case?

I say Harley should be played by Milla Jovovich.

I burned out my eyes, I cut off my tounge.

As I've said before, Catwoman pretty much needs to show up in some form to resolve the in-joke foreshadowing from TDK (about the bat-suit being effective against cats). Dramatically, you just don't leave a perfect setup like that hanging. Plus, what with the copybats seen in TDK, a cat-themed catburglar makes logical sense as a progression. She'd also work as the romantic/UST lead.

And whatever Nolan says, I still think the Penguin would work as Gotham's newest Mob Boss --one who Batman and Gordon both know is dirty, but they can't make anything stick because he owns all the (surviving) lawyers. (Cue the irony; if Harvey was still around, he'd be able to put Penguin away: ergo, the Penguin's continuing reign is Batman's fault.)

As for the Riddler, we've never really seen Nolanverse Batman working as a detective --the bullet scene in TDK was him letting the computer do his work for him. If the arc of the Nolan trilogy is Bruce becoming the Batman we know and love, he needs to go up against an intellectual enemy, one who can force him to hone his own detective skills (as Scarecrow/Ra's al Ghul helped hone his psychological theatricality and Joker honed his relentlessness). Yes, make Nygma a hired investigator, out to unmask the Batman --Riddler has never really worked as a flat-out criminal; he's better when he's attacking Batman specifically.

Only drawback is that none of these are really a physical match for the all-important climactic set-piece battle. They'd need some hired muscle. Perhaps a professional assassin brought in by Nygma (or by Penguin to follow Nygma). Bane would be the obvious one, but reducing him to the dumb muscle kinda undermines what makes him a great character. Maybe Deadshot. . .

And yeah, I'm working under the assumption that this will be Nolan's last bat-movie. I just hope whoever follows him keeps the "Nolanverse" sensibility and doesn't try to reboot. This is the first filmic approach to Gotham city that has ever really grabbed me. Not as grimdark as the Keaton era, no giant statues, no over-the-top neon. . .

(That said, I am a fan of what Harold Ramis calls "the Domino approach" to reality: start with something perfectly realistic, then change one single [plausible] detail, then change another, then another, until you have a giant anthropomorphic marshmallow stomping through midtown and the audience still thinks it makes perfect sense. If Nolan wants to take a tiny little step toward cryo-based weaponry or biological reactions in silicate, or genetic research introducing chlorophyll into animal cells, then I certainly won't stop him.)

I burned out my eyes, I cut off my tounge.

I'd like to see Mr. Zsasz. He would fit in perfectly.

Ooh. I like the idea Riddler as sort of a rival. Antagonistic in that he's trying to unmask Batman, but not a villain... Maybe also going after the Bad Guy(s).

Nothing is stopping Edward Nigma from being in the movie.

He could be a forensic detective that ends up going mad at the end of the movie as he's trying to track down the same villain that Batman is tracking down.