51 replies to this topic

Nope, judging by this, it was unedited copies that they had:

There are also these:

I've previously done some research on those early Captain America and Spider-Man PSAs, and found the following links:

It's not 100% definitive, but the above links suggest that the Cap PSA was first, in October 1980; supporting this date, the Captain America and the Campbell Kids tie-in comic is also listed with an October 1980 publication date on the US Copyright Office database. According to the second link, the Spider-Man PSAs were apparently launched two months later in December 1980.

Storyboards for the Cap PSA (saved from an eBay auction in 2016):

Regarding the Spider-Man PSAs, even without the 1980 copyright date at the end, it's clear these were produced before the syndicated Spider-Man series was, since they don't use any of Johnny Douglas's music, and, more tellingly, the web-shooter sound is taken from 1979's Spider-Woman as opposed to being the sound effect created for the two 80s series.

That was Amazing Friends' producer/writer Dennis Marks, who really took a liking to the character.

I've seen references to this in development from Marvel Productions several times before. Of all the unproduced Marvel Productions concepts, I still think the lack of a Secret Wars series was Marvel Productions' single biggest missed opportunity to follow the company's original remit of promoting actual Marvel Comics characters.

It's apparent that, after Spider-Man and the Hulk, the networks weren't interested in any of Marvel's self-owned super-hero properties, and Marvel probably determined there wasn't the same kind of money in syndication without a cash influx from other companies such as Hasbro.

Getting Mattel on board to fund a syndicated Secret Wars series should have been a strategy that worked, but Mattel likely passed on the opportunity as they ultimately didn't actually own any of the featured characters outright.

1986:
-YOUNG ASTRONAUTS (This actually got made, BUT it got shelved due to Challenger tragedy - albeit it's said that first episode was aired two days prior. Occasionally animation cels from it show up at auctions)

Yes, this has come up before. Toei's old website listed them as having completed one episode. Even before Challenger, there were also ongoing problems in the relationship between Marvel Productions, The Young Astronaut Council and CBS that resulted in the series being postponed from its intended September 1985 start date:

I would expect that someone involved with the production had a copy of the first episode at some point. Hopefully we'll get to see it someday.

On a side note, two cels from Young Astronauts: 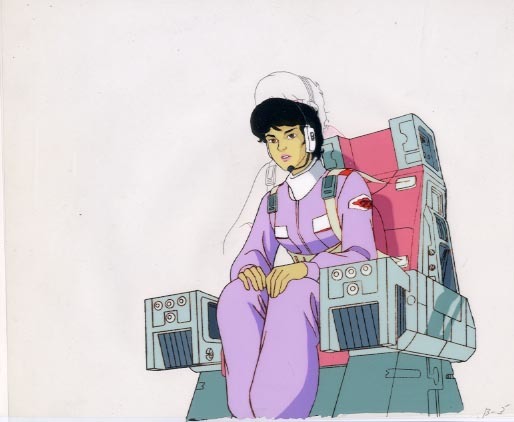 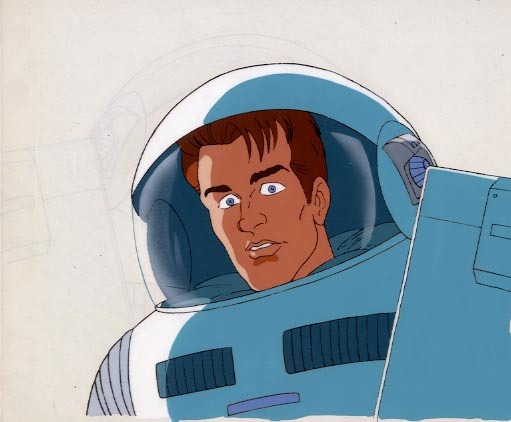 I saw a link on another forum, so I went and copied the text for a bit of psuedo-reproduction.  I've put up the unused TF season 3 premise from Cary Bates and Greg Weisman "The Eye Of The Beholder".  I've placed it where the date indicates a script roughly would have gone, if any of their premises had been picked up. Which is likely between Chaos and Dark Awakening.

More repro work, this time from the transcript of the TF show bible.  I've separated out the 9 page correspondence that was part of those postings.  Among other things, it does show that Divide and Conquer was ready to go as a premise weeks ahead of being commissioned.  You can also see how the building blocks for The Ultimate Doom were beginning to take shape. 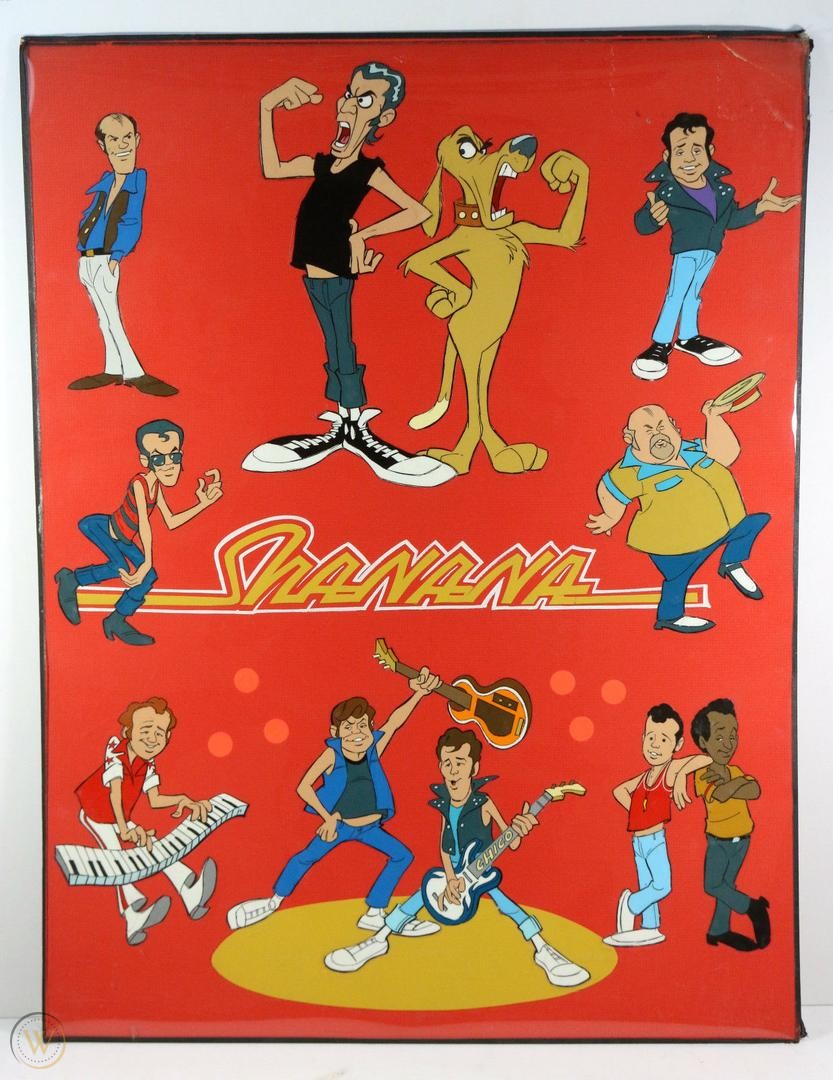 I saw a link on another forum, so I went and copied the text for a bit of psuedo-reproduction.  I've put up the unused TF season 3 premise from Cary Bates and Greg Weisman "The Eye Of The Beholder".  I've placed it where the date indicates a script roughly would have gone, if any of their premises had been picked up. Which is likely between Chaos and Dark Awakening.

Something's wrong with the links. I get this message:
"Your current accoun does not have access to view this page.
Click here to logout and change accounts."

Done some housekeeping that should fix up the links, also added a links columns for each show to make browsing easier.

One potential source of info I'll be keeping my eye on in 10 days is Cybfest NW.  Their big deal this year is getting David Kaye, but there is also.....

You have my undivided attention, yeeesssss

Now I have some time off to work with, I've gotten started on the advert section of the production timeline.  In doing so, I'm getting closer to pinning down the transition from Marvel Productions to TMS for producing adverts for the remaining toylnes.

Thanks to TMS' practice of using the date of commission for their production codes, they started in on TF and GI Joe adverts in October 1987.  Marvel would continue to do their remaining advert commissions until at least November.  Of course, come 1988 when it was time to start on the ads for 1989, it was 100% TMS.

There are various model cels around online, but the low picture quality means I can't read most of the description boxes.  However having seen Visionaries model sheets, I can confirm that these are an assortment of both Marvel and TMS: https://www.yojoe.co...bowmodel3.shtml

The only Transformers TMS' model cel from the transition period is the Powermaster Prime one that turned up a few years back. 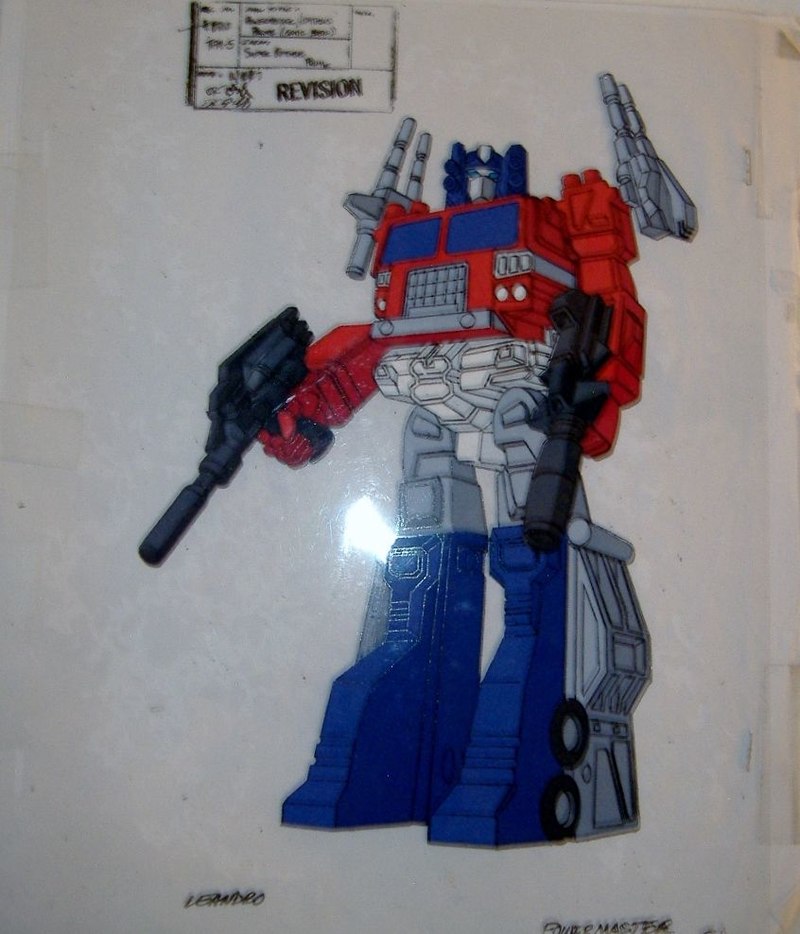 With the DVD dropping through my letterbox today, I've added 7 scripts for Bucky O'Hare as it was the fourth, and it seems final, show in the Sunbow library to get the full Metrodome treatment.  Also managed to add a sizeable model pack from an old fan site to the mix.

In case you're wondering:  Yes, Christy's scripts are on the DVD and no, I will not be uploading them as she has explicitly forbidden the posting of her scripts online.  Honestly surprised they were on the DVD in the first place.

As I had to subscribe to Adobe Pro and reduce the file sizes to get them under 100mb, I did the same for the GI Joe movie, so hopefully that should work in preview mode.

Done some housekeeping that should fix up the links, also added a links columns for each show to make browsing easier.

One potential source of info I'll be keeping my eye on in 10 days is Cybfest NW.  Their big deal this year is getting David Kaye, but there is also.....

You have my undivided attention, yeeesssss

Will there be a recording of the panel?

Turns out it was just the existing material from one publicly-available Google Drive or the other.  Nice to see them all printed and in proper script format, but nothing revelatory

Thanks to walruslaw for providing a copy of the TF show bible from the Shout Factory DVD.

Now that the site is two months old, it is interesting to see which sections are the most popular (I have the gadget up on the blog).  Out of the ten shows represented, the Top 3 is:

Transformers comes under "well duh".  D&D is not surprising because the DVD contained so much material from the run, plus I've been promoting it on the main FB fan group.

Visionaries has turned out to be the big sleeper hit, surpassing even the TF Season 3 section. 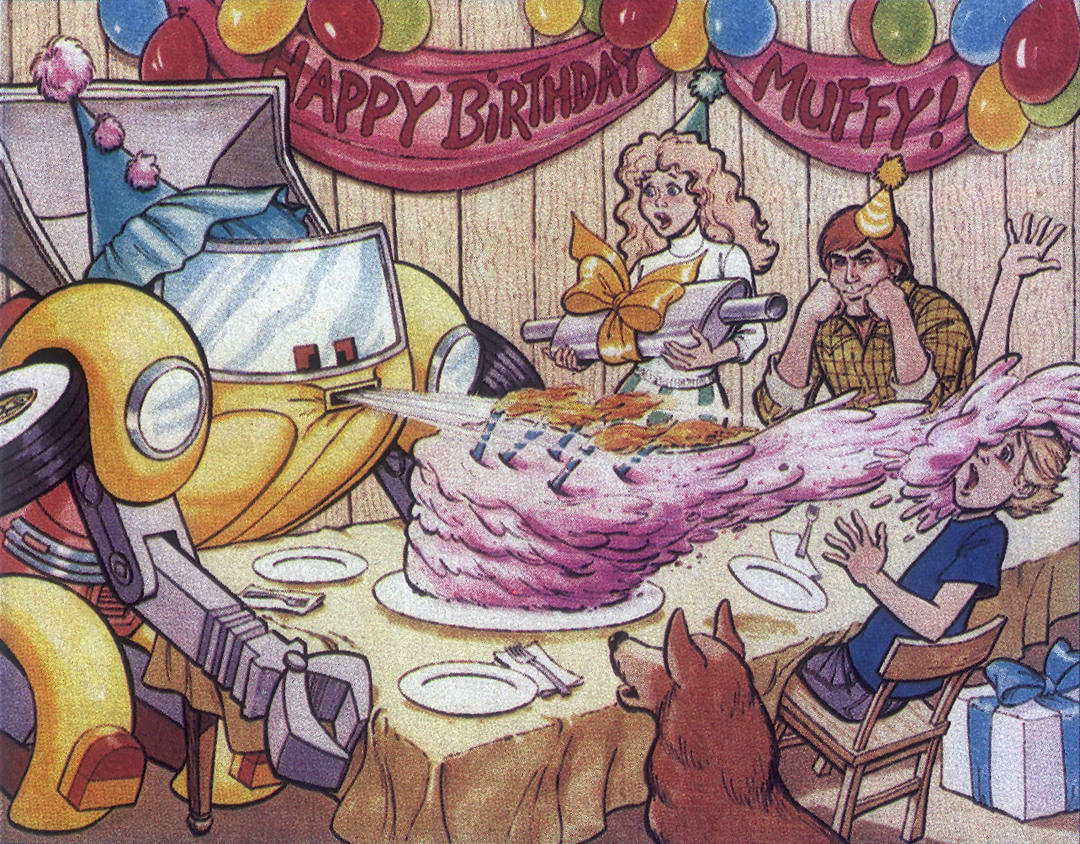 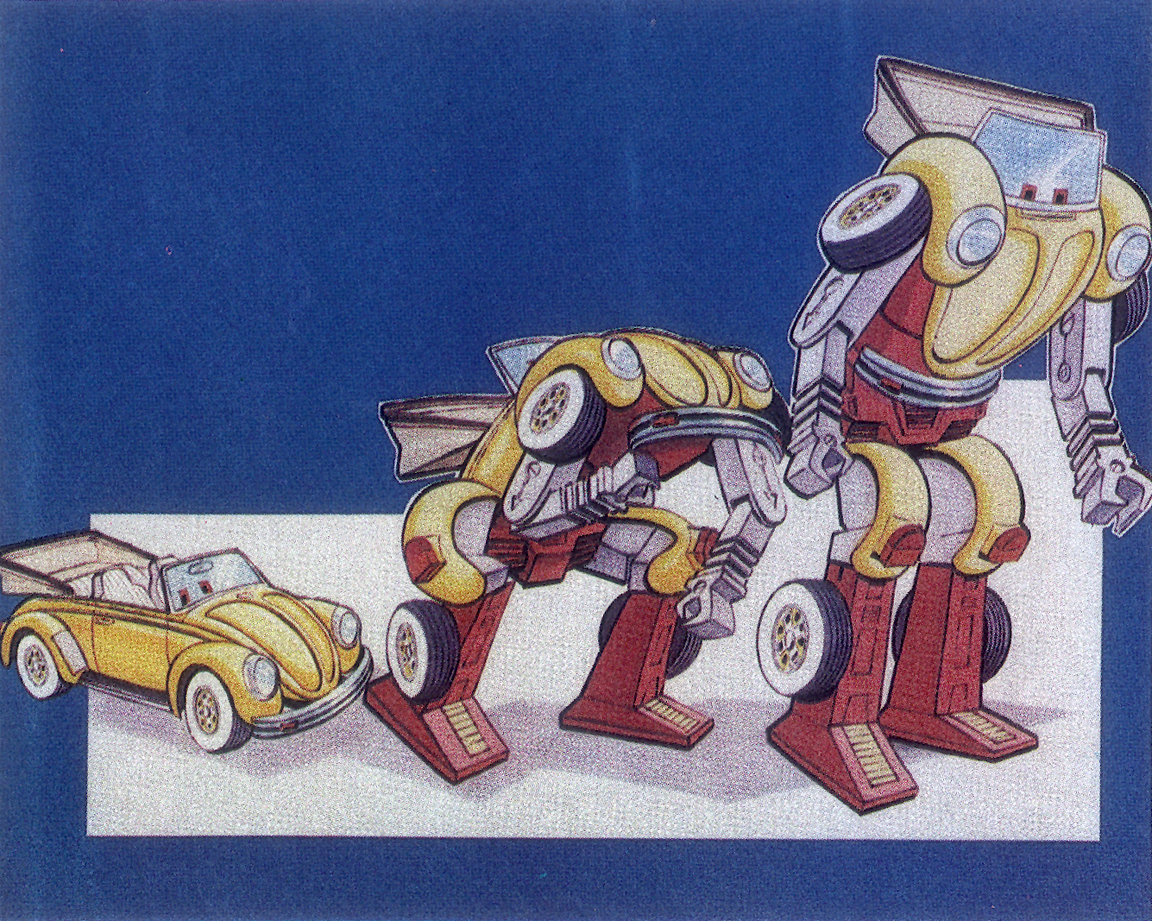 A photo that Flint Dille posted in 2012 of the Sunbow West crew back in the day:

Not pictured: Buzz Dixon taking the shot and Roger Slifer in New York

It was going to be a series called "Car and Cable", with a transforming robot called Muffy, and yes he really does look an awful lot like Bug-Bite. Maybe someone else had their eye on using Machine Robo toys at some point prior to Tonka?

The image probably comes from Comics Feature #33, which had a cover story on Marvel Productions. One of the other images in the same feature is an early piece of Transformers concept artwork featuring a (Diaclone-inspired?) pilot inside Optimus Prime, and what looks like a green Bumblebee behind him.

Perhaps coincidentally, both the green Bumblebee and Muffy were rendered as VW beetle convertibles.

Got the first script contribution up at the archive:  The unedited original version of War Of The Dinobots, including the deleted character of Dr Lynn Hiyashi.  Also a chance to compare Don Glut's idea of the Dinobots to Ron Friedman's.  Or, as Don himself wrote "Us primitives are not stupid!"

Character's called Muffy. The show was apparently titled "Car and Cable". Apart from that, nothing is known about it.

OK, so on the subject of failed projects, this popped up on ebay

As you may have seen in the main TF forum, got a big catch this month:  Both the full unedited script and full storyboards for Cosmic Rust are now up at the archive.

I have also started on a restoration project for the Bucky O'Hare scripts.  As the scans that Sunbow did back then were so poor that it drove the individual file size up to 100mb.  The following is from Rick Merwin's episode The Search For Bruce:

Published a new part to the archive.  A spreadsheet listing the full estimated runtime of an episode based on script page count.  Also currently working through the broadcast episodes, finding the time indexes to verify the runtime of original story animation.  What I mean by that is not including intros, credits, bumpers or in the case of 1986 shows, repeated footage.  Recaps are only included if they are accounted for in the scripting.