18 replies to this topic

I summon me in attack position

Yeah was everyone hoping this thing was gonna be good?  Well let's get the good out of the way.

The “Cowboy Bebop” live-action series at Netflix has found the lion’s share of its main cast, Variety has learned.

John Cho, Mustafa Shakir, Daniella Pineda, and Alex Hassell have all been cast in lead roles in the series, which is based on the anime series of the same name.

Cho will star as Spike Spiegel, described as an impossibly cool bounty hunter with a deadly smile, a wry wit, and style to spare. He travels the solar system with his ex-cop partner, Jet, pursuing the future’s most dangerous bounties with a combination of charm, charisma — and deadly Jeet Kune Do.

Cho is known for his roles in the rebooted “Star Trek” film franchise as well as the “Harold and Kumar” films. He will also appear in an upcoming episode of the “Twilight Zone” reboot at CBS All Access. He is repped by UTA, 3 Arts Entertainment, and Morris Yorn.

Shakir will play Jet Black, one of the few honest cops in the solar system before an ultimate betrayal robbed him of all that he loved, forcing him into a vagabond life of hunting bounties to put food on the table. Jet is an inveterate jazz enthusiast and Captain of the Bebop.

Shakir recently starred in Season 2 of the Marvel-Netflixseries “Luke Cage” as well as the HBO series “The Deuce.” He is repped by Gersh, Robyn Bluestone Management, and Schreck Rose.

Pineda will play Faye Valentine, described as a bold, brash and unpredictable bounty hunter. Suffering from amnesia after years of being cryogenically frozen, Faye does whatever it takes to survive. Whether she’s lying, stealing, or just being a thorn in Spike and Jet’s side.

Ok that's a good cast list.  I've got hope for this aaaaaaaaaaaaaaand all hope is gone.

Netflix’s live-action adaptation of “Cowboy Bebop” has fans buzzing with anticipation. The iconic anime, named for the genre-busting style of jazz that comprises the lion’s share of its soundtrack, is considered a cult classic. Netflix is pulling no punches on the production, and casting thus far has proven worthy of the hype: John Cho has been chosen to play the show’s devastatingly cool protagonist, Spike.

But John wont be alone on screen, as Netflix has just announced a film and TV newcomer will appear alongside him.

Bella, the 2 year old Siberian husky, will round off the predominately human–and entirely motley–crew of bountyhunters as the “datadog” Ein.

Sources say that Netflix has decided to make an “Artistic choice” in casting Bella, citing her “intense and intelligent screen presence, befitting a gentically engineered ‘datadog'” as their rationale.

While Ein is drawn as a Welsch Corgi in the cartoon version of “Bebop”, the reasoning behind his original design was based solely on a member of Bebop creative team’s love for the breed.

“Nothing in the story says Ein has to be a Corgi,” a spokesperson for the netflix project explained. “…and honestly, a reboot that precisely mimics the source material is boring. We’ve already seen that story.”

When asked about concerns related to fan backlash, Netflix’s spokesperson replied with “Just like the genre the show is named for, sometimes it’s better to do what’s unexpected, what’s never been done before. (sic) This is the ethos of Bebop, and we’re being true to that. We’re confident true fans of the show will embrace this choice.”

“Cowboy Bebop” is expected to air sometime next year on Netflix.

A hugging husky?  A HUGGING HUSKY!?  WHY?  BECAUSE YOU DON'T WANT TO REPEAT THE ANIME!?  REALLY!?

Their attitude towards the Husky decision is a little off putting, but everything else seems good.

Though I don't know how one could compare to the anime. It's so good.

Or, you know, it's bullshit. There's no sources other than this single random blog and a reverse image search for "Bella" gets you Tumblr hits from early 2018.

I normally don't like going there, but isn't Spike Spiegel supposed to be Jewish?  I'd think someone more along the lines of Andrew Garfield would be better for the role.

Nothing in the story says Ein has to be a Corgi.

Other than he was written as a Corgi

Also because hug you. There are just some things you don't change.

"and honestly, a reboot that precisely mimics the source material is boring. We’ve already seen that story."

Yeah ask the team that did the Death Note adaptation how that thought process worked out for them.

If changing a corgi to a husky is what makes repeating the anime not boring, why are we even doing this thing? THAT close to boring is okay?

This year is gonna rock

No cute corgi hoped on mushrooms??..  And Im out

I normally don't like going there, but isn't Spike Spiegel supposed to be Jewish?  I'd think someone more along the lines of Andrew Garfield would be better for the role.

I don't think he's ever been officially stated to be such.  Just inferences fans have made over his appearance, and other small details that roughly line up.

It's all part of the cultural hodge-podge that makes up the CB setting.  About the only truly defined part of the series' cultural melting pot is that the Chinese seem to have become humanity's leading economic power  (IIRC, North America took the brunt of the damage in the Gate Incident?), with a Hong Kong analog serving as the closest thing the series has to a main hub city.  And that's mostly because the series owes a lot of its imagery and style to Hong Kong gangster movies.  Even then, the mobs in CB aren't nearly so ethnically homogeneous as the films that inspired them.  Lots of vaguely European and even some Americanisms abound within the Triad and their associates.

"Faye" seems to be Singaporean according to Speak Like a Child, although technically, that's only where she hailed from, and doesn't confirm her ancestry.  Ed may be Turkish, given the roots of her family name.  But given as her family name translates to something of a joke, we maybe shouldn't take that seriously, either.

Another Year, Another Evolution of the Dark Knight!

If true, there 'reasoning' for the changes come across as kinda mean.

"Nothing says Ein has to be a Corgi." Yeah, other than he IS a Corgi! Soooo... sounds like the implication is they might totally change how they introduce Ein. Since, like Monique said, Ein is tiny so he can fit in a briefcase!

Also, the whole 'doing the same thing is boring'? THEN WHY ARE YOU BOTHERING! if telling the same story sounds boring, then why are you even adapting this, rather than doing something else.

The casting sounds fine otherwise, but this does not fill me with confidence.

I vote that they use a Pug-Husky mix.  Which can turn out two ways: 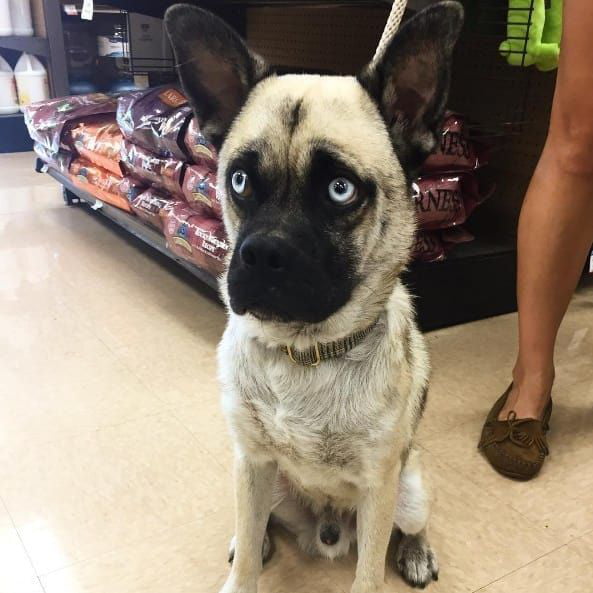 The real funny thing, Corgis are actually way more intelligent as dogs go then Huskies.  The excuse given for using a Husky just seems really silly.

More likely they couldn't find a trained Corgi to do the role well.

Another Year, Another Evolution of the Dark Knight!

Pugsky2: I will EAT YOUR SOUL!

I mean, changing the dog breed to be more ameniable to work with and selling the idea of a "Datadog" is fine. I could buy the idea that in "casting" for Ein the Husky just performed better and more believably than any Corgi they sought out.

But because they don't want to repeat the anime...they are aware Spike dies at the end of the anime, right? (Okay, we don't KNOW for sure but the implication is there.)

But because they don't want to repeat the anime...they are aware Spike dies at the end of the anime, right? (Okay, we don't KNOW for sure but the implication is there.)

i dont know if this should be a spoiler or not, but im gonna make it one anyway

Spoiler
at the end of the movie, did he still have those nanos in him? ive only seen it once and a bit fuzzy on details. same for faye. i know the movie came after the series, but since it wasnt shown spike actually died maybe he still has them

I feel like it's pointless to watch a live action version when the anime is so good.  Not interested.

So everyone here can stop bitching about "they changed something, its ruined forever!" yes? Wait I forgot, this is the internet... resume chicken littling.

Oh, this is a thing which is happening.

Well I'm off to never think about this again.

This year is gonna rock

Its on the right track Im cool now