Who "Owns the Name" to you?


34 replies to this topic

it feels like it has been so ingrained into my skull that when someone says, for instance, starscream my brain just leaps to which one?

or i usually consider prowl II before prowl 2

Does anyone see City-Swimmer? Is he gliding beneath the silver water? Is he creeping 'round a corner, hugging a wall, silent as a shadow in the dark?

I mean, I like the G1 guy, but I can't help but think of Mr. "Turned to anti-matter by eldritch beings outside time and space."

He's got a Kirby Krackle!

Bonecrusher is a mine-clearing vehicle

Soundwave has no face

Rampage is a crab

Scourge is rivals with a shark

Galvatron is, er, the Decepticon Leader back from the dead

Dinobot is just one guy

Blades is a Rescue Bot

I guess roughly speaking, anything but the originals. A whole lot of exceptions, but still. It gets real annoying when they announce a name and I immediately get excited just to find out it's the one version I don't like at all, which is all the goddamn time.

Praise be to Stakeout.

I've got probably the weirdest one. Leadfoot is the PCC guy. 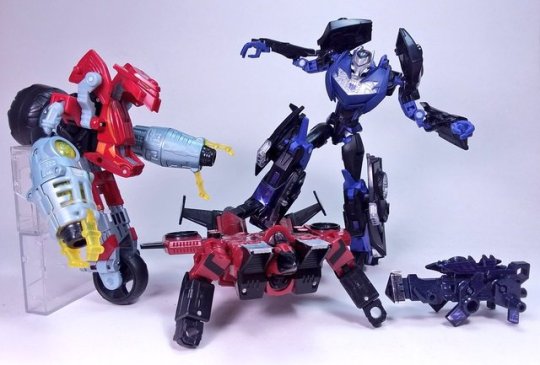 Later, G1 Thrust was found stuffed in a gym locker, the recipient of The Dreaded Rear Admiral.

You realize you've just raised the question of who owns the name "Vehicon."

My Shockwave is the one from DR. SMOOV's video

Does G1 Thrust though? I know his bio says stuff, but I can't think of a single thing G1 Thrust ever did of note, be it the show, Marvel Comics, or IDW.
So Armada Thrust certainly wins the character bit.

Problem is I just like G1 Thrust's design better. Armada Thrusts design is certainly unique, but it doesn't do anything for me. And I say that as someone that adores Armada.

Beast Machines Thrust is crying in the corner.

I've got probably the weirdest one. Leadfoot is the PCC guy.

Later, G1 Thrust was found stuffed in a gym locker, the recipient of The Dreaded Rear Admiral.

You realize you've just raised the question of who owns the name "Vehicon."

It's either Bombshell or Skywarp, right?

Usually it's the version I remember from G1 (or RiD, or the UT, etc), but often I've forgotten the G1 version (or they just made no impression on me), and I default to some more interesting version I've made up in my head.

"My" Ratchet is actually more like Batou from Ghost in the Shell, as a fusion of his "party guy" Budiansky bio from MTMTE, his more casual cartoon personality, and the more badass warrior-medic I recalled from the few glimpses I had of the Marvel comics --he knows how to be serious, but he's also the guy you'd want to crack a few energon-beers with at the end of the day.

I also make heavy use of renaming and repurposing to bring in other memorable versions.

The grumpy old animated Ratchet is Remedy, and the Jeffrey Combs version is Rest-Q the Gobot.

I've been calling him Hubcap; yellow guy who looks like Bumblebee, has a pathological need to be liked, and a communications expert who could figure out how to use radio transmissions to communicate.

Animated Bumblebee is Bumper, both because he's the "young, inexperienced" archetype, and because of his voice actor.

RiD2015 Bumblebee does match my (seasoned veteran, post-war) version of Bumblebee, so he gets to be "merged" with G1 Bumblebee and keep the name.

UT Hot Shot is Tigertrack, because Tigertrack is known for his visual sensors, and UT Hot Shot had a fancy visor.

("Hot Shot" is the veteran and pyrokinetic leader of the Spy Changers, simply because he was here first.)

I don't have that many examples where later characters overwrite the earlier uses of a name, but there are some.  Off the top of my head...

Inferno belongs to the Beast Wars one, seeing as that's the one with a personality.

Barricade is a police car Decepticon. I don't like any of Bay's movies, but I know a good concept when I see one.

A bunch of IDW versions take precedence of the properly G1 incarnations in my mind, but that would be a bit long and complex to go into here.

Scorponok is a bit of a weird case because I have no attachment to the Unicron trilogy character, but his design is absolutely the one I prefer and think of first (in G1 colors, though).

The doctor is in.

Scavenger is the Armada guy.

Really, combiner limbs don't have much personality so they're low priority on their own names.

Most of the time it's the original incarnation of the character.

Yeah, unless there's a case where it's a name that was applied to a character with no personality or fiction presence, I tend to think of the originals in 98% of the cases.  When I think "Blackout", I initially think the Movie guy, not the Micromaster.  But guys like Prowl, Ironhide, Starscream, or whomever else... it's always primarily the G1 incarnation.

Creator of all things Transformers

Blaster can find a new name for his lion, Steeljaw is a the big bad wolf now.

Scourge is always going to be the Cybertron character to me. RID 01 was my first Transformers series, but I just cant agree with that Scourge getting to own that name. I do like it for Evil Optimus Prime in the context of Grand Scourge, though in that case its because I imagine it more as a title than an actual name.

I wouldve said G1 Red Alert comes to mind before Armada/Cybertron/Animated, but after you described G1 Red Alert I realized I was thinking of First Aid instead, so I guess maybe I do think of that name as belonging to an ambulance.

As much as I love the Cybertron character, something about the name Ransack just says old-timey fighter plane to me.

Inferno is a weird name for a fire truck and it suits the Beast Wars character much better.