61 replies to this topic

I'm hoping for the same thing. If I remember right the dub was pretty good. Hikaru threw me off a bit. Since his voice wasn't as deep as the Japanese version.

The DX VF-1 Strike Parts sold out very quickly too. After people assured me that it would be days before it would happen. :/

Speaking of the adv dub. I was looking on youtube to see uf any episodes were still on it and, while i didn't find any. No surprise i guess.

I did find an old english dub of MOSPEADAs first episode. Its certainly different.

Despite now having the full 90's VHS collection of ROBOTECH, as well as at least 3 sets of the DVD releases, I regret only getting the first 2 disks of Macross when ADV brought it out.  At the time, Best Buy was known for carrying the collected box sets later, and quickly putting them on clearance, so I decided to wait.  Then forgot about it.

It looks like back in 2014 there was an Amazon.com release that had ROBOTECH as well as the ADV sub and dub of Macross in it, so missed out there, too.

Vic did throw me off as well, as I had been so used to Tony Oliver as Rick, and while neither are deep voices, they are definitely distinct.

Dunno, though.  I would PROBABLY try to watch a dub of Macross 7 if it ever came out, but I fear that, even with my favorite voice actors, I would still despise the two main characters and have that annoy me throughout...

i remember having some vhs of macross saga in the late 80s. they were from fhe (family home entertainment). they were edited to hell and back, and then edited again for good measure. id say at least half of the series was cut out and it seemed to focus on the war part of the show. as an example, the episode "a rainy night" had only the first and last 5 minutes of the episode (possibly even less). everything with roy and claudias younger days was axed. it was ridiculous and a waste of money. had i known they were chopped up so much, i wouldnt have gotten them

I rented those very same VHS back in the 90's from my local video store. I quickly saw they were edited as stuff I remembered from the broadcast versions were missing, but at the time I didn't complain as it was the 1st time I could watch most of Macross.

Back in the day the only local channel that played it aired it at noon when I was at school and no VCR so I only caught an odd episode on days when I was home sick. 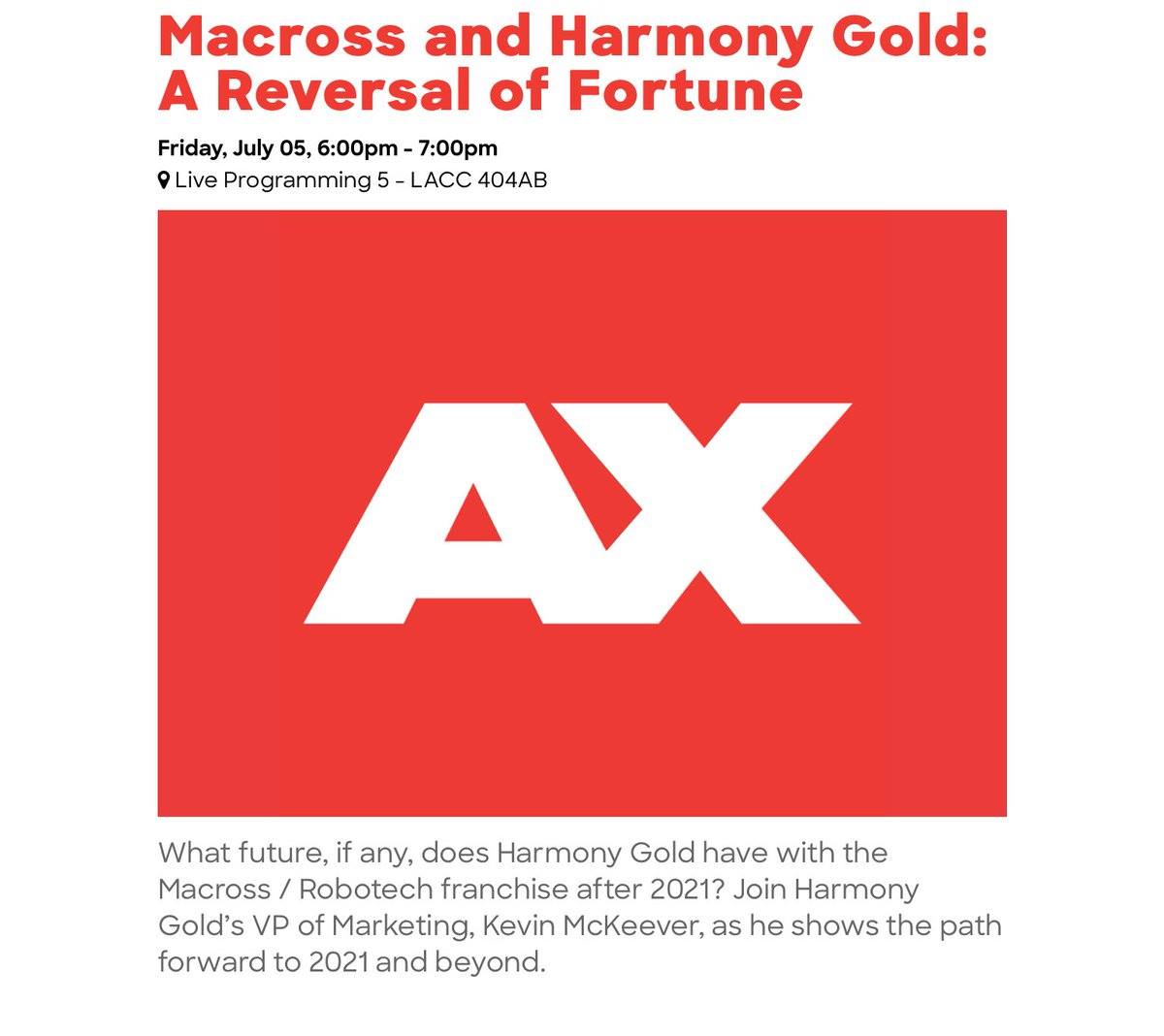 That's... interesting. In an ominous kind of way.

I mean, at this point i'm just mentally repeating to myself. FOR THE LOVE OF GOD HG, JUST GIVE UP AND LET IT GO ALREADY!

Eh, unless they announce some sort of new agreement with Taksunoku (which I don't see as likely given how contentious things have been between them), I don't think anybody cares.

Any anime they MIGHT have access to is likely well expired or not worth the fight.  They haven't made any significant production efforts in over a decade.  Their reputation has been garbage even longer, so I don't see ANY company willing to work with them.

Of course, they could blindside us all and announce a new agreement to bring Macross out in the states with assistance from Harmony Gold.

Wow. I'm surprised to see HG willing to even discuss this, so I'm sure they have something dreadful up their sleeves.

Yeah I can't tell if this is distressing or not.

Like it could be a last minute cash grab of Blu Ray releases of Robotech.

Some sort of ill conceived plot to continue Robotech without the Tatsunoko shows.

Or something far more sinister. "We don't care what Tatsunoko says, we own this stuff forever and will fight of extradition in our heavily armed bunker!"

Welp! Came across a listing for the ADV slimdisc boxed set of Macross over the weekend for 200$ U.S. and pulled the trigger.
It hurt me in the wallet as the Canadian dollar is pretty weak at the moment, but I've been obsessing over finding the dub for a while now so I'm pretty happy.

Of course you know that because I bought this it means a macross blu ray will be announced the day before I get it so... YOU'RE WELCOME EVERYBODY!

Wow is the ADV set worth that much really? Makes me glad I got mine back in the day below retail when I was working at B&N

Well, it's hard to pin down an average, as its really rare to come by, the only other seller I found was on a Mexican craigslist who was asking the equivalent of 300$, oh and then there's this nonsense.

But speaking realistically, It's a cult series with the novelty of an english dub with one of the original Japanese Actors, this coupled with its scarcity pretty much means you can name your price.

Who knows, I may even have gotten it on the cheap at 200$

Here it is for $35 bucks. Same version I have. Great quality, dub is all there, subs if you want them. I think the dub is pretty great. Get your $200 back and buy this.

Ooh, found that on ebay uk. I might jump on that myself!

I'm happy with my big blue protoculture boxset ..which I see is the ADV one people might be talking about... I honestly couldn't remember who put it out

"Expect me when I arrive" - G'kar
Ryougabot

So Amazon Prime not only has the entire Robotech series for streaming**, they also have subtitled versions of the original 3 animes that it came from. I've been sampling some here and there just to see what they were like.

The first big difference is the music. Robotech's background music, on the whole, is so. much. better. Most of the original music is either random Jpop ballads, or else generic music roughly on part with the Headmaster series -- it exists only to tell you that this is a heroic moment, or a tense moment, but it does so in the most absolutely tepid way possible. It doesn't make you feel it.

The worst moment I've run across so far was in Genesis Climber MOSPEDA, during "Hired Gun" ("Arpeggio of Murder") where the gang encounters the guy that got experimented on by the Invid and is now hunting down soldiers. The entirety of the episode's tense, murderous climax and conclusion is scored with a peppy-chill lounge jazz song that, while enjoyable on its own, has absolutely no relationship to anything happening on screen, and actively sucks the drama and emotion out of the scene.

The second big difference is in the scripting. American anime dubs are rightly stereotyped as filling every single second of screen time with characters jabbering away where there was no dialog in the original, and Robotech is no exception. The Japanese, on the other hand, have a thing for really long and inexplicable silences -- as if staring at Lunk or Rook's face in silent closeup for ten seconds will suddenly give us insight into what they're thinking. This is one area where I wish we could split the difference.

Robotech generally wasn't afraid to look death in the eye, but it still flinched sometimes. The worst and most obvious case is, again, from Genesis Climber. After Colonel Wolff has turned against his Invid allies and been killed, we see a huge squad of Invid troops looming over the town he was protecting. The Regiss gives a ridiculous voiceover about how despite this defeat, their agent will infiltrate the humans and finally allow them to defeat them, and we fade to black.

From the action on-screen, it is glaringly obvious that the Invid are about to annihilate the entire town and murder everyone in it. Sure enough, the original features ominous silence and the oblivious laughter of the doomed townspeople.

"Hired Gun" again provides a moment of ridiculous re-scripting by the American writers. Rook feeds us a bunch of whiffle about how Dusty is suddenly a hero because he pushed her out of the way and shot one Invid before being annihilated. In the original, there's barely any dialog, but certainly nobody eulogizes the guy for being a hero. It's all the more inane when you discover that the dub script changes Dusty's motivation -- he isn't killing his friends who he thinks abandoned him; he's trying to kill 100 soldiers because the Invid said they'd restore his body if he did. The X's on his arm represent 10 soldiers each; he's close to his goal.

A third point is how the original series explains some strange incongruities from Robotech. Not just the obvious ones, like how New York City is still standing, but the more weird ones, too -- like where did those three old soldiers and their ancient spaceship come from? Genesis Climber explains it: the first attempt to liberate Earth was 30 years ago. Scott's force was the second. It also makes clear that he's not the sole survivor; many others touched down all over the globe, which is where all those soldiers wandering around have come from.

In general I approve of the name changes, but why did Jim need to become Lunk, and Ray become Rand?

** This version, unfortunately, has been "digitally remastered" which means a ton of crappy sound effects were slathered on top of it to "take advantage of" surround sound or whatever. And I do mean a TON. The original, distinctive sound effects are almost buried under this wall of scratchy vague noise.

Robert is made to withstand plenty of play, and transforms from car to robot! Go, Robert, go!

Why will we solve after Robert grasps the abysmal winter's ulcer? He may change rural tailors, do you join them? The films, tapes, and spoons are all good and fresh.

Meanwhile, UK Amazon Prime has... just the Shadow Chronicles. Although you can watch Macross II if you pay for it. We certainly don't have subs of Macross or the others.

The first big difference is the music. Robotech's background music, on the whole, is so. much. better. Most of the original music is either random Jpop ballads, or else generic music roughly on part with the Headmaster series -- it exists only to tell you that this is a heroic moment, or a tense moment, but it does so in the most absolutely tepid way possible. It doesn't make you feel it.

i spent $100 importing the soundtrack to macross back in the early 90s, so i have to say the music is brilliant just for that reason

The second big difference is in the scripting. American anime dubs are rightly stereotyped as filling every single second of screen time with characters jabbering away where there was no dialog in the original, and Robotech is no exception. The Japanese, on the other hand, have a thing for really long and inexplicable silences -- as if staring at Lunk or Rook's face in silent closeup for ten seconds will suddenly give us insight into what they're thinking. This is one area where I wish we could split the difference.

but why did Jim need to become Lunk

i think they were trying to make him the "big, tough dumb guy" in the group, so its probly short for lunkhead. i got nothin about rands name though

somewhat related to the topic-after growing up (in the 80s) watching clash of the bionoids, vengence of the space pirate and revenge of the ninja warrior, thanks to you tube and tubi i have now seen do you remember love, arcadia of my youth and the dagger of kamui.