The Next console generation: Things are looking up

Fallout 76 update: it gets even better!

You know those bright, new, special NPCs they just introduced?

Gee Ironbite why aren't you playing what is essentially a multiplayer mod for Fallout 4?

I've seriously not heard a single human being seriously suggest playing Fallout 76 since it was released. If someone really was trying to get you to play it at some point, they probably just hate you.

What's weird to me is this:

- Puyo Puyo is a spin-off of the Madou Monogatari series

- They don't own Madou Monogatari

- They also own the rights to characters from Madou Monogatari, since most of the characters are in Puyo Puyo

- The company D4 Enterprise own the rights to Madou Monogatari, but none of the characters

So what this means is that D4 can make a Madou Monogatari game but it can't have anything to do with any of the previous games because they don't own any of the characters, they only own the IP itself. 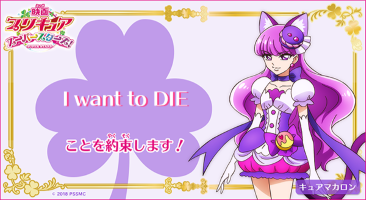 Copyright law is a hot mess.

On a side note, I tried to watch a playthrough of Waku Waku 7, a 90s fighting game that predates the Pokemon mass seizure incident and it shows. I couldn't finish the video because of how badly everything was flashing.

I mean I love Tropico 3 so I'm not really complaining but still.

Return of the Maxx

The character with a Nazi-like aesthetic has a theme song called "Society"? A part of me thinks it's not a coincidence.

you really looked at the character named hugging potemkin and thought his aesthetic was 'nazi'????

you really looked at the character named hugging potemkin and thought his aesthetic was 'nazi'????

I honestly thought the Potemkin was a german battleship up to this point.

But the unintentional coincidence is still there, because chuds love Russia too.

So I decided to buy a bond in OSRS to get myself two weeks worth of pay-to-play and here's something I don't get:

- there's a (mostly) Member's only feature called Treasure Trails. You have to get a clue scroll, which a drop from various monsters in the game, follow different clues on them to get another clue scroll until you eventually get a casket which contains a variety of items

- One of the clue types you can get are coordinate clues, which you can only get on medium, hard, elite, and master clue scrolls

- On hard clues and above, the coordinate clue might require you to go into the Wilderness, which is the sole area of the game for player killing outside of minigames and player-owned houses

And like, I don't get it? You're going into an area of the game specifically designed for player killing and you're saying you got griefed because someone PKed you???

Like, I actually had a hard Treasure Trail earlier today that did give me a coordinate clue in the Wilderness. Wanna know what I brought with me?

I brought a spade (which you need to dig at the coordinates), the clue scroll itself, and a dragon dagger super poison (because when you're on a hard clue scroll, you have to fight a level 65 enemy when you get a coordinate clue in the Wildy).

So I had three items on me.

Wanna know the number of items you keep by default in RuneScape if you die (to player or monster)?

I was risking absolutely zero wealth and yes, after I killed the enemy and got my next clue, I got PKed. I didn't make a fuss about 'why are you killing someone who's only here for a clue scroll!!' nor bitch about some mean PKer griefing me, I didn't do anything because, like I said, I wasn't risking anything, if I died all that'd happen is I'd respawn at my respawn location and it'd be off to do the next step in my clue scroll, and I was in an area specifically meant for player killing, I'm as much a fair target while I'm in there as someone wearing their best equipment.

Hell, I probably coulda thanked the dude who PKed me because it saved me a trip out of the Wilderness lol.

I think thats a universal constant in any multiplayer game. Some players will whine about other players playing as the game is intended.

I used to be super active in an online game called Star Pirates. You play a pirate. In space. You attack other players and NPCs, raid them for cargo, make your ship bigger, and get better weapons, engines, and shields so you can take on bigger targets. That is, essentially, the game, yet it was amazing how many players complained about other players playing the game exactly as designed. It was a weekly occurrence. I think some players just dont get it.

I also love watching people who jump into high-difficulty content and then complain it's too hard. It's called Savage mode, what did you expect?

It can be addicting. Its still around, but the last time I logged in was almost 2 years ago. The community then was still pretty friendly.

It is free to play, but there are a lot of incentives to be a paid player. That said, there are ways to achieve paid status through an in-game market, so a free player can achieve most goals. It just takes longer.

"To be a male anime protagonist who can do whatever he wants" is the real answer.

So I just finished Ending E. Haven't decided yet if I'll go back to finish all 26 endings.

basically all these did was allow you to redeem game codes, redownload games, and download updates

but like with them shutting down in a few months, nintendo has confirmed that you will NOT be able to redownload games if you delete them nor download updates

Geez that's messed up. The ability to redownload things is one of the conditions on which we've all accepted the dystopian reality of having platform maintainers curate our own collections of purchased software. Pick a lane or go back to CDs, assholes.


12 user(s) are reading this topic