Citizen
There is one more episode.... which seems to have leaked or aired early. Youtube spoiled an upcoming scene already

Citizen
The last episode is out already?!? Where?!?

Just saw the 25th ep but could already tell the last ep title starts with a D because the full season titles put together says Invitation to Kneel Before Zod. It could be Zoe. Or Zot. Or something, haha

Rocket totally should have used her power right of the bat and saved some fighting, haha. I'm guessing she went off to try and save that other person, I hope.

He just went limp. Viagra will save him. Kidding.

I became a reader of the Legion when the Legionnaires title started (art by Sprouse. I didn't actually become a huge fan until the Zero Hour reboot, 16 issues later) and one of the first villains I read there was the Emerald Empress. She's powerful and terrifying to me so it much much worse now in the show.

Though I love the inclusion, I have to wonder why? A couple of rogue Kryptons are scary destructive enough.

(In the arc I read, the Eye latched on to a weak willed little girl who used it's power to attack the Legion bullies who made fun of her powers and weight. The Eye eventually erased the girl's personality and took over.

The second time I read of the Eye was in the Reboot, in one of my favorite arcs, where it took over a Legionnaire, yow!)

Citizen
That was an awesome and very satisfying finale.

Citizen
It was a fight. A bit gruesome way to end it but, well, I suppose it's an anomaly thing.

I would have wanted more Legion but I guess they didn't want other members poking their nose into the mission, haha. Loved the future implications tho.

Connor got his head right but, ugh, I didn't like the way it looked at the end.

Also, who's the dog in the middle again?

Citizen
Yes, she had him when her and Wally lived together. Which made it all the sadder when he was cuddling the Wally plush toy during the end credits in season 3.

I agree with Sabr that was a great season finale. Very satisfying and well deserved fate for one character in particular.

It was so cool how it all came full circle and explained how two seemingly incongruous truths were, in fact, not contradictory after all.

I was kinda waiting for a shot where all the intro with arcs members to group together (before the actually marriage) and just say how good it is to be with each other or say how they can put their phantoms behind them or something. Might seem like a finale finale though.

Oh oh oh I LOVED how Icicle Junior was there! Connor invited him and they're still friends! (Is he going back to jail after or is he reformed or something?)

If they get another season, I don't think I want another character per character arc. Nightwing, Rocket and Zatanna and even Aqualad really just got their personal stories just shoe'd in. No need to try and maintain the illusion.

Though if they would, they should go with... Blue Beetle, Kid Flash, Static (yes please!), Lagoon Boy (YES please!), Beast Boy and Arsenal?

the kryponian remains plastered on the wall of the cave were not Connor, who was sumberged in Magma, but Zod jr

Citizen
Holy cow! I remember that! Morbid but, yeah.

Staff member
Council of Elders
Citizen
That was a great season!

I freaking loved the wedding! Poor Garth though, I was hoping that seeing Connor alive and well would help him more.

Beast Boy's depression thing had a lot of screentime. I think Violet's dilemma had one episode. Hmm, I can't recall other mental and social issues they dealt with.

I really think Mary Marvel should have had her... narcissism (?), insecurity (?) dealt with, since letting her go unchecked became dangerous. And it's really not fair, dang it. Mary was one of the sweetest comic book personalities. I know it's for the story but, dang, making her evil?

Citizen
Working off the prescedent of her becoming a Fury around the time of Final Crisis in the comics I'd say. Not one of the most well liked stories to be adapting though, but considering they also mentioned Sanctuary, Weisman is all in on stepping on those landmines. 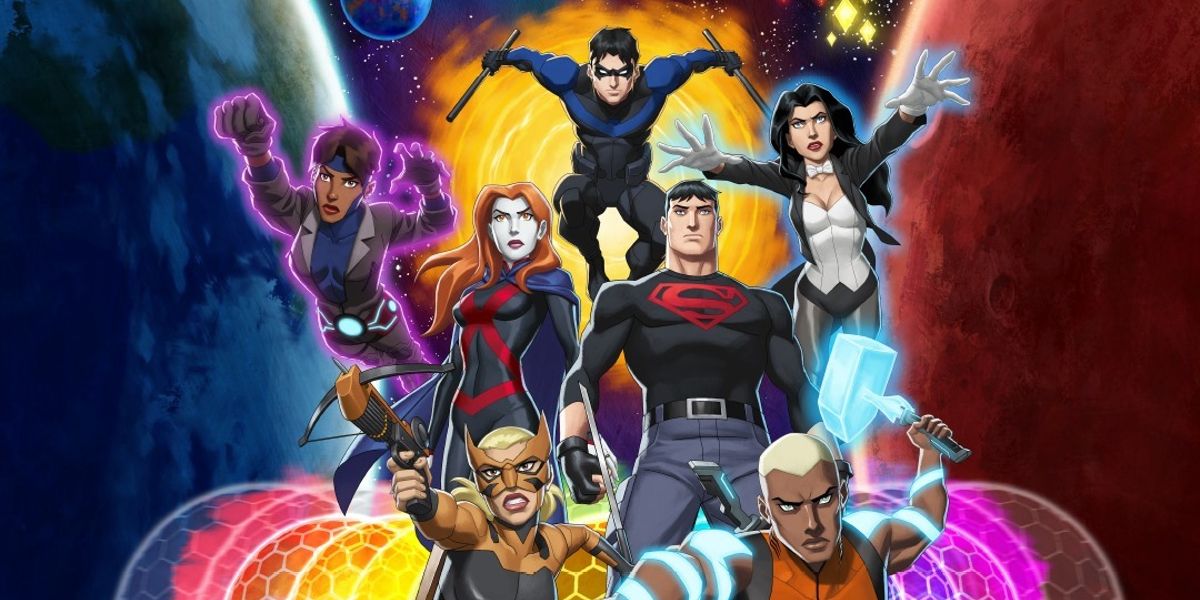 Young Justice: HBO Max Has No Plans for a Fifth Season

HBO Max and Warner Bros. reportedly have no intentions to renew DC animated series Young Justice for Season 5 after its move from DC Universe.

Also, I hate what Greg Weisman says about YJ having no end. Like, he'll never give it a proper ending. So there would never be closure for it.

Citizen
This was a better ending point than season 2 so...fine.
S

Citizen
To be fair, Young Justice got more than a TON other cult favorite cartoons have gotten.

*Pours a couple out for Megas XLR and Thundercats 2011* 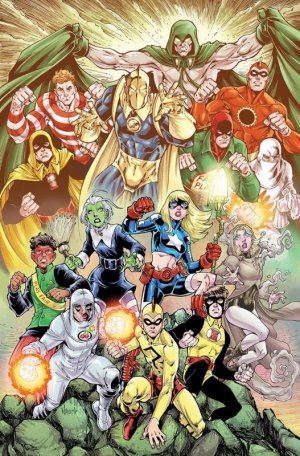 Holy cow, this is a variant cover for something called New Golden Age Special and will lead into a mini series called Stargirl Lost Children.

Geoff Johns is bringing her back? But the series ended with brother Harm killing himself off page and Greta being turned human by Doug-seid. Since Secret is a Warder who ferrys souls to the otherside, is Geoff Johns going to kill her again? Poor Greta.

Anyway, since I don't follow JSA or DC comics anymore, I'm curious about the other kids. You can tell the obvious mentors among the six but who in the world is the green witch girl? Process of elimination would have her be Dr. Fate's sidekick, if Secret is Spectre's ward.

I tried googling Lost Children Stargirl but no info on names. Does anybody know?

(Also, I didn't like that one off Secret episode in season 1 of the YJ show, for introducing Secret and Harm and not doing anything with them. Peter David wrote it but it didn't contribute much to the show advancement, except for the trick or treating side story.)
Z

Citizen
I think a good chunk of those characters are actually brand new. For example, I don't think Mr Terrific ever had a sidekick.

The sidekick with the question mark on his chest is Wing, the Crimson Avenger's sidekick.

"Cherry Bomb" HAS appeared before...in Earth-Prime #4 (Stargirl), which is a tie-in comic to the CW TV show.

Do you ever buy a comic with low expectations and then find yourself blown out of the water? That’s what happened with this latest DC tie-in to the WB superhero shows. I saw publicity for the first… 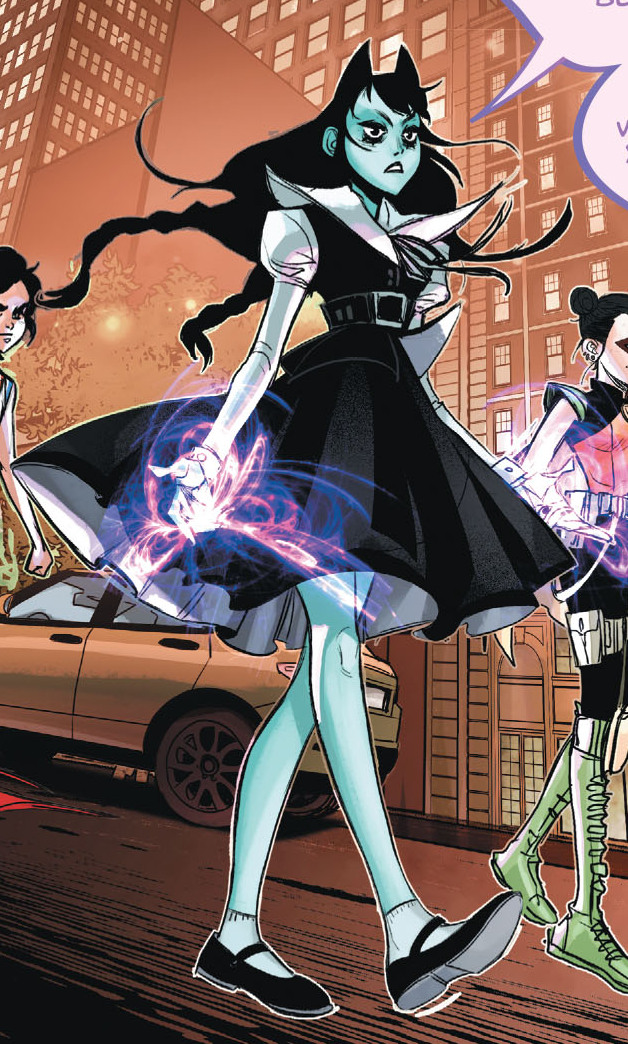 Klarienne the Witch-Girl is a member of the Earth 11's Teen Justice. Zatara from the Justice Guild is her mentor, and, as a user of magick, she has great powers. She alone initially took down Superwoman and Batwoman at the same time, but the effect of her magick would not last long as she... 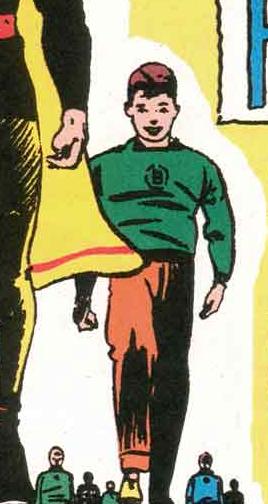 Jimmy Martin was the founding member of the Minute Men of America. Jimmy Martin's brother Billy died under suspicious circumstances in a sweatshop factory. Hour-Man investigated, and in the process got acquainted with the late Billy's mother, and his brother James. Jimmy was a ham radio... kicks his feet up on his desk and interlaces his hands behind his head while smiling I thought you’d like that. 😉 NGL, this '90s variant by Joe Quinones just might be the cover of Justice Society of America #1 that I snag:

Citizen
Holy cow, thanks a lot! You've been following the related titles? Know anything about Secret's return?

Klarienne? Hmm, skin color isn't quite right and I don't see a Teekl but Geoff Johns usually finds obscure characters before making a new one. Could be cool. Hope this female Klarion isn't crazy. I thought she was a sidekick of the Enchantress, the witch lady who Felix Faust killed in Judgement Day.

Can't wait to see how it unfolds but, well, Geoff Johns is known to kill teen heroes. Even baby Wildebeest. And live action villain kids in Stargirl.