Citizen
Yeah, some of this is pretty broad speculation. And, I've been following some of it. It's just...the return of the JSA has been delayed for YEARS and some of these plot lines have been around for 4 or 5 years, at this point. Plans have clearly been changing in the middle of these storylines.

The Stargirl Spring Break Special (which came out last year) works as a prequel to this storyline, since some of the sidekicks show up there. Secret showed up here with some of the other sidekicks trapped...somewhere (or maybe sometime?). Secret shows up in all of one panel in shadows, so don't get too excited about this appearance.

The end of Flashpoint Beyond (which is out in a few months) has been teased to ALSO lead into this.

I don't know anything specifically about Secret, otherwise. With all the reboots and crisises and hypertimelines going on in DC right now, chances are some things got reset. They probably won't explain how she got her powers back right away. Darkseid's...MANY changes these last few years probably has something to do with it, maybe.

A quick summary of Darkseid's many changes:

In the New 52, Darkseid fought with the Anti-Monitor and died. He was resurrected by his daughter Grail in the body of the the evil Superwoman of Earth-3's baby. He gets re-aged...then de-aged again.

During Rebirth, toddler Darkseid kills the Greek Demi-Gods and absorbs their power to become a adult again. He manipulates and works with Justice League Odyssey in order to try to create a cosmic space Ark to escape all of reality which threatens to be destroyed by the creator of the DC multiverse, Perpetua.

After the events of Death Metal where the multiverse is re-created, Darkseid is fused with all of his multiversal variants and becomes the "Prime Darkseid". During Infinite Frontier, he tries to fight against The Great Darkness, the source of all evil, but is revealed to be it's metaphorical AND literal "left hand" in Justice League Incarnate and gets brainwashed into joining it's Dark Army. Now, he is being controlled by Pariah, the last survivor of the previous multiverse, in his bid to recreate the old pre-Crisis on Infinite Earths multiverse by manipulating the nostalgia of superheroes.

...So, yeah, Darkseid's been through some stuff. Poor ol' Doug.
And I think the kids will survive this time around. Geoff Johns has been trying to rebuild a bit of hope back into the DC universe for some time now. Chances are these kids might even get into the JSA itself, or start a new Infinity Inc or something.

Edit:
Oh, here's another candidate for the Witch-Girl. Beulah Bleak, Klarion's sister from Seven Soldiers. I forgot all about her because she's only been in 2 issues. 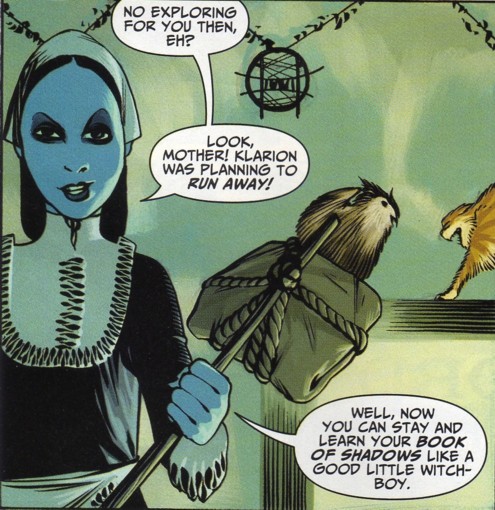 Beulah is the older sister of Klarion the Witch-Boy. Beulah lived a quiet life assisting her mother Charity, until one day when the Sheeda began appearing in her native Limbo Town. The Submissionaries who ran the town, believing that the Sheeda had come to punish the town for wickedness...

Citizen
Uh, what title did all that Darkseid stuff happen in? Who was the writer who lead the event?

I heard of Death Metal but the umbrella name is horrible, haha.

-
So Secret was in shadow, so can't say if she got her powers back or not. Oh well.

-
Oh, from Grant Morrison 's Seven Soldiers. That was very clever at parts but the final issue was muddled.
Z

Citizen
Oh, most of the Darkseid stuff has been happening in different books over the years.

The fight against the Greek Gods is from Wonder Woman Children of the Gods and Amazons Attacked (Wonder Woman 2017 #31-45, by James Robinson)

The entirety of Justice League Odyssey (2018 #1-25, by Joshua Williamson and Dan Abnett)

(It's worth mentioning that Justice League Odyssey is basically a spin off of Scott Snyders whole Justice League/Batman Who Laughs saga. Which...um...I'll just leave a link. It gets complicated. Arguably, it STARTS with the original Dark Nights Metal, continues in his entire Justice League run, and ends with Dark Nights Death Metal.)

(I'll just warn you right now. Death Metal...is kind of a crossover with EVERY OTHER CRISIS DC has EVER done. Even Convergence and Doomsday Clock. It helps to be familiar with ALL of DC event history because it comes up.)


The Prime Darkseid stuff is from in Joshua William's event saga starting in 2021. Infinite Frontier 0-6. Then Justice League Incarnate 1-6. 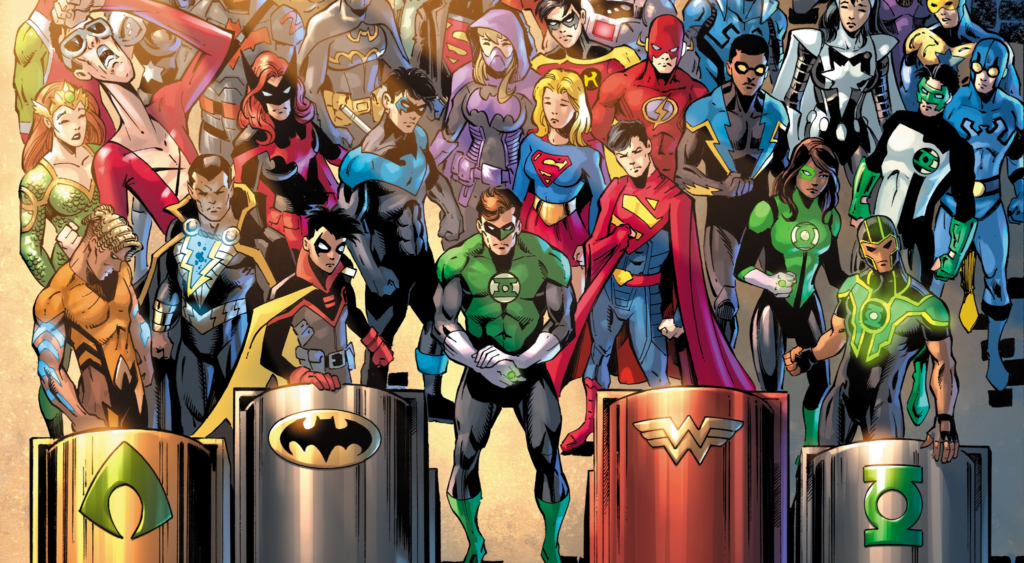 www.comicbookherald.com
(The Batman Shadow War stuff PROBABLY isn't necessary reading in the link above. But, it gives context to Deathstroke's actions in Dark Crisis. )

Citizen
... that's a lot. Well, I have faith in Geoff Johns. Even tho he kills off some teen heroes.

Citizen
Oh I didn't know Greg Weisman had a five year plan. So if it was suppose to end, if would have been in the fifth season. (Even with that article saying that YJ is never suppose to have an ending, boo).

I forget but is Darkseid is part of the Light, right? Or not? Cuz it would bite if the final reveal would be the New Gods were actually the bad guys.

Fero McPigletron said:
I forget but is Darkseid is part of the Light, right?
Click to expand...

At the very least, he's an associate or ally of theirs. He's got some kind of very long-term deal going on with Vandal Savage. 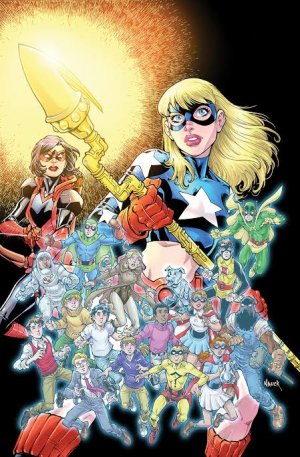 Just a follow up but this is the cover of Stargirl and the Lost Children six issue mini.

Secret is still there but now the green skinned witch girl is missing. Odd.
Z

Citizen
Spoilers for Flashpoint Beyond 5, out today, but...it reveals who all those young heroes on the Stargirl cover are. 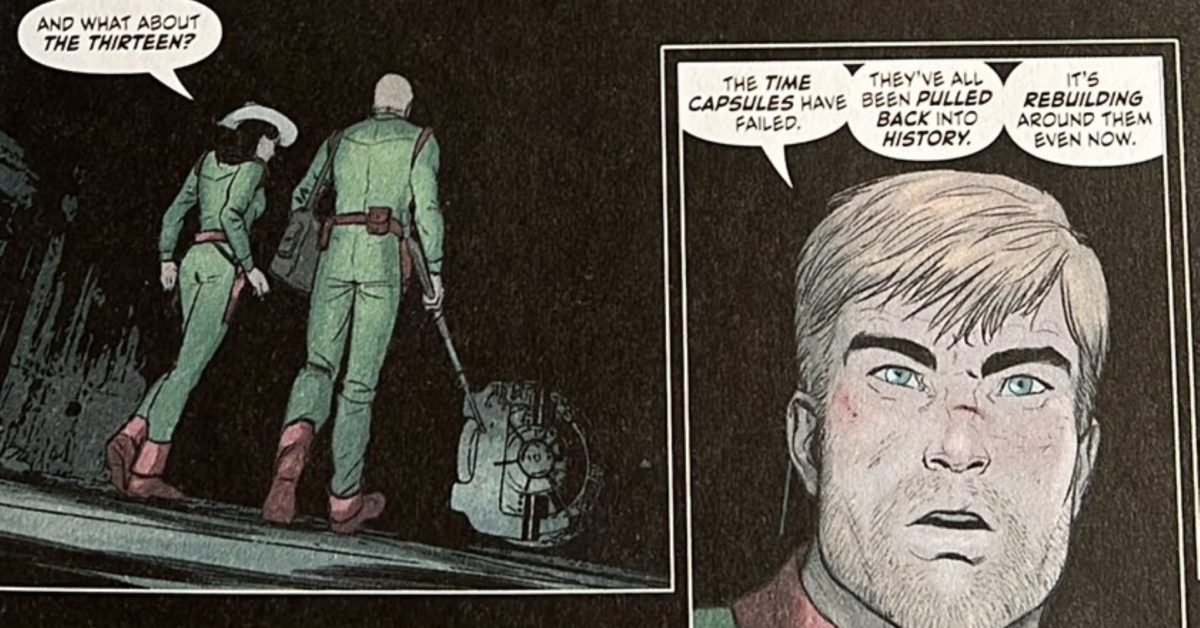 Who Are The 13 New DC Continuity Characters From Flashpoint Beyond?

The solicitation for the DC New Golden Age one-shot, out next month, by Geoff Johns, Steve Lieber, Jerry Ordway, and Diego Olortegui is solicited thus;
bleedingcool.com

They're...brand new golden age sidekicks and..."predecessor" heroes, I guess, whatever the opposite of a legacy is? They're all new characters that DC's going to retcon in as old WW2 era heroes. Apparently, the Time Masters had exiled them outside of Hypertime for...reasons, I guess? Not sure if that's even a plot point or just a excuse for why we've never heard of these guys before.

It's a weird move. But, at least we know who some of these characters are, now.

There MIGHT be some problems with "Ladybug" given the (rather famous) French Miraculous Ladybug cartoon.
Last edited: Oct 18, 2022

Citizen
Does any of this have anything to do with the cartoon that this thread is about?

Honest question, since I wouldn't know.

Citizen
Thanks for the link! Salem the Witch Girl, hahaha!

The link to all this Stargirl comic stuff to Young Justice is the involvement of Secret, who was a member of the original comic team. She appeared in one episode in season 1. In the comics, she's possibly going to be active again, maybe?

Edit - darn it, something is off with the cover of characters. 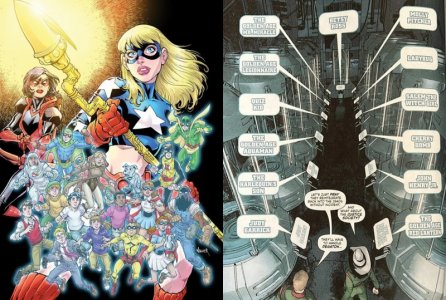 There's 17 kids on the cover, including the Metalman doggy but Thirteen Lost Children. There's six females named on the pods but only five shown too, which is even less because you don't count Secret and Salem isn't there since there's no green skinned girl.

Of the five on the cover, you can identify

-Cherry Bomb in the hazmat suit
-Secret near the middle
-Betsy Ross probably the flag cape girl
-Molly Pitcher as the lower lady with the... pitcher of water.
-unknown purple sweater ponytailed girl, maybe Judy Garrick? Could also be the Golden Age Red Lantern or Legionnaire since those names could be male or female.

I'm very curious if the Legionnaire is a retro alien kid from the Legion. Unless he's the doggy, haha

Edit - gosh dang it! Those plain clothes boys at the side are the Newsboys Legion! That means that the Golden Age Legionnaire is probably not a Legion of Super-Heroes reference! Argh! 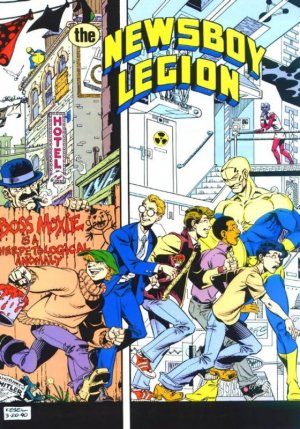