Darth_Prime said:
Because I keep seeing him on Instagram. And because his toy was kind of ruined by the connection ports. I would LOVE to see an updated version of RID Landfill in Legacy.
Click to expand...

I got the set off eBay several years ago, and my interest quickly waned because of how fiddly Grimlock is to get into every one of his modes. >.< Hightower and Heavy Load at least relegated their fiddliness to their respective arm modes.

I still love the unique combination setup though, and I wouldn't mind seeing it redone - maybe with a significantly less-fiddly Grimlock and actually securing the arm assemblies to the torso in combined mode. Then again, given the current design team's tendencies, they might just make them all blocks with limbs that stack together and call it a day. =/

Citizen
I'd always wanted to get another Hightower and bash him into a new figure in a blue color scheme.

Citizen
I do think it was neat they reused much of Grimlock's vehicle-to-robot transformation for Studio Series Scrapmetal.
G

Citizen
Iguanus is very nice, even though the instructions mention using Hot Rod and Skywarps weapons to make the sword, I think we'll see two Autobots and one Decepticon next time with the same weapons.

Citizen
So I found Bulkhead today at Target. After seeing that the new SS Deluxes and Voyagers kept the plastic to protect the figure, I assumed they would do the same with Legacy, but nope, they have "steal me" packaging. I can't wait to find them missing heads and/or accessories. And with places like Amazing shipping things in bubble mailers (I just got a SS Ratchet that I have to return because the packaging is crushed and his chest is obviously broken in package.), we'll see what happens for people who like to keep the packaging...

The figure itself is really cool, though.

Citizen
Might be time to step up to dedicated collector shops like BBTS or Entertainment Earth or Pulse then.

Of course, given my local stores don’t carry the full product range and are seeming at the ass end of distribution, I’ve resigned myself to those sources for years now.

Steevy Maximus said:
Might be time to step up to dedicated collector shops like BBTS or Entertainment Earth or Pulse then.

Of course, given my local stores don’t carry the full product range and are seeming at the ass end of distribution, I’ve resigned myself to those sources for years now.
Click to expand...


I have been buying all of my TFs off of BBTS or Pulse for the past two years and I don't regret it. So much easier to just pre-order everything and hunt down just the exclusives in store.

Citizen
I found Bulkhead today at Target still in the shipping box. I opened the box and was thankful to get him 'untouched' since the front window is opened now.
P

Citizen
My biggest annoyance other than the easier theft is that toy-swapping idiots are going to have a field day with the closed boxes, and it's impossible to examine the toy in-store to see if everything's right till it's too late. I remember as a kid hating the closed-box type packages because you often couldn't see what the toy really WAS, or how it compared to the package art. Now we're back to that again. The internet makes getting a clear idea of it easier, but still doesn't protect you from people playing shenanigans, or simply not being the sort of person who can check everything, like a grandparent who's trying to get something for a kid. I recently helped a couple at Wal-Mart, even though I don't work there, who were trying to get a Transformer and were not aware that what they were holding didn't actually transform. I helped them find an alternative that did.

Citizen
Do we know what wave 2 is looking like? More stunticons, but I don’t think any official images have come out have they? Do we know about leader or commander class?

Citizen
I mean we don't have pictures of anything beyond wave one, but if you trust the usually-true rumors we know like 90% or more of the whole line I think. It's been awhile since I looked at that stuff though so maybe I'm misremembering.

I think it's pretty firmly established (as much as it can be and still be a rumor) that the Commander will be Motormaster/Menasor and Titan is TF:Cybertron Metroplex


ZacWilliam, unofficial of course but the type of rumor that seems unlikely to be wrong.

Staff member
Council of Elders
Citizen
Wave 1 might actually hit stores before we see any pictures of wave 2.

Citizen
Instead of Road Hauler I’d like to have seen Cybertron Mudflap. Either way, I’ll prob gab him as I’ve already got Inferno, Grapple and Artfire. What’s one more of the mold? Lol. 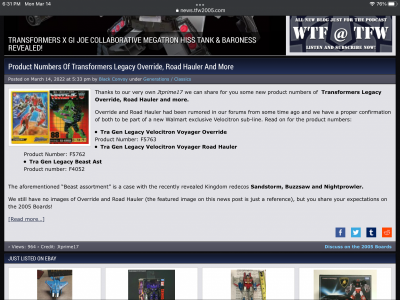 CoffeeHorse said:
Wave 1 might actually hit stores before we see any pictures of wave 2.
Click to expand...

Given Wave 1 has hit stores in many parts of the world, probably yes.
E

Citizen
I myself am eagerly anticipating Road Hauler. Dude needs some love here in the West.

Echowarrior said:
I myself am eagerly anticipating Road Hauler. Dude needs some love here in the West.
Click to expand...

♪ He geeeets no thanks, and that ain't right! He's the Unsung Hero of the Jobsite! ♪

Woot! I can't wait for most of those!
P

Citizen
Constructicon Grapple/Inferno? Weird. I know a little boy who will want to jump on that opportunity, though, he always wants to borrow Hook and I prefer to keep the Constructicons together. If I find it before he does I might get it for his birthday and call it the 'stunt double'.
You must log in or register to reply here.
Share:
Facebook Twitter Reddit Pinterest Tumblr WhatsApp Email Share Link
Top Bottom