Citizen
Wow! I like how the front of his arms are rounded, but the backs are squared off, so they look more like part of a vehicle in his alt-mode. That's really cool. Too me a second to realize those were indeed his arms; the shapes didn't line up until I realized the back was sculpted differently than the front.

Sabrblade said:
All you had to do was just scroll down the first page of the Transformers Discussion forum. It's right here.


You're describing only how it looks on mobile. On PC it look like this, joined horizontally: 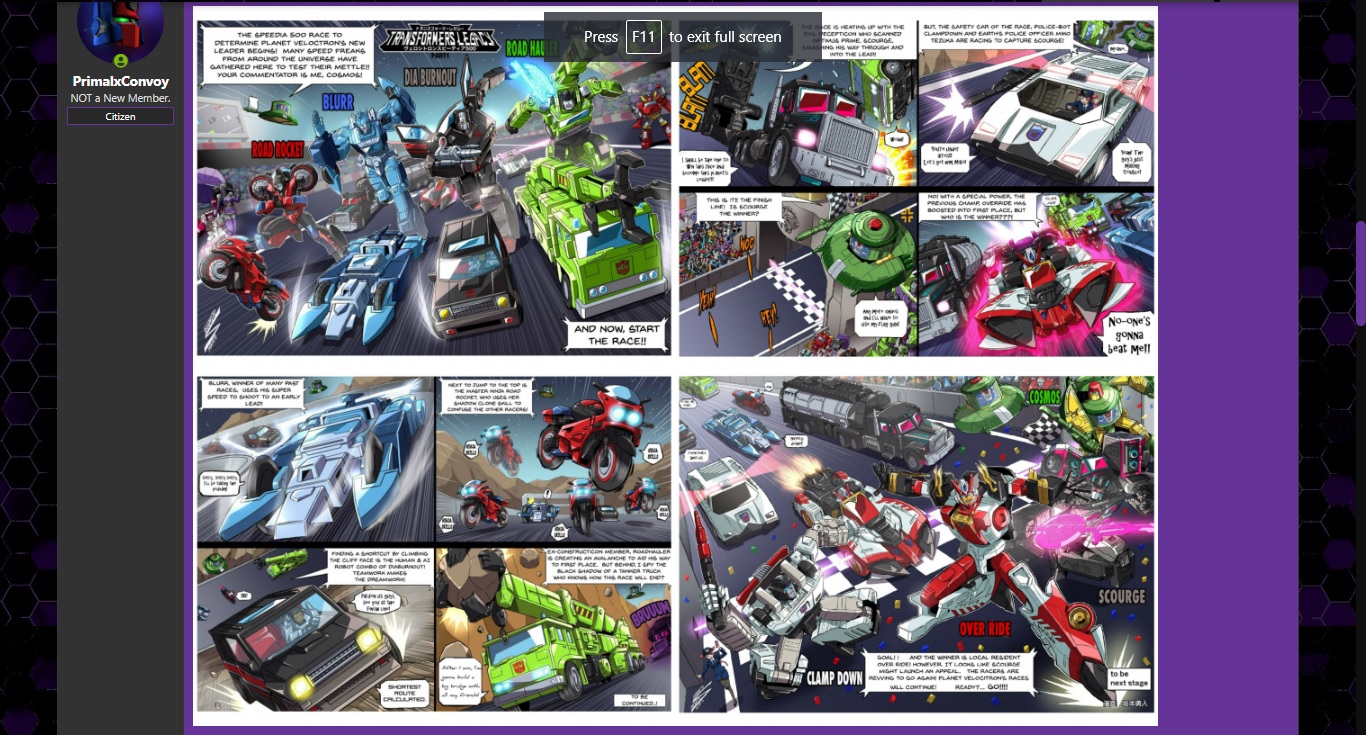 They're not joined horizontally. There are two separate files. Again, that's a limitation of the website, not my uploads.

Thanks for the info about the discussion forum. You're most welcome to repost them there, in a way that suits your PC, if you wish.
N

Citizen
For larger images that fall victim to the board software limitation, just use Imgur.
S

Citizen
I am really looking forward to getting Legacy Wildrider (Wildrider was always one of my favorite Stunticons). The good news is that he is scheduled to arrive on Thursday. The bad news? I live in Florida, and it just so happens that Hurricane Ian will be touching down on Thursday. I guess it's a wait-and-see thing, but I kind of wish he were arriving next week now.

Powered Convoy said:
I think we should wait to see the official reveal before judging too harshly.

Someone on TFW pointed out there are some aspects of the fake Ferrari that Wildrider is having some Countach details too.

Though I admit a new front end and backend would have been ideal.
Click to expand...

Yeah, while a full reshell would've been cool, I guess they had to find their cost saving somewhere and frankly I appreciate the not-Porsche sculpt for Dead End. I do wish they'd been able to do a little more resculpting on the front of the cars, but there are quite a few Lambo-esque differences from the doors back. 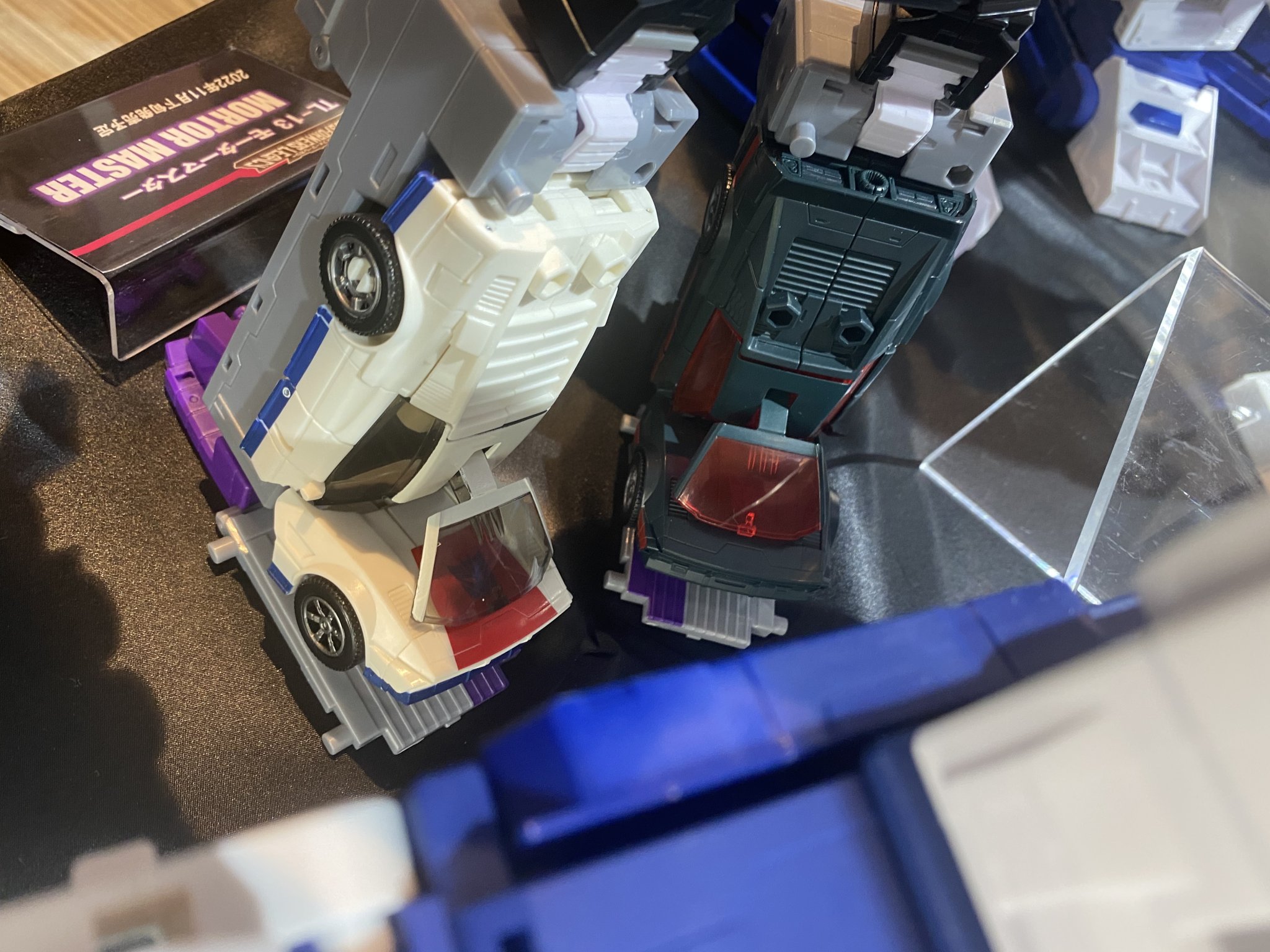 Citizen
There are definitely some newly-molded Lambo-esque cues from the doors back that look good; the rear vents and louvers are nice touches (but a spoiler would be best). It just would have looked the part more to have tweaked the front end a bit.

Ultimately, I think what bothers me the most is that the other vehicles are so close to their G1 counterparts and this Breakdown took (is taking?) so long to reveal, that I can't help feeling deflated. If it were possible, I would almost rather they revealed Breakdown sooner and then left maybe Dead End or Dragstrip as the final reveal. Oh well, it's not like I won't get it, it's just kind of a dumb move, IMO.

Citizen
I just think it’s wild they go to Takara with cost saving remold ideas for Cosmos and Override and Takara is like “naw, have some whole new molds” and then when it’s time to finish up a Combiner people have already sunk $150 into they’re like “We’ll just uhh repaint Wild Rider!”
S

Citizen
And the thing is, regardless of how good the inevitable 3rd party upgrade kits are - that will cost as much as Breakdown, btw - it will always just kind of be Wildrider cosplaying as Breakdown.

Edit: I still will reserve final judgement until seeing the finished product, but seeing the pics, it is difficult to imagine how much better it will be.
N

Citizen
Lots of leaked Breakdown photos and videos in this thread:

I'm currently away from my computer, so I can't embed them.

A third party will have to replace two thirds of the shell and the spoiler to make it work, which they are unlikely do to.

The Phazer said:
That looks terrible.

A third party will have to replace two thirds of the shell and the spoiler to make it work, which they are unlikely do to.

They might just make a full figure, a-la Fans Project?

Citizen
Eh. It's not terrible, not ideal. Strange that they didn't make the spoiler in 2 halves so that it could stay with the legs. Half thinking about trying to slice it down the middle myself. I think a couple of dividing lines on the windows would have helped, too: 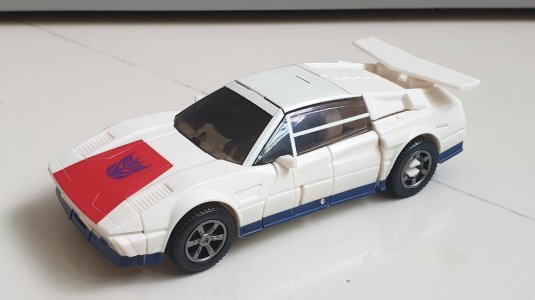 Citizen
He looks good. I do wish the spoiler split or stored somewhere better in robot mode.

Citizen
That's pretty funny. He looks like one of those Countach kit cars built off an old Fiero.

Dividing up the windows does help though. I'm probably do that.

It does at least seem like more money was spent on differentiating the bot mode too.
Last edited: Sep 28, 2022

This line baffels me me we get cool Core class Pretender guys (Iguanus and Bombburst) and then someone comes along and gives us a lackluster Dlx class Skullgrin.. Dragstrip Deadend and Wildrider look great and then Breakdown looks like this...

Citizen
On the one hand, it does seem like there's no rhyme or reason to which figures get the engineering to shine and which figures seem to have been...phoned in? Or at least suffered from budgetary needs.

On the other hand, I have the G1 Stunticons for my Gobot-scale collection, and the CW G2 set+Offroad for my larger scale collection. I was never really planning on getting the Legacy Stunticons anyway, too many other must-have figures in the line, so I guess I don't have a horse in this particular race?

Citizen
So, people want them to create an entirely new mold that just happens to transform pretty much the exact same as another becuase he's still got to work as carmor for Menasor; and since 90% of you are likely to keep him in Menasor mode, will actually never be seen becuase he forms a calf?

Shadewing said:
So, people want them to create an entirely new mold that just happens to transform pretty much the exact same as another becuase he's still got to work as carmor for Menasor; and since 90% of you are likely to keep him in Menasor mode, will actually never be seen becuase he forms a calf?
Click to expand...

No, I think just a little more remolding would have been fine. The already did the back end of the car, removing those vents and adding some sunken headlights would have gone a long way to making it look more like a Lambo and less like Wildrider. 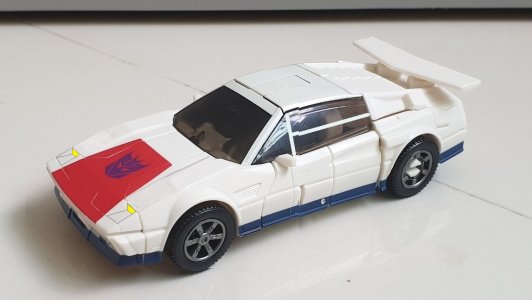