Staff member
Council of Elders
Citizen
In this case the vehicle mode isn't radically different. There is really nothing complicated about this unless they think they would have to find a way to keep the cape.

Okay I like the cape. But a well articulated toy would be better off without the cape anyway.

Citizen
Yeah, the entire point is because *both* modes look pretty similar.

There wasn’t a big push for an Armada Blurr from Hoist for example.
S

Sabrblade said:
Yeah, talk of Blurr has mostly come from the "Let's see, who can they retool Pointblank into?" crowd of fans.
Click to expand...

No, it was on “the big leak” from last year.

When the leakers revealed 2022’s product line up, the information provided AT THAT TIME was that Pointblank was going to be remolded into Armada Blurr. Override and Cosmos were intended to be retools of SS Hot rod and Origins BB, which Hasbro themselves even revealed those original plans.

That list has basically run to completely accurate in characters, 80-90% accurate in how the characters were addressed. At some point, the plan for an Armada Blurr was dropped, and we got the IDW version instead.

The deviations wouldn’t be any more extreme than what has been done to Elita 1, or the Pretenders, or the Prime Universe interpretations.
Last edited: Aug 10, 2022 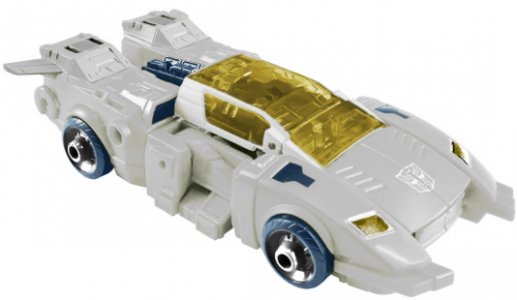 I don't think it's unrecognizable.

Future_Erika said:
There's also a Hot Shot listing
Not 100% confirmed to be armada, but it'd be weird if it wasn't
Click to expand...

I wonder if they'll do Hot shot out of the Elita one mold?

Steevy Maximus said:
No, it was on “the big leak” from last year.
Click to expand...

I'm referring to the recent NEW talk of Armada Blurr that started up with Pointblank's reveal long after Velocitron Blurr's reveal.
S

Sabrblade said:
I'm referring to the recent NEW talk of Armada Blurr that started up with Pointblank's reveal long after Velocitron Blurr's reveal.
Click to expand...

Which is likely a throwback to when the big leak indicated that Velocitron Blurr was seemingly intended to be a remold of Blanker into Armada Blurr Instead of the SS retool we ended up getting.

Now that people have seen Pointblank, it’s like “yeah, I could see them getting an Armada Blurr looking guy from this”.

Clarification: After writing that above, I realized that I didn’t type that as such in my original post. Autocorrect decided it wasn’t cooperating with me at that moment and I missed it. Sorry for the confusion, and I corrected it above.

Citizen
While the transformation "skeleton" could work, we haven't seen as many extensive retools in recent lines, mostly just alternate heads/weapons. Seems to be a different approach to reusing molds as compared to CW/TR/POTP.
E

Haywire said:
IDK, I have an overly nostalgic fondness for the classic Targetmaster partners. This version of Peacemaker would fit in rather well with them.

That said, if Hasbro wanted to release multipacks of the Battlemasters or the Legends Targetmasters in Selects, I would be all for better-articulated versions, too.

I guess what I'm saying is, more Targetmasters is always a win to me?
Click to expand...

I'm shocked that they haven't done that already.

If you all say so. I don't think they're so similar.

I mean, sure, they're at least as close as some of the BotCon toys of the past, but I'd hope that's no longer our standard.

Staff member
Council of Elders
Citizen
They got Cybertron Prime out of an Ultra Magnus. This is a much smaller leap than that.

CoffeeHorse said:
They got Cybertron Prime out of an Ultra Magnus. This is a much smaller leap than that.
Click to expand...

I won't argue further. Certainly I grant that such things are possible (given the desire and resources to make the effort), and never suggested otherwise. This is more about assuming things that not only haven't even been announced yet, but which Hasbro has specifically said they think is beyond what they can do easily. If they say so, I'm not going to second-guess them.

If I'm wrong (perhaps Hasbro was just deflecting?), I'll still happily consider the new Armada Blurr toy whenever it's revealed, and decide whether or not to buy it based on how good a job they did and how much I decide I want that toy.
Last edited: Aug 11, 2022

Citizen
To clarify, when Mark says that he thinks Armada Blurr from Pointblank isn't doable, he's likely talking about the fact that, while we fans would be satisfied with a Blurr that looks like the one quoted below, Hasbro wouldn't be. They'd want to go all the way to make it look like Armada Blurr proper, not just a gray and blue Pointblank wearing Blurr's head. And "going all the way" is what he's probably referring to when he says it isn't doable.

It's a nice color scheme either way.

Sabrblade said:
To clarify, when Mark says that he thinks Armada Blurr from Pointblank isn't doable, he's likely talking about the fact that, while we fans would be satisfied with a Blurr that looks like the one quoted below, Hasbro wouldn't be. They'd want to go all the way to make it look like Armada Blurr proper, not just a gray and blue Pointblank wearing Blurr's head. And "going all the way" is what he's probably referring to when he says it isn't doable.
Click to expand...

Citizen
I think the lack of his "cape" is a problem, but not in the way people are thinking of. Blurr has that because he's a near-total shellformer, with his robot mode made almost entirely out of blue parts that aren't part of his silver vehicle mode, and Pointblank is not. You can put Blurr's colors on Pointblank in either mode and have it be immediately recognizable as Armada Blurr, but the Blurr-decoed Pointblank robot doesn't turn into the Blurr-decoed Pointblank car. Even an alternate "backwards" robot mode would still require his big blue boots to turn into the silver rear third of the car.

I do think a "compromise" deco is possible that would be immediately recognizable as Armada Blurr in both modes, but I also think it would be further outside the lines than Hasbro's been willing to color lately, to say nothing of fan reaction.

Citizen
To put it another way, aside from the very exceptional oddity that is Velocitron Scourge, when's the last time the current Hasbro team gave us a redeco/remold that was just "close enough" (like what BotCon and the TCC used to do) instead of giving the full extra effort to really make the redeco/remold look "proper" and "accurate"?

And, outside of special cases where the redeco/remold is meant to be the character in a new/different bodyform altogether, I mean.
Last edited: Aug 12, 2022

Citizen
Every single one of the Botcon beast homages are garbage color wise.

They’re readily recognizable sure but all of them are inferior to the genuine article.