Thundercats - General Discussion (and some Silverhawks too, whynot)

Citizen
In the case of Lion-O/Zartan links it was mostly color changing in light, for Mumm-Ra/Mon-Starr it was a mix of mode of operation in their respective shows combined with voice actors, and for the in-between, mostly caffeine and Skittles and that time watching Thundercats on Toonami in college when due to background noise messing things up it sounded like Lion-O yelled "UNDERPANTS! HOOOOOOO!!!!"
A

Citizen
This was a really awkward page break.
P

Citizen
Received Better Tygra and Vultureman yesterday. Really loving both! The teams are really coming together (Lunatacks even named dropped on Vultureman's box!) Shame we got the (currently running) pre order for LJN inspired figures.

Citizen
Aside from Transformers, Thundercats are my favorite toy line.

I have all of the Super 7 3.75 Reaction line, but I'm keeping them carded except for a few extra ones that didn't come out in the 2011 line. That series, I have to say was fantastic and Bandai really knocked the figures out of the park. Hate we didn't get a season two. Not sure we'll see any more from the reaction line, but was hoping for the Lunataks and some pirates. They really missed the boat on not doing a spirit Jaga version. I made a custom 2011 inspired Bengali and working on Pumyra currently. Waiting to get a few more accessories from Vitruvian Armory, but she's coming along!

Citizen
Almost forgot one of my grails. This 2011 Slithe was absolutely one of the hardest things to acquire I've ever hunted down. I have one in-pack and one out.
Every now and then, there's one that pops up on ebay. There's actually one on Ebay currently, but once someone snags it, there'll be a dry spell for a while. I had to buy my in-package one from a seller in the UK. Neither were cheap.

The Sword of Omens, is all metal and stainless steel and the Eye of Thundera lights up, but I'm thinking of replacing it with a custom magnifying glass made to look like the closed eye. I really just got it for the HO's.

Citizen
Neither of those looks like they could be obtained inexpensively at all...

I only still have the one Thundercats toy (glow Mumm-ra), I considered frozen-to-death Lion-O but for budget reasons I had to let it go.

Still hoping for a decent coffin at some point, for now I'm recycling. 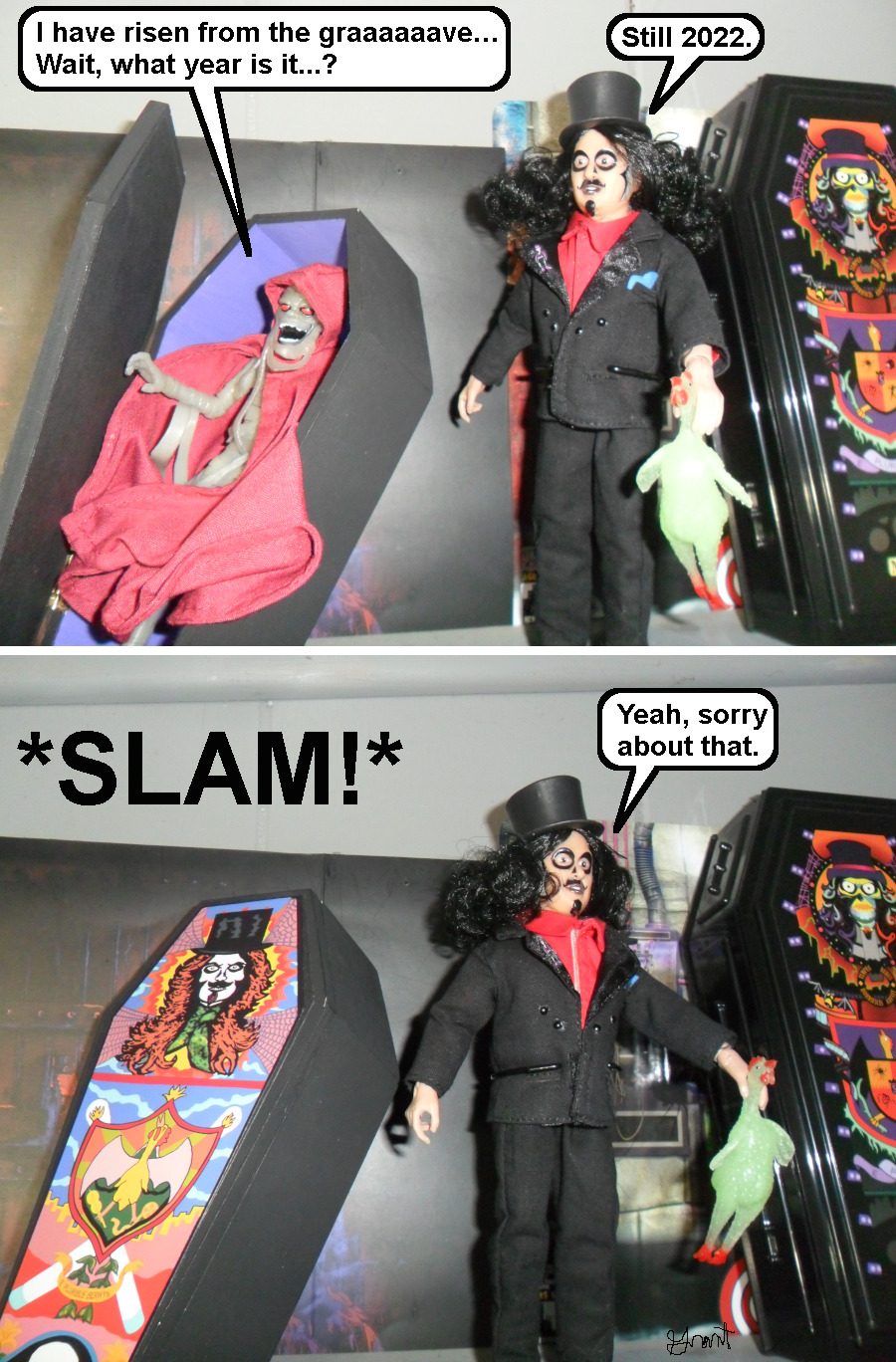 Citizen
Here's my progress so far on Pumyra. Working on her actual weapons now. I'm kind of digging the open midriff instead of her traditional setup. Going to do a necklace with the 'cats logo instead of trying to work it into the costume somewhere.

Also, waiting on the parts to arrive for Lynx-O. He should turn out pretty well. Quick question; What color skin tone would be best for his arms/face? I'm thinking a pale peach, but wanted to get some opinions here...

Citizen
Honestly thats a better looking face on her than Mattel or Super7 gave us.

Confuzor said:
Honestly thats a better looking face on her than Mattel or Super7 gave us.
Click to expand...

Yeah. Its from Fantastic 3D Customs. The guy does an amazing job. I orderrd an unpainted Panthro head that I'm going to do a little work on to make Lynx-O.
Also have a Quicksilver and Knull head coming as well.
Figured I'd get a chrome buck and make him while Boss Fight still had them.

Citizen
Got my black, red and sandstone buck pieces in from Vitruvian Armory. Here's Lynx-O so far... 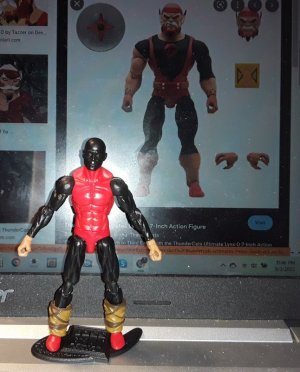 Citizen
While I'm waiting on the head for Lynx-O to arrive, I'm going to start Vultureman. I need some help with the colors though. I'm using a ReAction Monkian for the buck, but wondering if Monkian's flesh toned arms and legs are close enough to use as is. I haven't seen the S7 Ultimates line in person, but it's looking more like a light beige color than Monkian's peachish tone.
Normally, I try to use as little paint as possible to enhance posability without paint chipping, but with a 5 point figure, that's not so much the issue as keeping it looking as professional as possible. I have all the parts to make him, but just want to get some color suggestions. Also, I'm thinking of doing a mashup between the G1 version of Vultureman and the 2011 Vultaire just incase I get lucky and S7 does an actual ReAction Vultureman then I can have two distinct Vulturemen.
Thoughts?
Last edited: Sep 13, 2022

Citizen
Here. I got em side by side here. 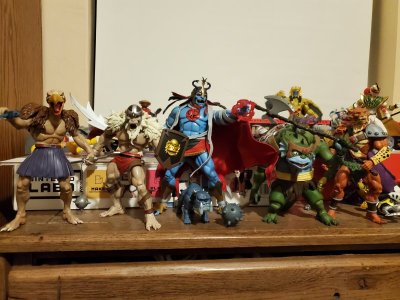 Citizen
Awesome. Thanks! I never noticed he was darker than Monkian. The show art makes him look lighter.
The Reaction Monkian is darker than his Ultimates version, but still off....
Going to look at Hobby Lobby tomorrow and see what I can find in the way of acrylic spray paint.

Kalidor said:
To this day I haven't watched the entire series. There was a certain point in the rotation where they just kept rerunning season 1 over and over again and never played later seasons except maybe once. The latest episode I remember seeing was the one with the lady Mumm Ra and even that one was a one off of anything from that era.
Click to expand...

Yeah, I don't remember seeing all the episodes when I was a kid either. I remember the "ThunderCats Ho! The Movie" that intoduced the 3 new ThunderCats, and I remember the Lunataks, but that's it. I feel like the local Fox affliiate just stopped carrying the show around then.
It wasn't until the early 2000's when I fist discovered downloading stuff, I found out about the later episodes where Thundera re-forms and they go back.
Now I have all the box sets and have seen them all. To this day there's a clear point when the episodes I have no memory of start. It's about mid-way through season 2.

Caldwin said:
And nothing of value was lost.

Honestly, toys are all well and good. I'd be more likely to buy a few if I could find them in the wild instead of having to buy them online.

But what I'd really like to see is an actual show, like, not the Roar/Titans GO kids version, but an actual Thundercats show.
Click to expand...

This. Just, all of this.

I really have no desire for the Super7 figures. I've heard too many bad reviews about them, and the company in general, to want to go down that particular rabbit hole.
I actually just completed my collection of all the vintage action figures, finally acquiring Captain Cracker (just waiting on a repro sword for him), and getting the last vintage accessories for Lion-O and Grune.
I also have quite a few SilverHawks. I'm just missing 4 Hawks and one bad guy. I'll post some pics later.

Confuzor said:
Here. I got em side by side here.
View attachment 9354
Click to expand...

Has Rita been up to her old tricks again, or did the evil Tommy Oilver break the bounderies between reailties and join forces with the Mutants and Mummra?

Superomegaprime said:
Has Rita been up to her old tricks again, or did the evil Tommy Oilver break the bounderies between reailties and join forces with the Mutants and Mummra?
Click to expand...

It WAS my Lightning Collection display, but its slowly being taken over by the Thundercats. Once the tank come out the transition will be official.

Citizen
Tomorrow's payday, so I felt like doing this. 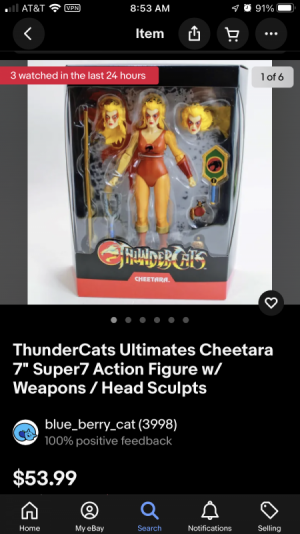 It feels like it's been a while since I've gotten anything Thundercats related. It felt right to get another Cheetara.

Confuzor said:
It WAS my Lightning Collection display, but its slowly being taken over by the Thundercats. Once the tank come out the transition will be official.
Click to expand...

If the evil Tommy remains in play, you know that a unholy allience has been struck, or is the Lord of the Thundercats going to use the Sword of Omens to vanish him back to his reailty?

Citizen
My progress so far, on Vultaire. First coat. Going to apply a second coat, seal it and implant a ruby in his necklace.
Going to go ahead and also make a cartoon version with different feet and no fur around the neck. 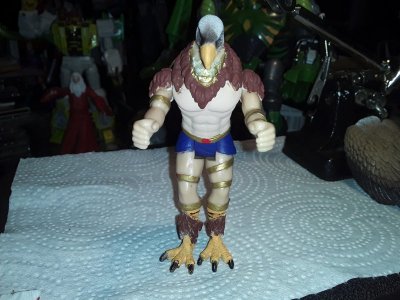 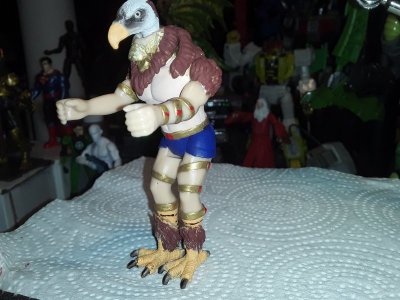 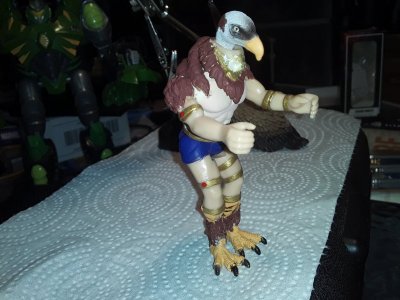 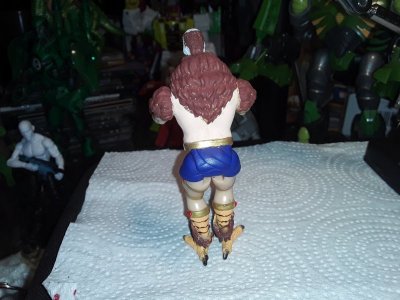