The US Supreme Court and its decisions

Citizen
Hell with it, let's just burn the capital to the ground and install her as dictator.

Citizen
This is much larger than women's rights. To enforce this, all medical records must be turned over to the executive branch. Now the government will know everyone's medical history. And now there is precedent that matters of health can be legislated. We have just witnessed the government exception to HIPA. I wonder how the establishment will use this...

This impacts ALL people, not just women.

Citizen
Not the federal executive branch, STATE governments, which might be even worse, given that the governors of certain states are borderline fascist. There's no federal abortion ban after all(at least not YET). Question is would medical records from state A that supports abortion rights have to be handed over to state B which does not? Interstate lawsuits and criminal cases are gonna get rather dicey due to this ruling, I fear.

Citizen
The Democratic Party seems to have decided to emulate how Labour handled Brexit.

The leadership of the Democratic Party's understanding of the Republican Party and the political situation there-in is based on an insititution and political philosophy which no longer exists.

Citizen
Yeah, but it's not like Biden has been in hypersleep that whole time. Or is asleep right now. Just because he can remember a time when people who called themselves Republicans could be decent human beings shouldn't make him incapable of observing the outright villainy they're committing now.

Hell, in anything he benefits more from seeing their current behavior in context. He was alive to watch the majority of Nixon's own party condemn Watergate and recommend impeachment, and then saw in contrast all of two Republicans condemn Trump for trying to stage an outright coup, and somehow he still thinks the rest can be trusted.

And that's before taking into account his own refusal to even talk about the coup, much less do anything about it. He'll get on the news and say "For God's sake, do something" over a school shooting but a lynch mob storming the Capitol doesn't even deserve a mention. It's a wonder the internet isn't flooded with conspiracy theories that he's in on it somehow.
Last edited: Jun 26, 2022

Pocket said:
Yeah, but it's not like Biden has been in hypersleep that whole time.
Click to expand...

We sure about that? The man continues to consider McConnell a "close, personal friend".
This isn't me dunking on Biden either - he's a hell of a lot better than the previous lunatic - but he's got a very noticeable blind spot when it comes to the intentions of the Republicult. Reasonably certain if they started wearing armbands to identify themselves he'd be complimenting them on the color.

Ryougabot said:
This is much larger than women's rights. To enforce this, all medical records must be turned over to the executive branch. Now the government will know everyone's medical history. And now there is precedent that matters of health can be legislated. We have just witnessed the government exception to HIPA. I wonder how the establishment will use this...

This impacts ALL people, not just women.
Click to expand...


https://twitter.com/i/web/status/1239292276536459271
https://twitter.com/i/web/status/1258869576575651841
THAT'S why everyone's been warning about period trackers and the like. You can also get a lot of info from shopping records - which is why I've also seen reccommendations to buy tampons etc with cash only now. HIPAA does not have the weight or carry the protections most people seem to think it does.

Citizen
People should’ve assumed Biden pretty much checked out on accountability when his state of the Union speech wasn’t *entirely* “these dangerous fascists tried to destroy our country and install a Dictator. These are the people responsible and how they’re being punished.”

Citizen
Biden always was going to be a "Custodial" Presidency. Man's decision to get us out of Afghanistan despite the backlash was done because he always intended to be a single term President. He never wanted the job in the first place.
T

wonko the sane? said:
If the US pulled it off, then the political monsters of the world even in "well established" democracies will attempt to emulate it. Hell, they're taking about abortion rights up here in canada, it wasn't even a question till recently.
Click to expand...

It's still not, really, IMO. Even the most conservative leaders of the Conservative Party we've ever had haven't been inclined to even allow in-party debate of the subject. Yes, there are Conservative MPs who'd try to re-open the issue if it were allowed (hell, I'd wager there are Liberal politicians who are personally against it considering how many Catholics are among their ranks), but the party leaders have kept them in check. Canadian Conservatives also aren't nearly so relentless or devoted enough to accomplish what the Republicans did. I'd compare what happened last week to The Doctor's chipping away at the diamond wall in 'Heaven Sent'... this is the result of 5 decades of relentlesss, concentrated effort by some of the most diabolical, single-minded and devoted politicians who've ever lived. Since the ruling first came down they haven't stopped in their attempts to attack and undermine it. The patience and planning they've exhibited are almost scary.

Canadian conservatives have neither the devotion to the issue, the inclination, nor the mechanisms at their disposal to pull off any of it. I may not like their stance on social issues, but I also trust that Canadian conservatives (at least as they exist today) don't engage in the same kind of tactics we see Republicans have perfected down south (gerrymandering, vote supression laws, etc.). Most Conservative MPs are still rational human beings (with the exception of some who originally came from the Reform/Alliance ranks), and as such they're well aware that there is very little appetite in Canada for social Conservatism. Do we want our governments to be more financially literate and competent than Prince Justin and his menagerie of assclowns? Absolutely. But we're not willing to vote in social Conservatives to get it.

They're only talking about it now because it seems like Canada desperately needs to imitate every crisis America goes through, even if makes no sense. Kind of ironic, considering how so many Canadians define their whole national identity in terms of how not American they are (or how much they can be seen to look down on America), meanwhile they're unnecessarily aping every social crisis and the full blown culture war happening south of the border.

Citizen
Here in New Zealand, everyone has roundly expressed disapproval at the whole stripping of rights in the US, even the right wing party which largely voted against the decriminalization of abortion when it came up a couple of years ago.

Except one right wing MP who posted a message of support on Facebook and was told off by the party leader, who then went on TV to stress that abortion would not be banned if he was Prime Minister.

Citizen
Canadian tories ape american culture war talking points because they've also aped their policy platforms. That is to say: they literally have nothing else.

Citizen
Don’t get too complacent with “it can’t/won’t happen in my country” takes. I mean, a decade ago Brexit would’ve been unthinkable, and only a vague goal of the far right of the Conservative party, far left of the Labour Party, transport unions and a fringe far right party which never has had a sitting MP. In these dark times, fringe extremist policies can become enacted reality.

Citizen
This Supreme Court has no claim to legitimacy. It's a rogue court, packed with liars and Federalist Society cucks. They know no shame, give no *****. All they care about is pushing their particular twisted world view. Watch Thomas act shocked when Alito goes after his marriage as well.

But that's the Supreme Court in a nutshell.

The history of SCOTUS has always been one bad decision after another till a massive societal shift forces them to change against their wishes. Look at Dredd Scott and numerous other decisions. SCOTUS has almost always been on the wrong side of history until it's been dragged, kicking and screaming, into just past the rubicon and forced to reverse previous decisions.

Citizen
https://twitter.com/i/web/status/1541421622766215172
Under the "Nor restrict the practice thereof" part of the religious law prohibitions statement. Which means malicious compliance time - does the Satanic Temple have any prayers that teachers could use?

Citizen
Frankly: using literally any non-christian prayer would be malicious compliance. And there's more a litany of options to chose from.

Citizen
Gonna quote a Facebook friend who lives in GB.

"American politics has a habit of infecting the rest of the world like a cancer. So the decisions made yesterday have implications for all women.

I sincerely hope no woman has to face the difficult choice of whether to terminate. But making it a criminal act for RELIGIOUS REASONS goes against everything America stands for.

Any western leader who does not condemn this goes down in my view. There is no place for religious views In secular law or politics. End of story.

And it DID, until the religious decided that they were oppressed until they were forcing everyone to worship the way they do.

Dekafox said:
https://twitter.com/i/web/status/1541421622766215172
Under the "Nor restrict the practice thereof" part of the religious law prohibitions statement. Which means malicious compliance time - does the Satanic Temple have any prayers that teachers could use?
Click to expand...

They say that what a school football coach does at the 50 yard line after a game is "private speech"....
immediately after saying that a medical procedure isn't protected by privacy... 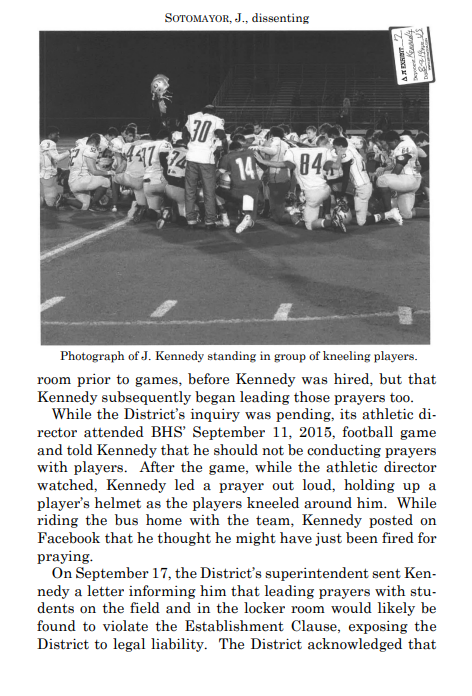