Citizen
Have a new Godzilla short!
And if you're wondering about the title...

Citizen
That new Godzilla vs Hedorah short is pretty dope. Wish we could get a full-length movie in that spirit!

And Godzilla Vs Barkley resulted in one of the better one-shot comics in Dark Horse's run.

Citizen
Forgot to post this last week, but at a Target in Champagne Illinois, I found Playmates Toys figures of Classic Gorosaurus and '50s' Rodan. They arent listed on the Playmates website yet, but the cross sell on the back of the box includes Jet Jaguar and Burning Godzilla, so the classic series seems to be continuing, anyway.

Hoping they do a Godzooky figure some time, and Anguirus, Mechanikong and Gojirin, too! 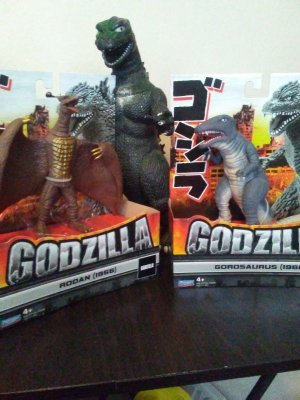 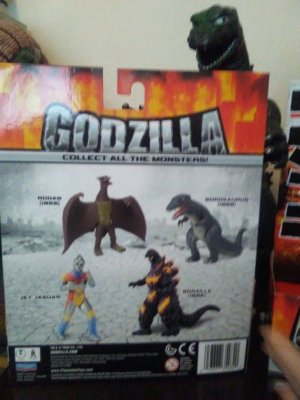 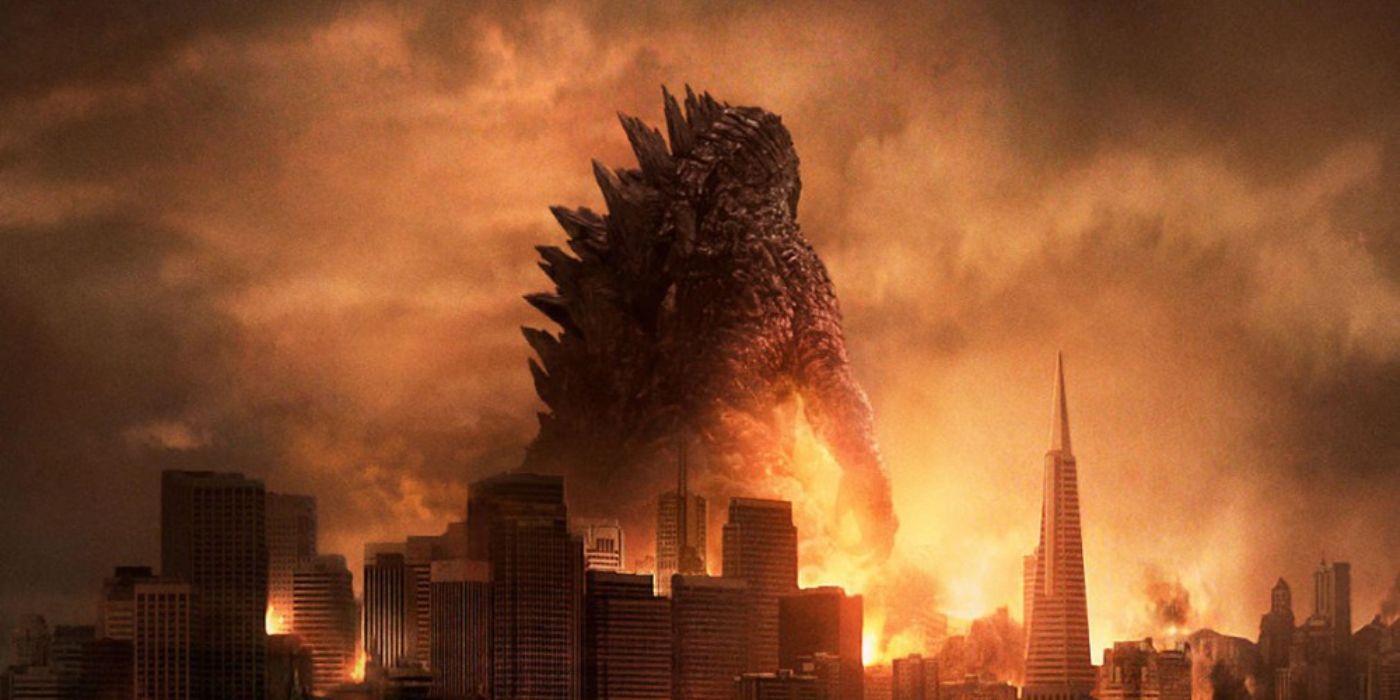 Hourglass! It feels a little late to do something like this, but better late than never, I guess.
M

Citizen
I can’t believe it’s going to end up on ApplTv. Super excited about this.

Citizen
Until it comes out on physical media, dvd or Blu ray, I’m out. Don’t know anyone I can borrow appltv from...

Citizen
Well this sucks. If you backed the Pacific Rim miniature game kickstarter, they’ve been forced to cancel wave three due to the rising costs of everything. They’ll issue partial refunds for those, like me, who went all in.

Man this blows. I never got a real chance to play wave 1 because I broke my elbow the week it arrived, or wave 2 because of Corona.
P

Citizen
I didn't know we HAD a kaiju thread...I have a little model city shelf I use to wreck stuff:

It's a homage to something. Really, look it up. 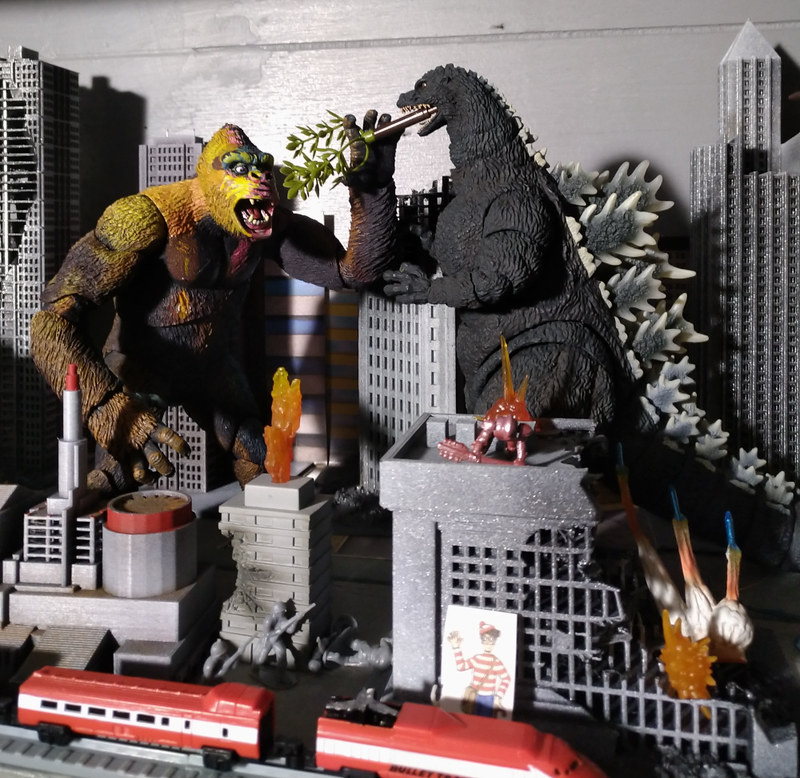 If people expected me to take this seriously they shouldn't have ever made the toys about the right size... 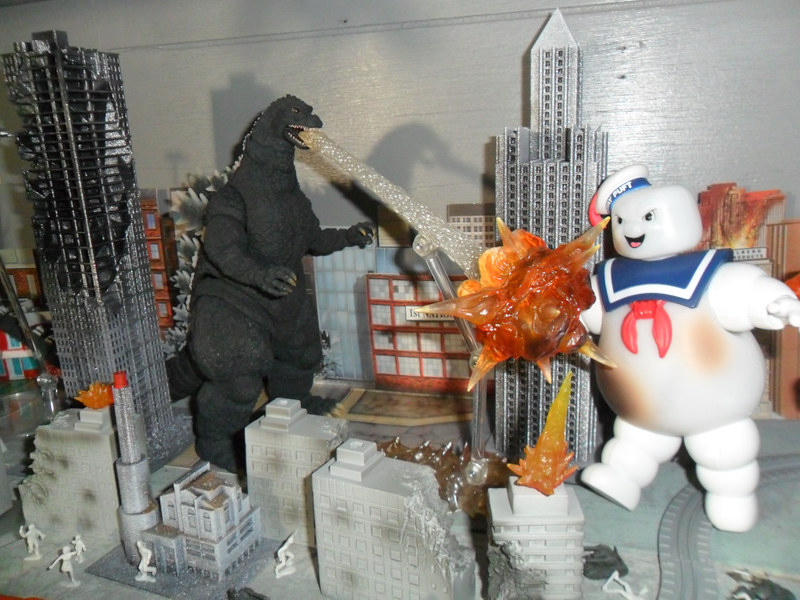 He was made of snow but the children know that his life ended in pain... 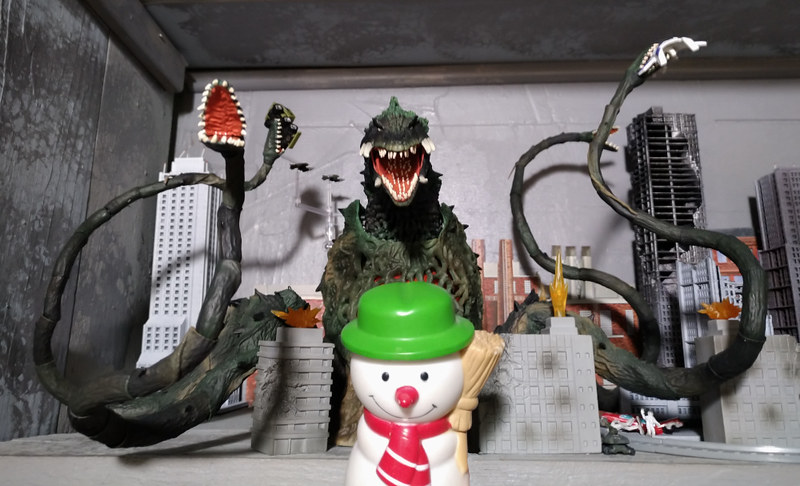 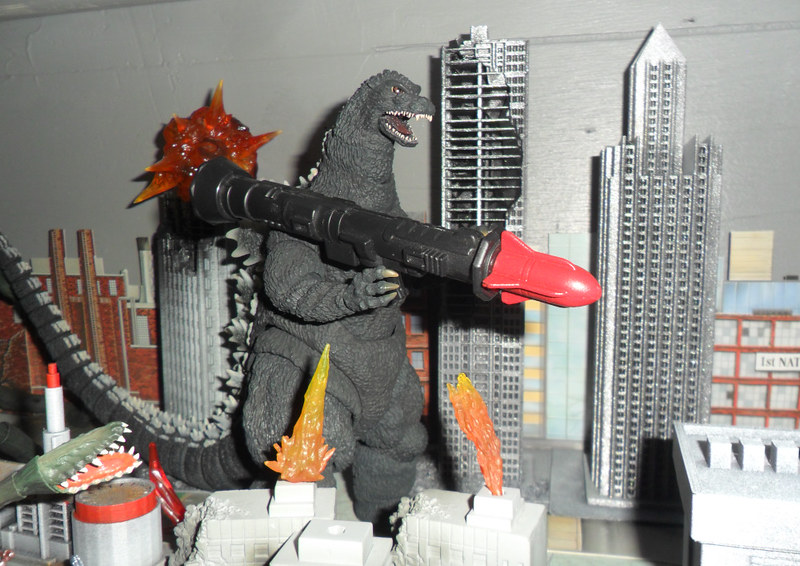 Waldo's body was never found. All they found of Woof was his tail. 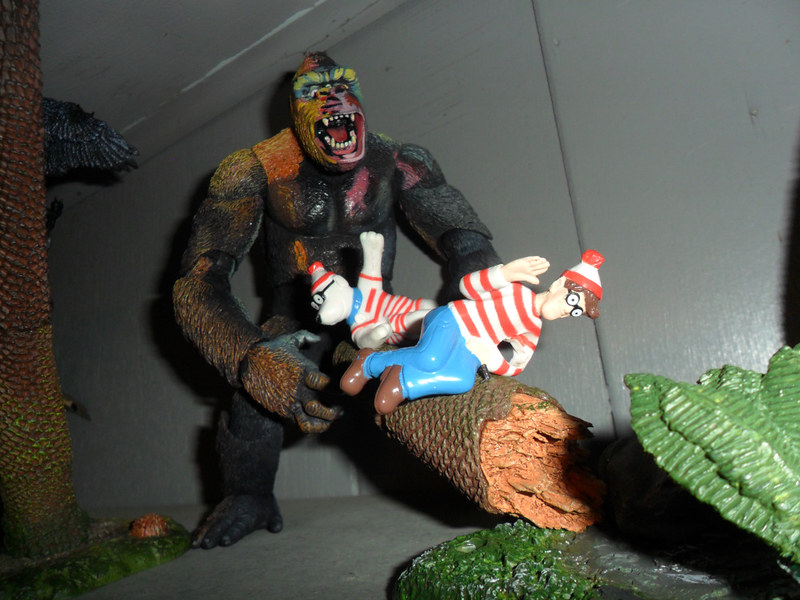 Citizen
I am jealous of both your cityscape, and your Biollante figure!
...shouldn’t the more Dakka picture have a quote about “all this intravenous stuff’s no good for you. Stick to Smoking!”?
P

Citizen
Well, it would, but anyone who stepped outside for a smoke break that day was incinerated. On the bright side, the cancer rate WAS down quite a bit...

My city is a mix of recycled parts, Eyepop designs buildings, and random stuff. Monsters can be anything from vinyls to Monsterarts to a pencil topper or a Snoopy I stuck on a stand.

I will readily admit this follows the same rule as my Transformers collection, which is to say "Whatever I happend to feel like", there's no sorting by movie or series. I do plan to add a Ghidorah and a Hedorah at some point this year.

Citizen
I have a few of the Neca figures, but my Kaiju collection mostly has to pass the ‘can a 3 year old play with it?’ test. Ghidorah and Rodan are 2 of his favorites!

For me, I’d like to get a Trendmasters Spacegodzilla, as I like the colors on it better than the later ones, and a good Biollante, either one like yours, or the Trendmasters version. And Anguirus. One can never have too many Anguirus.
P

Citizen
I admit I think MonsterArts are overpriced, all the ones I have were either paid for with Ebay or clearance bin finds at B&N. Biollante weirdly got paid for by a Comic Con Explosion con-exclusive I got cheap, then sold to someone years later who clearly thought more highly of 'yellow painted orange' than I did. I haven't regretted the swap-out. I do have the NECA Reactor-glow one, a yard sale box find loose. I use it in place of any 'burning' Godzilla as it actually glows in the dark. I've been disappointed that no burning-color one ever actually glows.

That being said, I did have some trouble because very few of my Godzilla toys were sturdy enough to smash head-first through a Jenga tower. My nephew loaned me one of his rubber ones to put with the Jenga so that embarrassing glitch won't happen again.

Citizen
Probably one of my luckiest finds is the big Imperial Godzilla (in the pics above with Rodan and Gorosaurus) at a flea market. It is the 3-year-old's favorite, and incredibly sturdy. I just have to avoid checking ebay prices when hes smashing it around, and taking it on car rides to strange places. He has fun with it, and thats the most important thing!
P

Citizen
Who cares? If a toy is damaged being played with by a kid, that's 'in the line of duty'! When my nephew, who lives next door to me, was born I had several look at the robot collection and say 'you're going to have to be really careful that he doesn't get into the collectibles!'. I said that if a toy robot collection and a little boy are right next to each other, and they don't expect them to collide, they're delusional. The same goes for monsters! Yes, he has broken a few things I was not happy about, but that's also part of the learning experiance for him. A plastic item can be glued, a kid has to be grown!
P

Citizen
Special Color King Ghidorah is now out. Super top-heavy, I gave him a 'safety line' to avoid shelf-dives. 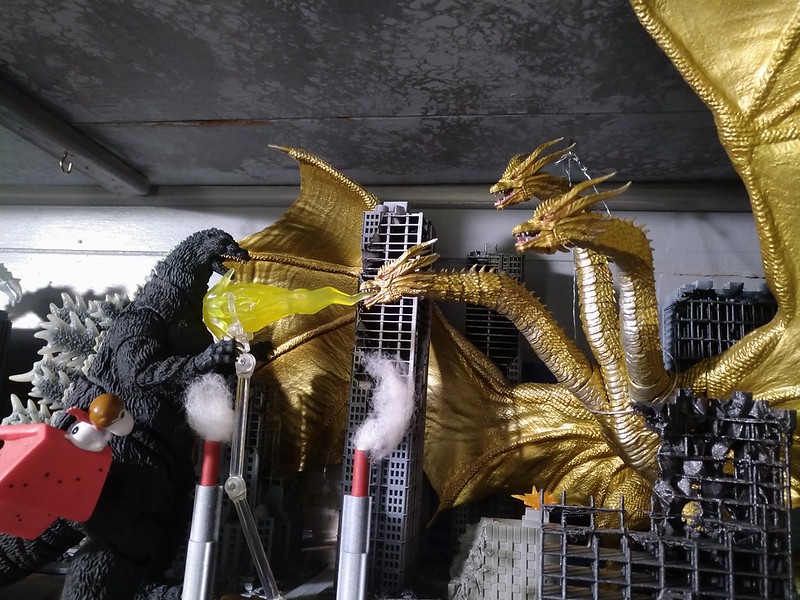 Citizen
dunno if this is a hot take or not, but kotm/monsterverse ghidorah is the best ghidorah ever honestly. he's everything that made ghidorah the iconic godzilla bad guy in the showa era, but without the villain decay he went through as the showa era progressed. he's bigger and badder than every and he's ******* scary in a way ghidorah's never really been before imo. like, if it weren't for godzilla and mothra to beat his ass, KOTM would have been a straight-up horror/disaster movie instead of a kickass monster battle movie.

the idea of a giant monster is scary enough, but a giant monster who wants to horribly murder you and everything else on the entire planet for his own sick amusement and ******* smirks before annihilating a bunch of helpless humans makes him even more terrifying.

i really love how they give readable expressions to the kaiju in the monsterverse. like it's relatively easy with kong but giving facial expressions to reptiles and a giant bug is really tough, and they pulled it off

Citizen
I'm not sure I'm sold on the whole 'Alpha Titan' thing in KotM, if for no other reason than it made Rodan serve as Ghidorah's toady for most of the movie. He should have been right there alongside Godzilla and Mothra taking down Ghidorah in the final battle. But, yeah, KotM Ghidorah definitely has a threat level finally on par with the character's reputation as a Big Bad.
P

Citizen
I am split on my favorite characters for any franchise, Godzilla especially as there has been so MUCH variation. The Monsterverse style King Ghidorah is definitely my favorite version of that character. On the toy side, despite stability and posing being such a pain due to weight and size, this new one is most defiitely an improvement on my old one (and that's the SAME Godzilla in this pic, so you can see the vast difference in the Ghidorah I replaced). I plan to keep it as my main one, same as I settled on the Godzilla that plays music when you poke his fin (I know, weird, but it really is a nice one, that's the one in BOTH my King Ghidorah pics). This saves me constantly chasing something new, too, when I finally find something I'm actually happy with. My old attempt was a bit lacking: 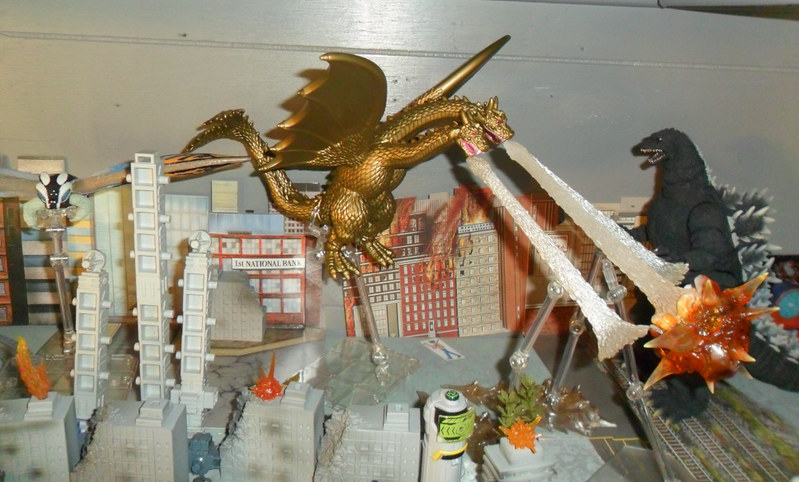 Citizen
A little late to the party, but if there are any fans of the Hanna Barbera Godzilla series, the official Godzilla channel on YouTube has been posting episodes in 3 parts. They have all/almost all of season 1 up, and they are starting on season 2. The last part of the first episode, Calico Clones, should drop on Monday night.
You must log in or register to reply here.
Share:
Facebook Twitter Reddit Pinterest Tumblr WhatsApp Email Share Link
Top Bottom