The Book of Boba Fett

Daith said:
I mean I loved the Legends pull about the witches of Dathomir riding them. And if I can get Danny Trejo training Boba Fett how to ride a a Rancor around Tatooine like a boss I’d be down for that.

But man HasLab really screwed up with that timing and everything even more now.
There’s going to be two Rancor Keepers people want now.
Click to expand...

I freaking lost my mind when they mentioned the Witches! I was thinking about them and how cool it would be to bring that back into Canon! Woot!

Pale Rider said:
Not necessarily. His adopted tribe may be gone, but he may still be savvy enough with their ways to get the others on his side for a big showdown.

Besides, I get the feeling that he's going through all of this as a way of atoning to the sand people. Why else stay on Tatooine?
Click to expand...

Oh he is definitely getting vengeance for them.

Citizen
So was his whole tribe wiped out, as there were dozens of f them at points and we saw like five dead after the wrecked camp?

Powered Convoy said:
So was his whole tribe wiped out, as there were dozens of f them at points and we saw like five dead after the wrecked camp?
Click to expand...

Oh they must assuredly were wiped out.

Citizen
I have this picture of Fett in my head, from the pre-AotC EU: taciturn, professional, exceptionally dangerous, but overly paranoid and dangerously prone to overconfidence (and this is from before all the Karen Traviss bullshit, but that was all in the same vein, only taken up to 9000 and without the weaknesses). This Boba Fett... is none of those things, and it just feels so werid. And I don't quite get it. Like, I don't want to see him 360 noscoping his way through the series, that'd be boring, but he's just this... nobody. He just floats around from encounter to encounter not actually doing anything to resolve his problems. He's like a character in an RPG, only he spends so long wandering around talking to everyone his quests all timeout before he can resolve them.

As for the 'biker' gang... Transhumanism is something interesting that Star Wars hasn't really ever tackled outside of a couple of examples, and even then, it's always been 'bad' transhumanism: Vader and Grievious being the obvious from the films, and Ton Phannan from the X-Wing books, he was a pilot who was allergic to bacta, so any sort of serious injury meant that he had to get cybernetics instead of being healed, his was a sad story. But there's never really been someone who chose to be like that (other than Lobot, whose whole character throughout the EU is 'Lando's assistant'), so it was interesting to see. I hope they get, ahem, fleshed out more in the last few episodes, but given my complaint about the title character, I'm not hopeful.

I think the bikes were a bit of a mistake; they were too clean, too shiny. Star Wars is very much of the 'well used' design school, especially on places like Tatooine. 'Shiny' in Star Wars basically means 'rich and powerful'. They were too nice for to be owned by people who are shunned for their implants and are so poor that they have to steal water.

The Predaking said:
Oh they must assuredly were wiped out.
Click to expand...

Could have simply been the clan he was with. It's possible other clans within the tribe survived. 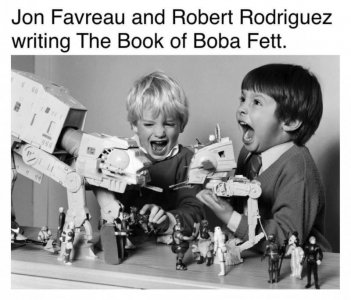 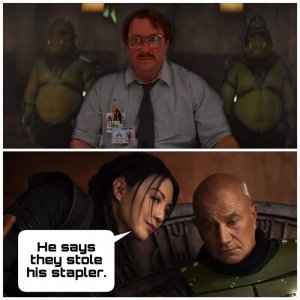 Citizen
Just finally got to watch ep 3. I liked it.

I was sorry to see the Tuskens go. They were fun and I would have liked to see that warrior lady Tusken kick more ass. Hope she gets a figure. I was expecting that sort of fate for them honestly so while I was sad I wasn't surprised.

The rest of the modern episode was cool too. Including the punks and their bikes. Star Wars has lots of 1950s aesthetic in it cause George loves that stuff. Those bikes were extremely Attack of the Clones.

Really my only complaint was that the bike chase just a bit felt to slow to me cinematography wise. It should have felt more quick and speedy. Other than that I enjoyed it all though.

-ZacWilliam, looking forward to what's next. And damn I want Black figures of a bunch of folks from this show.

Staff member
Council of Elders
Citizen
Yeah, I didn't mind the chase scene as much as everyone else did. Although I wonder why none of the speeder gang had a blaster. It would have come in real handy in both the chase and the fight scene.


Donocropolis said:
with a crew of 1 buddy and a robot (and now 4 Mod Squad teens),
Click to expand...

Staff member
Council of Elders
Citizen
I like the show overall and I'm interested in seeing where it's going. But the hover round gang really jolted me out of the show and it felt like something you'd see satirized in Naked Gun rather than something that actually had any compelling weight in the tone of the series. Not the biggest misstep, but a misstep none the less.

Staff member
Council of Elders
Citizen
The whole waving people out of the way did reek of Naked Gun.....

Staff member
Council of Elders
Citizen
that would be awesome!

Citizen
The witches of Dathomir have been in the canon for a while now, via the animated shows.

Dvandom said:
The witches of Dathomir have been in the canon for a while now, via the animated shows.
Click to expand...

Technically, those are the Nighsisters, and TCW and Fallen Order confirm that they were all but exterminated by the Separatists and then the Emperor's hunters.

Of course, planets (despite what Star Wars writers usually think) are large, and the (near-)elimination of the Nightsisters may just open up the field for the Rancor-riding Witches to rise to prominence.

Dvandom said:
The witches of Dathomir have been in the canon for a while now, via the animated shows.

True, the nightsisters have been in the canon since Clone Wars, but the Witches were always something different to me. I am hoping that they are different things in new canon.

Citizen
Today's episode was quite good like the second episode.