The Best Thing About HeroQuest is….

Citizen
That the Mythic Tier HasLab Backers are still getting the Dragon Miniature and accompanying quest book! Despite falling short during the campaign I guess they just didn’t want to waste the development of it and try for a later release.

I am hyped to have a new version in hand soon!

And that classic video just for fun!

Citizen
I just saw that e-mail. Was a really great bit of news! I was really disappointed that the campaign fell just a bit short, so this was a very pleasant surprise.

Also, just saw a tweet from Zargon implying the one other stretch goal that the campaign didn't reach (an extra gargoyle) might be added in as well.

Citizen
I think its great theyre adding joes expansion. So happy to get the dragon! And i hope they do toss in at least the gargoyle. It was so close that they may as well.

Cant wait for this to finally ship. I wonder how many he-man and conans people will do for the barbarian lol and red sonjas for the female version

Did anyone else do the survey they had for a possible app?

Citizen
Yes. Why it had an NDA on it when the video they posted about it blabbed about it anyways made no sense.

Citizen
They probably had the NDA so they could blab about it.

Citizen
It came out alongside the video though?!

Still I'm glad we are getting most of the content, if not all, that the Haslab campaign showed off. I just figured they would of saved it for a later date and sold it separately. But then again it's just one Plastic figurine, a quest book and some tiles to print out. It probably would of been a tougher sale to make to the public without adding more figurines. And if they toss in the extra Gargoyle that would be even cooler.

Though thinking about it with still having the classic board myself I could do some fun double length/ Multi Floor dungeons on my own.

Citizen
hheeeeeeeeeyyy! i just remembered today is the last day to update the shipping address. that means itll be shipping soon!

Citizen
I'd love to see what a non-GW version of Space Crusade might look like, but I have a feeling that'd be a harder sell, for a number of reasons.
E

Citizen
There's supposed to be an update on this during Pulse Con, during the Avalon Hill panel on Saturday at 12:10 EDT. What I'm hoping for:

Citizen
well that was a bit disappointing. nothing new revealed. said we would be getting it very very soon so thats probly the biggest thing. still on track to ship soon. still working on the app. didnt say how far along they were with it. the girl said we were getting all the bonus tiers, but she didnt say "that were unlocked". just said "all". guess we will have to wait until the first person gets it to see if we get the gargoyle

and for what its worth, they apologized about the lack of updates

Citizen
Twas heartening to know there is a future, but worrysome to leave it unknown.
E

Citizen
So there was a hidden update in the presentation. Notice how the one guy made a big to-do about "keeping it chill" when he was asked about game development? And how all the other panelists reacted to it? That was definitely a hint. If you then watch during the Risk Shadow Forces segment, you might see this: 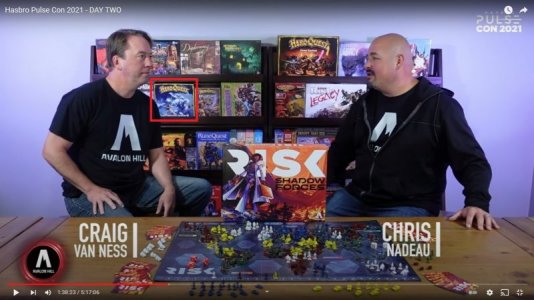 That box on the left that I call out in red is a new version of The Frozen Horror, the third expansion released in the US. Like the Kellar's Keep right next to it, this is a new box with very similar art, not the original Barbarian Quest Pack box.

So yeah, they might not have been allowed to talk about it yet, but they basically confirmed an additional expansion is in development. I'm guessing The Mage of the Mirror won't be far behind. I'm especially interested because I never learned about the additional expansions until just very recently, after the Haslab campaign. Never saw them in stores around here. So these would be all-new content for me.

Citizen
I’d wondered if there was something hiding back there. But I got a bit sentimental about them making a new Risk Legacy and was spacing a bit. It was the last board game I got my dad before he passed away last year. Never got to play it with him though.

The Elf and the Barbarian's quest packs were mail order only. Back in the day, my family missed out on ordering them by like a month or two. We didn't notice the mail order form in either our core game or one of the quest packs till too late. It's also why people on ebay want like a thousand bucks for each one. So I really REALLY hope they are able to make re-releases of them, because I've wanted them for years, but oddly enough I don't have thousands of dollars set aside to buy board game expansions. >_<
E

Citizen
I guess that explains why I never saw them in stores. If they were mentioned in the materials for either the base game or the expansions, I'm surprised I never saw them, since I had all three.

I don't think I've ever seen anyone refer to Kellar's Keep or RotWL as Dwarf and Wizard quest packs. I understand the Barbarian and Elf packs were so named because they were specifically tailored to those characters, including female player miniatures and solo quests. Was the idea of the two main expansions being tied to the other two characters something decided by fans after the fact or something?

Exatron said:
Kinda like I still wonder what happened to my original Fort Max's head...
Click to expand...

he is in an attic somewhere playing heroquest

Citizen
Everytime I see someone talking about them online, I've always seen Kellar's Keep referred to as the Dwarf Quest pack because Keller's Keep is a dwarven made. At least as memory serves. The quests refer to dwarfs a lot.

And I believe the RoTWL is the Wizard Quest because the Witch Lord is a powerful sorcerer. Also with them as the Wizard and Dwarf Quests, that gives reason to why the other two were called the Elf and Barbarian Quests.

Those aren't even all of them. The UK got a few more. Like "Against the Ogre Hoard"
E

Citizen
Yeah, I'm aware of the European expansions, but I'm not any more familiar with them than the US-exclusive expansions. I'm really just familiar with the two that were available everywhere. Would be nice if those could get revisited too.

Citizen
The Best thing about Hero Quest right now is they are getting ready to ship out the Mythic Tier backers according to this electronic mail I just received.

They say that we may be seeing labels printing soon but may not see movement quickly and to wait for a shipping confirmation email before panicking that Zargon has locked our beloved board games away from us forever.