Tales of the Jedi - streaming on Disney+


For better or for worse, this recycled trademark is unrelated to the 1993-1998 Dark Horse Comics series about the Great Hyperspace War and the Great Sith War.

Awesome, except Wraith didn't exist until after Bacta Wars, the last Rogue novel....yeah I know, I'm being picky, oh wait nevermind....WrAth, not WrAIth, forget I said anything

And also Ahsoka, who's neat but already in everything already. Although I think this might be the first on-screen depiction of a "normal" Jedi recruitment, yeah?

Citizen
Super excited for this.

Citizen
Between this and Andor, I'm a happy Star Wars fan again!
(Andor turned out to be a nice palate cleanser before diving back to more popular characters)


Baby Ahsoka ep was a letdown. Was hoping to see how the Jedi recruiting process normally goes, but all we got was Kratos teaching his son to kill a deer (admittedly not something I expected in a kids cartoon) and Maggie Simpson befriending bears. Meh.

Also the "deer" was a kybuck. OH NO 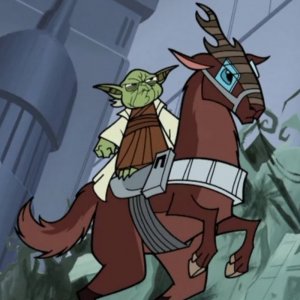 Dooku's episodes were amazing, but man I really wish it wasn't so compressed. The shorts work with Ahsoka because we already know her so well, but Dooku is such a huge unknown despite all the screentime he's gotten that this abridged series feels cruel. Gimmie a full season of Dooku and Qui-Gon traversing a corrupt galaxy, the Master becoming disillusioned with the entire Republic while the Padawan learns to really care for the little guy. Gimmie another season were the Count grapples with both the loss of his "son" and the revelation that the Sith still exist and offer an alternative.


Practice against the Clones was great, the kind of micro-story given some time to breathe that this show should be all about. Love seeing Anakin as a teacher, giving Ahsoka exactly the kind of physical challenge she wants... in sharp contrast to his own more spiritual and moral challenges.

Final ep was also good if a bit predictable. A little surprised not-Konshu was not anyone. And apparently not a physical being? Given how the decapitated head just.... deflates.
S

Citizen
I enjoyed them, but the Dooku ones were especially strong. While the final Inquisitor ended being a non-thing...he still had a damned amazing design that seems wasted in this context.

Citizen
I liked every episode except the last one, which was very clearly a horribly stripped-down version of the Ahsoka novel.