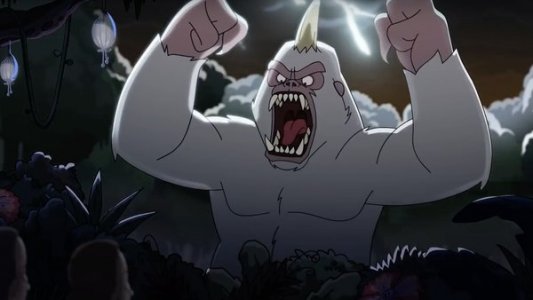 So generally speaking I find the show fairly subpar, but it has gotten better with the second season. The latest episode I actually found genuinely good for once due to the fewer "references we copied and pasted from the wiki" incidents and they've finally got dialog that doesn't revolve around screaming and flailing for no reason.


The first was the obvious incident of the mugatus mating. That in itself was somewhat low brow and not very original.. but when the third one came along and started making noises and rubbing his horn I laughed out loud.


The second one was when they ran into the scientist guy in the woods who said he was an expert because he had 5 books that were about the magutos. Then right before he died he clarified he didn't WRITE 5 books, he just had them.
Fear not - there were still parts I thought were stupid and wasted time, mostly revolving around Tendi and Dr. T'an.

What are your thoughts?

Staff member
Council of Elders
Citizen
Well this was meant to be a Lower Decks thread. The "mega thread everything" has really got to go.

Citizen
Glad to see I’m not the only one who never much cared for that.

Staff member
Council of Elders
Citizen
I feel weird saying this week's episode was sub par, but even for a Lower Decks episode it was kind of boring. I am glad they shifted to character development, but they still feel the need to waste time with "antics". The doopli guy was just dumb and the resolution for it was done. And we've shifted back to pointless "I read the wiki!!!! I know stuff!!!!" so-called easter eggs.

I dunno. This just seemed like filler for me, even by Lower Decks standards.

Citizen
I like having specific threads for specific things, but in this case, personally I was hoping megathread type content would help "neutralize" the thread so I could come in and post about a show I enjoy without feeling like I'm picking a fight.

Staff member
Council of Elders
Citizen
Eh... I split them up for now. I know Lower Decks isn't the greatest show ever told, but I think it's better when an episode of a show drops, especially the likes of Picard and Strange New Worlds, people can easily go in and see posts directly related to that show and not sift through dozens of other "Janeway killed Tuvix" posts.

Citizen
To clarify, Lower Decks is the "show I enjoy" I'm referring to.
L

Citizen
When Boimler says lure. I think he means the actual word 'lure' and not the character Lore.

Staff member
Council of Elders
Citizen
I really love this show. I think that the Collector episode was great, and I enjoyed the way the latest episode had them working through their differences from the ending of last season. I enjoyed the feel good moment of the crew partying together, and I honestly liked seeing that Shelby finally made captain. I would have loved to got some lines form her, but that is fine.

Staff member
Council of Elders
Citizen
Ill be honest when I first saw trailers for it. I was afraid it would be Star Trek's attempt at Rick and Morty.

Citizen
I love this show, but man am I behind. It's harder for me to watch because Paramount won't put out an app for the PS5, and my PS4 is in storage. Not being able to watch this from my home office makes it less likely for me to catch up.

Staff member
Council of Elders
Citizen
This weeks' episode was pretty good. There were a few laugh out loud moments and the plot wasn't too bogged down with too many side stories.

Citizen
Lower Decks Season 1 was by FAR my favorite Star Trek in years. Funny and Smart and very loving and knowledgeable about its subject.

-ZacWilliam, I don't have Paramount+ but I'm considering getting it when I get a chance largely to see S2 sooner.
T

Citizen
I enjoyed Season 1 more than I expected to, but I think the show is really starting to hit its stride with Season 2. There were jokes in Season 1 that were mostly just "hey, remember this from this other show?" gags. The writers clearly know their Trek, but some of those jokes kinda fell flat. It felt a bit like Family Guy's humour... the reference itself is what's supposed to be funny, rather than doing something clever with it.

Season 2 is doing a lot less of that, and doing a lot more character development. Of all the nuTrek (aka stuff that's come out since ENT was cancelled) this show also seems to have the most heart, and genuine affection for the Star Trek I remember. I also really love the TNG-esque aesthetic it has, from the uniforms down to the use of the Crillee SB font in the credits.
Last edited: Sep 18, 2021

Staff member
Council of Elders
Citizen
This week's episode was great! I love that it is showing that Bohlimer, or however you spell it, is growing as a character and a officer.

Staff member
Council of Elders
Citizen
Agreed.
Also figured out why it has a Rick and morty feel. Found out it has some people working on both

Citizen
Always fun with Jeffery Combs being a megalomaniac.

The Predaking said:
This week's episode was great! I love that it is showing that Bohlimer, or however you spell it, is growing as a character and a officer.
Click to expand...