So passes an age. An age of heroes, villains, and I don't even know what.

Citizen
When I'm feeling a little down, as has been my habit for many years, I head over to the Transformers: World's Worst site for a pick me up of very basic humour. Mostly from the early fics -- which are perhaps of a certain poignancy given the 25th anniversary of Beast Wars, but even their later attempts at a coherent G1-to-Beast Era narrative without losing the whole "Look, a lot of these tropes were patently silly" attitude was generally fun to read. Certainly, a generation later, the Tracks jokes don't really work as they did, not all comedy is timeless, and perhaps the writers view the saga as an Old Shame. Even so, I was surprised and saddened to find this at the site:

Everything ends, eventually. It was a shame that it couldn't stick around for the BW25th, but, oh well, Blow It.

Not all is lost, however.... at least some of the concepts and unique characters are on the Fanon wiki.
Last edited: May 20, 2022

Citizen
That site has been down for a decade.
N

Citizen
Talk for you!

Citizen
Geez, man, you made me think somebody died.

Pie is filled with many of the bounties of our planet, so who wouldn't like it? You can even have a gluten-free crust if you have that sort of condition.

Now I don't expect TFWiki to devote the same attention to pie that they did to jaAm, and that's all right. That being said, one hopes that this article is entertaining and informative for future fans as well as those who remember what it was all about. 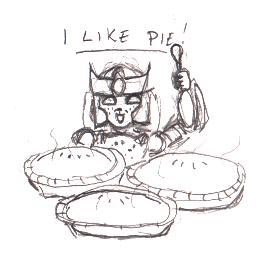 This is about the food that Cheetor likes. For the transcendental number that Computron likes, see pi. A baked good from Earth that may contain fruit, vegetables, or meat. Depending on the filling, it may be served as Breakfast, Lunch, Dinner or as a post-meal dessert. Cheetor is very fond of...

"Oi! Get away from our pie filling!" -- Crumplezone, "Armada: The Real Story".

Thylacine 2000 said:
That site has been down for a decade.
Click to expand...

Weirdly enough, though parts of it (such as the Newspaper) weren't working, one could still access Universe Profiles, Screenshots, most of the fics, artworks, even the old Beast Machines Episode Generator -- until the beginning of this year or thereabouts.

Now whether the site was maintained in all of that time is an open question. Given some of the internal links, I suspect not. But it's definitely in a deletion queue this year, and unless someone knows how to contact the owners (assuming they even want to remedy the situation -- it's entirely possible they don't), well, that's another piece of legacy fandom not-quite-lost.

Of course, you could argue that fandom isn't a site, and never was.... and Google Groups can certainly be trawled for the old fics. It's just a bit sad to see how much of Web 1.0 turned out to be as ephemeral as electricity.... And even though "World's Worst" is kind of redundant when the Transformers: Energon cartoon, or Kiss Players manga, or The Last Knight all exist, I think we could all use a laugh given... well, everything of the past few years, really.
Last edited: May 23, 2022

One of my few Modest Acheivements in Fandom was getting Scott McNeil to pen that phrase on a carded TM2 Dinobot....

Cybersnark said:
Geez, man, you made me think somebody died.
Click to expand...