Citizen
Unless he's too close to your anti-tech aura, and his determination to make the device fail will result in it never failing. Then he might be stuck in an endless loop.

Citizen
I never got into streamers, let alone streamers who are barely-animated drawings but the algorithm decided I should see this after I watched a video of some kind of dog girl playing Metroid Dread about a week ago. 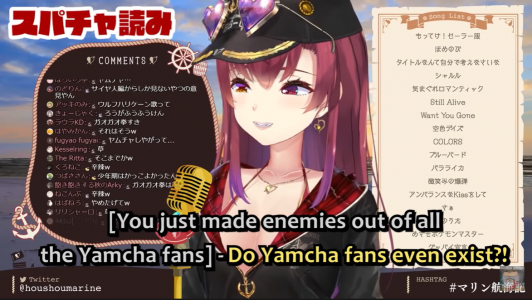 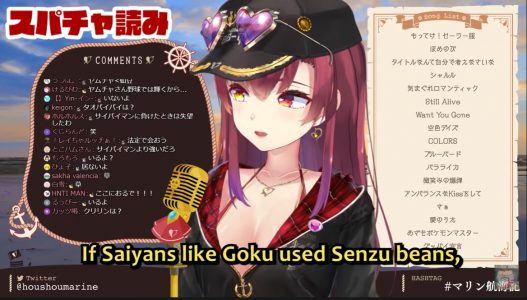 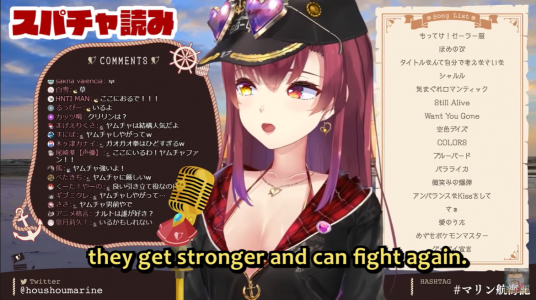 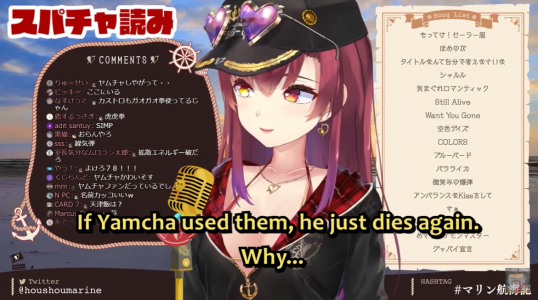 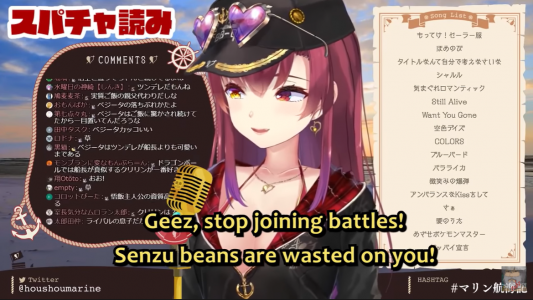 She knows what's up.

Citizen
V-Tubers are honestly the most embarrassing thing.

Citizen
If I ever streamed I'd want my own dragon snoot on there, but I don't plan on streaming. Too much work, and it would require getting a webcam. (Even PNGtuber stuff needs a webcam to read facial stuff, let alone something like Facerig.)

Citizen
I'd have the most horrifying avatar possible, stream maybe once, then decide it's not worth it.

Citizen
My view on streaming is that it's like watching a show that's all filler except all the filler is boring, awkward smalltalk and there's a decent chance something might happen but when it does, it's not all that interesting and the streamer will probably be overacting all the way.

Edit your video down to a twenty minute highlight reel then maybe i'll give you a view. Don't care if you're 2D or 3D.

Citizen
What do you mean you don't want to watch me pick my nose while I run around in circles waiting for a random encounter???

Citizen
Honestly the worst aspect of V-Tubers isn't necessarily V-Tubers themselves (as embarrassing and cringy as I find them) but the obsessed fans who act like they're real.

Like I know that V-Tubers are real in the sense that 'they're a motion-captured avatar rigged to match their performer's movements and speech' but I mean these obsessed fans act like they're actually watching/interacting with a real animu girl and not just a character being played by some random person.


Also the number of these characters that appear to be some underaged animu girl is too ******* high and really gross and I ******* hate weebs and anime culture. If you want to portray yourself as an anime chick, at least have the self-respect to not be pedobait.

Staff member
Council of Elders
Citizen
I didn't even know this is a thing. I want to go back. 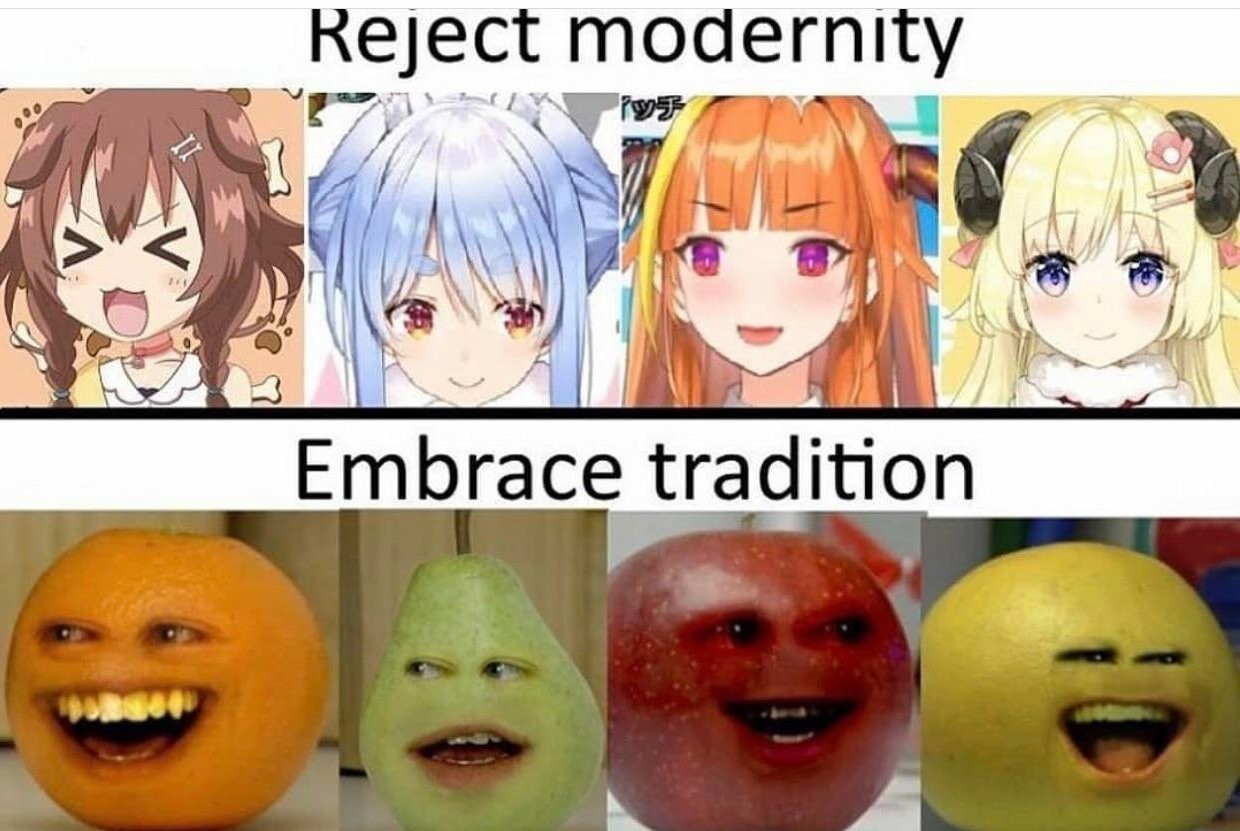 Citizen
Set both on fire.

Citizen
Yeah, this is new to me too. Honestly I don't feel any the wiser.

Citizen
It's funny how gamers keep complaining about how the devs don't play their own games... one of the very few streamers I actually will watch is actually the creative director for ESO(Rich Lambert aka Slashlurk) who happens to stream... ESO. Though honestly I'm not usually watching to see him play - he'll answer questions about ESO(provided it's not related to upcoming content) and sometimes tell stories about it's development, so it's neat to get those insights or inside peeks.

Like the time a relatively new security guard at Bethesda encountered Todd in a hallway and asked for his ID(and turned a peculiar shade of white when he saw whose ID he'd asked for). He actually still works there to this day and considers it a badge of honor.

Or like how the Stormhaven zone was redone 9 times before release because that was their prototype zone and they were still figuring out how they wanted to tell stories in ESO.

Or how Rich got initially put on ESO because he was the one constantly harassing Todd to make an MMO of Elder Scrolls in the first place. And One Tamriel, which saved the game, was half him(and half Matt Firor). They spent Christmas weekend brainstorming it out before they took it to the team. And even then half the team thought it was a crazy idea at first.

ESO's voice-acting everything was something he was initially against, until he actually saw it in action, and was impressed at how much it did affect immersion - and then he was all for it.

(One of the few time I go to explicitly watch them play is when they get a few regular ESO streamers and devs together for their "Tipsy Trial" nights on Thursdays, and that's mostly to see what shenanigans they're going to pull, since they usually do something stupid that makes it harder on themselves.)

Citizen
Dog girl was apparently why the logo changes to DOOG in Doom Eternal if you press chainsaw in the menu screen. I'd tolerate her more than the Annoying Orange on the basis of good taste alone. That shit was never funny
Last edited: Nov 29, 2021

Citizen
Usually, more than a few minutes of streaming bores me. I will watch pre-recorded stuff sometimes if I'm having trouble getting past something in a game, or if it's a game I just can't play. Even then, I prefer silent playthroughs over commentary.

Citizen
It kinda depends on the streamer more than the game being streamed imo.

I love Zelda. But if I were to watch some nameless Joe Shmoe playing with no personality, I'd be board to tears in minutes.

I don't really care one way or the other about Among Us. But I love the channels Outside Xtra and Outside Xbox and could watch them do an hour stream. 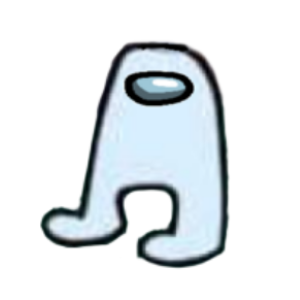 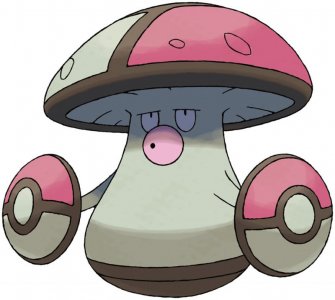 Citizen
All the times I watched Back to the Future and this never occurred to me (courtesy of TvTropes):