Citizen
Man, Deadpool's really going all-in to the multiverse for his next X-Force team...

Citizen
Target had a whole bunch of new NECA stuff tonight, Turtles and others. This was all I dared to get before payday. 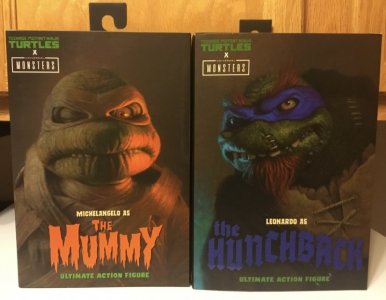 They didn't have Raph or Donny unfortunately. 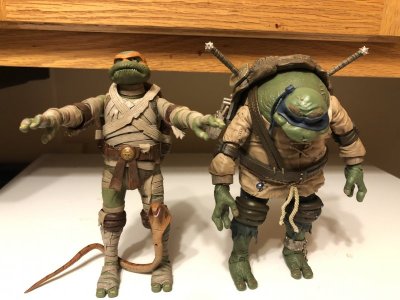 When I saw the preorder for these on BBTS, I thought they'd be an easy pass. But they actually do look really cool. 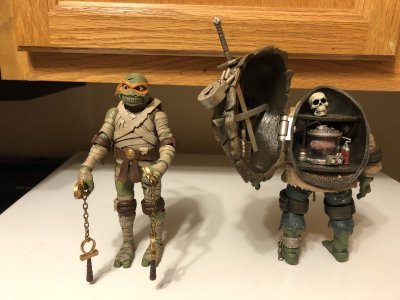 Leo has a storage shell. I never thought I'd see that gimmick again. Pretty nice!

Citizen
For a second, I thought that was the front of the figure opening up to show Leo's actual skull inside the body. *shudders*

Citizen
...
The fact that he's carrying a skull (and a brain) inside his shell is better?

Caldwin said:
...
The fact that he's carrying a skull (and a brain) inside his shell is better?
Click to expand...

It means the figure isn't showing his own innards.

Citizen
Mikey wins for having the decayed movie head homage. Becuase that thing is scarier then anything they could dream up.

Sabrblade said:
It means the figure isn't showing his own innards.
Click to expand...

That might actually be interesting for a Halloween or mature battle damage line. 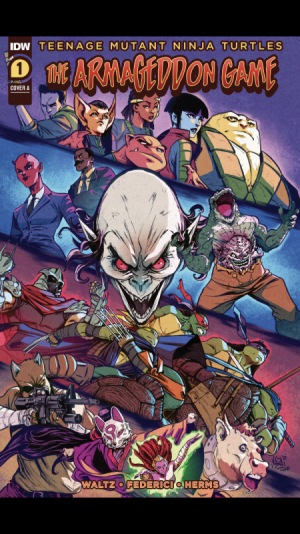 Edit for your convenience: 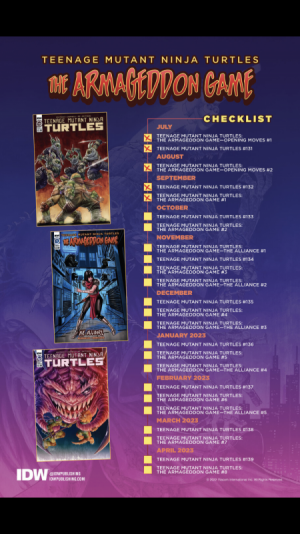 Citizen
"Gee, I wonder if my story arc might be too long," I thought to myself about what I'm currently writing.

Then I saw this.

Incidentally, spellings aside, I feel like this story needs more shark representation.

Citizen
I'm assuming this is an arena fight thing? Why isn't it a Nexus Battle thing?

Is that Cherubae (spelling) at the bottom part of the cover? I only know her from the Archie comics, who transformed Jesse something into Leatherhead.

Also, that's Cudley the Cowlick? He can fight?

Citizen
I'm just wondering, with a story arc this long and built up this much, what's the body count going to be like?

I want to say the Turtles are safe and there's no way they'd kill one of them. But then again, they did kill Splinter. It wouldn't surprise me at all if April, Casey and/or Baxter died.

I'm just saying, as much as they built this up, don't be surprised if there's some huge deaths in store.

Citizen
I have a hard time believing they'll kill one of the original Turtles, since they already Killed Donnie way back, even if he got better. And they just recently got done killing them in Last Ronin, sure an Alternate Future, but maybe still counts.

Citizen
Yeah, I seriously doubt they'd kill one of the four. I mean, after killing Splinter, it's hard to dismiss anything out of hand. But I doubt it.

but Jennika, Venus, Mona Lisa...Alopex...there are plenty of others that are nowhere near as safe.

Citizen
If I were to put bets on if any hero does, i'd lean towards Jennika or Alopex, with Alopex slightly in the lead. Mona still seem too 'new' to this series while Jennika has the right balance of having been around awhile and personal connection but it still feels like theres a lot of places to go with her; but Alopex seems to have largely come to 'end' in her storyline. Not saying there isn't more that could be done with her, but she seems like the 'safest' bet; and is one of the oldest character so has a lot of attachment; but then we could see one of the Humans die. I kinda feel April and Casey have almost as much plot armor as the main turtles, But Baxter seems like another prime target, and this version of him seems... way too lucky compared to every other Baxter in the TMNT Multiverse. I'm not saying I expect him to die; but I certainly feel him getting outta this even unscathed is highly unlikely.

Citizen
I absolutely love Alopex, so I really hope I'm wrong. But she did have a bit of a falling out when she found out the Turtles were working with Shredder. That puts another nail in the coffin.

Baxter and Hob both seem to have some overdue karma coming their way.
Z

Citizen
I don't think anyone's going to die, to be honest. BUT...if someone WERE to die...I'd put my money on Old Hob. If this really is Tom Waltz's last hurrah with these characters, I could see him wanting to put a capstone on the one character he's created that's been around since issue 1. There's still plotlines surrounding him, so I doubt it...but, you COULD have the Turtles deal with the fallout of his decisions without him being around.

Although...from that future that LIta showed us way back when...we might not be losing a character per se... 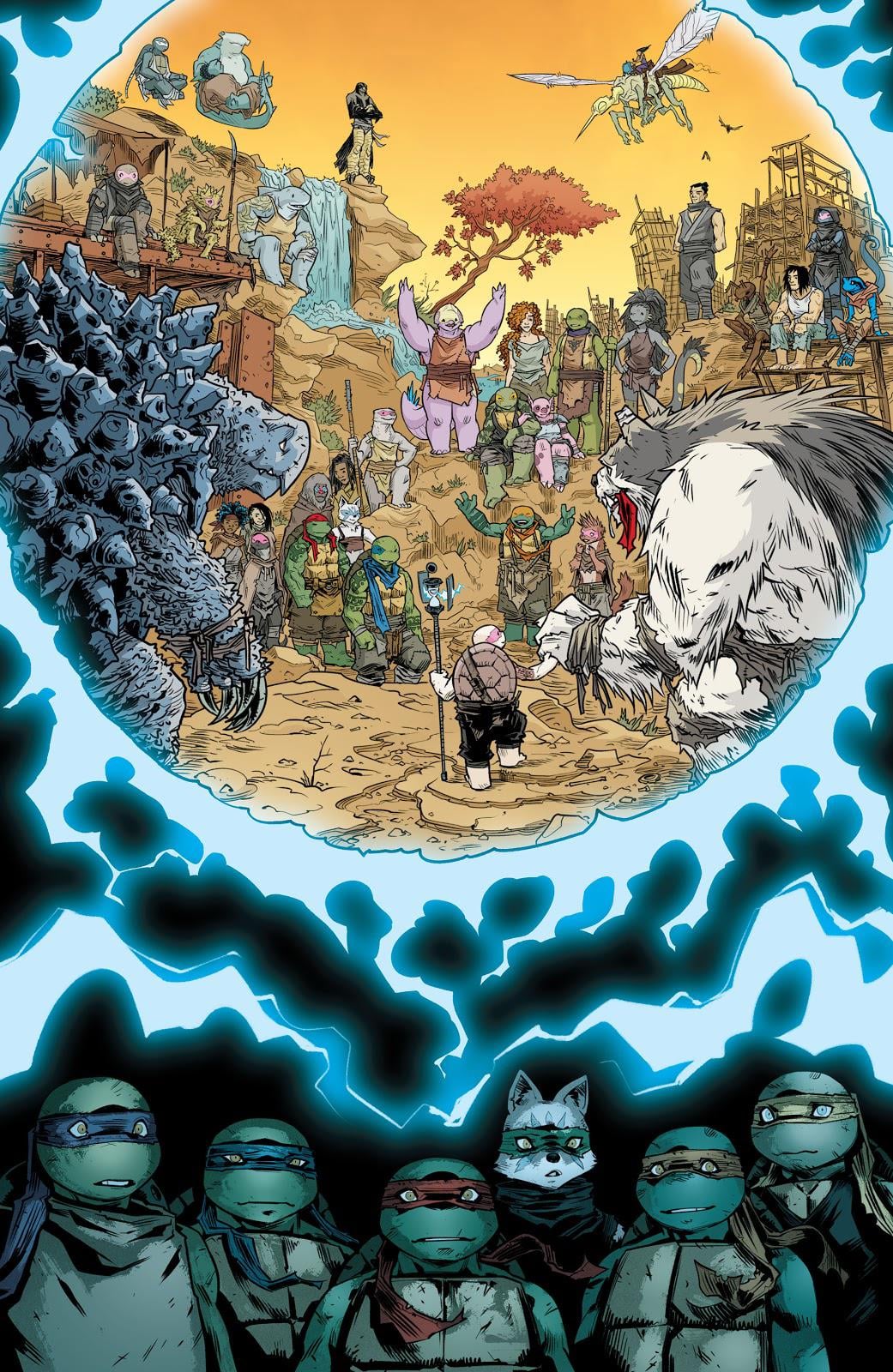 If we're still working towards THIS future, everyone lives...but it looks like the city didn't make it. But, Lita (the white turtle) might have changed the future already, so it might be a moot point.

I'm assuming this is an arena fight thing? Why isn't it a Nexus Battle thing?

Is that Cherubae (spelling) at the bottom part of the cover? I only know her from the Archie comics, who transformed Jesse something into Leatherhead.

Also, that's Cudley the Cowlick? He can fight?
Click to expand...

This isn't really a arena fight story (at least not yet). It's more like...a team-up of some of the villains who have been in the background of the story for awhile being manipulated into starting World War 3.

Yep, that's Cherubae, with the reality-manipulating Turnstone and all. She's a little different in this version, being from Dimension Z, and has a rivalry with Null. It's all in Armageddon Game Opening Moves #2.

Yep, that's Cudley. And...he's really just transportation. But, he's usually treated as VERY POWERFUL transportation, since he can go ANYWHERE. In this universe, or others, or other times.
Last edited: Sep 29, 2022

Citizen
It still amazes me anytime Cudley shows up. He doesn't seem like the kinda character with lasting impact, and yet... Dude gets around.

ZakuConvoy said:
Yep, that's Cherubae, with the reality-manipulating Turnstone and all. She's a little different in this version, being from Dimension Z, and has a rivalry with Null. It's all in Armageddon Game Opening Moves #2.
Click to expand...

Null?! Holy cow, the writer must really like the Archie TMNT (unless Null and Cherubae are in the original Mirage mythology or whatever?). Dang, is that horned lady on the left a new Null or something? Dang.
Z

Citizen
Yup, that's the new Null. She's been around for awhile, actually. Since IDW's Mutanimals miniseries in 2015. She only just NOW got a origin story, though.

And, yeah, it seems like Tom Waltz has some love for Archie's run. He's brought back a few characters and ideas from that run over the years. Mind, he brings in things from EVERYTHING. Like the Neutrinos from the 80s cartoon. And Darius Dunn from Fast Forward. It's one of the reasons why people like his tenure on the book so much.