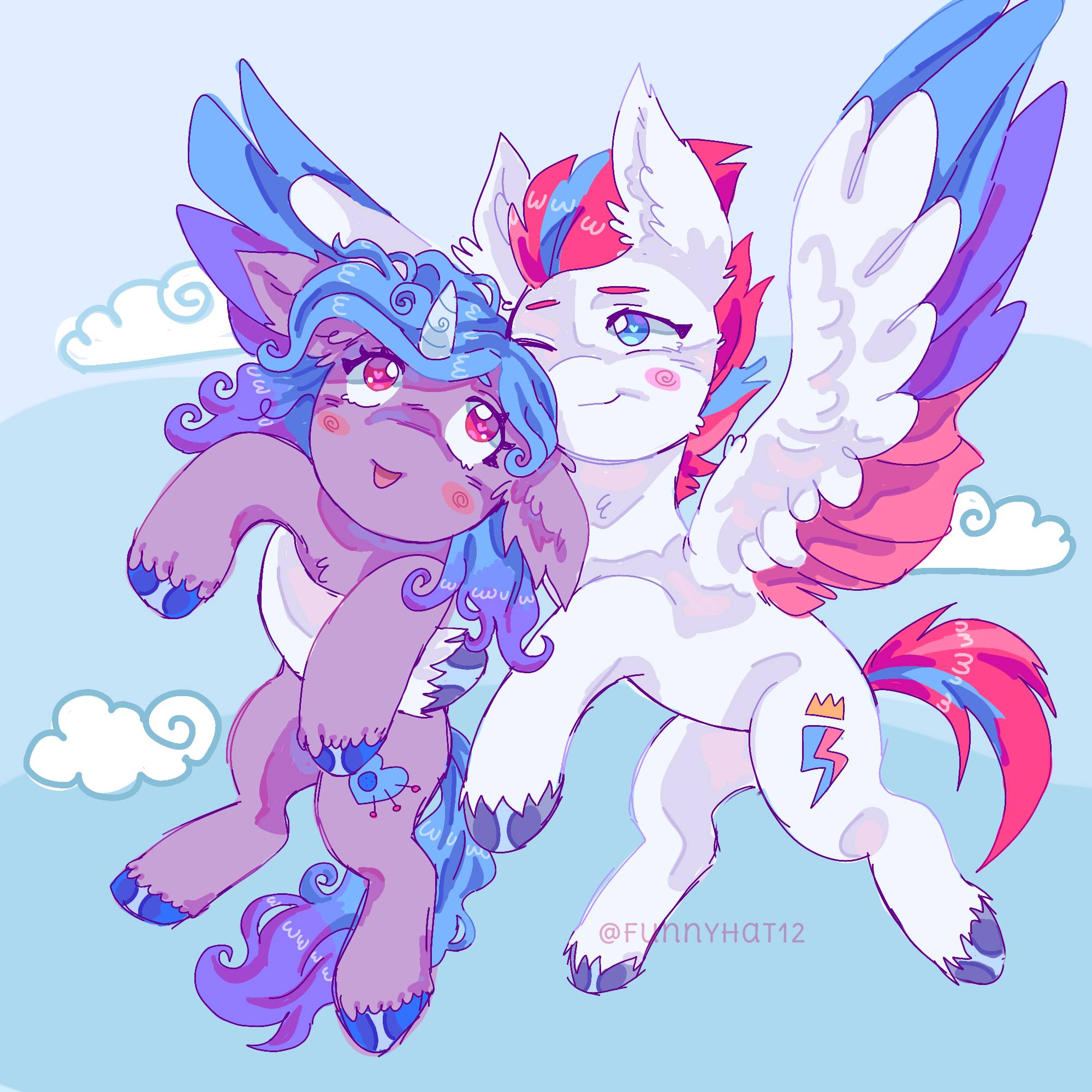 Izzy and Zipp take the stage!
And Izzy has plans for a new friend.
What are those plans?
And does this new friend seem...
Suspicious? 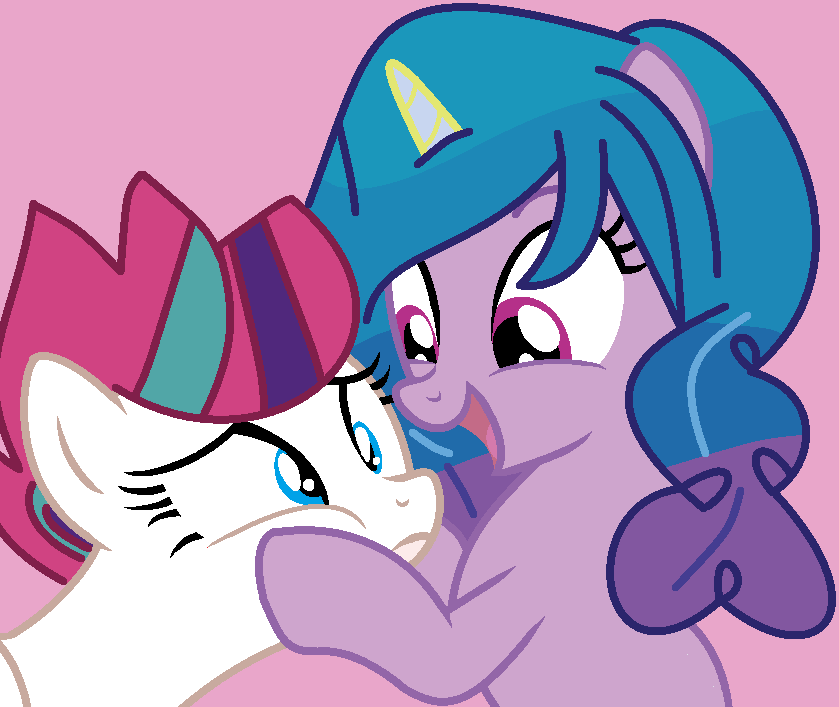 Izzy invites newcomer Misty to a sleepover with sing-alongs, hoof readings, ponycorn and more!
But Zipp has a funny feeling about the gang's new friend.​


0:28 We know how far away town is. She's been chasing this dragon for a while. Why not use telekinesis?

1:56 IDW established that Izzy feels lonely being the only unicorn in the group. Obviously this was part of the plan. Hasbro has figured out how to keep the different branches on the same page.

2:03 The villains are so bad at being villains. Every time they encounter the heroes they lose control of the situation immediately. The heroes are accidentally sabotaging a sabotage plot they have no idea is happening.

4:11 Something hits Pipp in the head again. Someone else can figure out the final tally. I'll be busy watching the movie again.

5:40 Oh Zipp. These villains don't know what they're up against.

6:26 I'm surprised this game isn't product placement. Come on Hasbro, you know you wanted to.

7:02 What is it with MLP and the tea propaganda?

7:23 Yeah I remember when my mother moved out and I got to experience sugar.

9:55 The Misty abuse is almost painful. But she is trying to be a villain, so she's an acceptable target.

13:40 Twilight blew it. That's the backstory they're going with.

14:46 Or is it? That'll be a twist if the villain's version of events is actually what happened. Some villains don't lie.

16:56 When Izzy is warning you that she's going to talk your ears off, you might want to listen.

21:33 This episode. As soon as you think the plan may be back on track, Zipp's waking up.


This is how you do suspense. Misty is the abused lackey who's obviously going to switch sides. So we're waiting for the episode where she gets Stockholm'd by the heroes, but this isn't it. We're now at a point where everything is going back and forth. Just when Misty is starting to have fun, she gets tortured. Just when the plan seems to be getting back on track, she's going to have second thoughts or Zipp will get in the way.

This is a duel now. The detective has her suspect, who's hiding in plain sight. Badly. Getting tortured by ponies who have no idea they're doing it. Except for Zipp who alone will be doing it on purpose.
Z

Sparky’s trying to eat flowers. Not sure if that’s a plot point with the Magic Tree in the middle of town or not.

Way to state the obvious in the most oblivious way possible, Izzy.

Our unicorns finally meet each other. This should be interesting.

I mean, there are LOTS of unicrons in town you could be friends with Izzy. Haven’t you noticed ANY of them?

Take note: Izzy is strong enough to lift a pony over her head.

“Something about you feels…different.” Like sixth ranger different? Maybe?

You know, we haven’t seen the unicorns “jinx out” in a while, have we?

‘AND A FACE! …Just like me…” It’s not everyday you meet a pony with a face, after all.

…Izzy’s never had a sleepover has she?

“Sweet sauce horseshoe toss” They have some creative expressions, I’ll give them that.

Misty has no last name. Being a foundling raised by Opaline, I guess. “Brightdawn” works, though.

Why is Pipp getting a glitterbeard a running gag in this franchise? TYT and now this. It’s weird that it happened twice.

What IS Ponycorn? And what’s that red stuff on it? Caramel?

Trotting Hill…we have a corny romance movie. Clearly a reference to Notting Hill.

Misty is going to town on that chocolate ponycorn

…Misty really channels that “Spike at the Equestria Games” energy.

Not just anyone can use the magic elevator to the Crystals. Good. There are SOME precautions being taken. Not sure how this would protect against a pegasus or something that can fly, but it's something.

Well, we learn how Sunny sees the story of G4. That wasn’t really “the beginning of Equestria” though. Nice artstyle here. Odd that they don’t show the other Mane 6.

“A earth pony got hurt by a unicorn” In the comics, it was Fluttershy getting hurt…but close enough, fine.

…And we even get to see the story Misty’s been told by Opaline.

Both of these stories are likely wrong, though.

WOW, with all the fireflies and stuff the community garden is really pretty at night.

There’s probably some important foreshadowing in Izzy’s rant about what she misses about Bridlewood.

The singalong is cute.

Citizen
Return of the glitterbeard!


ZakuConvoy said:
Why is Pipp getting a glitterbeard a running gag in this franchise? TYT and now this. It’s weird that it happened twice.
Click to expand...

Has to be done:

ZakuConvoy said:
What IS Ponycorn? And what’s that red stuff on it? Caramel?
Click to expand...

Likely their version of caramel corn

Staff member
Council of Elders
Citizen
This is the other contender for best episode. Izzy being Izzy, Zipp being Zipp, and Misty being tortured but also getting to have at least a little bit of fun. And some lore development. This episode actually did a lot, without feeling unfocused like MYM can be at times.

Citizen
Kind of sick of Martime Bay. It seems odd there are only 3 settings in the new show....makes me think the rest of Equestria was destroyed. The whole show gives me a post apocalyptic vibe.

Staff member
Council of Elders
Citizen
G5 is a post apocalypse setting that got the good ending. They really lean into it sometimes. I love that.
Z

Citizen
It kind of WAS destroyed. If we're assuming the whole of the Pony population lives in these 3 cities, then I think we have to assume the total population is MUCH smaller than in G4. These cities don't even feel that big. Canterlot felt more populated at times than Maretime Bay does. Mind, Zephyr Heights is probably supposed to be the "big city" setting.

But, yeah...limited settings kind of come with 3D shows. They only have so much budget. Hopefully, we at least get to explore Bridlewood and Zephyr Heights a little more in the next few episode drops.

Citizen
How does Bridlewood even HAVE movies? Like, they're shown to be at pre-industrial tech levels, using muscle-power and clever use of gears and ropes to replicate some lost tech. I'd expect them to have something like kamishibai or puppet shows instead.

Citizen
Hmm...combination of movie piracy and dumpster-diving? Maybe a few brave souls took it upon themselves to steal some VHS copies of movies out of their trash every few years in the dead of night (and thusly feeding into and creating some of the rumors about unicorns)? These towns really aren't that far away from each other, they can be there and back in a day.

When the pony equivalent of Blockbuster went out of business it was a unicorn national holiday!

...This has been your Daily Headcanon Minute...

Staff member
Council of Elders
Citizen
We used to have manually cranked film projectors too. It works. The hard part is producing light to project the movie, but there are non-electric ways to do that too. I wouldn't have expected Bridlewood to have movies, but it is totally doable.

Come to think of it, back in A New Generation, Izzy apparently understood the concept of a movie theater. For her to notice they're playing a movie she hasn't seen before, it kinda implies there are movies she has seen before. Bridlewood must have movies.

We can still believe Bridlewood is engaged in massive piracy.

Citizen
I suppose they could have had magic-powered theaters if the unicorn loss of magic was recent enough for Izzy to remember the beforetimes. Still, it feels like the writers decided that Bridlewood was WAY too crippled between the tech base and the superstition, and decided to dial it back a LOT in MYM. Notice how we haven't actually seen Bridlewood in MYM? Izzy planned to go home in one episode, but didn't make it very far. When we do next see it, they'll probably have redesigned it to be less dysfunctional.