Citizen
Wow, I hope it's awesome. I hope Wanda comes back good again but I feel that's she'll be saved for a movie event where they need her as a last second big gun to save the good guys from a huge threat, in a movie. Only way to forgive her for her murders at the temple.

If I got to pick I'd base some of it on the Story where he gets his red/green look back. I don't expect anything like an adaption of the Gathereds story but the weird Alternate Avengers and the Evil Vision were all kinda fun. And it's not like they have Dane and Hercules doing anything else right now.

-ZacWilliam, I'd love to see them borrow a few bits from it is all.

Fero McPigletron said:
Wow, I hope it's awesome. I hope Wanda comes back good again but I feel that's she'll be saved for a movie event where they need her as a last second big gun to save the good guys from a huge threat, in a movie. Only way to forgive her for her murders at the temple.
Click to expand...

I highly suspect she’ll have had some sort of mind control that “forced” her to act that way so regular/normal Wanda is in the clear.

The Wonder Man I'm familiar with is the 90s one where he's trying to make it as an actor. I figure it would be in the same vein as She-Hulk. Dunno what's the tone for the new one.

Citizen
Oh I can't wait to hear the endless bitching about Wonder Man being black now...

Citizen
I probably have more affection for the Comic Version of Wonder Man than most people. I came into West Coast A with the Byrne issues where he's pining over his crush on Wanda and then his 90s book at Marvel was one of my favorite things in its early days. (Long before we found out what a horrible creep the writer was. At least the art in the early run hold up well.)

This is fine. Being a white guy is in no way important to Simon as a character. His character has been over the years:

1) Bad Guy who had a turn of heart and martyred himself to save the Avengers.

2) Guy who woke up and found his life had been "taken over" by a copy of himself (The Vision) and had a big crush on the copy's girlfriend.

3) Fun goofy buddy of Hank McCoy who "goes hollywood" and wants to be a "Serious Movie Star" but is always dismissed as an action beefcake by said Hollywood.

4) Guy who has died and come back a lot and is first broody, then unbalanced about it.

5) Guy who has tried to get his head on straight after #4 and become a Pacifist while still trying to help people as a hero.


There's nothing there this guy couldn't theoretically nail out of the park if Marvel wants to focus on it.


-ZacWilliam, visual-wise I like the 90s look of Simon in the comics yeah, but there's nothing here that would in anyway lead a non-racist to think this guy couldn't look just as cool in costume.

ZacWilliam1 said:
This is fine. Being a white guy is in no way important to Simon as a character. His character has been over the years:
Click to expand...

While I agree, I also feel like this applies to at least 90% of white characters.

Honestly, I don't care about Wonder Man enough for it to matter either way to me; becuase for me he's always been "That dude that died so Vision could live" - simplification, yes; but still. The only thing really of note that he's done, is die and be 'cloned' into Vision. And Since Vision is already his own person; it seems weird that MCU is even bothering with him. Sure he had a life after that, but he's such of an obscure nobody compared to most the people the MCU decide to cast.

That said, they could easily focus on 3-5 on your list; and MCU does tend to do a good job of making me like characters I didn't think I would (*cough*MoonKnight*cough*) but has also made me not like a character that I normal do (*cough*She-Hulk*cough*) but there is much more of the former, then the latter so I'll be curious how this turns out.

Btw, who decided that Simon would be a movie star? Like, I only knew of him at the start of the 90s series and I didn't realize he was a scientist beforehand. What prompted a former scientist to be a movie star?

Like, his thought process? Did he think he was a brilliant actor because he fooled the Avengers into thinking he was a good guy initially? I'm assuming he was friends with Beast because both are scientists (did Beast jokingly convince him to be an actor?).

Who was the writer during that time and turned Wonder Man that way?

Citizen
Yahya has to have a record for playing major live action comic book roles at this point, right? With Black Manta, Dr. Manhattan, and now Wonder Man.

Citizen
My only familiarity with Wonder Man is from the short-lived Avengers: United They Stand cartoon, and I barely even saw that show anyway. 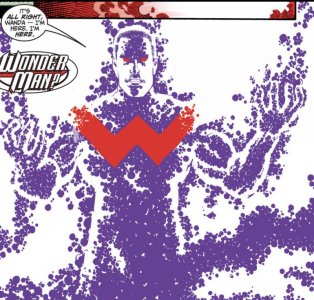 And it’s pretty much the most I know of Simon outside of cartoons. So not really concerned about this much.

But I swear Deadpool 3 needs to get Hugh in the Yellow Spandex!

Btw, who decided that Simon would be a movie star? Like, I only knew of him at the start of the 90s series and I didn't realize he was a scientist beforehand. What prompted a former scientist to be a movie star?

Like, his thought process? Did he think he was a brilliant actor because he fooled the Avengers into thinking he was a good guy initially? I'm assuming he was friends with Beast because both are scientists (did Beast jokingly convince him to be an actor?).

Who was the writer during that time and turned Wonder Man that way?
Click to expand...

Yeah, Gerard Jones was sent to jail for possession of a large amount of child pornography. Marvel's probably unlikely to collect that run for that reason, D+ show or not.

Simon wasn't ever called a scientist really. He was called an "Inventor" and portrayed as a rival industrialist to Tony. Tony's superior patents made his worthless and his company failed so he embezzled from his own company to try to stay out of bankruptcy. He was caught and blamed Stark. He was going to trial for that when Zemo and co. recruited him.

I have a Marvel Unlimited subscription so I looked through all the early back issues of his history this morning. He was revived in Avengers #153 in 1976. He hung around with the team consistently for the next 3 years of the book. Just trying to figure out his resurrection and being a hero.

The acting thing comes in Avengers #181 in 1979. It's a big "shake-up the team roster" issue by David Michelinie. The team had acquired a larger number of members and hangers on over previous stories and this issue uses Gyrich demanding a streamlined government sanctioned team to write most of them out of the book.

The issue opens with Wondy and Beast taking in a movie (Robin Hood). Wonder Man wonders why folks are so into escaping into Movies and idolizing Movie stars and he and Beast discuss it as something folks need to make their lives more enjoyable and exciting. Later in the issue when Gyrich cuts him from the team Wonder Man decides to follow up on that thought by trying to be an actor. Saying that if he can get comfortable playing roles on stage maybe it would make him more comfortable playing the role of a super hero. And then he's out of the book.

The next Avengers issue he shows up in was the next year in 1980, and he mentions he was apparently in a show on Broadway that was panned for being slow and boring so was trying out for a role on a TV show instead. Being the "Superhero who is trying to be an Actor" has been his deal ever since.


-ZacWilliam, I don't think his being an Inventor is mentioned much ever, nor has what exactly he invented that Tony Stark outdid really come up, in the original stories or since.

Citizen
Thanks for the answer! Wiki didn't delve into details.

I was just joking about Beast being the cause of his career switch. It was sorta real?!? Holy cow!

I love David Michelinie's Spider-Man work (his Peter got a lot of special time with MJ, haha) so I love it that he's the one responsible for writing that thing for Simon. That's just amazing!

Citizen
It's a throwaway joke but can someone explain it? Who is Drax's cousin? 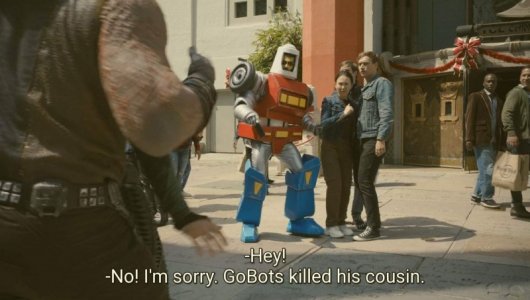 Citizen
I think it's just an absurdist nonsense joke. Drax has a dead wife and his daughter is Moondragon in the comics, and in the Movies he's an alien and has a different dead wife and a dead daughter. No cousins that I know of.

-ZacWilliam, basically they are just being silly I think.

Citizen
I would get it if he had a teammate who was killed by a robot but saying cousin is just weird. Boo.

Credits list him as Gobot. Didn't even say Cy-Kill, c'mon!

Anyhow, saw the special. I had a feeling it would be stupid fun and it was but it actually got me when Peter was stepping out. Great light work.

Love the sweet Mantis from the movie but she's showing some edge here. It's not bad but a bit jarring when she yells at Drax. I was a biiiit miffed when she said 'my friend is an idiot' cuz my afterthought was 'she could have said my boyfriend is an idiot', hahaha

I wonder why they gave the reveal at the start instead of the end. I guess so it would subvert expectations? Cuz it didn't occur to me at all.

Where was Groot's art skill shown before that way?

Citizen
On the 1st I'm placing my order for the MCU movies which are the first 24 up to Black Widow. The rest I'll get in January - March before any new ones come out. Once I fill in the MCU movies I won't go to the theater at all. I may also drop stream after Doctor Who is finished on Disney +.

Citizen
Stan the Man is getting his own documentary: