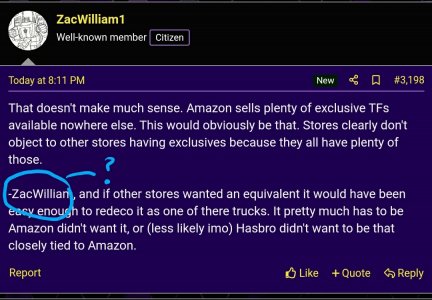 That's just one of his quirks. He tends to "sign" his posts with a

and then add a quick P.S. section after the signature.

Donocropolis said:
That's just one of his quirks. He tends to "sign" his posts with a

and then add a quick P.S. section after the signature.
Click to expand...

I posted the image here, because we can't attach images (from a file) to PMs (only from URLs) for some odd reason (and then used the URL of the image above in the PM). I PM'd them about their use of their name so as not to interrupt a thread.
Last edited: Dec 10, 2022

Platypus Prime said:
I saw Tarantulas on the scooter and wondered what Pee Wee's Playhouse was LIKE in that universe...

In other news, I found this I did YEARS ago... 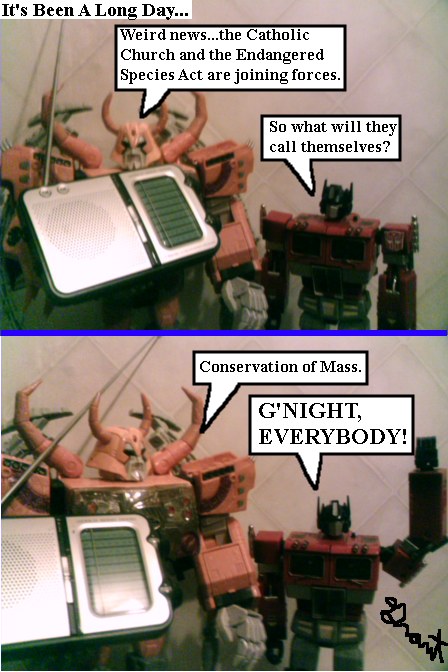 The Mighty Mollusk said:
Are they saying "boo" or "Boo-nicron"?
Click to expand...

CoffeeHorse said:
JG1 continuity may be the most complicated storyline of all time at this point.
Click to expand...

Platypus Prime said:
Only in ONE timeline, in another caused by Unicron and Cthulhu having a few drinks during the game, Japanese G1 becomes the simplest one to understand, it starts out with anime girls and robot penguins being turned into-(insert 49 volumes of manga only included in Lucky Draw exclusives and one Takara-Tomy Mall release)-and then the gold chrome flaked off to reveal that under it, Optimus was still alive the whole time!
Click to expand...

Dake said:
So what the heck is Freezer?
Click to expand...

ZacWilliam1 said:
Freezer is even colder box above Fridge.

-ZacWilliam, but that's not important right now...
Click to expand...