IDW to Lose the Transformers License?

Staff member
Council of Elders
Citizen
The thing about getting old is you see so many eras start AND end. And when they end, if they were fortunate to run long enough, you look back and remember where you were when each of the phases in the era were happening. 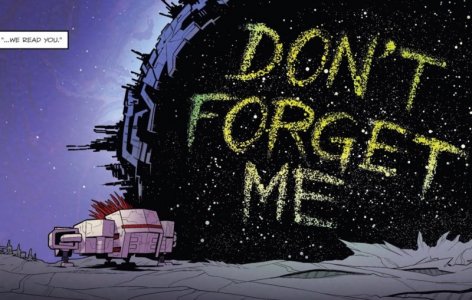 I got out after Transformers: Unicron wrapped the 2005 continuity, but have been fascinated with the secondhand wiki info I come across about the 2019 stuff. It's bittersweet that I'll be able to binge that much faster. But it was a fun run, all things considered.

Citizen
I’m very interested to see where it goes.

Optimus and Megatron fighting each other on a bridge seems so passé now.

Citizen
If someone asked me right now what I want from a Transformers comic, I honestly wouldn't know what to tell them.

"How about a prequel story, leading up to the war?"
"We literally JUST had that."
"Well how about something set after the war is over?"
"That's just gonna make me miss the previous IDW series."
"Okay, how about a comic ABOUT the war?"
"That's every other piece of Transformers media ever!"
"Well then what the hell do you want?"
"Reboot Silverhawks or something, I don't know!!!"
X

Citizen
Across the entire intellectual property, what Hasbro needs is a Fresh Take. They dug so deep into the nostalgia market the past few years, they can't see sunlight anymore. Combiners, -Masters, Pretenders, Beast Wars...all the original G1 ideas have been revisited. From Masterpiece to Studio Series, the perfectly accurate G1 character model market has run dry. Legacy is the apparent forerunner of the franchise for the near future, and it's literally just "I dunno...here's some stuff."

"Basically G1" just isn't a selling point anymore. Somebody actually needs to come up with a new idea. An idea feeds the toyline, makes a backstory, makes fodder for a comic, etc.
E

Citizen
I blame the pandemic for this. Just saying.

Anyway, I'm sad that the end is apparently in sight. I just hope that we get a satisfactory conclusion.

Xaaron said:
Across the entire intellectual property, what Hasbro needs is a Fresh Take. They dug so deep into the nostalgia market the past few years, they can't see sunlight anymore. Combiners, -Masters, Pretenders, Beast Wars...all the original G1 ideas have been revisited. From Masterpiece to Studio Series, the perfectly accurate G1 character model market has run dry. Legacy is the apparent forerunner of the franchise for the near future, and it's literally just "I dunno...here's some stuff."

"Basically G1" just isn't a selling point anymore. Somebody actually needs to come up with a new idea. An idea feeds the toyline, makes a backstory, makes fodder for a comic, etc.
Click to expand...

I would say exactly the opposite tbh.
X

Citizen
...the opposite being what? "More of the Same" instead of "Fresh Take"?

Citizen
.....I got nothing...
Honestly I bought everything I kept hopeing something would reignite my passion for TF comics but I honestly just sold off my IDW run and trades (an entire long box)
I kept my Complete Marvel Collection and my Complete Dreamwave run but the comics series and characters I liked in IDW era are few and far between
Im looking forward to next take on TFs whoever gets the license

UndeadScottsman said:
I'll always wonder where the reboot story would have gone if they had had a decade to play with instead of 3.5 years, but at least this is known early enough that we might get some kind of conclusion.

Not sure what the next guys are going to be able to offer to get me interested, but I'll definitely give it a try.
Click to expand...

Well, I mean, IDW managed to give us something interesting after dreamwave went under, so it is possible

Xaaron said:
...the opposite being what? "More of the Same" instead of "Fresh Take"?
Click to expand...

I wouldn't agree with the proposition that Hasbro have done nothing but nostalgia for the last few years, and I definitely wouldn't agree that a "fresh take" (which presumably means an Armada esque interpretation with only lose similarities for some characters) would be very successful for a comic book when the direct market is overwhelmingly 35+ year olds.

It would be possible for the brand to hew *considerably* more to G1 than IDW ever did, and to be honest I think that's the most likely approach.
Last edited: Jan 21, 2022

Staff member
Council of Elders
Citizen
It would be nice to grow a new direct market, because the current direct market is good for many things but won't be forever.

Questionable Meats said:
Well, I mean, IDW managed to give us something interesting after dreamwave went under, so it is possible
Click to expand...

Well, Dreamwave only had a license for a few years. (ANd, uh, didn't produce the best quality stuff.) so that's not quite the same as a company that's held the IP for like 15 years now. (And while IDW2 isn't the same as IDW1, they did carry over a lot of ideas and flavor)

Honestly, the thing I'd want most almost certainly ain't going to happen, so I'll probably be meh on it until it gets a few issues. in. I'd love it if they'd just move past the war stuff; set it post-war with an uneasy peace between the bots and cons, where Prime's leads a team of Autobots who are forced to work with a team of Decepticons lead by Megatron, in order to safeguard the future of their species. But that's mostly because I'm warred out.

Citizen
WHat I'd like to see honestly would be something more towards early Beast Wars NEO(and MTMTE I suppose). A group of bots on a ship looking for a macguffin, and basically Star Trek Lite the hell out of it. Have them have to take new forms to blend into each planet and investigate(this part's probably a pipe dream because To Sell Toys), run into anomalies and subspace nuclear wedgies, and occasionally deal with cons or some other enemy also after said Macguffin.

Citizen
IDW had a hell of a run. In this business that alone is enough to celebrate.

As for what comes next...?
I'd just like to see a back to basics Earthbound story.

Staff member
Council of Elders
Citizen
Back to basics, and one whole story per issue please.

Citizen
IDW had some excellent creators give us creative and entertaining stories. I hope whoever gets to publish Transformers next is able to do as well.
K

Citizen
While this might not be everyone’s cup of tea, there is an era of G1 we haven’t covered. Effectively, in the same way Star Trek has the Lost Era series of books there’s a big gap of stories in the Sunbow universe between 1985 and 2005 that’s never been covered in fiction.

Maybe Bumper and Hubcap never appeared in Season 3 because they were dead. Sideswipe was missing in TFTM — why? Show the Season 3 crew coming to earth. Sure, the stakes for certain characters can never be high, so don’t even try with that. Instead, make us care about the B-listers who didn’t make the movie or post-movie cut.

Likewise, pick up after Rebirth. Tell that story. The comics have continued the Marvel run in various ways, yet a G1 cartoon prequel/sequel has never been attempted.

Pick up after Beast Machines in another book. Better yet, show us how G1 ended and the Beast Era began.

If we’re stuck in a G1 forever mindset, why not revisit the cartoon era?

Edit: I know this might not be the fresh take some are asking for. I wanna clarify that I completely understand what is being asked here. I’m just saying if we’re not going to get a fresh take, why not go back to the roots in a way no other book has even tried?
Z

Citizen
I wonder if the one-shots and whatnot will go back to the IDW1 continuity or if they'll stick with IDW2 until the end. Odd that they're keeping My Little Pony, since they haven't solicited anything for that for either March or April...but then again, they're probably waiting for the new show to finally come out, I guess.

And, yeah, I'll agree, between Roberts and Barbers run at IDW and Fun Pub's run of completely crazy continuity callbacks...I'm not sure what it is that would get me really excited for the next Transformers comic. I think part of the reason I never fully embraced IDW2 was because I was still carrying a torch for IDW1.

You might be able to do something with all the Japanese G1 series. Maybe, basically having them all happen at once, so you could have subplots with Star Saber trying to find his footing on Earth, while mysterious entities are giving humans the ability to turn themselves into Transformers, and Optimus exploring the far reaches of outer space in the meantime? As much as the Japanese G1 stuff gets referenced, I don't think it's ever really been "introduced" to a large audience properly. There's a opportunity to remix some of those ideas.

It'd kind of be fun to do Beast Wars, but on a bunch of alien worlds. Mind you, the current Beast Wars book *might* have been leading up to something like this anyway, but a book that starts out with them taking new alien-looking alt-modes could be kind of fun. Maybe facing off against something like Scorponok's Machination companies on different worlds, or searching for Shockwave's ores or something?

We could do something post-Beast Machines, with everyone being techno-organic...but I feel like there's a reason we never got anything that ever really embraced that concept. Plus, we have gotten versions of the Transtech guys, and some of the convention stuff does go into post-Beast Machines territory. Still, if you could find a interesting angle to the techno-organic stuff, it'd be a new direction.

Or...um...plants? We never did get to see more Transformers like Botanica. You could do...something with that, I guess? Maybe a group of Transformers terraforming planets for a group of human allies that are following after them, following the destruction of Earth? Helping all these humans find new homes. I'd be...different, I guess.

I mean, most likely, we're probably going to get a back-to-basics war book on Earth. It's actually been a little bit since we've had that in the comics, really.

Kup said:
While this might not be everyone’s cup of tea, there is an era of G1 we haven’t covered. Effectively, in the same way Star Trek has the Lost Era series of books there’s a big gap of stories in the Sunbow universe between 1985 and 2005 that’s never been covered in fiction.
Click to expand...

Kup said:
Pick up after Beast Machines in another book. Better yet, show us how G1 ended and the Beast Era began.
Click to expand...