Citizen
Previously, on My Little Pony... 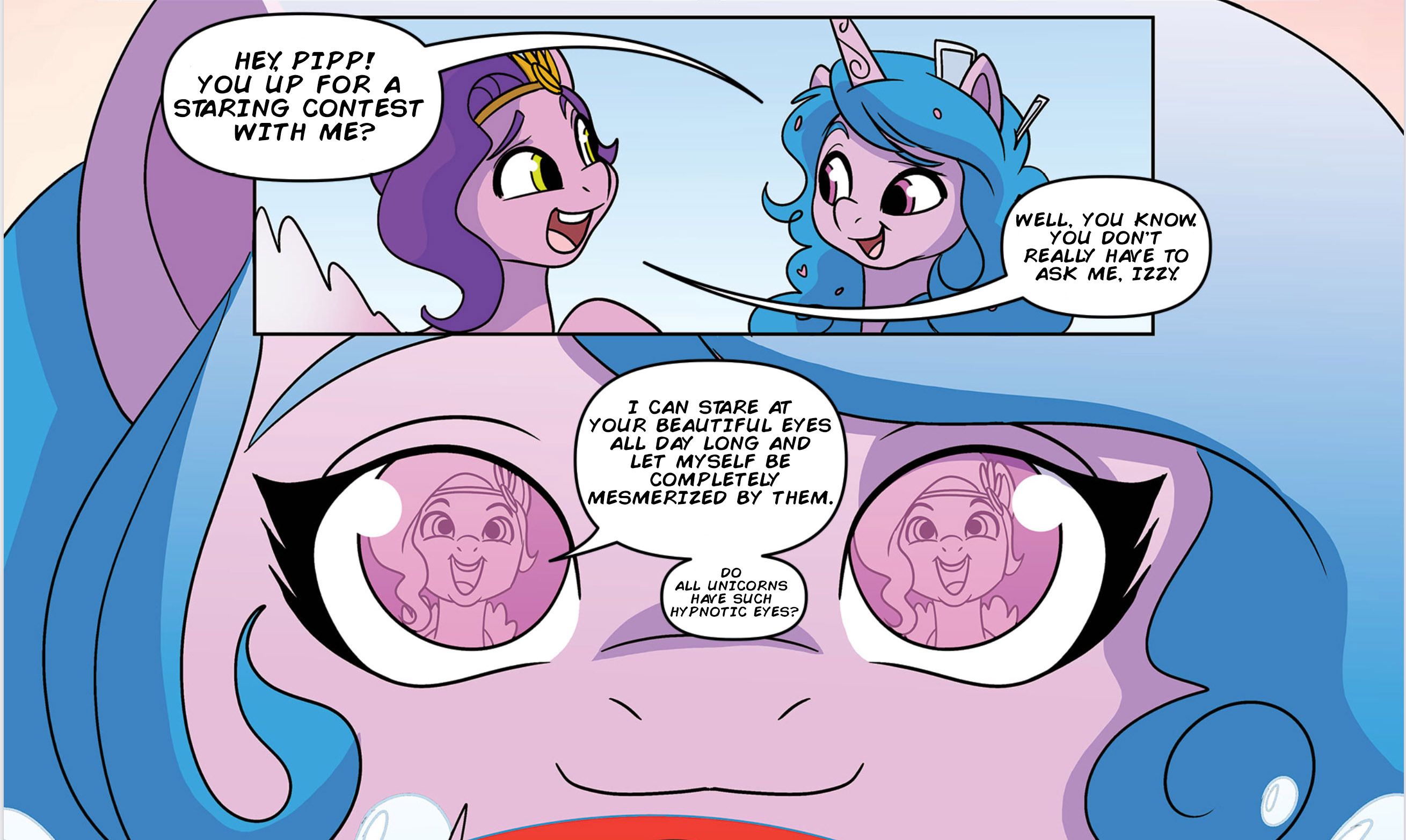 (Look deep into Izzy's eyes. Tell her all your secrets, she'll tell you no lies.)

Greetings and bienvenue, TROALS and CHILLIES. If you feel that nip in your spine, it's not because of the ghastly weather. It's that time of year when a young mare's fancy turns to hearts...and spleens, and other assorted internal organs. You're not travelling through another dimension, You have no control of the vertical or the horizonal...department stores already have Christmas Trees up and our Halloween issue has come early this year! Will our BONIES survive or will they end up stiff as a board? (And not because of a cameo by Elvira!) Get ready for the most MARE-TIFYING tale this side of Berwyn! Submitted for the approval of the Luna Appreciation Society, we call this story... Okay, I'm done, I can't keep this up the entire play by play.

This issue is....fine. I think it's JUST spooky enough. It HAS a tone. There's even a couple of twists to keep you on your toes. But, some of the events are...vague. It's a little difficult to parse what happens in places. And...there's one BIG continuity problem (...MAYBE). This issue's kind of a mess. But, if there's any time for that, it's in a "scary" story like this. "Horror" stories don't HAVE to make sense to work.


From the first page, I was a LITTLE worried about the continuity. But, that isn't Sunny's lighthouse. They're in a completely different town. It's odd that there IS another town, because there's only the three we know about. Still, that's kind of a hint at what's to come....

It's kind of cute that we get a few pony-fied terms in this issue. Wikiponia is a thing. And "Bloody Marey" is a spooky tale. I'm a little surprised that Pipp's phone works between the storm and...future revelations.

And we learn about...The Mirror of Mayhem! Yeah, this is a total retcon, but oh well.

Apparently, there was a mirror facing opposite the stained glass window that Discord was imprisoned in, which he uses to hypnotize other ponies, and that's how he was able to "travel" using the mirror. This...makes NO sense, since he was imprisoned as a STATUE not in the STAINED GLASS WINDOW. This entire issue is hanging on a mis-remembered scene. There's no getting around this. I guess it's POSSIBLE that Discord was imprisoned a second time, after the end of the show, but...nah. The writer messed up. OR...there's another possibility I'll bring up later.

We meet Fet Lockland. I'm sure that's a reference, but it escapes me at the moment. A evil, haunted secondhand store full of cursed objects is cliche, but it works. This story is already filled with SO MANY cliches it feels right at home.

The pony who gets hypnotized into walking off a pier is JUST the right combination of silly and spooky, to me. She dropped the mirror, so she's probably fine.

I kind of feel bad for the pony who gets married to a mustachioed villain. Who...might beat her? There's emphasis lines on his hoof. That might be what's implied. That's a little too dark for a Pony comic.

This mirror can do a LOT. Hypnotize ponies against their will. Give them bad luck. Show them a twisted future. Almost as if someone's throwing a bunch of random ideas at a wall without giving it much thought.

Note: Do NOT give Zipp surgar while she's on a mystery. She get's WAY too excited.

I bet you all thought that the lighthouse keeper would turn out to be Fet Lockland, right? I was kind of going that way, myself.

Some of the scenes with ghost-Discord are kind of atmospheric. I think there's parts that are well done.

The explanation that destroying the mirror...also destroyed the town confuses me. Yes, an ironic punishment to a Pony who just wanted to keep his job, fine. But, why Discord would destroy the entire town, I have no idea. Even before he met Fluttershy, he'd rather"play" with ponies than burn things to the ground. It's also weird that the explosion was enough to destroy his unicorn horn. This IS a ghost story, so being vague is okay. But, maybe this was TOO vague.

And then we find out...he was a ghost the whole time!

I kind of wonder if this will end up being Discord messing with everyone. The whole thing being completely fake, a tale he created to throw them off his actual trail. Since the original e-mail was sent by Discord last issue, there's a good possibility this could be true. Zipp even points out that there's...problems with the timeline, here. Which would make this issue a little pointless. But, if they DON'T do that, it's a mess.

Staff member
Council of Elders
Citizen
Bad art is bad. I couldn't get past it.
Z

Citizen
*shrugs* I've seen worse. This isn't going to win any awards, but it's...fine, to me.

Citizen
The continuity issues are a sign that this is an alternate universe, deliberate in-universe misinformation, or just lazy writing.

Staff member
Council of Elders
Citizen
Maybe Hasbro gave them only part of the backstory and expected them to do their own thing with it, but they don't want to contradict the rest of G5 so they're spinning their wheels hoping they'll get the rest of the details before they have to commit to anything.
Z

Citizen
That's probably at least partially it. Hasbro's doing better this generation getting everyone on more-or-less the same page. But, they're still not 100% there, yet. If they want this franchise to cover SO MANY different mediums, they really need a continuity czar. So, it makes sense that IDW doesn't want to get TOO far ahead of itself.

I'm fully expecting IDW to be playing catch up. Issues 11 onward will probably have SOMETHING to do with Opaline and Misty. Like...they decide to have a adventure where Opaline and Misty are looking for the Crystal Empire's Crystal Heart or something. They've changed goals often enough, one more couldn't hurt.

Citizen
Nah, I mean even the G4 contradictions. At what point would Discord have been trapped in a mirror by the sisters? Celestia turned him to stone, and after his intentional release and rehabilitation there was no point during their reign when he would have needed re-trapping. After sealing away the magic, could he even have been sealed away, assuming Twilight was indisposed and it was back to the sisters (who then vanished entirely from history)?

Citizen
I canceled my subscription after this one. I think I'm just done with MLP for now. Maybe that's not a bad thing. Interest in things just kinda comes in waves. Right now I'm pretty much in a low point with MLP... and honestly, aside from the movie and the video game, I've seen very little qualitywise to bring me back.
Z

Nah, I mean even the G4 contradictions.
Click to expand...

I'm more agreeing with the "only got part of the story" and "spinning their wheels" part. I'm still betting on this being a prank by Discord, myself. But, I DO think that IDW is only working off what Hasbro gave them. And I doubt Hasbro told them EVERYTHING about what was going to happen in MYM. So, they're probably trying to buy time until they get more details, just like the rest of us.

I canceled my subscription after this one.
Click to expand...

I'm sorry to lose you. The way they've decided to pace this is terribly unsatisfying. If it makes any difference the "main" team is coming back for 6, 9 and 10. Maybe you'll want to check those out just to finish out the Discord story? But, if you're not feeling it I can't blame you.

Caldwin said:
and honestly, aside from the movie and the video game, I've seen very little qualitywise to bring me back.
Click to expand...

Citizen
I watched the movie, the first episode of Make Your Mark and I think like 2 or 3 of the YouTube episodes. I also read issues 1-5 of the comic.

The movie was good. YouTube did absolutely nothing for me. The comics... I stopped reading G4 because it just felt too shallow. G5 feels shallow and too reliant on G4 to stand on its own.

Make Your Mark...*sigh* Make Your Mark was actually pretty good. But the rest of the franchise at the moment just feels so overshadowed with mediocrity, I just can't get into it.
Z

Citizen
I"d actually say that first episode of Make Your Mark was actually it's weakest. I'd say it gets better from there. Although, if you dislike the G4 references, maybe it wouldn't work out on balance.

And the youtube show has it's highlights, too. I could probably pick out a handful of episodes that are above average.

But, again, if you're just burnt out, don't feel pressured to keep going if you just aren't liking it right now. It's totally understandable to have your interests wax and wane. Even if you're just done with the franchise, that's fine. It's just a TV show, after all. If you ever get curious about it again, you can always come back later. Goodness knows we're going to have a lengthy wait between "chapters" anyway. If you ever want to catch up you'll have PLENTY of time.
Last edited: Oct 5, 2022

Staff member
Council of Elders
Citizen
Make Your Mark gets way better after the first episode. The writing gets more focused and animation has a conspicuous jump in quality. I don't know what happened with the first episode. So far the rest of the show is not like that.