Citizen
Yeah, a lot of us just bring too much baggage with us when we should just be accepting that we're somewhere new.

Powered Convoy said:
Agreed. Teela was originally meant to be the Sorceress and her original toy was meant to double as the Sorceress's precursor, the Goddess. Her being the Sorceress is just getting her to where she is supposed to be for once.
Click to expand...

Yeah, I'm only a couple of episodes in, but I already like getting to see an aspect of Teela that's explored so little finally getting some spotlight.

Citizen
Does anyone know when part 2 of Revelations is being released?

Citizen
I just cancelled my pre-order for Mosquitor with BBTS. Found him at Target. BBTS just lost a couple sales from me this week. *shrugs* 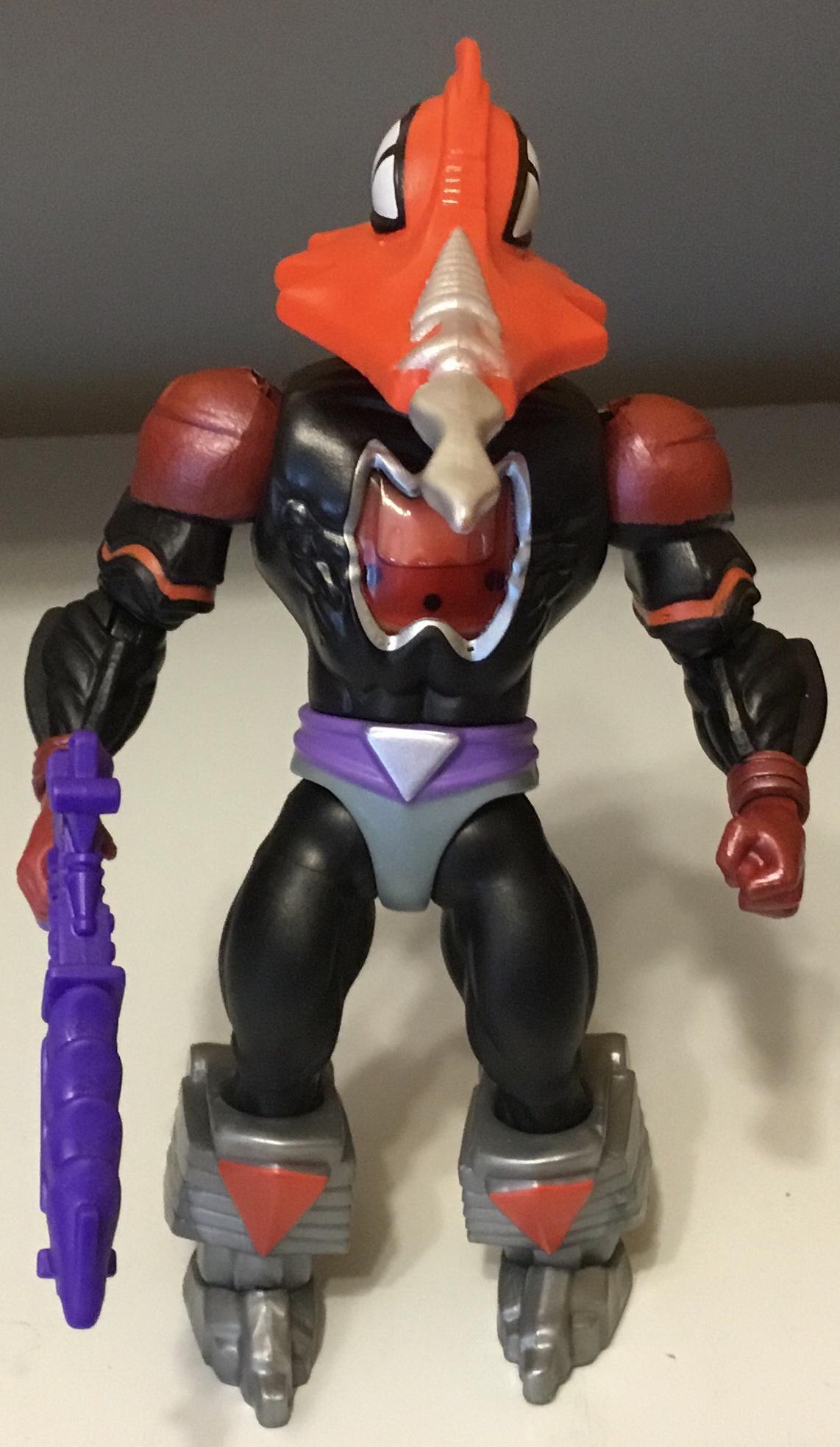 Here's the more classic look. The blood window was bigger on the vintage. But it's still pretty awesome here. 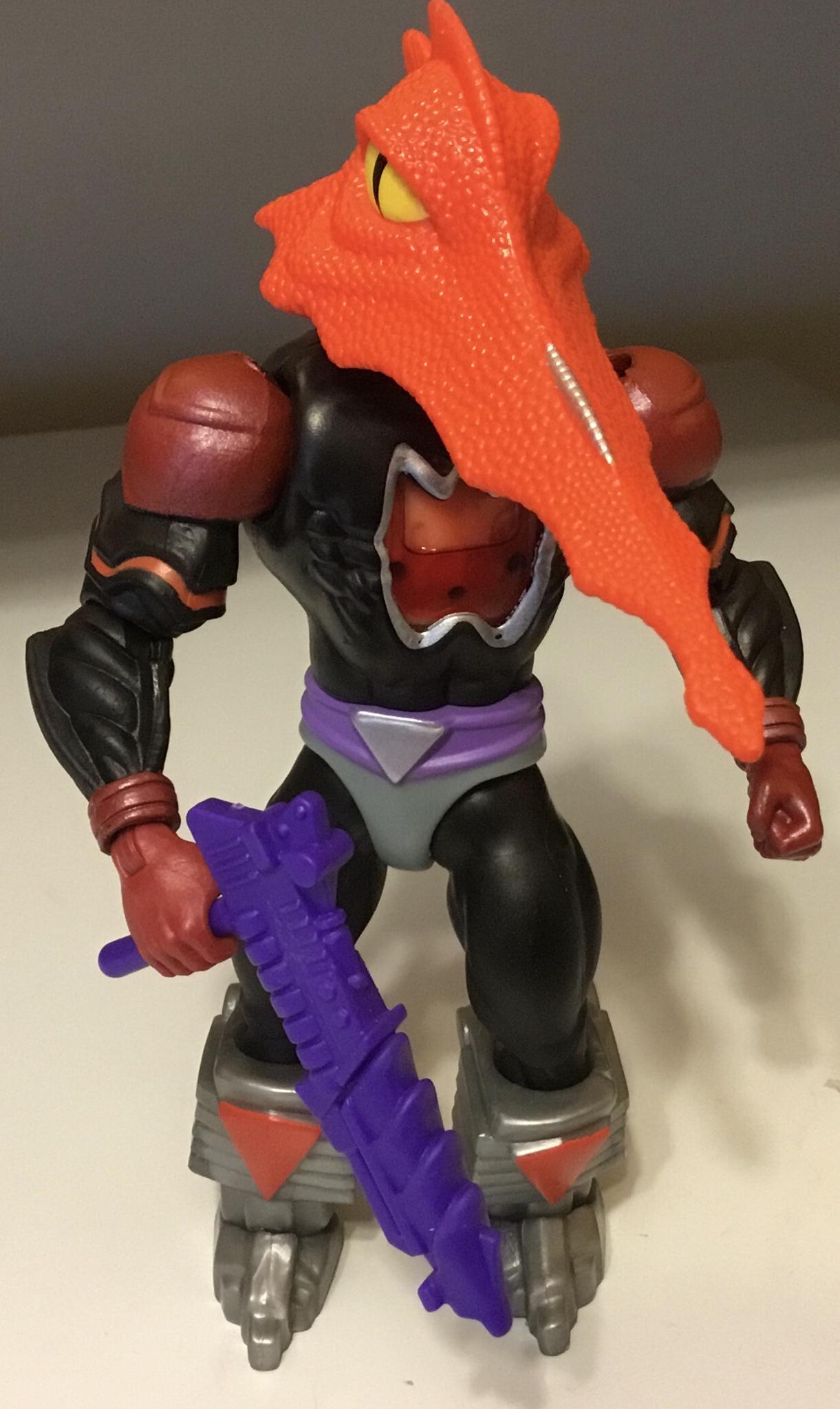 Here's the new head. I don't know which I like better. The original has more color to break up all the red. But I do like the texturing on this one. 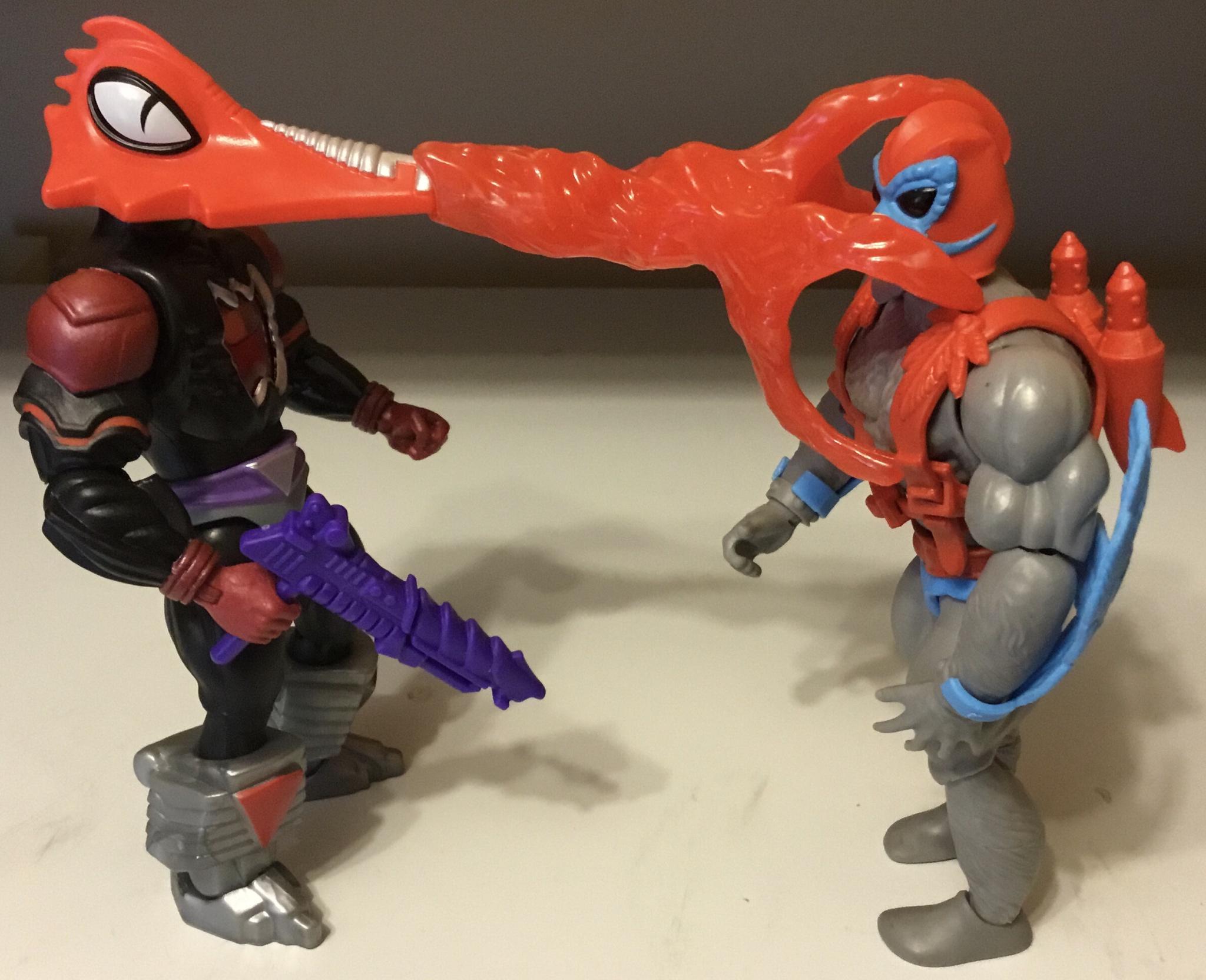 He came with a soul-sucking energy plastic thingy. That'll go right into my accessories box.

More to come when my Man-at-Arms arrives tonight from Amazon. 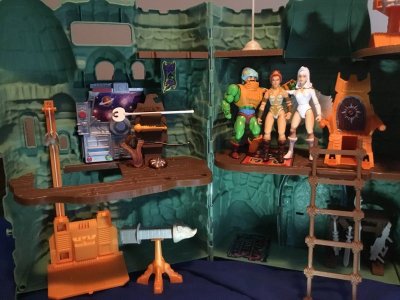 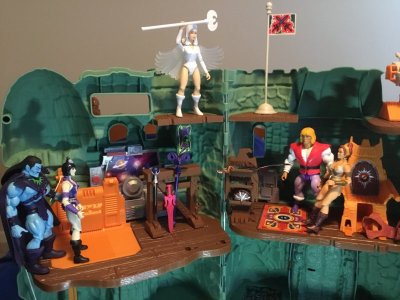 "You much all choose. But choose carefully, for today your choice will forever decide your destiny!" 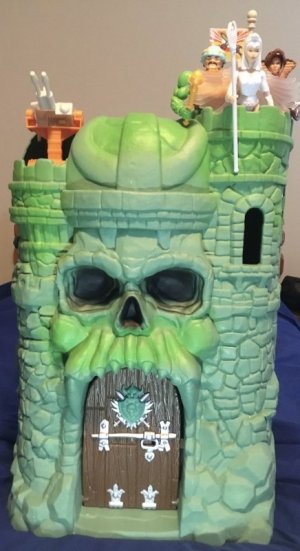 Citizen
I just watched the new "kiddie" Netflix show and it was great. I loved the "Anime/Final Fantasy Summoning" styled attacks and transformations, the jokes (such as Randor's "You had a new haircut!", Adam's distaste for "walking around in white tights" and the Easter egg about a certain faulty microphone in a certain lair...).

The use of a female "version" of Ram-Man, the increased screen-time for Teela, et al, reminded me of the other (equally as good, IMO) "adult" Netflix show, as it focused on the "Masters of the Universe" (or their opposite "Nemesis" counterparts) and allowed them all to "dial things down" to not allow us to get bored with their powered-up versions. It reminded me on how He-Man was largely absent from the adult show, possibly for similar reasons.

I can't wait to see more of both shows!

Citizen
Yeah, both Revelations and the new He-Man are great, honestly much more fun the any previous series. And I find it kinda amusing how similar they are to each other, following alot of the same broad strokes.

Citizen
My replacement Man-E-Faces showed up from Amazon and it’s much better. The head mechanism works and the paint is… acceptable. He has much more paint than my other Origins figures, so that’s probably why they look better. 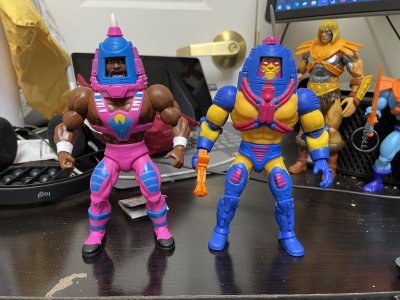 Citizen
Glad the replacement's better. It really is a nice toy (except damn that yellow). Is the one on the left one of those WWE Origins figures? I haven't really been keeping up with that.

Citizen
Yup, its the New Day figure. Based on Man-E-Faces, with each head being one of their three members. It came out a year or so before Origins Man-E-Faces and you can see they definitely refined the mechanism between the two releases.

Edit: I spoke too soon, the more I change the face, the stiffer the mechanism gets. It's definitely a flawed design. I ended up trying to return the replacement but they told me to keep it and they refunded me my money. I will throw him in a drawer or something.
Last edited: Sep 27, 2021

Citizen
I think this came up in the original thread but I was never aware until very recently that there was a whole thing about Man-E-Faces and the color of... whatever he has going on. I always though he was covered head to toe in some sort of hazmat suit deal, but then I found out there was a whole big faction of people who were like "no, he's naked, it's skin". Ah, here's some stuff. https://toynewsi.com/13-16984

Man-E-Faces figure has a bit of a deco dilemma. The original cross-sell image of the toy on the back of the package showed Man-E-Faces with flesh-toned skin with blue armor. But the original toy didn't match this and shipped with orange skin, which most fans have interpreted over the years as an orange skintight suit (much like Man-At-Arms wears a green skintight suit).

We checked with some of the original Mattel designers and indeed the orange color on the vintage figure was intended to be flesh-toned, but back in the day, our partners in China had a hard time matching the tone and he came out orange!

Most fans have memories of him having an orange suit (or orange skin), especially when you consider his human face was flesh-toned! And even more so, later figures of Man-E-Faces (such as the 2002 figure) were done with purposeful orange skin/suit, so there is a lot of precedent for this color as well.”
Click to expand...

"You much all choose. But choose carefully, for today your choice will forever decide your destiny!
Click to expand...

Keldor seems... distracted by the view.

Citizen
Huh! That actually was totally unintentional. But hey, you already know he chose poorly...soooo...probably shoul've been listening.

Citizen
Got my Masterverse wave 2 and Faker in this week. Sort of hoped that in hand Spikor would wow me, but no, he's exactly as dull, ugly and pointless as I expected him to be. It baffles me that he took a slot that could have been given to... well, anyone else, but really where's Orko? Fisto got as much screen time as Spikor but at least Fisto was Fisto... Spikor isn't Spikor. I'm not surprised they didn't bring Andra forward, because heaven forbid we have two women in the same assortment. But the list of appearing characters I'd have preferred over Spikor... if we just stick to characters who haven't been announced for the line yet I'd sooner see Clamp Champ, Roboto, Whiplash, even Blast Attak is more interesting. Even Randor or Marlena would be better, but see previous comment re: Excessive Women with regard to Marlena and the Sorceress. Even Clawful, who also wasn't in the show, would have been slightly more interesting to me.

The other three are pretty great. I wanted to love Teela but she's just shy of perfect. Like many of the dudes in this line, she has a frustratingly vacant expression. Her flimsy little baby hands don't look like they'll last long if she uses them for anything. On the whole she's really nice though, but I wish that in addition to Stronger Ones, she had more hands. I never cared for alternate hands in the past, but Masterverse has taught me to love them. EVERY action figure should have, at minimum, a pair each of open, gripping, and fist.

Beast Man and Duncan are not terribly exciting but they're both really solid toys. I just really wish we could have had at least a non-helmet head for MAA, anything to lift him above his lonely mace and/or push him towards a specifically Revelationy look.

Faker I haven't dug into yet, but if ever a toy could seduce me into keeping it in package, it's Faker. He looks damn good in that box. On paper I find him frightfully dull, but I just adore this whole line.

Citizen
I wish Revelations would remember Two-Bad. Always one of my fav MOTU designs.

Staff member
Council of Elders
Citizen
So we watched the first four episodes of Netflix Heman, and we like it! It looks like the next episode is going to introduce orko! Looking forward to it.

Citizen
I love the wordplay, and I love the character, but I hate her "solve problems by running into them with your head" attitude and how it seems to be condoned so far (still only 2 eps in), before she even gets her powers.

This isn't the '80s anymore, and we know a lot more about concussions now, and I really don't think that's a great thing to be encouraging kids to do.

Citizen
I mean, I understand where you're coming from...but at the same time Ram Man has been a big franchise character since the 80's. And ramming is a pretty core part of the character. It's in the name.

So aside from just dropping the character completely (which would probably make a bunch of long time fas not happy), not sure there's really much they could do to change it.

Maybe one special episode where she's in a situation without her helmet and spends a couple episodes in medical care?

I do remember one of the 80's post episode "the more you know" bits having Ram Man explain that this is a show and that kids shouldn't try to do what he does.

Citizen
Krass Ram Ma'am just reminds me of Gogo Tomago from the Big Hero 6 movie (I haven't seen the tv show so don't know her development there). Since she's pining for Adam here, let them be the eventual pair up. Sorceress Teela Duncan or Fisto.

Btw, the Dark Masters counterparts are pretty much set but with Beastman being Battlecat's enemy, who is Ram Ma'am's opposite foe? It will obviously be someone linked to the death of her parents.

OG Ram Man never had an Evil Warrior with a similar spring gimmick, right? (Ala Fisto and Jitsu.) Did a Princess of Power have a ramming copy too? (Ala Man-E-Faces and Double Trouble or Sy Klone and Spinnerella).