Citizen
I have no objection to the flight stand, but I'm more interested in the cannon from the first tier.

Citizen
Same here. Unless the third tier turns out to be something really worthwhile, I'll be content with just the first tier met.

Thanks to @Onyx Minor for the pictures

Thanks to Allspark Staffer OnyxMinor, we now have pictures of the HasLab Victory Saber prototype that is on display at the Dallas Fan Expo! Victory Saber is currently past 8,000 backers, but needs …

Citizen
His helmet is mistransformed.

Staff member
Council of Elders
Citizen
How can you tell?

Citizen
Faceplate is flipped up, can't see his eyes.

MadameVixen said:
How can you tell?
Click to expand...

Because someone at Hasbro transformed it...

MadameVixen said:
I thought the mistransformation was the victory leo legs do to the fact the prototype is fragile
Click to expand...

There can be more than one mistransformation. His helmet was transformed correctly in previous photos and images.

Staff member
Council of Elders
Citizen
I still haven't committed to buying one yet. I was back and forth on it since the character really doesn't mean anything to me. I am running out of time to make up my mind though.

Kup said:
The thing I've been hoping to see, and haven't so far, is a size comparison of Victory Saber against another toy. Using Hound in the video reveal was nice, and Star Saber looks big (leader sized?) compared to Victory Leo.

I doubt they're Omega Supreme sized when combined, but maybe Jetfire?
Click to expand...

I think they said he was Jetfire sized when combined. And I’m fine with that. Titan sized would be way to big IMO.

my only issue with it is give me all the guns and sword the G1 figure came with. Don’t make those available because enough people sign up.

Citizen
wow. a stand as an "expansion". thats what, $10 worth of plastic that could be thrown in at the base level. hasbros going all out for this one! im surprised it hasnt already been funded with that glorious reveal

Telly said:
wow. a stand as an "expansion". thats what, $10 worth of plastic that could be thrown in at the base level. hasbros going all out for this one! im surprised it hasnt already been funded with that glorious reveal
Click to expand...

And a cannon that should be included anyway. A stand makes me think there are stability issues.

Darth_Prime said:
And a cannon that should be included anyway. A stand makes me think there are stability issues.
Click to expand...

The stands seems to be for combined Jet/flying truck mode than robot mode, so far, all of the pictures show the prototype standing unaidded but then with the prototype we keep seeing, we don't see much of Victory Leo in robot or lion mode!

Darth_Prime said:
I think they said he was Jetfire sized when combined.
Click to expand...

This got posted a couple pages back. Once he has his Leo boots on, I think that's about right. 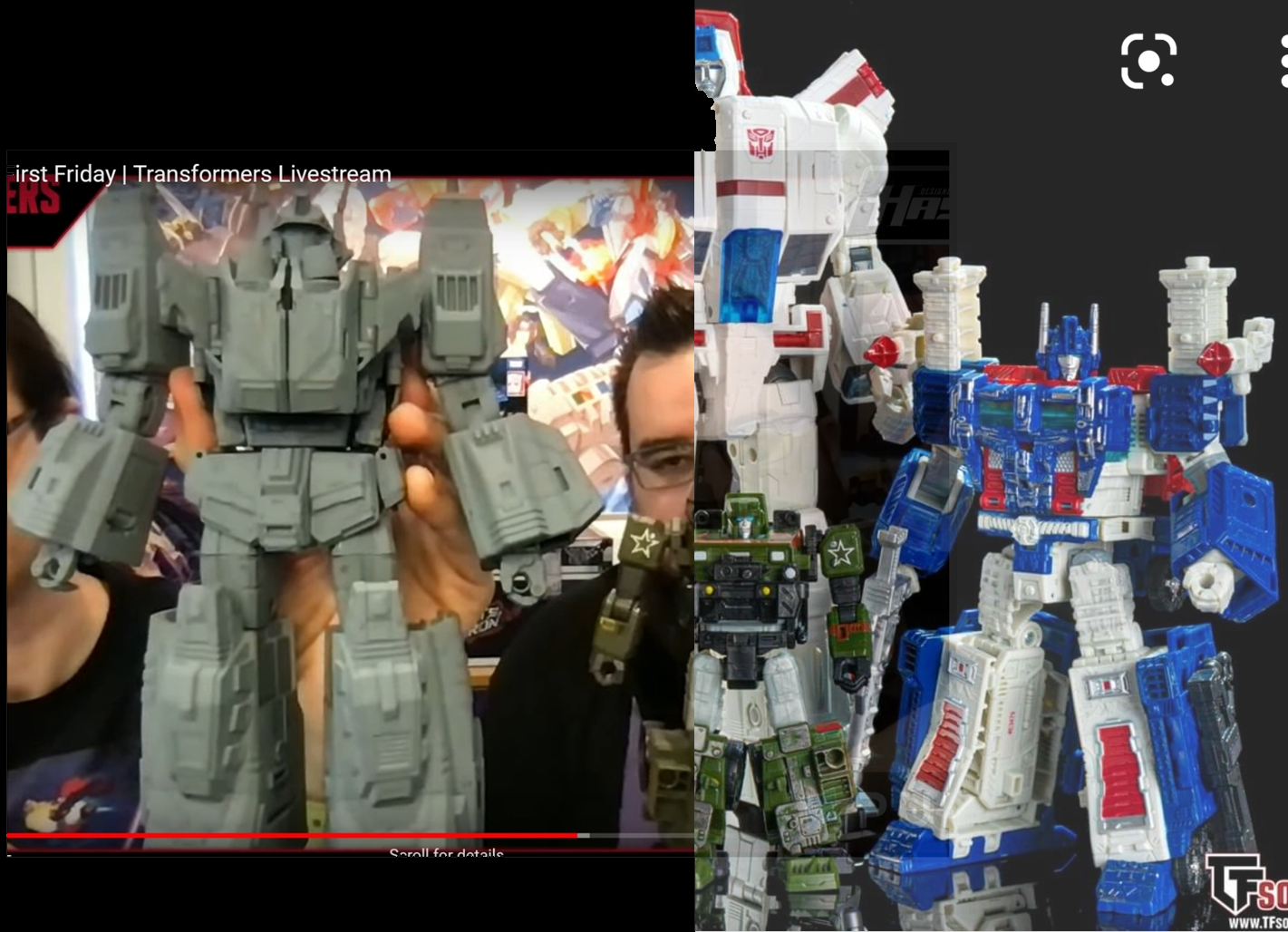 Because I'm a glutton for punishment, I started to see if I could make some comparo shots with other stuff based on the old scale charts out of the Complete Ark... and then I gave up.

The Victory scale chart isn't even in scale to itself (the first 10m line is taller than the 2nd 10m line)! But since I took the trouble to get a handful of toys down, here's the dumb picture I took.

In G1 scale, Prime was 6m tall. In the movie and Victory scale charts though he got embiggened to 10m. The Victory chart shows that Overlord clocks in a hair over 20m tall (so the toy is way too short - but different line, yada yada yada), and Victory Leo is taller still at roughly 23'ish m. (I threw in Galvatron and Cyclonus just for reference as based on the movie chart - toy Galvatron is a hair too tall and Cyclonus a hair too short using Prime as the standard).

Anyway, all this shows is that the Victory Leo toy should be the size of Jetfire at a minimum as Jetfire's roughly double Prime's height on the old chart, which means this Prime and Jetfire are more or less in scale with one another in bot mode (fun trivia: I hadn't noticed before, but the G1 scale chart shows a cartoon design of the Macross version of Jetfire not the Skyfire model actually used - I didn't know they'd actually done this). Of course absolutely none of this actually tells us anything about the toy's actual size compared to any of these figures.

Basically - this was all just a big waste of time.


Superomegaprime said:
The stands seems to be for combined Jet/flying truck mode than robot mode, so far, all of the pictures show the prototype standing unaidded but then with the prototype we keep seeing, we don't see much of Victory Leo in robot or lion mode!
Click to expand...

A flight stand was a stretch goal for the Razor Crest too (though it was the 4th unlock and clearly a last minute addition). I agree it's not super exciting; there is obviously design, engineering and materials involved, but in this case it's hard to imagine it's 54,000 extra bucks' worth.
Last edited: Sep 21, 2021

TRANSFORMERS on Instagram: "#Transformers fans, mark your calendars for an interview you DON'T want to miss! TODAY at 2:00pm ET, Transformers team members Evan and Amanda will join voice actor @christophersabat to discuss the latest Transformers #Has

Citizen
I feel like the market for an English dub of Victory would be extremely small and basically relegated to a subset of Transformers fans who want to watch Victory but don't want to have to read subtitles tbh.

Not exactly something I could imagine selling that much, but hey stranger dubs have happened.